The Guardian of Guangzhou 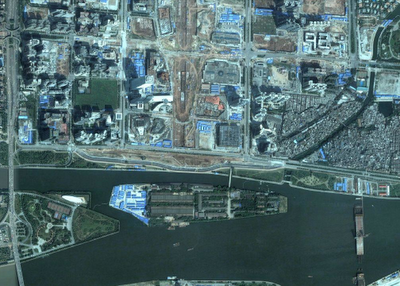 THE BANKS OF THE PEARL RIVER, GUANGZHOU.

Peter Kelly's curious diatribe in Blueprint late last year is a weakly-argued disgruntlement by a professional print journalist toward bloggers, blaming them for their lack of formal criticism of new architecture, as most chose instead explore niche topics or personal interests.

In response, many so-besieged bloggers have aligned themselves with a general dissatisfaction of the state of current architectural criticism, in which many print critics seem wedded to the public relations arms of celebrity architectural offices, real estate developers, and government, and are accused of being either adolescently star-struck, or agents in a larger power brokerage, of which the newspaper as a whole is part.

With this debate on-going, it is all the more remarkable to have Jonathan Glancey of the Manchester Guardian file simultaneous print and video reviews of a large project by a major architect: global hyperstar Zaha Hadid and her recently-opened Guangzhou Opera House in Southern China. These twin adorations, with the print piece embarrassingly headlined, "Move over Sydney!" perfectly exhibit the pathetic state of architectural journalism, which has so engendered starchitect hagiography in general and the Zaha-worship in particular.

Both the video and article don't offer anything remotely technical, other than reporting that the acoustic designer helpfully declares his own work to be "perfect." Even for a popular, non-professional audience, the absence of any level of specific performative analysis is astonishing. Its as if music were reviewed while avoiding all mention of the instrument's harmonies or the singer's pitch, or if a film was reviewed while excluding analysis of the camera work or editing.

Its one of the most remarkable buildings not just in China, but in the whole world!

Jonathan Glancey says virtually nothing specific or meaningful about the architectural design, and says a lot that makes little sense, be it either helplessly vague or annoyingly cliched. Glancey's verbage is a parade of contemporary architectural bromides, kicking off the video with the hugely-dated metaphor that a particularly unusual architectural form was built by an alien civilization. Elsewhere he compares the building to a bolt of lightning. He variously characterizes the "geometry" as either impossible and gravity-defying.

Where on Earth or in space is this otherworldly monument?!

Most ignominiously, Glancey repeats, almost word for word, the architectural office's own PR metaphor for the structure: a typically empty comparison of the opera house to a natural phenomenon:

From Simon Yu of the ZHA project team: "“We liked erosion and stones. It worked well next to the Pearl River. The metaphor is two pebbles picked from the bed of the river and placed on the river bank.”

From the ZHA press release (via Dezeen): Shaped to resemble two pebbles on the bank of the Pearl River, the building houses a 1,800-seat theatre plus 400-seat multifunctional hall, rehearsal rooms and entrance hall...Like pebbles in a stream smoothed by erosion, the Guangzhou Opera House sits in perfect harmony with its riverside location.

From the Guardian: Set in Haixinsha Square, a brand new stretch of south China's ever-expanding trading city, the opera house takes the form of what appear to be two enormous pebbles that might have been washed up on the shores of the Pearl river, on which Guangzhou stands. Rough-shaped things sheathed in triangles of granite and glass protrusions, one houses the main auditorium while the smaller encloses a multipurpose performance space.

From the Video: "...Rest like Giant pebbles on shore of pearl river. They act as the cultural anchor of massive development of new financial towers..."

In one of the most revealing moments of the video, Glancey, standing head-on to the camera on an upper level balcony high above the "gravity-defying foyers", seems to apologize for the roaring din of the intermission crowd mingling below ("Its very loud…but its supposed to be…its an opera house," he says in a high, contrite tone), as if his slight frame could censor whatever auditory flaw he perceives to need masking.

Sometimes, just sometimes, architecture makes you want to burst out into song! ...the building behind me does all the singing you'll ever want!

The view behind him, through a massive, irregular space, is an extremely intriguing one, and the noise could be either a purposefully or unintentionally enjoyable experience, but Glancey neither asks Zaha (or the acoustics consultant) about this effect, nor gets out of the way to let the camera lean over the balcony for his audience. In this way, not only is it not clear what there is in the building to dislike, there isn't even a very good expression of what may, at least within the realm of possibility, be some effective or enjoyable aspects of the architecture.

Very nice? Its a bit more than that! Its a truly radical design!

This can't even be called criticism. There is no portion of the reporting that lets up even momentarily on the blood-rushing, exhilarating promotion of the subjects at hand. There is no point where he criticizes the building.

The building, even when empty, has this quality of being restlessly alive.! 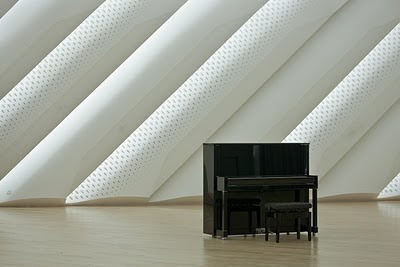 Image courtesy of the Guardian by Dan Chung

With its speedy editing and great number of dark night shots, it is difficult to get a visual sense of the form of the interior or exterior of the opera house in the four minute video, its pop-synth soundtrack not withstanding. Redeemably, the Guardian's 20-image slideshow provides a much more thorough visual understanding of the space, but Glancey's own works remain confusing. But providing an understanding of the architecture is not the point. Even more than the building itself, the purpose is to promote the personality behind it.

Even Zaha seems dazzled by the result!!

Tellingly, there is as much face time on the clip as there are shots of the new construction, whether inside or outside. In four minutes of video, the viewer has more time to examine Glancey's teeth and Zaha's leathery complexion than gain a spatial understanding of the building.

Glancey's breathless, hyperbolic intoxication isn't just hilariously over-enthusiastic, but is actually detrimental in several ways. Glancey is obviously drunk on both celebrity-workship and signature form-making. Aside from his floor-licking veneration of Zaha and her opera house, one of Glancey's main points is that the citizens and leaders of Cardiff, and Britain by extension, are pathetically timorous and myopic to have not done whatever it took to get a Zaha building. As if a Zaha Opera House=Zaha Opera House (even the Lauraete herself had to chide Glancey mildly for this view), and more broadly ignoring whatever political or fiscal context the Cardiff Opera House project had to navigate to work. Glancey exhibits no concern for this.

Guangzhou's gain is Cardiff's loss. Zaha Hadid is a trailblazer! But the trail she blazes so very brightly has still to light up British towns and cities... Zaha had hoped to built an opera house like this years ago in Cardiff Bay in Wales, but an unholy chorus of dim local politics and cultural philistinism wrecked her plans.

While Glancey mentions how the Opera House anchors a new district of this enormous city, there is almost no visual or verbal exploration of this. More specifically, the social, political, and economic milieux in which this Opera House was solicited and realized is almost entirely ignored. Glancey flatly states: "this extraordinary building has been a very big event in China," as vague and meaningless as any of his other declarations.

Although its appeal will be global...it is built very much for local conditions.

In fact, it is left to a completely non-architectural journal to cover these issues at all: it is only by happening to read a column in the Financial Times--but not by its architecture critic Edwin Heathcote, but its South China correspondent, Rahul Jacob-- that the larger context of still-impoverished China, with Guangzhou its Dickensian factory-opolis, is incorporated into a discussion of the building:

This conundrum – of an opera house that cost more than $200m to build but has the concert schedule of an institution flailing financially – might seem baffling at first but it is emblematic of the problems facing China. It has a government that is eager to spend lavishly on trophy projects such as high-speed railways and concert halls but not always the will to manage the minutiae of ensuring that ticket prices are affordable or that programming is adequate.

The GOH is the most extreme example. “You have the GOH with no [resident] symphony and no opera chorus,” says one observer. “Beijing and the local government pitched in to build the opera house but when it comes to programming the attitude is ‘You mean we have to pay for that too?’”

Instead, Glancey closes with a bang:

Not so much avant-garde as Avant-Guardian. At least he didn't blog about it.

A tweet from Dwell Magazine, linking to Glancey's video in the Guardian.
Posted by MM Jones at 3:08 PM