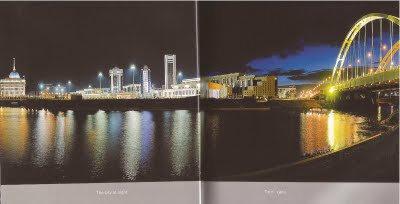 Here are a series of scans from a booklet, Kazakhstan: Land of Wonders, published by the Government of the Republic of Kazakhstan in 2009 and distributed at a promotional event at the Kazakh Embassy in Washington, D.C. (Apologies for the low quality of the scanning). 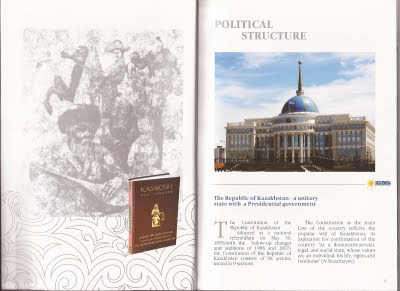 "The Republic of Kazakhstan - a unitary state with a Presidential government"

The glossy handbook is an introduction to the achievements and enticements of the state, attempting to interest tourists, and more importantly foreign investors, to the Central Asian country, which in the post-Soviet period has enjoyed enormous dividends due to the mineral and energy deposits within its vast territory. 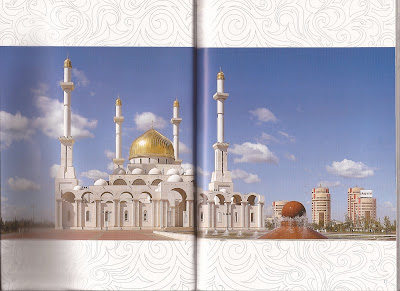 This windfall has allowed the post-Soviet regime to devise an entirely new capital, Astana, a city masterplanned by Kisho Kurakawa. President Nursultan Nazarbayev decreed that the capital be renamed and removed to this remote hamlet in 1998, and construction has been on-going since. 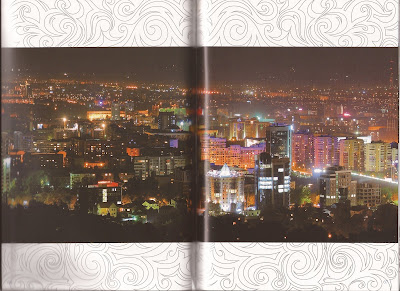 A remarkable aspect of the booklet is its promotion not only of this fanciful, glittering new Brasilia on the steppes through a series of photographs edifying the neo-islamic, plastic-paneling and cobalt-blue opaque glazing scheme of the country's new mosques, apartment towers, office complexes, and government ministries. 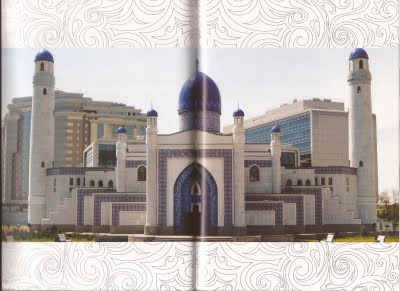 Whereas some of this is evidently an attempt to forge an architectural identity for this young state, a land of an ancient, nomadic civilization, which for some time has had its islamic faith (and continues to have its political freedoms) repressed, much of the construction is strikingly reminiscent of the Soviet monumentality of its former client state than might be expected. 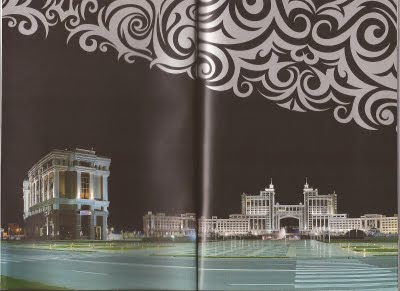 The vast, glistening plaza in central Astana is gated by the immense State Gas Corporation building, KazMunaiGaz, (above), which, with symbolism that maybe only partially intended, is the only construction to transect the monumental axis of the city's new administrative district. Its also unclear how much the architects intended the similarity to the Atlantis Resort in the Bahamas (of course without the coral reef and shark tank), or, geographically and politically more related, Palace Square in St. Petersburg. 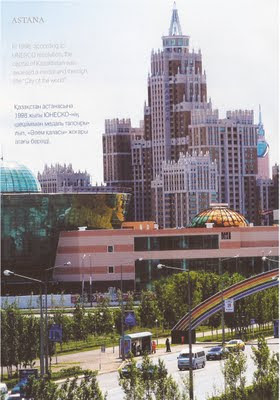 As if the new city couldn't be more reminiscent of its former Imperial Power, Astana also has a close copy of Moscow's Seven Sisters. The feel of 21st century Moscow is further embodied in that these Stalinist creations are surrounded by the cheap, gaudy shopping malls at their skirts. 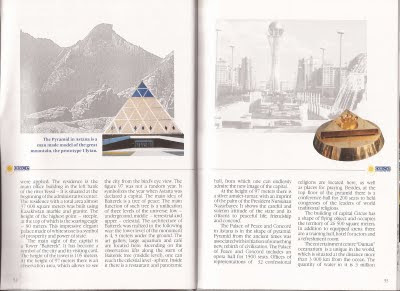 "The impressive elegant palace made of white stone is a symbol of prosperity and power of state."

Astana has among its "most stunning" landmarks two works by Norman Foster & Partners. One, a metallic pyramid, has been labelled the Palace of Peace & Reconciliation, and lends itself most naturally to large international conferences. The other, which is also the second tallest building in the city, is a humungous leisuredrome, the Khan Shatyr, the world's largest tent, which includes an indoor beach so that bored bureaucrats can seek shelter from the merciless climate. (link to an excellent article, Foster in Kazakhstan, by Richard Orange, in Blueprint, 2010.) 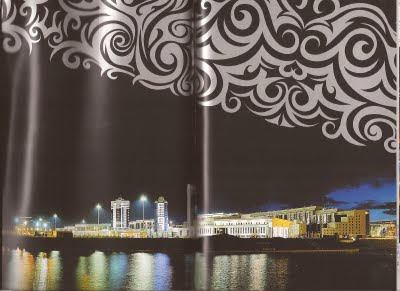 It would certainly be possible to write a more extensive post about Astana, one of the greatest examples of the contemporary intersection between autocracy and starchitecture, but I really only intend this to be a brief post about the photographs in this booklet, and not only what they show of this developing country and its flashy capital, but also what the images reveal about the marketing of Kazakhstan as a destination for foreign tourism and capital. 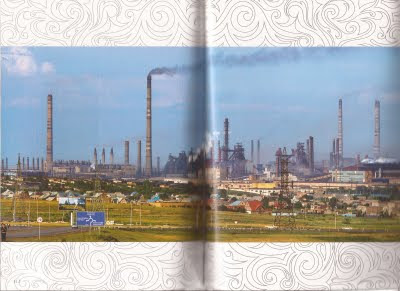 What may be more notable than all the spreads of windy, glistening Astana, then, is a two-page panorama showing some sort of belching smelter plant blotting out the horizon. It suggests influence of both an older Socialist-Realist tradition of edifying Industry, but also a more neoliberal, emerging-economy inclination to boast of a country's economic capability--and is wholly ignorant of any aesthetic and ecological considerations. It would hard to imagine a European nation or American state billboarding its farting smokestacks to entice foreigners to visit. 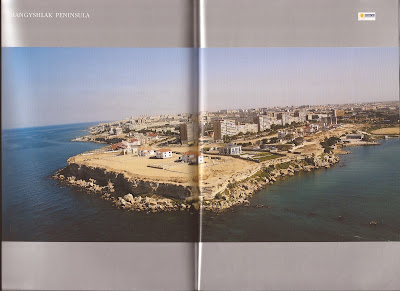 Further in the handbook is another wide-angle shot of the Mangyshlak Peninsula, lapped by waters less neon and opaque than the new ministerial skyscrapers of Astana, is nearly postcard picturesque. Yet upon closer examination the photograph, surely captured by aircraft, implies some more complex economic forces at work. In the middle of the photograph, proletariat housing piles, too low to break the horizon stand back from the cliffs at the center of a planned settlement, while the waterfront property seems newly-occupied by enormous stucco-and-tile Malibu-Mediterranean McMansions sprouting half-complete out of the sandy precipice. At left, a luxurious, glittery-blue Esfahan-meets-Arizona estate centers on a lush tapis vert cascading down to the Caspian.