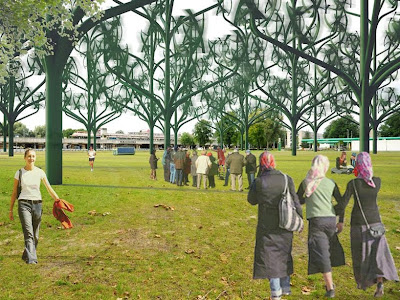 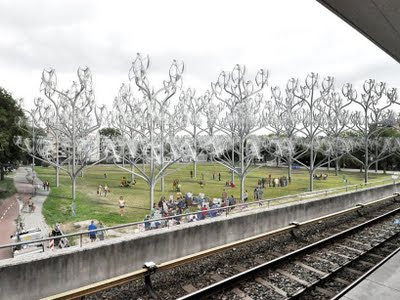 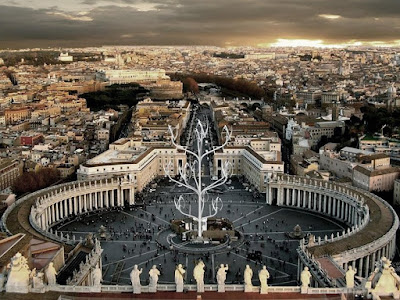 Above three images courtesy of NL Architects via Designboom
I tend to avoid arguing about architectural beauty, in part because tastes are ultimately subjective, and also I like a lot of buildings that other people consider to be ugly. But in this case, I strongly question not only the assertion that the above proposal is really any more attractive than a regular wind turbine, but that the standard wind generation apparatus is, in the scope of what we install on our landscape, at all worthy of demerit. 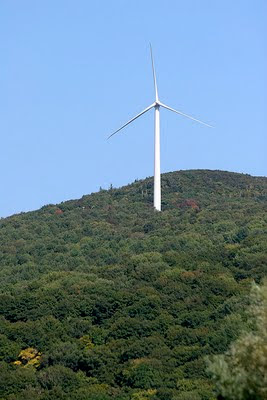 Image courtesy Flickr user Swerz
As the FastCo. post mentions, the expanded utilization of wind power technology has been hampered by aesthetic arguments. Turbines are deemed by a large segment of the public to be hideous: a disfigurement of our bucolic countrysides. This argument is especially prominent in the United States, no more so typified than by the vicious, decades-long fight over the Cape Wind project in Massachusetts, which has been the subject of much press, including a book published about five years ago. 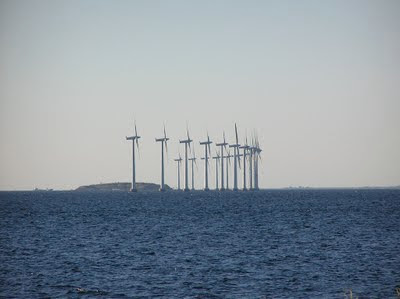 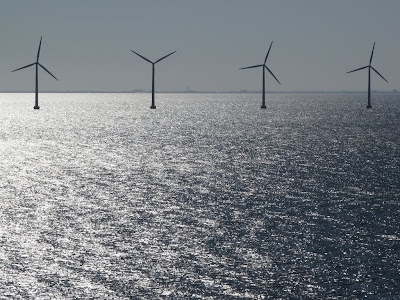 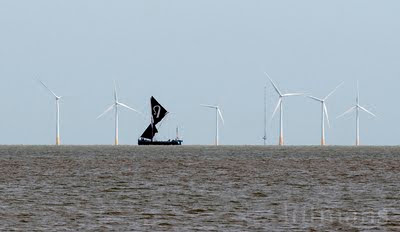 Image courtesy Flickr user Lutmans
Why is it that individuals have singled out wind turbines as the scourge of our contemporary landscape? Although strip malls, parking lots, and McMansions certainly have their detractors, none has been deemed so repellent that their introduction into our built environment was in any way seriously disrupted, compared to the insane histrionics associated with wind projects. 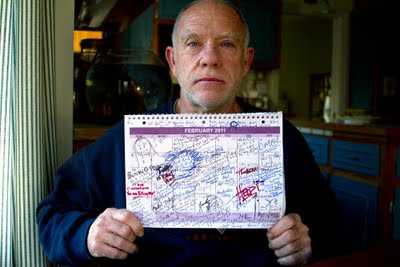 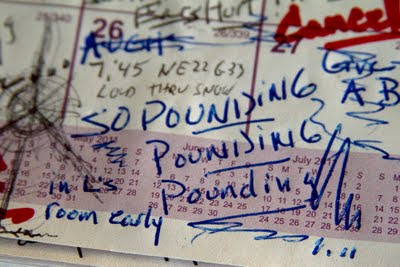 From this bizarre anti-turbine story.
Original Caption: "From his kitchen table of his Falmouth [Mass] home,
Neil Anderson holds the calendar where he and his wife record
their daily reactions to the wind turbine located nearby."
How scientific!
Images @Jess Bidgood/WGBH
While certainly wind turbines create noise, and stick up out of the ground in a noticeable manner, its mysterious how they invoke such fervent vitriol. Even when just considering the infrastructure of our power utilities: transmission lines, stretching to the horizon, upheld on the shoulders of humungous metallic skeletons, have been with us for close to 100 years. Has there been any public debate of this? Perhaps so, before my lifetime, the appearance of the monuments to distributed power across the country was challenged valiantly. 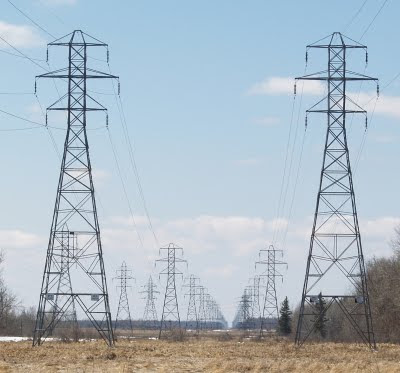 Image courtesy Flickr user theclyde
Like wind turbines, the fossil-fuel powered generation stations pierce the skyline in their own way. In the Cape Cod community of Sandwich, in the same county as the Cape Wind project would be, is the decades-old Mirant power plant, sitting right on the ocean, visible for miles along the beach, its stacks rising above the scrub pines and sand, and looming in the background of the multimillion-dollar views, pumping out emissions. 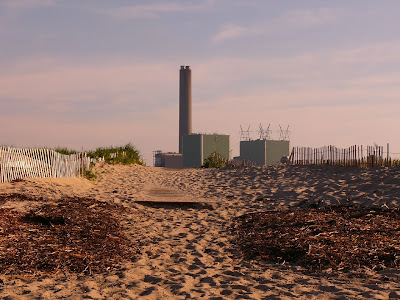 Image of Mirant oil-fired Power Plant, Sandwich, MA
courtesy Flickr user MRTGT
If there was any resistance to the initial construction of this belching behemoth, evidently at some point the population came to accept their own needs for reliable energy, and accepted this visual intervention, with all that the wind carries to their property.
But this has all happened in less-enlightened times, perhaps. Maybe these hideous necessities have built up the resistance to further visual reminders of our technological requirements, with contemporary society just not taking it any more? 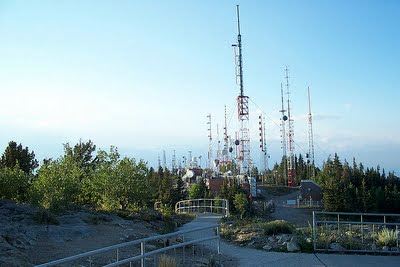 Image courtesy Flickr user poplinre
Yet, these recent times have been an era in which an entirely new technology has spread around the globe, requiring the installation of countless points of infrastructure on the land: the adoption of mobile phone technology, which has bequethed upon our contemporary landscape the cell tower. 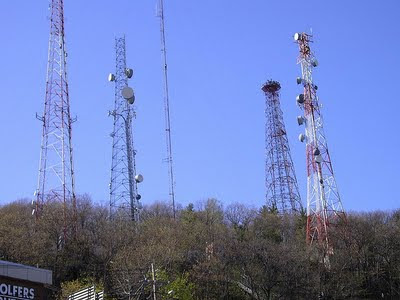 Image courtesy Flickr user Mark Sardella
Not that aesthetic complaints have been absent from this profusion of transmission towers. However, this has bizarrely resulted in the new typology of the faux-tree cell tower, with its subspecies, the faux-palm and faux-cactus tower. Outsized plastic evergreens, welcomed into our communities; deemed acceptable. 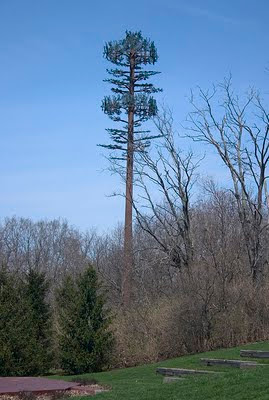 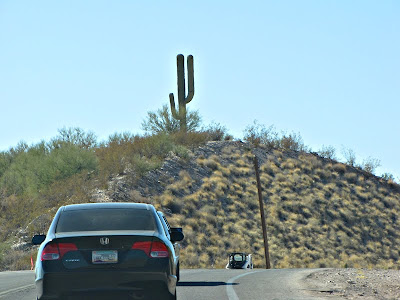 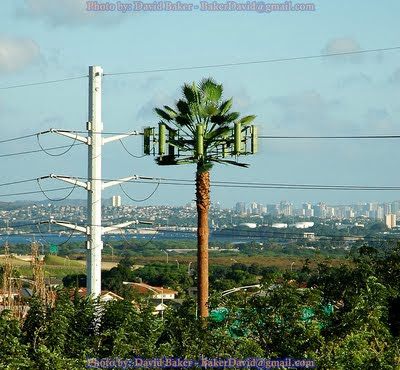 Image courtesy of Flickr user rust.bucket ©David Baker
If wind turbines are not entirely welcomed, neither are they universally loathed. Despite the resistance within the United States to their appearance, they are becoming increasingly common here, and are widespread in many parts of Europe. A symbol of progressive ecological sensitivity, turbines have been cleverly employed by marketers to signal environmental responsibility and cultural cool to certain consumer segments. 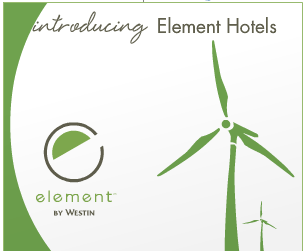 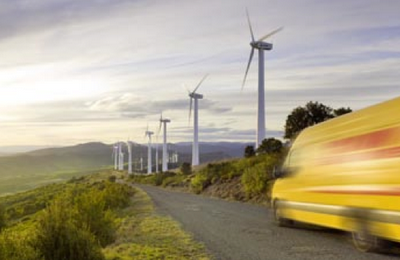 Global Parcel Shipper DHL's "Go Green" PR campaign features
wind turbines prominently in its literature.
Without ignoring the real detractions of turbines, with certain auditory and visual shortcomings, or being naïve to the stronger political and economic influences that support resistance to cleaner energy technologies, a reality that was brilliantly mocked recently by the Onion, I remain astonished at how unpopular wind turbines are among certain constituencies, and the aesthetic arguments used to support them.
If I were to argue on the aesthetic merits of the wind turbine, I would assert that they are sublime, romantic, and soothing, bringing an elegance to human electrical-production. Their metronomic cartwheeling, the blades pulsing like the beat of the human heart, openly evince the harnessing of clean electrical current from nature.
Posted by MM Jones at 2:01 PM