Ten years ago, talk of rebuilding was already underway. Some proposed a literal reconstruction: the ultimate act of defiance, it was argued, would be to replicate exactly what had been there before. The World Trade Center would rise again.

This idea was never seriously considered by those who had control over the site's future. The merits were slim: the original towers never enjoyed the adulation they received in the afterlife. Their architecture was celebrated in visual eulogy, but the particular features of edifices, their mass, their facades, their positioning to each other and the ground, were still seen as commercial and aesthetic mistakes not to be revisited.

The program was different now, besides. That shadowy, windswept plaza had now become hollowed ground. Although the destroyed leasable office space, all of it, became an unquestionably essential element to any new construction, under the logic that guides the marking of a contemporary massacre, this could not be in the same spot, and was pushed outward. The center of the site, the erstwhile towers' lobbies, were declared the gravestones, to be visited by the busload. 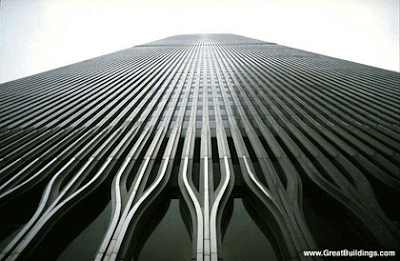 No buildings could go here: these square territories were to be preserved. The towers' footprints were re-excavated, almost as if such an exact rebuilding had begun but was abandoned. Two great holes had once anchored tremendous, thousand-foot volumes of air-conditioned, flourescent-lit workspaces and their interstitial utility corridors. The exterior was erased as well: the metal frame and skin would be replaced by water, cascading into air. 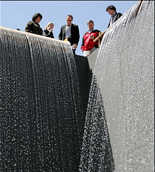 Yet, in a wonderful and unexpected result, the unloved, derided architecture of the towers, returns in memoriam. The jets of water that are the essence of Reflecting Absence mirror perfectly the World Trade Center's signature surface. What was once static metal is now kinetic fluid. The solid is void, yet those former spaces between the ribbons of aluminum strips on the faces of the towers have been molded into strands of liquid. 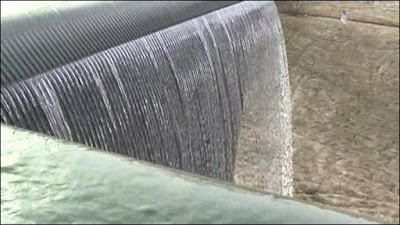 
Perhaps the most striking thing when the mock-up came into view, nestled incongruously in a suburban setting, was that the water walls were not the "thin sheets" described by the design jury that chose "Reflecting Absence" last year.
Rather, they were more like beaded curtains, with a striation that called to mind the vertical bands of the twin tower facades, dissolving in a cascade of tears.