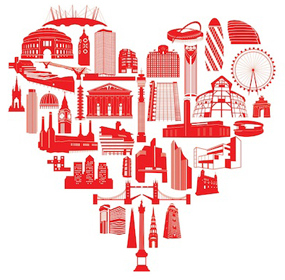 An icon for an Architecture for Humanity Valentine's Day charity auction, 2012.
Around 40 architectural landmarks are arranged to make a heart.
If the Shard is among them, it is the small, dark pylon at the bottom, underneath
the Tower Bridge, to the left of Nelson's column. The London Eye, the Gherkin,
Natwest Tower and even the Carbuncle Cup-winning Strata are more prominent.

It was actually not difficult to find favorable words for London's newest, tallest tower in the press leading up to last week's opening, but most of the platitudes emanate from the building's builders, backers, and its architect.

The opening ceremony, in which the Shard had frickin' laser beams coming out of its head, was actually a quite fitting metaphor for the building: somewhat cheesy, ostentatious, unoriginal, self-important, and unable to be avoided even far across London.

The Shard's baptism by beacons occurred in the same week as the "LIE-BOR" scandal oozed out of London and around the world, and the building's constant honorific--the tallest building in Europe-- is spoken in a period when the very word "Europe" is a source of anxiety in a way unimaginable a decade ago. Similarly, a metropolis that had long-since sold its Georgian squares to Kuwaitis, and its department stores to Egyptians, and allowed the Saudis, Russians, Qataris and others to own and build so much of the city, now see this foreign control as endless and out of control. It is a tower of luxury in a city and country divided by wealth and privilege.

And yet, here it is, London's newest tower, meant to be a towering symbol of London's continued relevance, renewal, and righteousness. Yet a comparison of the completion of the Shard with the arrival of the Gherkin less than a decade ago reveals two completely different receptions. The juxtaposition is an apt one: the Gherkin was the most prominent addition to London's skyline in years, and furthermore is just more glass-enclosed office space for foreign financial firms, like the Shard. Yet the very different regard for these two towers is remarkable.

The Gherkin, firstly, did not rise in a controversial area: The Gherkin rose in the existing business district, among a shiny cluster of financial office blocks that had walled off the City since the 1970s. It was not even the tallest spire among these, whereas the Shard looms alone over the streets of Southwark.


Even before it was finished in 2004, the Swiss Re: Headquarters was granted a giggle-inducting name of an edible delight that doubles as an erotic euphemism (although its true that some people don't regard the name as a mark of admiration and it is certainly true that funny nicknames are not given to London skyscrapers purely out of affection). And yet the Shard is not a nickname by the public and press: it is the official name of the building, a central aspect of its polished marketing. And while the Gherkin brings to mind salacious and sundry associations, a Shard of glass comes from the violent cracking of a pane, a shattering: its broken pieces sharp and skin-slicing: a horror-movie weapon, not a silly sexual slang.

If the appellation is just unimportant, the origin story is not, and the Gherkin is more British than the Shard will ever be. Designed by a British architect, a Lord no less (in a slightly more innocent, pre-MP expenses and pre-phone hacking era which had less disdain for the wealthy and more regard for Parliament). Even its address, St. Mary's Axe, was atavistic and adorable, suggesting both the christian shrines of the pre-modern City and the quirky serendipity of English geography (what other nation names an alley an axe?).

Finally, its swirling strips of climate-controlling rhomboid glass curtain recall the lead-paneled windows of Tudor timber-frames that the district once had, bridging its most futuristic feature with the ancient heritage of the area: the Gherkin managed to be both forward-looking yet quintessentially British (whereas the Shard has been accused of being not just Qatari but North Korean).

In this patriotic fable, the Gherkin embodied the core sentiment of London's fin-de-siecle self-satisfactory myth and self-congratulatory mood that swept over the city: London, ancient, creaking, damp, and increasingly diminutive, had remained atop the rankings of the most important, relevant, modern, and cool cities in the world. Indeed, London, long-past its prime as the capital of empire, had remained the center of the world.

Online Adverts for Iceland Express airlines, c.2009.
London is shown by Westminster Cathedral, the Tower, Big Ben, St. Paul's,
and most prominently the London Eye and the Gherkin.


It was that the Gherkin, along with its earlier contemporary, the London Eye, a similarly-circular and equally-visible contemporary, that were the celebrated as symbols of this triumph. Both were cute: a plump priapsism of late-cool Brittania exuberance, with the Eye as its sister iteration, a childlike-carnival ride over the Thames, just opposite Westminster. 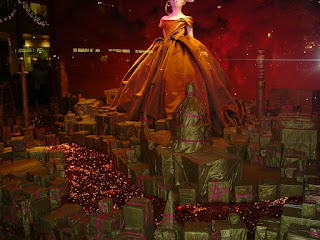 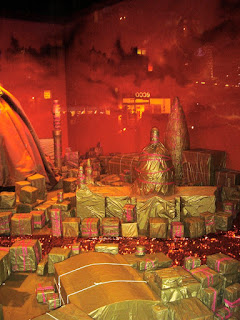 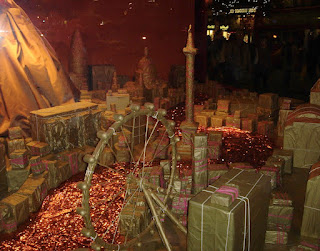 Landmarks they became, and symbols they remain. The Gherkin and the Eye took their place among the pantheon of London's architectural idols in print, posters, advertisements, and other media, joining its elders St. Paul, Big Ben, the Monument, and Tower Bridge. The Gherkin popped up across the visual landscape of London in those years, and still does today, in the constant graphic representation of the skyline, and by extension, a city and country enjoying a renaissance of its own ingenuity. 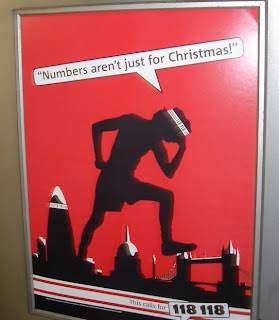 Above: An advert on a tube escalator, December 2005, showing
St. Paul's, the Gherkin, and the Tower Bridge. 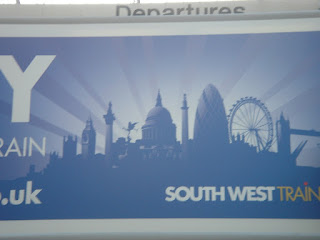 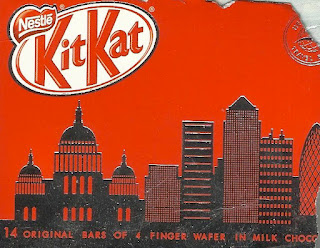 Above: A commemorative Kitkat bar box, c.2010.
St. Paul's, One Canada Wharf, and The Gherkin stand for London. 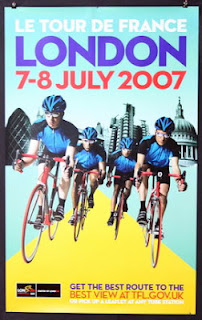 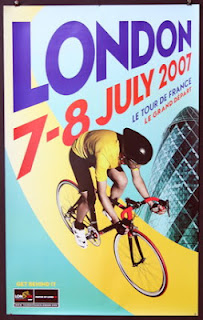 Above: two posters for the 2007 Tour de France in London.
The Gherkin is the most prominent landmark shown,
but Lloyds of London makes an appearance.

Quite awkwardly, the Shard has yet to receive such graphic laurels. The supertall was deliberately crafted to be an icon of the city, yet thus far there are hardly any outlines of London's skyline, whether within the UK or elsewhere, that include it. 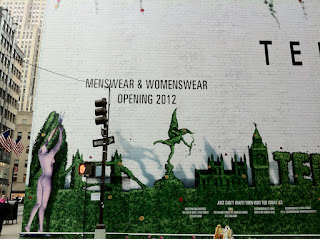 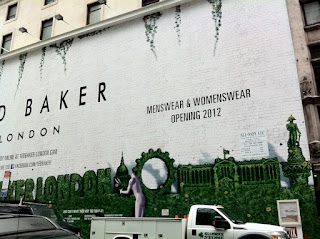 Even the hideously unloved Natwest Tower, the thoughtless trifecta of Canary Wharf, the heinously bizarre city hall helmet, and the long-loathed and utterly defunct BT Tower appear more often (interestingly, the 3-year old Heron Tower, officially the city's tallest but with even less to distinguish itself than the drab Natwest Tower, has not been adopted, either).But it is constantly the Gherkin and the Eye that are purposefully included to indicate the contemporary city. 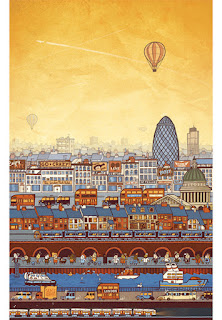 Top: U is for Underground @2009 Paul Thurlby
Above: ©Artist unknown, c.2009 via this tumblr
Both use the ensemble of St. Paul's
the Gherkin, and Natwest to represent London.

Compared to the much less frequent examples incorporating the Shard: 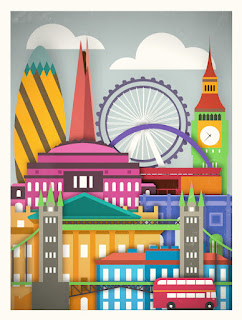 Above: The Londonist, a widely-read events blog, is one of the first and few to incorporate the Shard
into its logo, alongside Big Ben, the Eye, the Gherkin and St. Paul's dome.

The lack of acceptance of the Shard is especially remarkable in the year 2012, when London and the rest of Britain, were are told, will be renewed via the magic of the Olympics. The Shard already has an awkward relationship to this spectacle, in that it actually has nothing to do with the Olympics at all, but is being finished in the same year and that the Olympic games will occur in the same city. Last week's laser-show opening was a kickoff of the Olympics, just weeks away, but one that didn't make reference to the games at all. 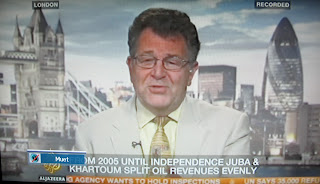 The Reporting from London, 2011.
Top: Al Jazeera shows the Gherkin and the Tower Bridge.
Above: SkyNews from the London Stock Exchange, showing St. Paul's,
Tower 42, the Gherkin, and the towers of Canary Wharf.

The games have ratcheted up the provision of graphic representations of the city, even among those media groups which do not have official Olympic broadcasting, such as CNN and the BBC, but also by NBC Universal: 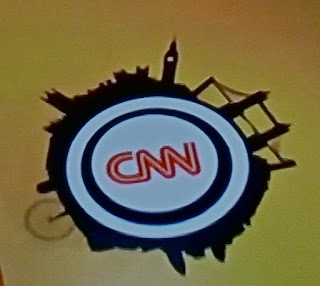 Above: CNNGo! celebrates London, 2012.The skyline is clearly made up of the London Eye,
Westminster Cathedral and Big Ben, and the Tower Bridge,
with the Gherkin and what may be the helmut-shaped city Hall on the underside.
Below: NBC's promotional trailer for the Summer Olympics.
The opening sequence shows Big Ben, the London Eye, Buckingham Palace and the Gherkin, but not the Shard.

All of these 2012-specific spots pay respects to the Gherkin and the Eye, along with the classic tourist landmarks such as Big Ben, Tower Bridge and St. Paul's, but none of them show the Shard, not even the BBC's non-Olympic Olympic extravaganza: "London Calling, The City of 2012" whose title animation shows One Canada Wharf and even the forever-loathed Centre Pointe, but does not include this year's debut tower: 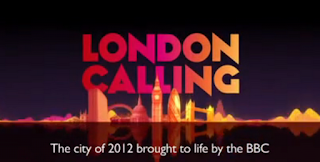 The uplifting television advert, with panoramas of the Thames and long shots of a dozen London landmarks, especially St. Paul's and the London eye, shows the Shard only for a split-second in the background of a night vista:

Surely the Shard will be more widely depicted over time, when its presence is more in harmony with the mood of its city. Its not like its going anywhere, and in the future its initial associations will wear away. But it is this lack of inclusion thus far, the lack of celebration around its arrival, reveals that it is so disdained as to make its artistic ambassadors act as if it wasn't there.

Big brash buildings often take time fit in, especially in older, historic cities which fret over threats to the appearance of its ancient cityscape. But the faint praise for Piano's feat is due to more than just an uneasy reaction to this enormous erection's sun- and landmark-view blocking height or mass. Skyscrapers are landmarks, and landmarks are symbols, which by definition stand for something, and the creator cannot always declare the definitions. For an architectural gesture that was always designed to be an icon, it is the very fact that it is a symbol, and what it is a symbol of, that has made the Shard so unwelcome.