The Most Architectural Country on CNN

Another post-Soviet, Eurasian state that has both built iconic architecture and made these landmarks the central focus of advertisements shown on CNN is the Republic of Georgia. There are several advertisements for the Republic of Georgia that have appeared on CNN over the last few years. Recent iterations (many viewable, but not embeddible from the Invest in Georgia website) such as the one titled Why Georgia is Different showcase the country's recently completed glass halls and gilded towers. Another, not posted to the site, shows one the country's 80 newly-constructed, glass-enclosed police stations, and underscores this architectural metaphor as part of the state's commitment to transparency and anti-corruption. 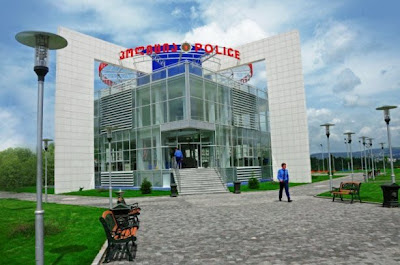 Georgia is fairly unique as a small, developing country without any particular resource boom that has undertaken a nationwide construction of new public facilities. While this might make the pages of the Financial Times, that the Republic's recent buildings feature the stylish attempts at avant-garde form-making from such celebrity firms as UNStudio and J. Meyer H. make this fertile eye-candy for the light-speed semi-pro architectural blogosphere, the universe of DesignBoom and its siblings. 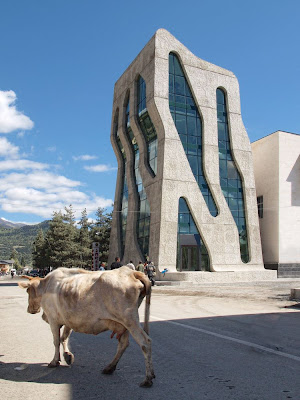 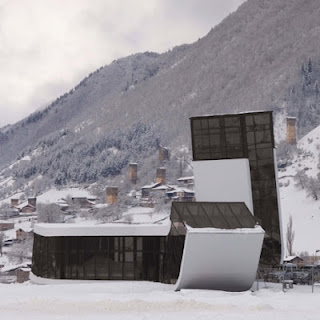 Terminal Building for the Airport at Mestia, Georgia.
Designed by Jurgen Meyer H. Via Dezeen, November 2011.


This has given the leading architecture blogs a little geographic variety in their usual line up: The Fox Is Black recently featured a rest stop along a Caucasian highway designed by J. Meyer H., and last November FastCo Design decided on titling a post: Georgia Builds the World's Wackiest Border Crossing (the childish title is actually better than the horrid copy of the rest of post), which featured another JMH design of what is certainly rather delightful for a border crossing, although it adheres to the cookie-cutter mold look that makes JMH's buildings more punny than clever. 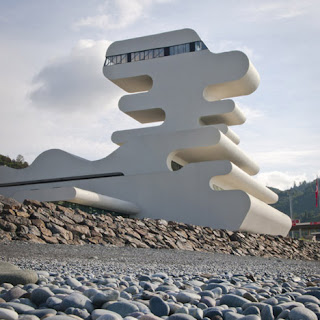 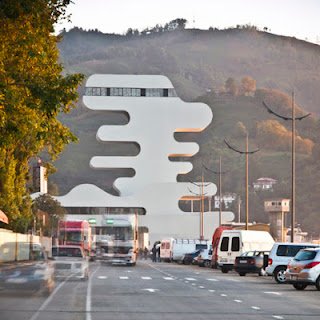 The 'Georgia' geographic tag on Dezeen in particular is an easy reference for Georgia's new landmarks. That Georgia's remote airfields have luscious terminal halls worthy of Wallpaper, thought up by some of Europe's most popular architectural talents, is remarkable by itself. Less celebrated is the Ministry of the Interior, situated outside of the capital on the way to the airport, with a half-hearted attempt at showmanship via its undulated glass, looking like a new-built office park anywhere, but proudly displaying its gesture of government openness and accessibility via its shiny exterior. 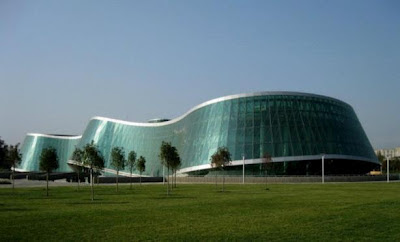 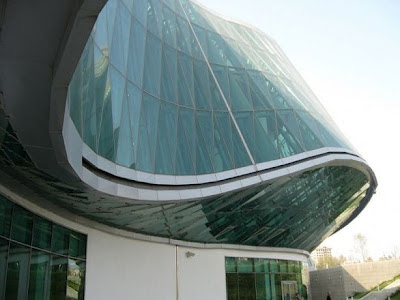 In a similar way to Azerbaijan and Kazakhstan, this whole effort, which must be expensive, comes across as a whole lot of marketing. Georgia is working hard to attract investment, with a website and a series of CNN commercials that seem designed solely to increase the country's standings in the World Bank's Doing Business Rankings, a phenomenon that has grown in the last five years to a bizarre fixation. Georgia isn't, ultimately, a wealthy country, and sits in a troubled region. This is before considering the fact that an autonomous region of the country declared its independence, with Russia's encouragement, and the country was invaded and humiliated by its giant former ruling power just as the first of these projects was commissioned. 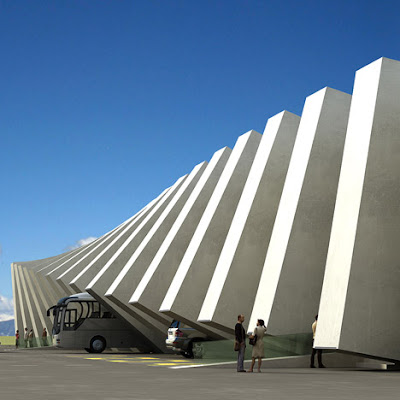 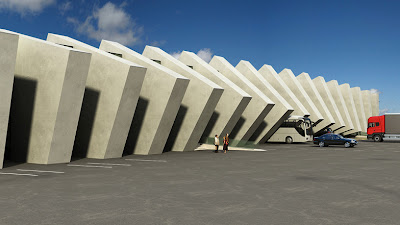 Renderings for the Border Checkpoint at Ninotsminda, Georgia via Dezeen, July 2012.


So, rather than giggle at why a border post is in the outline of a giant squiggle, one might start raising critical questions such as why Georgia needs such a monumental pile guarding the borders with Turkey at all, or whether its remote corners of the Caucaus need air terminals which look nicer than first class lounges at major hubs. Its unquestionable that Georgia's infrastructure budget might have been put to use elsewhere, perhaps more generally in providing services to its citizens. There has been some investigation into how one of these new architectural designs comes about and why realizing one will cost 66% more than the Ministry of Agriculture's entire budget.

Speculatively, it is easy to imagine that Georgia's leadership is focussed on investment-fuelled growth, and that blog-ready infrastructural projects might have a singular ability to brand Georgia as a progressive, cool country. But these undertakings are also surely profitable for national construction companies  and land developers. Exactly who in Georgia truly benefits from this is not obviously, and as the above-article makes clear, the answers are not forthcoming from the various government entities which have suddenly taken an interest in awarding jobs to hip architects from central Europe. Whether this is all the worthy endeavors of strengthening a young, weak, isolated state, or another iteration of cronyism is not currently clear, but what is lucid from Georgia's current architectural infatuations is that Georgia may not, in fact, be different and that it takes more than a curtain wall of glass to make democracy and development more transparent.
Posted by MM Jones at 3:51 PM