Which City In China: Gucci Store on MSNBC 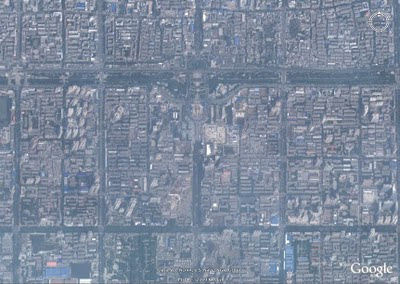 SOME CITY IN CHINA. 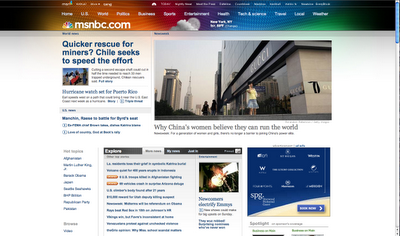 Yesterday's home page for MSNBC had a headline story about women in China. The accompanying leading photo was a fantastically deep shot of a young Chinese woman, talking on her cellphone outside of a glossy Gucci store in the early evening light, with a pair of uniquely-crowned skyscrapers in the background. It could be anywhere in the massive country, and number of scores of adolescent megacities. What city in China is this?

Its easy to start at Shanghai-- the depth and breadth of the fußgängerzone over the woman's shoulder suggests Nanjing Road. But I just couldn't find the two tell-tale skyscrapers, one looking a bit like a combo of the Hopewell Centre in Hong Kong and the Trianon Tower in Frankfurt, the other looking rather ordinary, but capped with an enormous radio tower like Avenida Paulista in Sao Paulo, Brazil.

Narrowing down the search by considering only Chinese cities with Gucci outlets is hardly helpful: there are nearly 30 in about 24 different mainland cities.

I lucked out on Flickr (and many thanks to Flickr user for the below image), eventually confirming that it was the ancient city of Xi'an, now the 19th largest city in China by population, larger than Chicago. 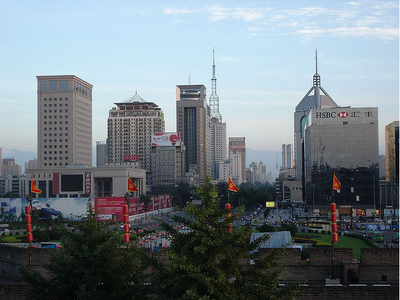 Its possible in Rheanna2's lovely image to see not only the two distinctive towers on the left, which now look much shorter and closer than the original image, and also the city's Gucci outlet is evident at right, and behind it, another squat tower looking something like Fifth Avenue Place in Pittsburgh. I find it remarkable that there are so many huge cities in China, and so many Gucci stores.