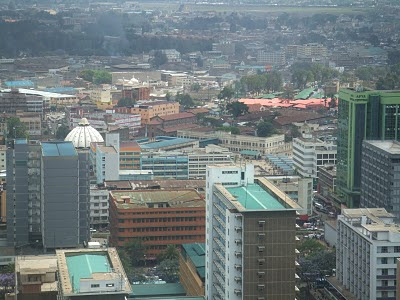 AFRICA AND ITS CITIES; LONDON.

I've been working away at this post on African Cities in my mind (mostly) and at my laptop (occasionally) for a while now. Partly, I have hesitated because it is such a ridiculously enormous topic to cover (although others try to do just that, see below), and also there has been such a stream of further print articles and design community commentary about the topic over the past month, that just left me increasingly overwhelmed. This arch of fresh media became a torrent as my twitter page revved up in tph (tweets-per-hour) as the UN General Assembly, with its ocean of words over the MDGs, occurred this week in New York, and twinned with the Clinton Global Initiative.

This all has followed on the closing of David Adjaye's "Urban Africa" exhibition at the Design Museum in London, which was on since March and is moving on to South Africa, Berlin and then Lisbon, and is a furtherance of a smaller sampling of his photos that he put up at Harvard GSD. Thank you to the excellent Africa Is A Country for the reminder.

I'll save space here and not regurgitate others' descriptions of the show's details, (also here), beyond to mention that Adjaye spent about ten years traveling to somewhere between 45-55 African cities (only national capitals, it seems), taking over 30,000-35,000 point-and-shoots of these cities, of which about 2,500 to 3,100 where tossed on the walls at Shad Thames.

To begin, two general comments I have:

(1) What an envious endeavor, to be able to have the means to visit every African capital city over ten years. Supercool. Hope to do it some decade very soon.

Others have commented on Adjaye's less-than-stellar technical and even artistic photography skills, which seems a shame, if only considering the carbon footprint involved. Would that someone with a better shutter-thumb had made the journey. Still others have pointed out that a more revealing stack of snaps can be had by spending some time at Flickr with some more talented and professional camerawork, or the forums Skyscraperpage and its rival, Skyscrapercity (whose African city forums are quite active, up to date, and exhaustive). These two are often mainly an agora for local building enthusiasts, and so often boasts better information than Adjaye could have hope to assemble as he zoomed around each city in a taxi for a few hours. Not to dump on him too much, but I was surprised at his curious pronouncations of the cities' names, and wondered if he had spent so little time in each place that he never got the words right. As someone with an architectural background, I was also haunted by his assertion that he didn't have time to sketch on his journey, so that his "camera was [his] sketchbook," he giggled. So much for the Grand Tour, in that case. 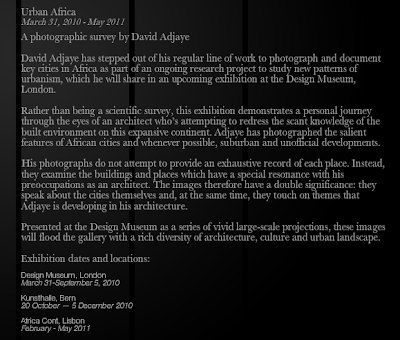 I still I am not clear if the possibility of a deeper analysis occurred to Adjaye, and its certainly not to say that the journeys weren't totally worthwhile, at least for him personally. But the whole undertaking seemed both to be too wide: Is Cairo really as unfamiliar a place, and as adequately captured in a handful of pictures, as Bissau and Nouakchott? Also, how curious his decision against adding to the architectural discourse on sub-Saharan Africa's foremost megacity, Lagos, because technically it is no longer the capital of Nigeria?

So if too wide, it was also, critically, too shallow, missing a lot of evident opportunities at furthering discussion of exactly what African cities are made up of, other than derivatives of non-African cities' elements.

The exhibit of the photos seemed to be remarkably devoid of even a cursory juxtaposition, other than a clumsy curatorial sorting. Organized around odd choices, cities are grouped by terrain type, (with "savanna" and "grassland" considered distinct, but the latter lumped in with "forest"). From the photos are grouped by prosaic building-use typology (public, private, etc).

The scale seemed suddently to be too narrow when shifting through a mountain of photos which a moment ago was supposed to be about cities. Why the leap to the level of individual building, when I thought we were looking at the whole place? Are we focusing on Architecture, or on Urbanism? What is the conclusion? Do banks in the Savanna all look the same?

What about buildings which once had one purpose and now are something else? What about structures that weren't built by construction companies, the teeming districts of informal structures with multiple uses? Aren't these where most African city-dwellers reside?

I guess it just wasn't that type of thing. It was for looking at a pic and saying, so that is what a ministry in Kigali looks like, and so on.

Nonetheless, Adjaye has a certain point, that African cities are less familiar and recognizable among the types of people who go to the Design Museum than cities on other continents that they might also have never visited. Africa has some huge cities, which, despite having half a century as independent, national capitals, could use some publicity, and furthermore, some integration into the global conversation of cities as destinations for visitors.

These cities have plenty of slums, but they also have stocks of 20th-century buildings, designed and erected by architects, many of them from Europe and the United States.

Is it at all a stretch to conjecture that the lack of iconic recent buildings and iconic architects has contributed to African Architecture being overlooked? In which case, Adjaye would be the crown prince ready to ascend to a new throne, as the most prominent architect of African parentage, and the only individual to come from Africa to reach the starchitect heights of the contemporary global scene.

However, he hasn't done much work on the continent, instead building in Denver and celebrity homes in London, among other locations. Adjaye's previous exhibition in London featured drawings, photos and models of his work alongside the odd African artifact, which struck me as kind of daft, and really the same kind of hollow, thoughtless gesture that haunts the Design Museum show. He has just started to work in Africa, whereas other African architects who had successful academic careers and professional practices elsewhere, like Joe Osae-Addo and Francis Kere, have already built in their respective home country. Theirs are admirable designs which push the integration of global contemporary architecture and African built identity forward. Among Starchitect celebrities, Even Foster has a project in Sierra Leone already.

Adjaye seems somehow disengaged from his home continent, and the glossy exhibition, with its glossed-over disposition, only reinforces this notion that he is as unfamiliar with the subject as any of his peers. I see a parallel between Adjaye's by-passing of his homeland on the road to superstardom, and Zaha's late, first commission in her ancestral home, Iraq. But I'll not explore this tangent; the topic at hand is enormous enough.

"Africa" and "Architecture" are huge subject areas in and of themselves, but "African Architecture" is an under-developed area of enquiry and publication. This is changing, not least because Africa is urbanizing at an incredible pace, at the same time that its economies are among the most rapidly expanding in the world. The two phenomena cycle on one another, and the growth of Africa's cities and its economies are starting to be linked by observers, both in the media, in the development-aid complex, and in the architecture and design community, (especially the socially-responsible end). African cities are being introduced to the outside world, and the global architecture profession is increasing its activity in Africa for the first time since the immediate post-colonial period.

The Economist recently featured a piece of Addis Ababa, specifically discussing its growth and architecture. The article itself, as well as the discussion in the comments, covers the topic pretty well, including the presence of "Architecture" in Africa's boom towns, Aside from the technical HVAC and seismic discussions, the debate is pretty insightful on how Ethiopians view what is happening to their blooming new flower, with its lack of democratic input into the city's growth, and the cronyism and corruption through which most building is conducted.

Of course, more traditional city planning has taken place, and continues. A curious proposal for the emerging South Sudan, led to derision. Perhaps its childish, cartoon gimmick of the plan fed the notion among foreign readers that Africa is a place devoid of more serious architectural and planning decision-making. Perhaps this notion even points to a valuable truth.

But such one-liners ignore some very ambitious developments in these fast-growing urban economies. For instance, the Governor of Lagos has gained attention for his grand plans for his city-state. This is probably the largest urban transformation in the works south of the Sahara. 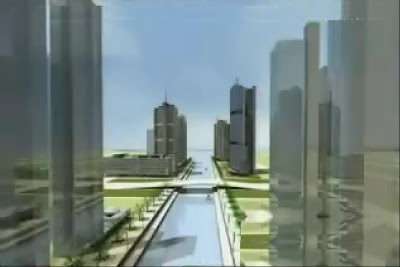 Other reporting is less focused on new development, but on the experience of the place. There are some rewarding finds here. Maputo was recently the subject of a compact little videopodcast at Monocle, which is actually not their first short film on an African place. Put alongside videos of the Venice Biennale, and the Geneva Watch Fair, this is a meaningful symbol that African cities are serious subjects for travelogue and enquiry. This follows a beautiful bouquet of prose authored by David Smith for the Guardian at the beginning of the summer, a melancholic essay bursting the unique atmosphere of a crumbling, post-colonial, pre-boom African city.

I'd like to conjecture that the readership of all these publications are on the cusp of a new phenomenon, of African cities as places of business and growth rather than poverty and ruin; the African City as subject as well as dateline.

Mogadishu has all too often been both subject and dateline, a classic example of poverty and ruin. It embodies all that is hellish about Africa, from the perspective of a news audience. The Somali city (dare call it a "capital"? The limits of central government control are measured in blocks...) was the one city that Adjaye didn't visit, because he didn't want to photograph the ruins and there was no civil society, or something like that (its understandable that the place isn't the easiest to get to.) I find the comment fascinating because of course the citizens of Mogadishu live in those ruins, but the exclusion seems another example of the pre-determined definitions in Adjaye's mind.

Luckily, someone else tread where Adjaye did not. For a brief period on Thursday afternoon, the headline image on the homepage screen at Msnbc.com, was this awesome photo taken by Feisal Omar for Reuters. 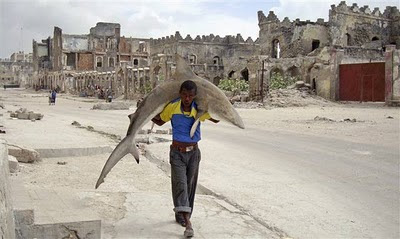 I think the presence of the shark is really what does it for most viewers, but I have to say that I was equally stunned by the ruins in the background. There is a devastated quality of the crumbled shells of the structures which somehow contrasts with the relatively well-maintained right of way of the street that reminds me of pictures and film I have seen of Europe at the end of World War Two. The buildings are dead, but the city is alive.

To me, this photograph says much more about the African City, and the reality of its inhabitants, than several hundred of David Adjaye's travelogue snaps.