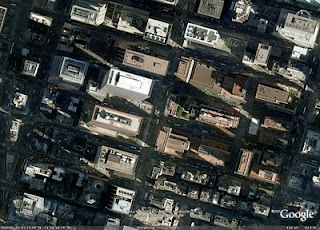 One of the many ways this new age is evinced is the existence of American Greed, a show produced by CNBC. I am a little late coming to this delightful and informative series, having just recently returned to the United States and the incredible, non-stop deluge of television. We still watch television like no other people on earth.

So the former head cheerleader for and mouthpiece of Wall Street is now doing hard-hitting expose journalism, all encapsulated in neat, easy-to-consume segments available on Hulu.

To set the tone, to prepare the audience, to signal the horror of American Greed, the graphics folks at CNBC chose carefully for their background imagery. What embodies the cold, ruthless menace of Conspiracy Capitalism? Office Buildings, several of them, together. Repetitive, bland, faceless, cold.

While I have no contact with the graphic designer that made the title piece for the show, the choice is not a random one. 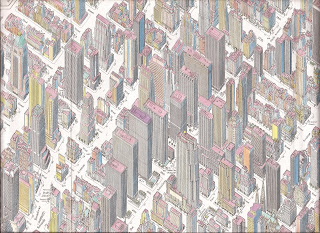 Along Sixth Avenue, the Avenue of the Americas, opposite Rockefeller Plaza, stand what is popularly and academically known as the XYZ Buildings.

The name's origins are a bit disputed; they may have even been called so originally by their creator, but either way, they very nicely encapsulates how bland and anonymous these buildings are, an extreme of corporate American architecture. It also helps that the first tower was originally the Exxon Building, which not only has lots of XXs in it, but is also generally regarding as one of the most menacing, and EVIL conglomerates of all time, the one of oil spills and trust-busting. The other two were originally the McGraw-Hill and the Celanese Buildings. 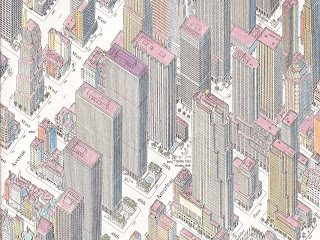 The short article in the book Manhattan Skyscrapers, by Eric Peter Nash and Norman McGrath, is lovely, and worth reading entirely, but I won't reprint it here, except on a few points:

Even [the architect] Wallace Harrison's biographer…calls them "monotonous," "tedious," "overbearing," and "arid" all in one paragraph. The buildings are most criticized for their prosaic presentation of the tall office building as shoe boxes of commercial space…

The very anonymity of the XYZ buildings works to their advantage in forming a kind of abstract, gridded background that thrusts the avenue intuit he foreground. These are surely the most reticent towers ever built…from certain angels up and down the avenue, the towers seem to disappear entirely, freeing up the sky around them…

The XYZ plan is the closest approximation of what Le Corbusier's proposed City of Towers would look like in the context of Manhattan, or what a city might be like if it were all designed by one person…

The XYZ Buildings fail in the foreground because of their lack of style, but are overlooked as among the city's best background buildings. 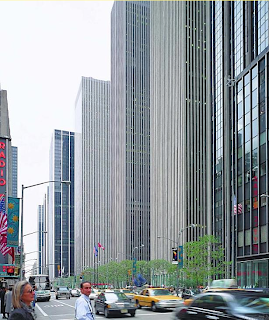 Perhaps as the ultimate metaphor for architectural nefariousness, the XYZ Buildings also appear as the symbol of radical Manhattanism on the cover of Rem Koolhaas's seminal Delirious New York. 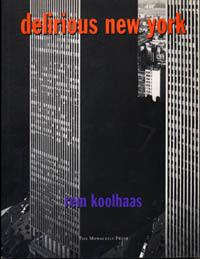 And so this triptych is a great symbol of faceless, corrupted corporations invading our lives, taking over our country, ruining our society through their GREED! It also doesn't hurt that NBC's competitor, News Corp's Fox News, has its studios in the base of one of the buildings. (or, what does that say about Fox News?!) 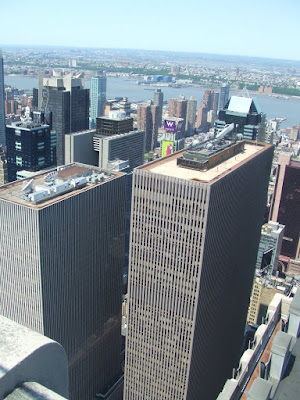 From Top of the Rock ©2007 Bauzeitgeist

So, pure hideousness, then. What of this somewhat gorgeous photo, taken by Ofer Wolberger, via This Isn't Happiness, which captioned the photo simply, "Gotham." Which further suggests that the XYZ is the most generic stand-in for not just New York, but for anonymous urbanism. 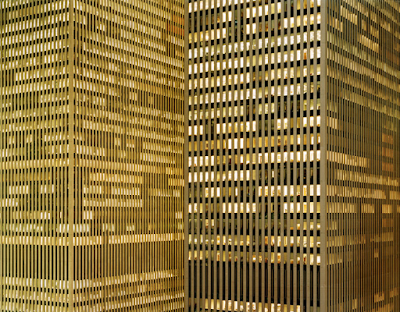 ©Ofer Wolberger
Posted by MM Jones at 9:09 AM