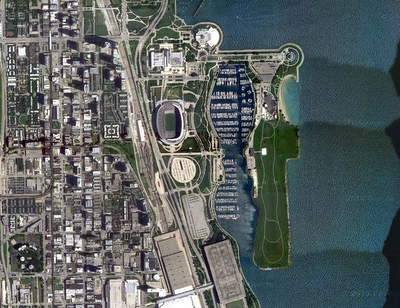 Its great that people are taking the occasion of today's date to celebrate the seminal Powers of Ten film, that simple masterpiece by Charles and Ray Eames, even if its not so much an anniversary of its filming in 1968 as a coincidence of numbers. People of all ages could use as much scientific education as possible.

The day is being celebrated with events and screenings from Brazil to Colorado to Germany, but, somewhat strangely, there's been no announcement of any commemoration at the location of the film itself. The film is very specific to its place-- its tempting to call it a precursor to Google Earth, but its basically a paced zoom from universe to city to subatomic, emphasizing scale, not aerial photography. The location is a spot on Soldier Field in downtown Chicago.

A few years ago, while living in Chicago, I made a visit to this spot, which so many millions of students have come to know in classrooms. For a design project, I proposed a commemoration, a one-meter-square video screen, embedded in the ground, and showing the film continuously. The project boards are all in storage at the moment, but I do have some photos of the site that I took at the time. 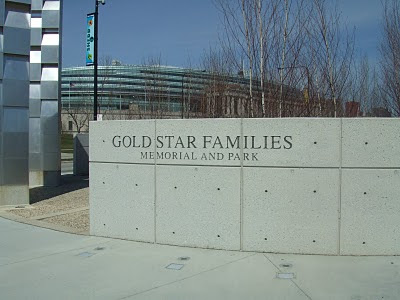 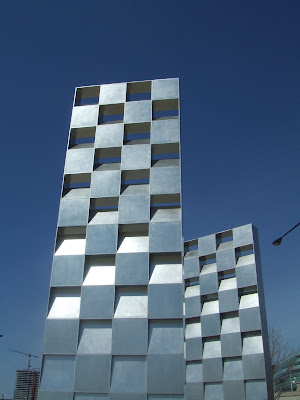 Peripherally, the area has changed significantly since 1968, in that Soldier Field stadium has been reworked, and the adjacent peninsula is no longer Miegs Field Airport. The site of the film is still a greenspace, but is now a park dedicated to police veterans, called Gold Star Memorial Park. This purposing has resulted in a number of sidewalks and other concrete structures, as well as some shiny metal tower sculptures. 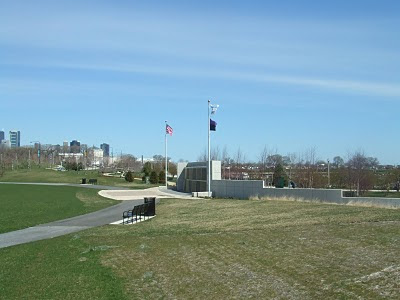 Its tempting to wonder if the Gold Star organization and its patrons are aware of the Eames film. I am not sure if the families of those for whom the area is dedicated would be open to an homage to the place's role in design education history. For now, there's no formal marker of this famous square meter--although I came across a recounting of the filming which revealed that the picnic was staged near the Eames home in California. Here is the exact spot where the man had his somnolent summer picnic, 44-years ago: 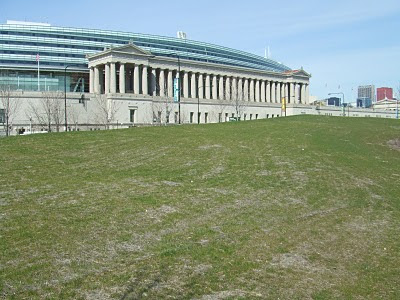