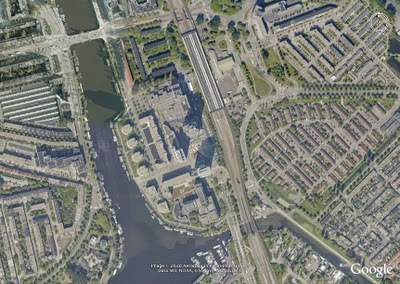 This is a story about a building, and its name, and how they are connected. Its also a story about thinking about a question, and its answers, for some time before immediately seeking or discovering the history, evidence or reasons, and how history changes truths. In addition to my observations and photographs, this entry is interspersed with quotes from two volumes: Amsterdam's High Rise, edited by Maarten Kloos and published by ARCAM, and Amsterdam: A Brief Life of the City, by Geert Mak.

I had an incredible few months in Amsterdam this year, and I'm in the process of readjusting to life State-side. Getting used to being in a car every day, for instance. From late May til early September, I did lots of train and bike riding, even a handful of evening canal-boat trips.

Its no news that the Netherlands are full of great buildings, the centuries-old canal houses and some of the most incredible contemporary architecture in the world. It also, like all things Dutch, has its fair share of weird, from the intentionally-far out to the unintentionally curious and out of place. This includes some unexpected examples of American-style corporate post-modernism skyscrapers, which seem somehow the least Dutch form of building. 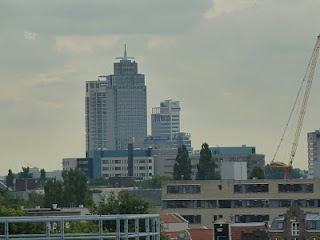 Like most European cities, historic Central Amsterdam is surrounded by successive rings of more recent development. The outer edges, particularly to the south and southwest, are now small thickets of skyscrapers, much like La Défense in Paris and Canary Wharf in London. 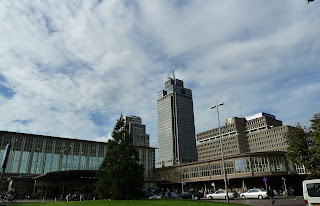 The southwestern area, around Amstel Station, historically caleld the Weesperzijde and often referred to as the Omval, where the Amstel river bends before entering the older city, is in particular quite a lot like the Isle of Dogs, with its bland corporate headquarters, bleak plazas (although, in this case the Amstelplein is more diminutive, as everything in the Netherlands always seems to be), nearby rail station, and adjacent waterways. 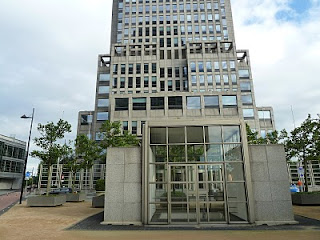 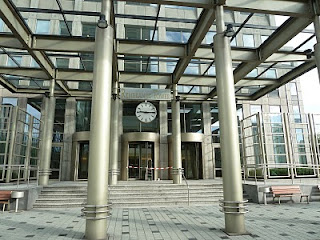 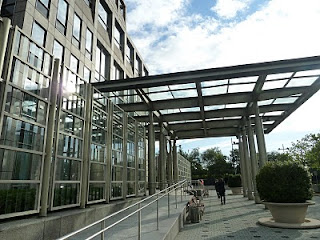 Having emerged at roughly the same era, the two Eurocorporate clusters are remarkably similar in appearance, atmosphere, function, and even relation to the wider city. 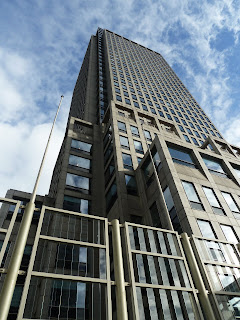 The area is easy identified by three tall skyscrapers, which are the tallest in the city. 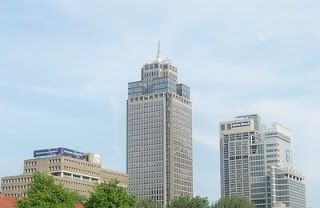 The very tallest of these is a grey, neo-American art deco pomo office block. It is named for artist Rembrandt van Rijn, as if the tower is an advertisement for the whole country, a commercial beacon. The Rembrandtor. 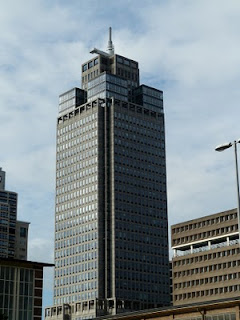 At 135m and 35 stories, it is the tallest building in Amsterdam. It consists of a steel skeleton around a concrete core and narrows toward the top. At the base, the tower has a surface area of 48 x 48 m, and at the level of the upper floors this is 22 x 22m. The core, which also tapers toward the top, contains lifts and service space. The building houses 30,000 m2 of office space, a restaurant, and a business-support centre, as well as an underground car-park for 240 vehicles. The façade is executed in a crystal-white, fire natural stone, with glass sections at the corners. --Amsterdam's High-Rise, The Hesistant High-Rise, p92. Maarten Kloos, ed. ©1995 ARCAM Pocket 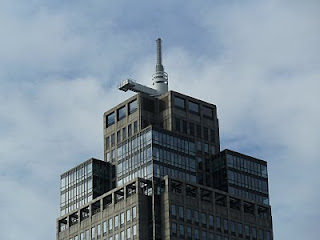 Not surprisingly for a tall tower in a low, flat city, isolated away from the built-up areas, Rembrandtor is visible from many different parts of the city, as if a panopticon that followed me around on my bike rides and tram trips. 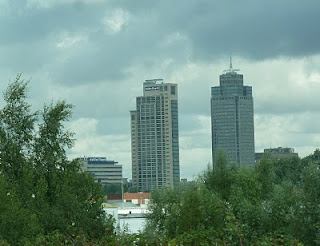 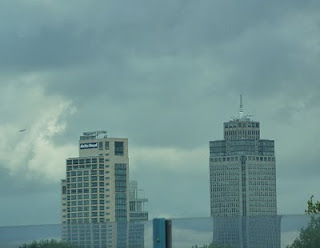 [As written by]…Dutch Architectural critic Max van Roy on 27 February 1995: "Rembrandt Tower appears on Amsterdam's horizon as a deus ex machine. Better: it appears on all its horizons, because it can be seen even from the most unexpected angles.--Ibid., p.93 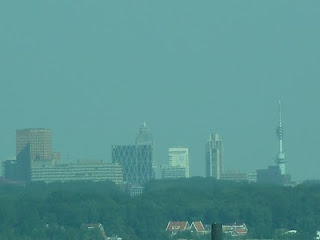 I ended up photographing it a lot as can be seen: on the street, from other vantage points in the center city, even from the car or train when going out of town for the weekend. As it is located at the edge of the city where the main rail and road lines enter, its possible to see the tower clearly from nearly 20km away, near the town of Breukelen (it also helps that Holland is so absolutely flat). 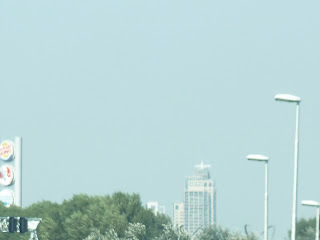 Rembrandt Tower stands prominently…and is majestically present, since it can be seen both along important sight lines over the canals and the Amstel and from the countryside surrounding Amsterdam. --Ibid. 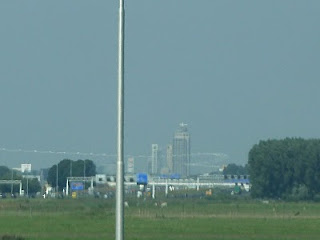 I kept asking myself a totally rhetorical and sort of odd question: What might Rembrandt himself thought of Rembrandtor?

Rembrandt is more than 300 years dead, his remains somewhere beneath the Westerkerk, that other Amsterdam skyscraper. A real answer is completely impossible to have, and I didn't even know why I was asking it, other than to confront the curious and unfortunate way in which I assumed the man's name had been so boldly co-opted for what I supposed to be corporate developer marketing. I didn't exactly research the question on my own, but the thought kept entering my mind, as when I visited Leiden one Sunday and learned that Rembrandt owned property near his birthplace, or read that of his reputation in the Amsterdam society of his time. 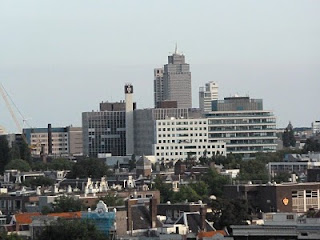 [His patron the burgomaster] even tried, without success, to integrate Rembrandt in Amsterdam society. Geert Mak, Amsterdam: A Brief Life of the City, p.128 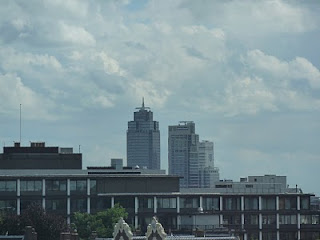 The first problem was Rembrandt's character. He was, to put it mildly, not especially polite. The few anecdotes about him that have come down to us also illustrate his greed…Stories also relate his bad humor, his moodiness, his coarseness and his falseness. --Ibid., p.128 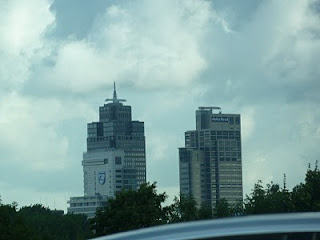 ©all images (except top) 2010 Bauzeitgeist

Rembrandt also lacked a solid political base in the city. The Amsterdam sociopolitical system was founded on patronage and protection, with the result that the status of a painter depended only in part on the quality of his work. Far more important was the question of which circles patronized him, something akin to the importance which museum and art critics place upon the "value" of a piece of art today. In this Rembrandt did not exactly prove himself adept. --Ibid., p. 129

Having left Holland, and without my daily encounters with the strange figure on the horizon, I mostly forgot about it. But then, last Tuesday, as I was readjusting to life in Boston, I noticed that the world's pre-eminent Rembrandt scholar, Ernst van der Wetering, would be lecturing at the Peabody Essex Museum in Salem.

I attended the event. I cornered the fellow afterwards and, served up in some rambling prelude, blurted out my question: what would Rembrandt have made of Rembrandtor. For someone who had just filled a room with wisdom of Rembrandt's mastery of light, he was very receptive to such an oddball interrogation, and was quite helpful to inform me of the existence of a 1640 landscape drawing by Rembrandt, who enjoyed sojourning in the very Weespersizjde where his name-sake tower now stands. It wasn't only a shallow, easy name. Speaking to Rembrandt's personality, and referencing Rembrandt's troubled, indebted, scandalized demise, ending with his anonymous burial in a pauper's grave, van der Wetering asserted that Rembrandt would have reveled in the appellation with the pride and hubris of the ultimate revenge, so much better known to history than any of the city's burgomasters and merchants, that the dull, post-modern, neo-Art Deco edifice which blocks the views he once sketched, stand as his monument over a city that had once shamed and forgotten him.
Posted by MM Jones at 7:55 PM