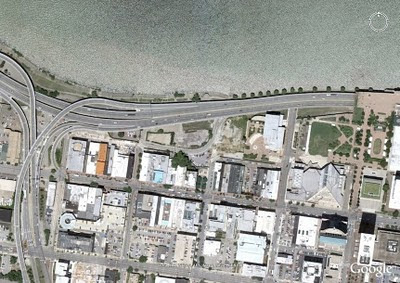 LOUISVILLE.
I was excited to receive a link to a press release via Twitter from REX, the firm headed by Joshua Prince-Ramus. It is quite a surprise in this Era of the Cancelled Project to hear that there is still commitment (and money) behind this thrilling, transformative project, even if it is only to be made possible by federal cash--maybe it is emblematic of our times after all. 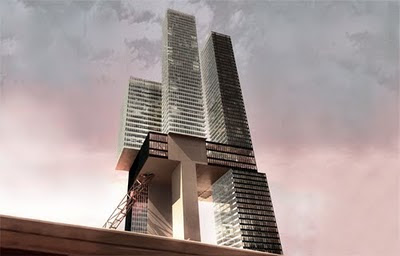 ©REX-NY. Image Courtesy REX
I have extensive family roots in Louisville, so in championing this project was in a way rooting for the home team. I was last visiting relatives in Louisville in May, and as I almost always do I visited West Main Street, and had come across not only the completely dead construction site for the Museum Plaza itself, but also the sorrowful site of the project's promotional office, still wrapped in Museum Plaza's hip branding, but locked shut with the lights out: 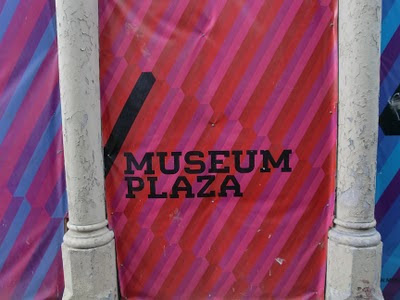 ©2010 Bauzeitgeist
A few years ago, when Museum Plaza was first announced, I walked past its showroom, and thought it was so quintessentially cool and fitting of an OMA tribe member to convert an historic storefront to promote the project, complete with inviting street sign: 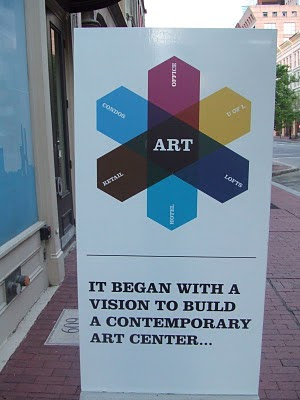 ©2007 Bauzeitgeist
Hope it gets reopened soon and that it and the site is buzzing with activity. Somehow its comforting to see an ex-industrial Midwestern river port getting some of the world's most cutting-edge new architecture and property developments rather than the daily stream of renderings for Ajman, Wuhan, Dhahran and Gurgoan. With all the new-money emerging markets charging ahead (which incidentally, Louisville companies like YUM! Brands and UPS stand to benefit from) and stories of America on the wane, its nice to have a story about a old-money industrial-wealth family heiress building a monumental edifice in the downtown of a middle-American city.
Best of luck to REX and the project's backers for the challenges that lie ahead. And for those of you not excited about the project, there's nothing better than a bit of OMA-style music-video promotion:
Posted by MM Jones at 3:22 PM