UPS's recent television advertising campaign, with its cheerful jingle, a re-make of "That's Amore", replaces Love with Logistics. Its hard to think of the neo-liberial, business-to-business concern of moving goods around the globe being broadcast to a common audience even a decade ago in such a cheery fashion:


For the appeal of the airplanes soaring, conveyor belts rushing, an endless distribution shed, and toy-like vehicle navigating the canalside paths of Venice, all to an upbeat singalong, its nearly delightful, despite the jingle's offensively absurd claim that whisking freight from Venice to New York to Shanghai could account for "carbon footprint reduced," or the more than slightly discomforting line, "there'll be cheers on Wall Street" at :33. How very of-our-times it all is. 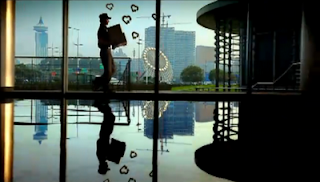 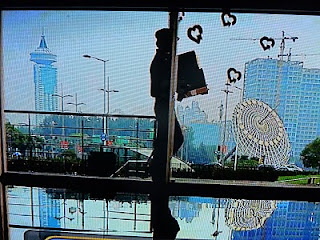 A visual moment just before this casually New Economy line, at about :32, was curious, in that its location, a city, was much less familiar than the towers of Lower Manhattan (with Gehry's new condo tower at :44), or the gliding gondolas of Venice. Here a deliveryman walks through a massive glazed and marbled corridor on his way to a delivery, with two distinct structures in the immediate background, a circular, metallic sculpture and a skyscraper, capped with a wonderfully Jetsonian crown: 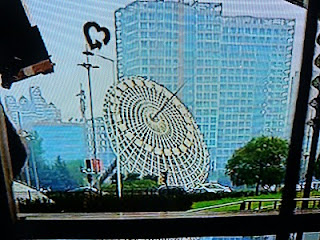 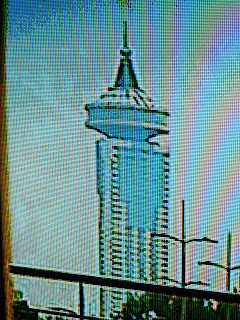 It happens that these two structural forms are in Shanghai, on either side of the River from one another. The flying-saucer-headed tower is, as might be anticipated, is a four-star hotel, specifically the Radisson Shanghai New World, which has a delightful revolving restaurant at its summit called Epicure 45, which "provides a revolving two-hour journey." 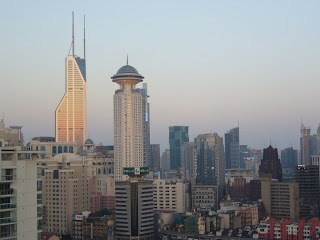 The sculpture, meanwhile, is a massive sundail, near the Science & Technology Museum on the Pudong side of the river: 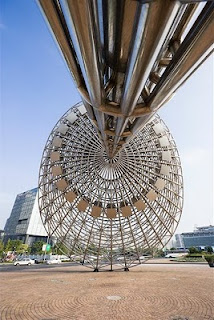 In the UPS commercial these landmarks are included alongside more recognizable cityscapes, the Empire State Building, Big Ben, the London Eye, the crumbling palazzo. The Huangpu Bridge is perhaps more recognizable than the Radisson, but neither is nearly as recognizable as these western landmarks, at the moment. However, just as China is included in the ad as an important part of world trade & commerce, these fanciful but prosaic forms are taking their place among the skylines and landmarks that stand in for their cities, and we are expected to recognize them. 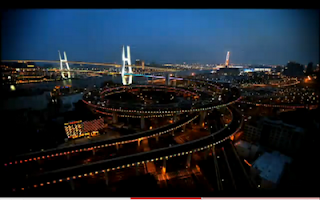