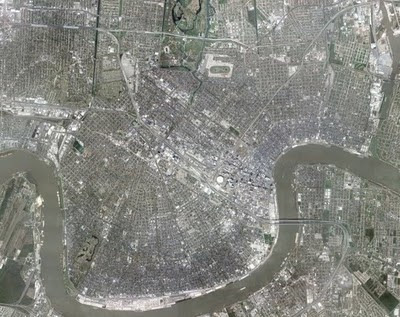 NEW ORLEANS.
This compares two recent projects for imagining a different New Orleans, neither of them the usual sort, that is, with an architect or developer making a serious proposals for real projects.
The first, the grandly-named and stylized Hypothetical Development Organization, promoted on the site-of-the-moment, Kickstarter, is perhaps the more curious of the two, in that there isn't much to it, once the all the instilled complexity is pushed aside.

I think this video reveals quite a bit about the project's philosophy that is surprisingly simplistic. Who owns these buildings that have been selected? Are there any plans to develop them? Generally, was any research into the actual conducted? Were the real places, in desperate need of actual improvement, engaged?
How about that Facebookesque Museum Of The Self, with blue mirrors? Isn't the brick building as it stands a thousand times more attractive and less gaudy? Not that it matters: while the building may not remain as it is, the Museum Of The Self will never exist, other than on a small sign on the building.
And what about those other signs on other buildings that the video clip derisively dismisses...Trump New Orleans among them. Don't these proposals have a potentially much more important impact on the city?
The whole exercise comes off as about as engaging as taking bong hits and playing SimCity or Second Life.
The second project, Candy Chang's I Wish This Was, is much more modest in execution but also somehow therefore more commensurate with its pragmatic possibility, more along the lines of street-tagging but also with a distinctly honest attempt at civic rallying. In its crowd-sourcing open participation, it suggests a greater potential for future action than the HDO. 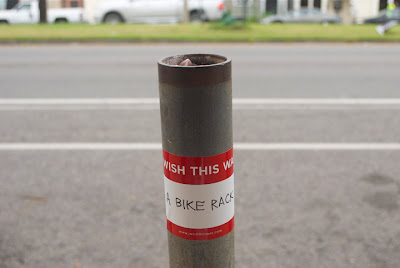 © Candy Chang I Wish This Was
Perhaps a public servant, entrepreneur, or developer will be on the receiving end of these small messages, and be able take on the suggestions, some big, some ironic, but many of them possible. Overall, it seems like a more interactive conversation, in which taggers influence each other as much as anyone else in the community. This could just as easily be expanded to to Detroit or Youngstown, or for that matter would be equally useful in Boston or New York. Flickr pool here. 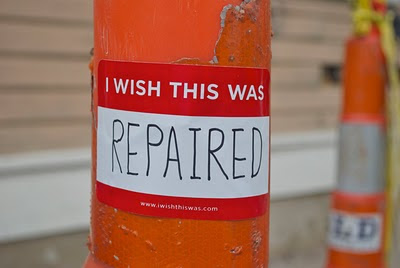