Requiem for The Spire 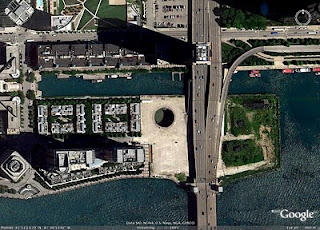 As reported in this story via Media Bistro's Unbiege, the Chicago Spire is officially, actually, really, dead. Also, not going to happen. Ever, as some say. Literally. Its a sad moment in Chicago's, and the country's, celebrated history of boldly erecting the world's tallest buildings (at least in our own cities. The Burj Khalifa is undeniably a Chicago building, albeit on the other side of the globe, but more on the similarities to Dubai a bit further on).

The Spire was only the latest and farthest along in a lineage of supertalls which were supposed to surpass the Sears Tower as the city's and the world's tallest buildings since the Sears went up nearly thirty years ago. Really, the Spire is at least the 7th supertall building proposed since 1980 for Chicago that was unrealized. 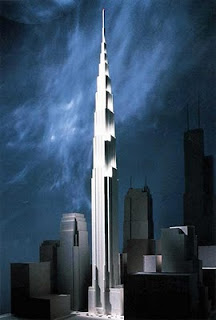 By the way, yes, I know that Chicago's tallest building has a new name, and a sarcastic pat on the back to the first Wikipedian who rushed to rename the Sears Tower entry. It is dumb and hubristic to rename such an icon and I am personally ignoring this new appellation, as I would if an investor bought the Wrigley Building, the Chrysler Building, the John Hancock, or the Empire State Building and tried to rename those.

Come to think on it, maybe the renaming of the Sears is another telling sign in the city hurtling away from the Era of Big, that proud era when it boasted the world's largest building, tallest building, busiest airport, biggest commodities exchange, etc. None of which is true anymore, and many of these titles have been transferred to Asia. Chicago was fading.

But then there was to be a renaissance. The Chicago Boards were on the cutting edge of technology, merging and creating a Credit Default Swap Clearinghouse-- how brilliant and bold and modern! O'Hare was so busy they had to restrict flight movements, that's the only reason why it wasn't still the world's busiest. And people were moving downtown. And not just into boring glass-and-concrete high-rises, although there were dozens of those. For Chicago, there was to be something bigger and bolder. How about taking the world's tallest title back? 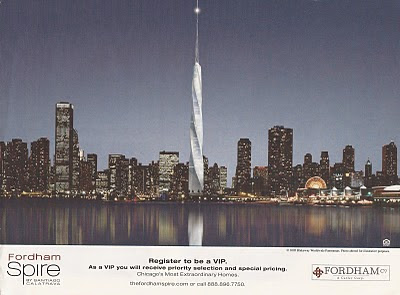 An early Spire advert, when backed by Fordham. c.2006

There was an enormous sense of anticipation and excitement around the Spire when it was announced and marketed. During this time, I happened to be living in Streeterville, the River- and Lakeside neighborhood where the Spire was to rise. Out of my window every day I could see empty blue sky where soon thousands of feet of building would stand. 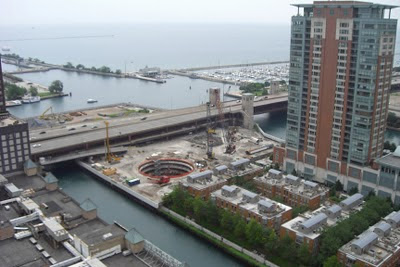 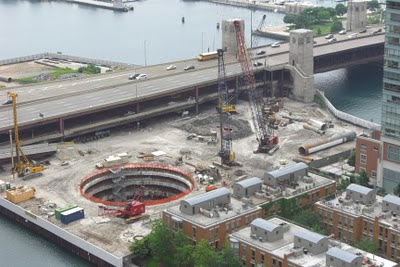 View of the Spire site when active taken from a McClurg Ct. apartment ©2008 Bauzeitgeist.

The entire United States, and really the entire globe, was experiencing the headiness of real-estate rush during these years, from cottages in County Cork to Cape Cods in California. But the Spire was part of that particularly glossy, urban and urbane ultra-luxury residential property dream that arced across the globe from the Gulf to the West End, in the previously 9-to5 only major American downtowns and in the boom cities of Asia. This became even more so when Calatrava's design, his vision, became the selling mythology of the project, with media adverts in European and American magazines. 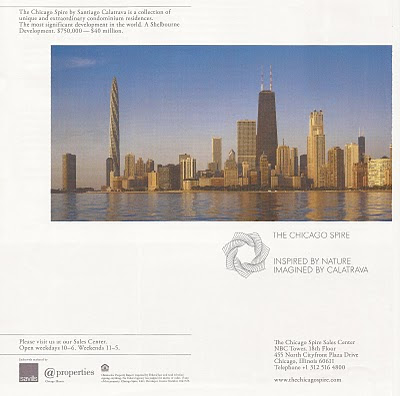 Heavy on the Calatrava, from the Financial Times, c.2008

Around the Spire site itself, the few blocks of southern Streeterville between the Northwestern Hospital and the Chicago River was from 2006 until 2009 nearly something like a mini-Dubai: There was so much active construction, with cranes spinning over the streets, day-by-day, floor-by-floor blotting out the blue of the sky and the green of the lake. 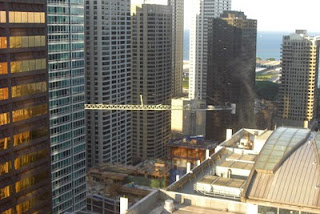 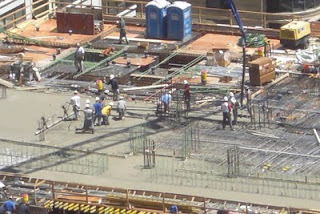 The Streeter, eventually blotting out part of the view of the lake.
©2008 Bauzeitgeist 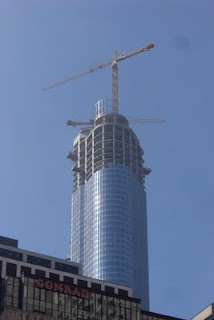 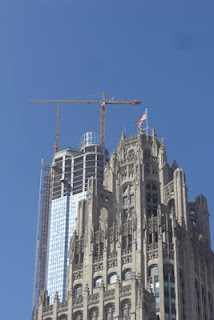 The Trump Chicago, now Chicago's 2nd tallest,
and the highest built since the 1970s.
©2008 Bauzeitgeist

But there was the more cerebral or perhaps emotional the fever of the future, with every block a proposed site or a makeshift condo-sales office. Journalists referred to landmarks that had yet to move off the drawings; neighbors gave street directions mentioning places that were still just piles of earth. No matter, it was coming, and endless procession of Newness coming online next year and for years after that. Were you going? Where are you buying? WHO ware you living? Helmut Jahn, how very sleek. Trump, well that will be nice, I'm sure. Calatrava, oh, dead cool. 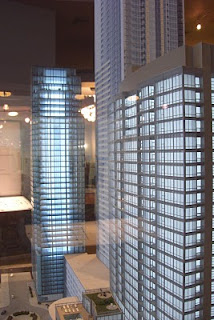 The model in the sales office of a development on Illinois.
The only tower to be built was the one I lived in.
©2008 Bauzeitgeist

There was ample information not just in the skyscraper-geek corners of the web but in the mainstream Chicago Press, of how the neighborhood would be an increasingly thick forest of Skyscrapers between the present and 2015, including the not-short Waldorf-Astoria just a few blocks east of the Spire: 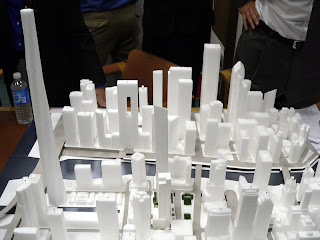 Image courtesy of Dantheman. Spire at left, Waldorf at center. 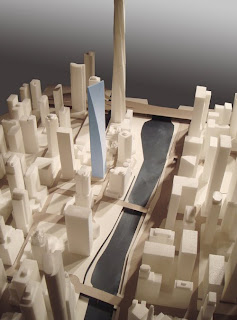 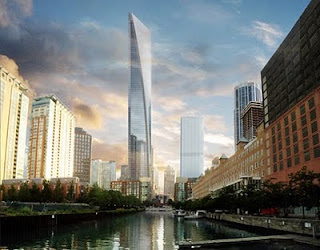 Showing The 1,215ft. Waldorf from the boat basin, looking west.

But then it was all over. It was nothing. The sales offices closed, the vacant lots were cleared of equipment. It was quiet. There was just the ground, the lake, and the sky.

Some skyscrapers just stopped. Go back to the online forums, or read the business pages to learn of formal cancellations (or enjoy the schadenfreude of lawsuits).

The Spire site has since remained dormant for several years, and is nothing but a big hole. It was difficult to find out what was going on, despite a fun publicity-stunt fill-the-hole competition.

Chicago is now weighed down by a multi-year overcapacity of space for sale, and it will be a long time before a serious proposal for a new tall building is put out, and probably quite a while longer before such a tower begins to fill the city's skies. Yet Chicago, like an older, American Dubai, remains that a place of possibility, and of speculation, despite all its unrealized dreams.
Posted by MM Jones at 3:35 PM