The Business in Bahrain 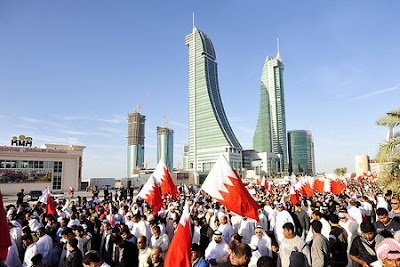 My tweet above from February 18th might have only been a pithy, hyperbolic aphorism, but as the protests continue in the Gulf, I wanted to explore this thought a bit further.

The historic uprisings that have roared across the North Africa and the Middle East reached tiny, affluent Bahrain about a month ago. There, the protests bravely continue, with increasingly disturbing reporting in recent days describing an increasingly violent, militarized and sectarian confrontation.

From when the crowds first gathered in the streets of Manama in mid-February, the particular nature of Bahrain's ultramodern built environment gave the events there a different character from the previous events in Tunisia and Egypt or the simultaneous street marches in Yemen, Jordan and elsewhere; quite apart from what is now civil war in Libya.

Cairo, Africa's and the Arab world's largest city, is enormous; densely built-up and developed. Its dusty-brown concrete jungle was constantly on display, live from Tahrir Square; and a significant chapter in the Egyptian revolution involved a night-time urban battle, simulcast live on international satellite news, showing protesters and their foes squaring off among the overpasses and on-ramps that twist across the Tahrir Square area, passing enormous international hotels like the Hilton and Four Seasons as they link to the bridges over the Nile. 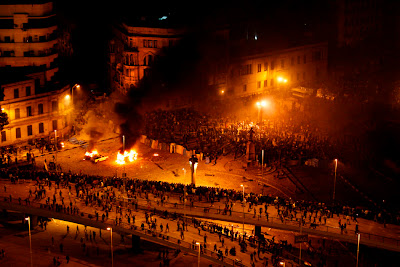 However, Cairo, famously dilapidated, a faded Paris of the East, is a layered mix of centuries-old warrens of side-streets, long, wide boulevards, and public plazas (for a more detailed essay on how Cairo's plan facilitated the uprising, I recommend this great essay and the super-excellent blog Mammoth also has a spatial essay on the Tahrir Square revolution). 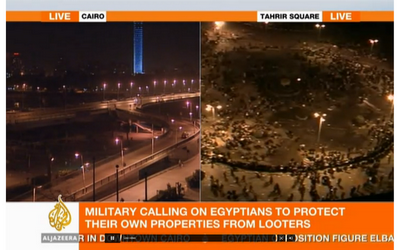 Little Bahrain, on the other hand, has one of the greatest concentrations of wealth within any nation, and for decades has used this capital to constantly upgrade itself into an international business destination. In the past decade, it has redoubled its efforts, as part of a regional trio with its larger neighbor, Qatar, and of course, Dubai, of which, like so much global urban development over the last decade, it sees as its model (Dubai itself being a derivative of the high-rise enclaving and luxury spatial products of the American sunbelt). 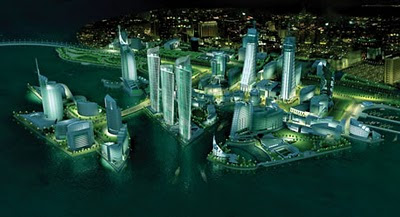 Recently, Bahrain answered these emirates' burgeoning urbanization and financial marketing with a building boom of its own, complete with glossy marketing campaign: Business-Friendly Bahrain. Broadly speaking, the architectural icons of this phenomenon, the face of this transformation, have been the vaguely-unique outlines the matching, sail-shaped pairs of Bahrain Financial Harbour and its twin, the Bahrain World Trade Centre, both built in 2007-2008. 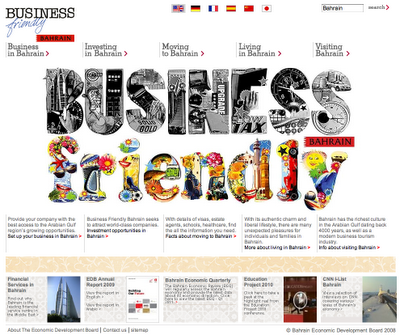 In the past month, the tagline has been morbidly modified by dark humorists to Bullet-Flying Bahrain. In the background of broadcast footage of tear-gas assaults and water-cannon advances stand the gleaming new (and even unfinished) skyscrapers of Manama's ready-made financial district and waterfront leisure zone. [Update 20 March: for more on Bahrain's bruised business reputation from Wall Street Journal and Businessweek]

Previous images from Bahrain.com. Note, words embedded in script at top, including "Gold" and "Upgrade"

Less soaring, but no less signature, are the massive enclosures of Manama's many, many malls. A country with only slightly more people than greater Hartford, Connecticut, has no less than six huge shopping malls. Even in this mature stage of global consumerism, the array of North American and European brand-stores within them is remarkable.

Instead of ancient casbahs or labyrinthine souks, much less colonial-era boulevards or squares, Manama has acres of air-conditioned bazaars, connected to shiny office towers and luxury hotels--a model of sun-belt aspirational overconsumption catering not only to the minority population of moneyed native Bahrainis, but aimed squarely at the expense accounts and expat compensation packages of defense contractors of Loudon County, energy technicians from Laredo, and bankers from London. These malls and skyscrapers are supposed to attract and retain these orgmen. 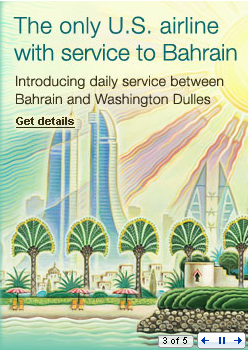 An online advert for United Airlines inaugurating non-stop service from Washington-Dulles, aerotropolis of the military industrial complex, to Bahrain, home of the US Navy 5th Fleet and major staging area for ongoing wars and defense-contractor nation-building in Iraq and Afghanistan. ©2009 UAL Corp.

Warfare has long since moved from grassy battlefield to the built-up city. Two decades ago, in Bosnia, the novelty of CNN operating a de facto broadcast base from Sarajevo's Holiday Inn, immortalized in popular culture, was a sad reminder of the city's previous promises of prosperity during its Olympics, and highlighted the peculiar interconnectedness of the planet, including its factional violence. Americans were challenged to imagine a mass grave, but not a chain motel.

Reprinted from NY Times Nick Kristof and NBC's Richard Engel from 18 Feb 2011, early in the street fighting when both reporters were on the ground.

In Bahrain, the protesters' physical focal point has been Pearl Square. In search of a Bahraini equivalent of the vast, Place de la Concorde-style Tahrir Square, the protestors have centered on a lowly traffic circus in the center of the city, with one of the few icons that the country had before the building boom: a white concrete sculpture topped with a sphere symbolizing a pearl, and recalling the time when the barren island's only wealth came from diving for pearls, and was not instead used to purchase them at Chanel at the mall. (Additionally, and in contravention of norms of decency and combat engagement, the country's main hospital was violently militarized by the government over perceived sympathy toward the protesters, who were the patients). 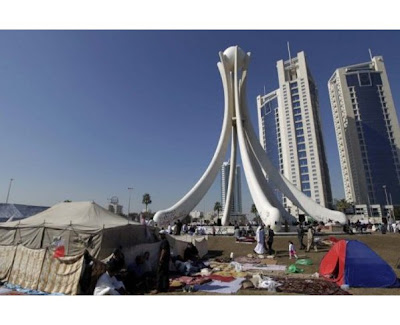 The Pearl Roundabout Monument, prior to 19 March.

For now, the Ritz-Carlton Hotel and Spa, the Payless Shoes outlet, and the Marks & Spencer of Manama are not yet the grounds of the bloody battles of the diminutive traffic circus that is Pearl Square. Most of the malls have been sealed, as if in mourning. But through the seering haze, the 5-star hotels, class-A office space, and supermalls of the Seef form a blue-gray backdrop to the foreground's fighting, viewable on Al Jazeera. 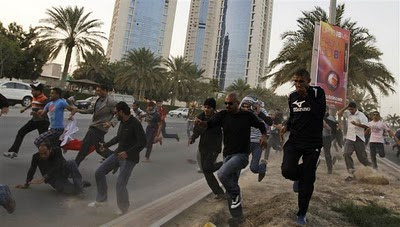 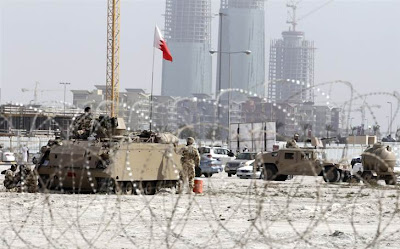 That the fighting has not occurred inside these buildings is not to say that these new developments are unrelated to the unrest. On 13 March, the New York Times reported that the protesters had blocked access to the financial district, and were attacked with tear gas:


The demonstrations on Sunday occurred on King Faisal Highway at the entrance to Manama’s financial district...“It is like a ghost town with the highway closed and the financial district closed,” Hussein Muhammad, a bookstore owner and activist, said by telephone. “Thousands of people came all morning, and hundreds were injured.” Two demonstrators suffered serious head injuries, witnesses said...The demonstrators have grown frustrated that they have been allowed to hold on to Pearl Square, a traffic circle, but have not achieved their political goals. That is why, they said, they chose to move on the financial center in a country that prizes its business-friendly policies...

Spatial disgruntlement, the built manifestation of the population's marginalization by the country's elite, is one of the roots of this unrest. This wildly-circulated power-point of Google Earth images, comparing the immaculately verdant edens behind the high walls of the country's elite palaces, against the tiny, irregular clusters of citizen's housing was reported to have infuriated the public. Even if, much like social-networking itself, it is difficult to measure its influence on street protestors' will and courage, they evince the disconnect within the society. These new skyscrapers and shopping centers are monuments to the political and social hegemony which the Bahraini people see as their oppressor. 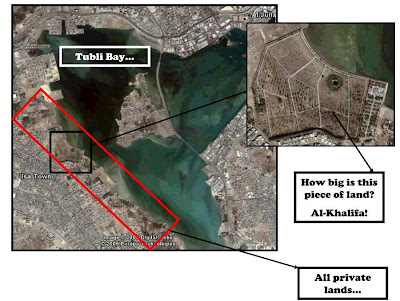 Image reprinted from BusinessInsider.com. Link in above paragraph to the incredible power point.

For many Bahraini citizens, the glass-and-steel towers of the seafront do not represent progress. It is a huge irony that a similar sentiment was so publicly and eloquently on display in the most recent Venice Biennale: Bahrain's award-winning project was imbued with a frankness and progressive attitude that is, in light of the last month, increasingly anachronistic (its tempting to wonder if the Google Earth slideshow was not inspired by this installation). 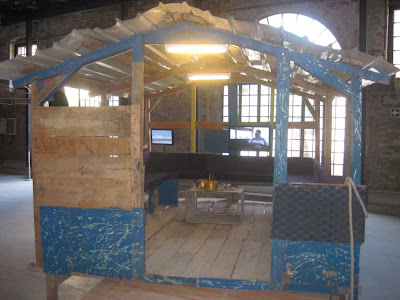 From an outside perspective, in the cosmopolitan banality of Manama's skyline, its possible to see not only Abu Dhabi or Kuwait, but even Las Vegas or Miami. While such street-war on Brickell Avenue or the Strip remain incomprehensible, somehow the strange juxtaposition of the rock-hurling resistance against the imposing instant skyline manifest a wider culpability in this conflict, a guilt that is as global as the brands in the mall directories.

We didn't need this violence to know that dueling Burberry boutiques are no substitute for fishing rights, or a decent education, or the chance at a meaningful career. But the events in Bahrain ask a more nefarious question, as to whether these exclusive zones, the purpose-built, privatized spatial products of debt-and--consumption, are fortress-like enough to protect the state from the dissatisfaction of its people, or have a role to play, in favor of one side or the other whatever the outcome of this revolution will be.

UPDATE 20 MARCH: The Pearl Square Monument was raised by the government on 19 March: 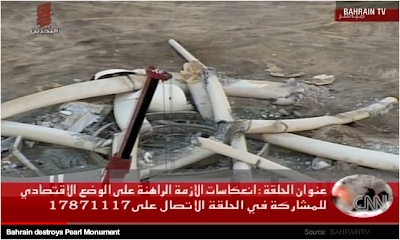 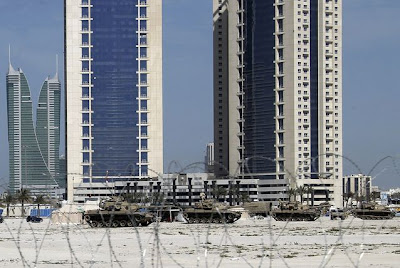 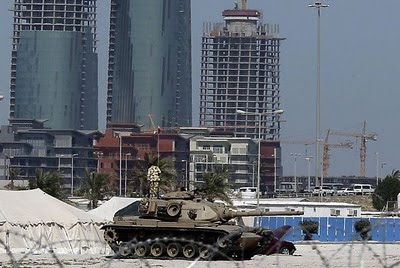 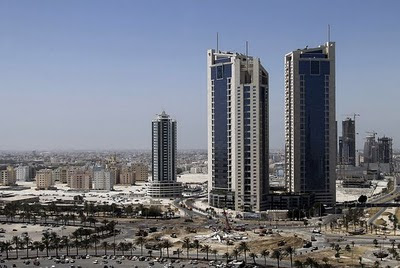