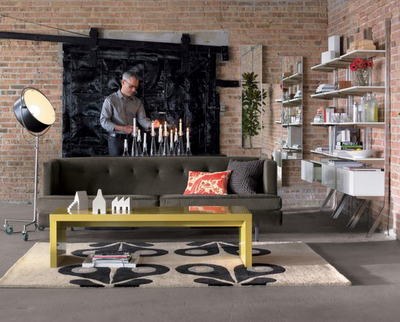 I've never shopped at a mall-brand or big box furniture chain in order to stock up on knick-knacks. I have usually been someone in real need of more bookshelf space, rather than things to go on bookshelves. I think there is something unadventurous in shopping for "accessories" to make one's home look more coordinated. Glazed pottery, full of nothing, chosen to match the area rug. "Wall-art" from Ikea. "Home Accents." "Décor." Uninspired inspiration.

Despite this, I don't have anything against Crate & Barrel or Habitat. I enjoy owning stuff too much to be an anti-consumer but don't can't afford to be a design snob. What's worth considering in all of this is the pervasive architectural vogue, a popular currency of fashion and consumption to convey the urbane aspirations of upmarket retailers. Budget nesters can buy a piece of architecture. No need to frame the degree: just shop. Tchotkes convey intellect. 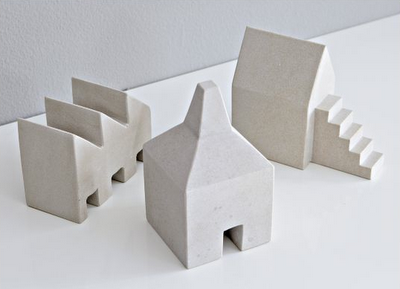 For example, here is a collection of Stone Buildings from the young, hip, less-expensive undermarque of Crate & Barrel: CB2. Little model houses, perhaps created at the direction of an individual with a formal architectural education. Or at least someone flipped through a monograph or two.

At first, I thought I knew the genesis of the pitched-roof item at right, but I can't figure it out now. Is a simple house with oversized stairs really an original idea? I had thought surely it stood in the corner of some Rossi drawing or was shown in colored-pencil perspective in Ungers. Such a folly of High PoMo, I can see it in a Graves watercolor, standing on a green hill. Perhaps its just the models' toy-block essence that makes me think of the bright crayon and pastel-shadowed geometry of the postmodern drawings of my childhood. 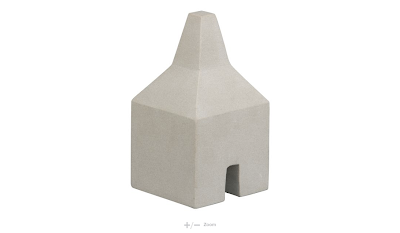 In the foreground, a conical crown of a hut's roof has been faceted, resulting in a sort of truncated Torre Hejduk. 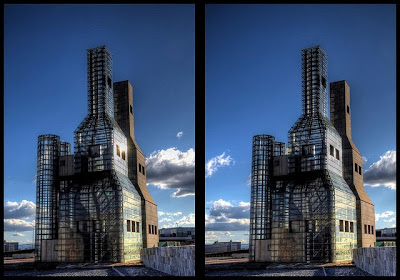 At left, the iconic "saw-toothed" roofline designates an assembly plant, recalling the industrial inspiration of the Bauhaus, (though the Bauhaus campus was generally flat-roofed). 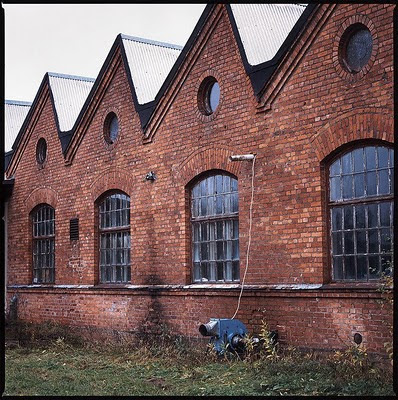 Lest I think too deeply into the potential references to architectural history in all of this, the trio are labeled, respectively: House, Temple, Condo.

That's right: the factory has become the condo. How au courant.

On Special now at CB2. Buy them alone, or get the whole set at discount.