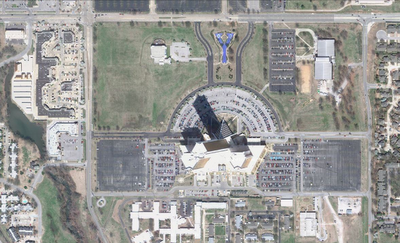 
In researching the previous post concerning Cote D'Ivoire, and reading about the political conflict there, I was directed to a press release by the office of US Senator James Inhofe of Oklahoma, who, in direct contravention of not only the US Government's official position on the situation, but also the overwhelming majority of the wider international community, is squarely in support of the incumbent, Gbagbo. Senator Inhofe shares this position with other, more infamous Americans such as televangelist Pat Robertson, who has a history of transacting with autocrats in the region. It has been repeatedly speculated that this group largely supports Gbagbo because of his Christianity, while his opponent, Ouattara, is Muslim. 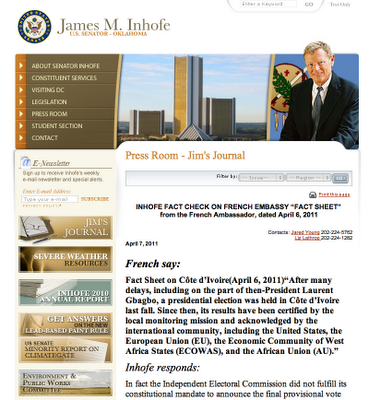 In reaching the posting on Senator Inhofe's site, I was surprised to find an image of a strange, Emerald City-like profile of golden-glass towers on the site's header, next to the posing Congressman. The dated assemblage, resplendently rising over a flat, lush green landscape, momentarily caused me to think, as I was in the midst of deciphering the various monuments of Yamoussoukro, that Inhofe's office had put up a stock photo of a complex in Abidjan or even Yamoussoukro that I didn't recognize, to accompany the position statement on Cote D'Ivoire.

But the towers soon disappeared, as the image box rotated through a slideshow of Oklahoma scenes, suggesting the towers were landmarks of Oklahoma. 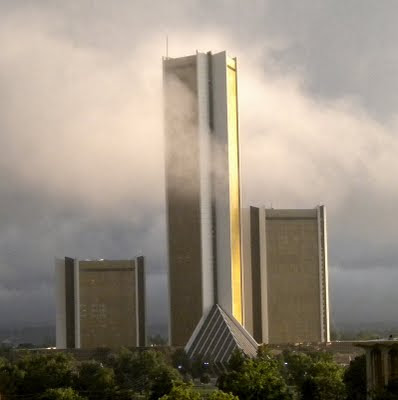 Instead, some research revealed that this is the Cityplex, a large complex just outside of Tulsa, Oklahoma. Wikipedia reports that the development was originally a project of televangalist Oral Roberts, to be called the City of Faith Medical and Research Center:


In 1977 Oral Roberts claimed to have a vision to build the City of Faith Medical and Research Center, which would be a successful hospital.[1][2] While City of Faith was under construction between 1979 and 1981 Roberts claimed to have more visions of Jesus who encouraged him to continue the project. This included his famous vision of a 900-foot (270 m) tall Jesus in 1980. In a letter, Roberts spoke of the vision: "when I opened my eyes, there He stood...some 900 feet tall, looking at me; His eyes...Oh! His eyes! He stood a full 300 feet taller than the 600 foot tall City of Faith." [3]
The hospital accepted its first patient in November 1981. By 1986 the City of Faith was losing over $10 million dollars a year.[4] In 1987, with costs spiraling out of control, the medical center went largely vacant.[4] Roberts told a television audience unless he raised $8 million by March, God would "call him home" (a euphemism for death).[5] The donations goal was reached but Roberts soon began looking for buyers or people to manage the facility.[4] In 1989, only eight years after it opened, the City of Faith was $25 million in debt and Roberts closed the hospital (the last patient left on 16 October).[6] Most of the complex was converted to office space and leased out as CityPlex Towers.

Cityplex is halfway around the globe from the underused, half-empty Fondation Félix Houphouët-Boigny, or Basilica of Our Lady of Peace, and the other pharaonic monuments that divinely inspiration decreed to rise from the red dust and verdant fields of Yamoussoukro. The graphics team for the Oklahoma Senator's office website likely thought that an allusion to Oral Roberts, legendary in the heavily-evangelical state, was generally a good association for the very conservative politician.

Unlikely that they considered the parallels between Oral Robert's grand projet and the architectural embodiments of Ivorian politics. Yet the scrublands of northeastern Oklahoma and the bush of central Ivory Coast are connected by a hubristic tangent, juxtaposing these contemporaneous constructions, aesthetically akin, supercilious and sanctimonious.