The Corporate Parks of Kevin Roche 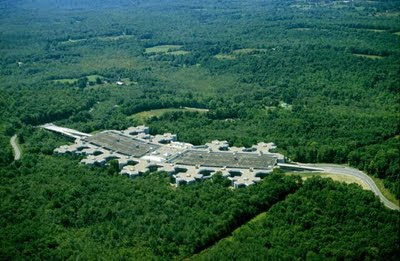 
I was fortunate to be passing through New Haven, Connecticut earlier this month and had the time to visit the Architecture Gallery at Yale to see the exhibit on the work of Kevin Roche before the event ended (There is also a book on his work published to coincide with the show). 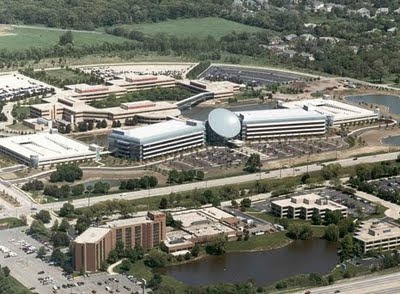 Kevin Roche John Dinkeloo Associates designed some very lovely buildings in their time (here is a wonderful first person account and homage to the Ford Foundation headquarters by one of the firm's erstwhile employees, Lebbeus Woods). A major focus of the exhibition the firm's well-known urban interventions, in New York,Atlanta, Singapore, Dublin, New Haven, and elsewhere. 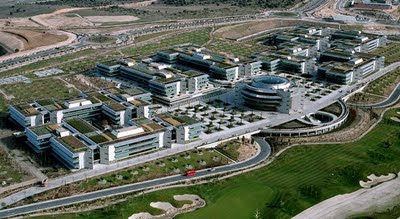 Less famous, yet quite as substantial, is a collection of massive corporate headquarters, a series of tremendous exurban campuses in Connecticut, Westchester County, New Jersey, Illinois, Spain, France and elsewhere. Most of these were purpose-built for some of the most prominent names of the multinational era: Union Carbide; Merck Pharmaceuticals; Alcatel Lucent Telecom; General Foods; Conoco-Phillips; Spain's Grupo Santander, among others. This specialization in the practice stretches back to the early days of the firm, as it was a continuation of Eero Saarinen's office, with Roche and Dinkeloo closing out the execution of such classics as the John Deere Headquarters in Moline, Illinois. 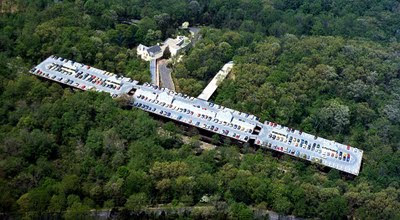 Richardson-Vicks, in Wilton Connecticut, connected to the original farm house, with the parking on the roof

The relative lack of appreciation for this typology is easy enough to understand. These privately-held, peripherally-located compounds are by their nature and intention not easily accessible to the public--although John Deere loves getting visitors 365 days a year.

This fortessing has served its intended purpose, especially as many of these corporations are not universally adored, Merck being a Big Pharma behemoth; Conoco-Phillips being a petroleum supermajor; and Union Carbide going down in history as one of the most reviled corporations of the 20th century. Such controversial entities do not generally welcome architectural tourists (see earlier post on attempting to visit to Paul Rudolph's Burroughs Wellcome HQ in North Carolina). Thirdly, the very typology of a sprawling, exurban groundscraper, embracing wasteful land use and abandoning the centers of America's cities, has been impugned in decades hence. 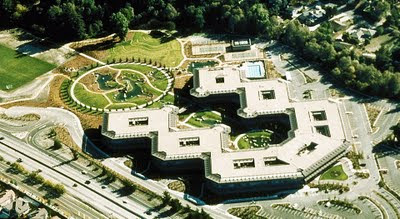 So this exhibit was a rare and unapologetic celebration of this spatial category, and a juxtaposition of some of the most dedicated and substantial efforts of this genus from one of its major practitioners. Together the several examples embody the tremendous gestation of both corporate post-modernism and post-modern corporatism. 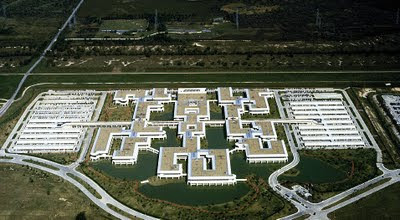 Conoco-Philips Headquarters, in Houston, Texas facing Interstate 10 across a series of shallow ponds.

While its easy enough nowadays to find images of these works online, the show, with its large format photo prints on the walls, evinced well these sprawling, outscaled creations, which are difficult to access and can only be fully examined from above. Several original models were carted out of the firm's storage, allowing exhibition visitors to fly over these verdant campuses like an executive in a company helicopter.

From this vantage, the cog-like office pavilion of the Merck Headquarters took up but a tiny portion of the table top presentation model of the whole estate. A cloverleaf exit ramp looped into a flyover over New Jersey County Road 523, becoming Merck Drive as it slips past a placid landscaped pond and hundreds of acres of verdant woodland.

General Foods, Rye Brook, New York,
hailed both as a 20th century version of a classic English manor, and a Mesoamerican-inspired postmodern palace,
faces a highway with a 3-level parking garage at its base.
General Foods was acquired by Philip Morris soon after it moved into the building,
and the building has had difficulty being utilized since.

What might be the most spectacular of the group is the astoundingly massive Bouygues World Headquarters, in Saint-Quentin-Yvelines, France, outside Paris. A humungous, shiny aluminium Versailles: three multi-tiered office sheds arranged in a wide clearing in the suburban forest. 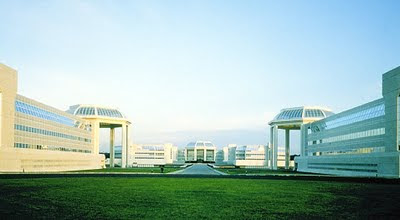 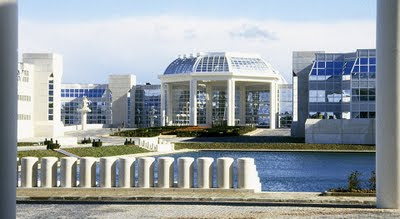 This tripartate group is aligned on an axis across a central rectangular reflecting pond. The two sides are connected by a cement causeway, which ends at a circular drive, a winding, divided entryway connecting eventually to the peripheral auto-route, which is really just a short distance away through the trees. 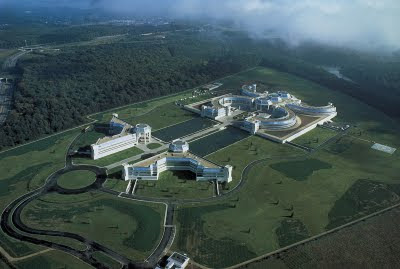