The waiting room of Boston's South Station is a soaring volume, like a high school gymnasium, It is currently made more so, as at present it is adorned with a group of enormous fabric advertising banners, hanging from the ceiling girders, like varsity championship pennants. The adverts were for JetBlue Airways, informing the rail-riding public of all the cities that JetBlue serves non-stop from Boston Logan Airport, which sits a few miles across the harbor from the train station.

Perhaps railway passengers should not, in this age of carbon footprints, be encouraged to travel to Baltimore or Newark by airplane instead of rail at all. Separately, the artistic talent evinced by the banners' graphic design, which seems could be accomplished by an Adobe Illustrator novice in a few minutes, do not deserve much merit in a purely aesthetic sense. However, the ads are interesting in the way represent their subjects, and what this suggests about American cities and their architectural identities. 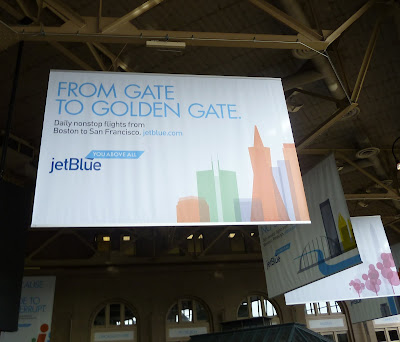 In this series, multicolored simulacra skylines stand in for the cities of Baltimore, Charlotte, Chicago, Newark, Pittsburgh, Raleigh and San Francisco. Some of these cities are undeniably better-known than others. Non-Americans might not even really know where Charlotte or Raleigh are (both in North Carolina)--which might cause some mutual surprise, given their size and economic might. Several of these cities do not make the top of the list of destinations for either Americans or foreigners, so as advertising subjects they are unusual, and further it is curious to consider the artistic choices made in their simulation. 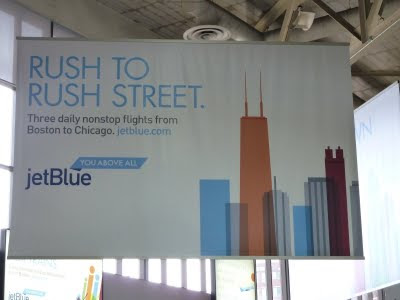 Two of them, San Francisco and Chicago, are both celebrated as among America's most beautiful, historic, thriving, celebrated metropolitan centers, and also are home to what are arguably some of the country's most recognizable skyscrapers. San Francisco is home to the unique Transamerica Pyramid, an icon of that city. Chicago is home to many well-known tall buildings, but there another pyramidal form, the John Hancock Tower is widely recognized as a symbol of that great metropolis. 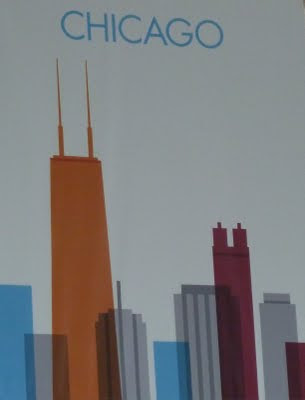 The Chicago poster may be my favorite of the lot. It conveys a portion of the Chicago's enormous skyline at a wonderful, theatrical moment in the northern approach down Lake Shore Drive, when that parkway aligns with Michigan Avenue's Magnificent Mile, marking the beginning of the city center. This humungous entry gate is anchored by several tall buildings, three of which are shown here: the John Hancock Building and the Four Seasons Hotel, with its quad-anchor of faux lanterns on top, and the art deco Playboy/Colgate-Palmolive Building.

Prior the the Hancock's construction, the Playboy building dominated this south-facing perspective of the city center. Originally the headquarters for the Palmolive multinational, the building was refurbished in 2006-2008 into a luxurious condominium tower. 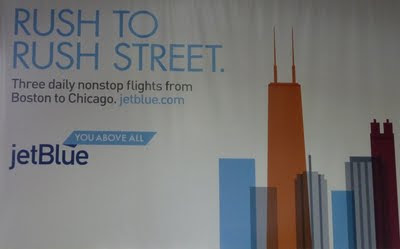 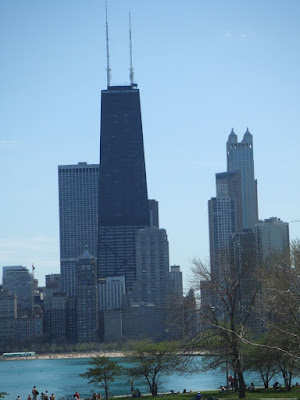 Probably the most well-known icon of all the buildings represented in the JetBlue ad series, the Transamerica Pyramid dominates the representation of San Francisco. The artist has given some more detail to the composition, pairing the pyramid with the unique outline of the Mandarin Oriental Hotel, its multileveled guest room wings connected by a translucent spine of glass sky lobbies, its roof capped by decorative masts, giving the whole block a futuristic, insect-like form. Thirdly, the much shorter Embarcadero Center West makes an appearance at the bottom left in orange. 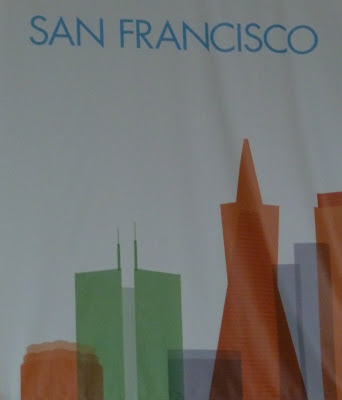 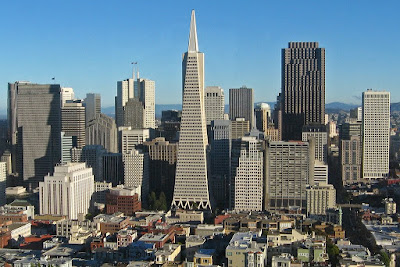 image of San Francisco courtesy of Flickr user m.john16 2007.
Mandarin Oriental and Embarcadero Center West can be seen at left.

Charlotte's visage shows the Bank of America and Duke Energy Headquarters buildings. BoA's tower was one several shiny, paramount regional banking headquarter towers that Cesar Pelli completed in the 1990s in the United States, and in both use, appearance and compositional participation is strikingly similar to his Key Bank Tower in Cleveland. 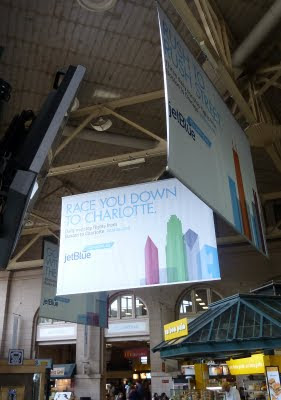 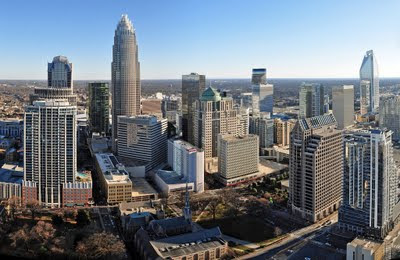 Raleigh is another North Carolina late-20th century service-industry boomtown. The tallest office building is named for BB&T Bank Building (Officially, 2 Hannover Square) and was built in 1991. At left, the Royal Bank of Canada Plaza, which was completed in 2008, includes several floors of condominiums and is capped by a small steeple. 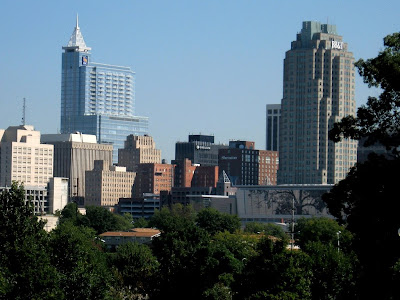 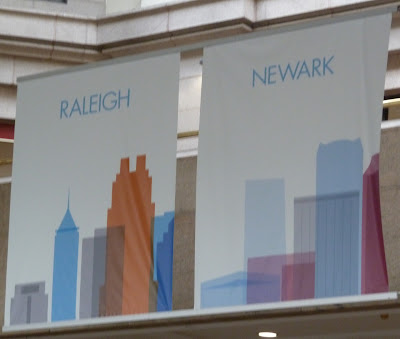 Its not entirely clear, but it seems that the Newark poster is meant to feature the skyline Jersey City, which was built up in the last few decades in the waves of decentralization of Wall Street, and thus serves as a Manhattan version of the Isle of Dogs. 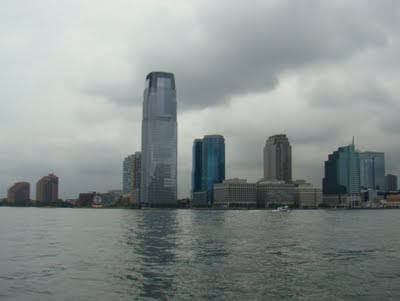 These low-rise triangles are intended to be the Baltimore Harbor aquarium, the anchor to the urban renewal project of twenty years ago, which transformed the waterfront into a tourism center, a feat which spawned imitation downtown acquaria and boutique retro-ballpark districts throughout the United States and elsewhere. 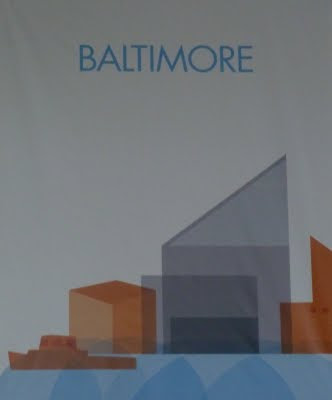 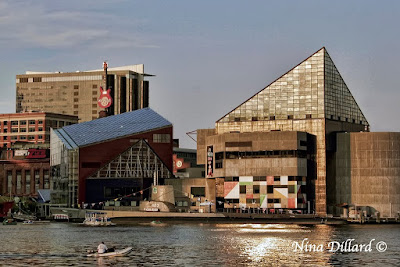 Pittsburgh's advertisement, though spare, successfully conveys the unique, romantic affinity that so many of its residents and former residents hold for it. It shows one of its yellow river bridges, as well as the "Fifth Avenue Place" building, twenty years on from its erection in the postmodern ebullience (pink granite from Spain, accent granite from Finland) of that brief rust belt renaissance of the mid-1990s. Today its lobby is a tired, half-empty shopping arcade.

The other element in the banner is presumably the old US Steel Building, built in the 1970s as a symbol of America's corporate-industrial might, and still Pittsburgh's tallest building. Its kind of an impressive edifice, especially up close. 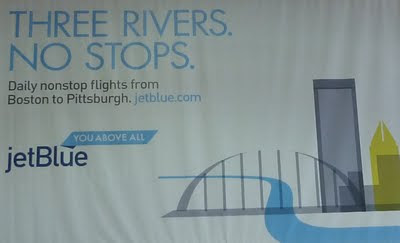 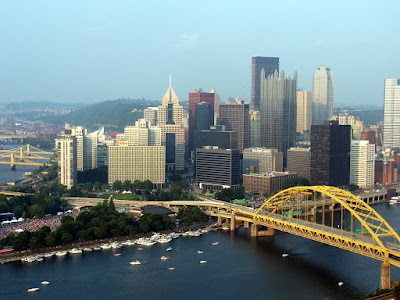 Aside from the Skyscraper Page crowd, it would perhaps be a challenge for many to identify these cities based on their skylines alone, much less these 5-minute Adobe Illustrator cartoons of each. Perhaps even residents of these cities wouldn't recognize a drawing derivating from the regional bank tower or luxury hotel high-rise which looms over their metropole. Generically, how many Pennsylvanians would see this and say, 'oh yes, there's old Pittsburgh, and they got the bridge right, too...'

More directly, in terms of its commercial persuasion, I wonder how many in its audience glance up and are convinced by those semi-opaque rectangles to fly to New Jersey. How many erstwhile denizens of Raleigh would see this ad and exclaim "How I long to see the RBC building in real life…that to me is home!"

unless otherwise noted, all images ©2011 Bauzeitgeist.
Posted by MM Jones at 5:28 PM