Just a few minutes after my last observations from inside Boston's South Station, I spotted a similar skyline-themed simulacrum once the journey commenced, on the wall of the Amtrak dining car (apologies for abysmal quality of the iPhone photography. My camera has been sent for repairs. Never buy a Panasonic).

The mural goes from right to left, north to south, covering the whole northeastern BosWash megalopolis: Boston-Providence-New London-New Haven-Bridgeport-New York-Trenton-Philadelphia-Wilmington-Aberdeen-Baltimore-Washington-Quantico-Fredricksburg-Richmond-Newport News-Norfolk, which corresponds to the route of the (sort of) high-speed Acela line. 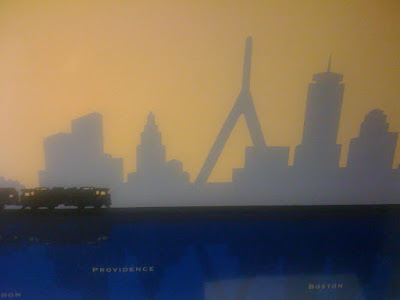 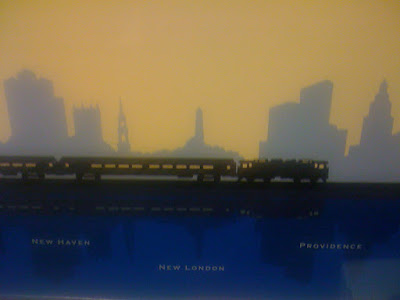 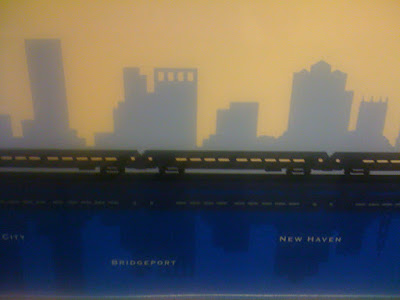 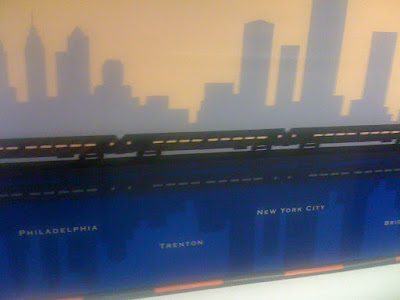 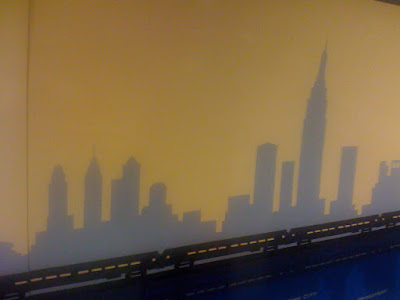 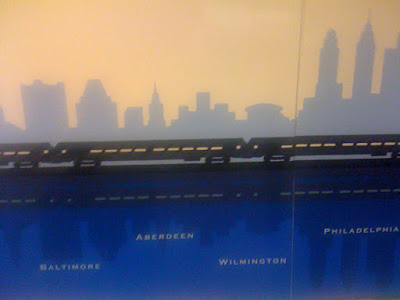 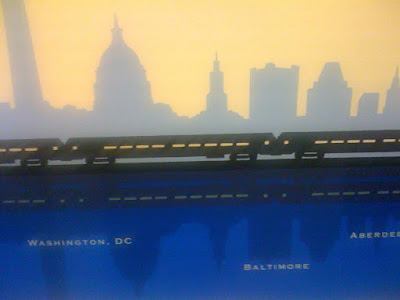 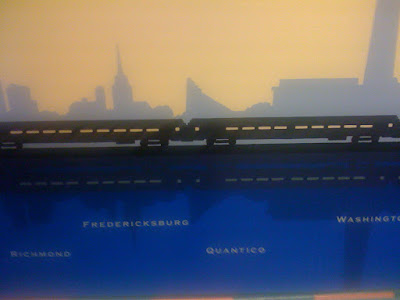 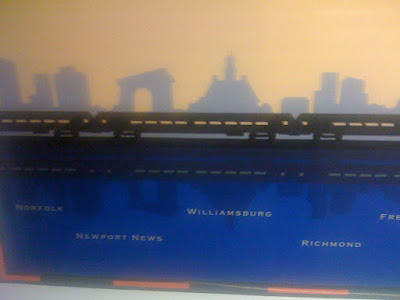 Like the JetBlue murals, each city is reduced to a recognizable, or semi-recognizable symbolism of its skyline. There is a mixture of both historic landmarks, well-known tourist attractions, and otherwise a long line of office buildings of various cities-- with each location getting roughly equal space, so that small cities are almost as highly profiled as the anchor cities of Boston, New York, Philadelphia, and Washington. 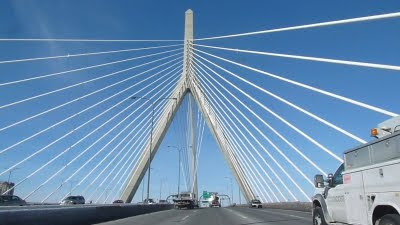 The northern terminus is Boston, which is indicated by a cable-less Zakim Bridge, with the Prudential in the background. 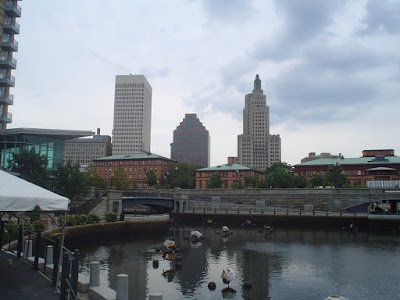 Strangely, both Stamford and Newark, which have intriguing, heteromorphic corporate skylines, don't make the cut, while 15,000-strong Aberdeen, Maryland and the New Jersey state capital, Trenton, are both listed. Perhaps Aberdeen is the hometown of some prominent Amtrak executive. It has no skyline to speak of, and Trenton just a few office buildings opposite the state capitol--neither seem to have any landmarks on the mural.

New London has a few multistory buildings in its actual downtown, which is dominated by a concrete transmission tower. This is polished over for the sake of the mural, as it is represented by what I presume to be the Groton Monument (which isn't even in New London, technically). 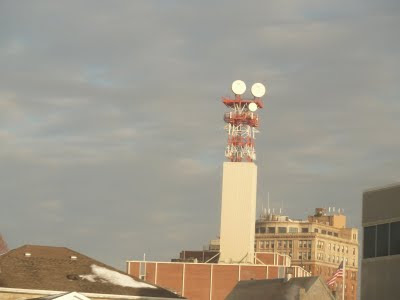 This is actually the tallest structure in New London, Connecticut.

Despite being both dull and hideous, New Haven's two tallest office towers are represented, Kevin Roche's unique and renown Knights of Columbus headquarters, despite its distinctive profile, is nowhere to be found.

The artists included this... 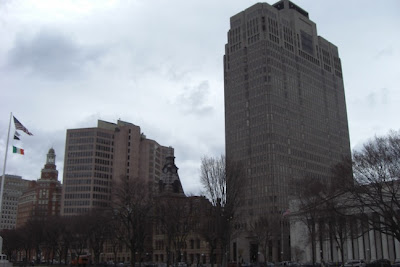 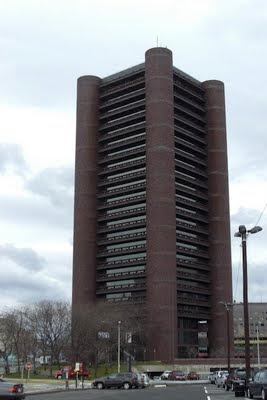 New York is basically reduced to some unidentifiable rectangles surrounding the unmistakeable Empire State Building, which flows directly into Philadelphia's Market Street triptych, which then imperceptibly melds with the totally unmemorable, anonymous back-office mid-rises of Wilmington. 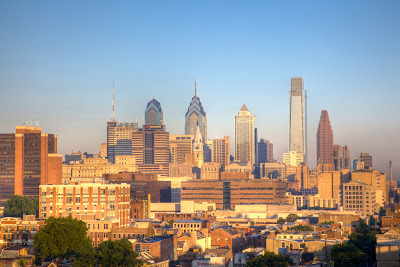 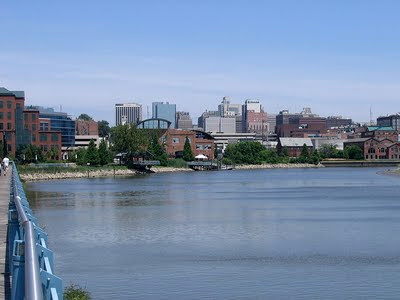 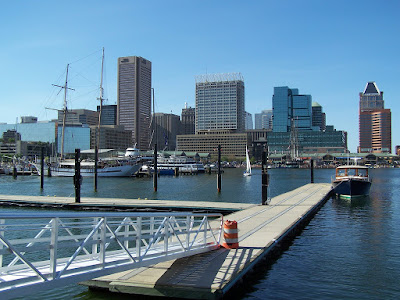 After Baltimore, the mural reaches its representative climax with the huge, oversized dome-and-obelisk pair, the Capitol and Washington Monument--only the Empire State Building rivals them in size.

Probably the most curious inclusion of all is the Quantico Marine Base, where, among many other top-secret goings-on, Bradley Manning sat in the brig until recently. Its recognizable by the pyramid of the Marine Corp Museum, which I guess is a tourist draw, but still an somewhat unsettling contemporary reference. 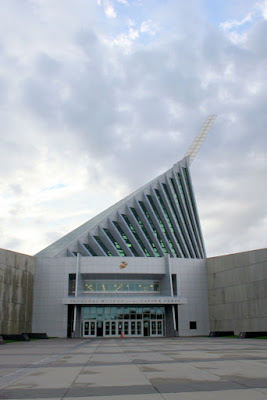 As with New London and Aberdeen, Fredricksburg, Virginia isn't exactly Shenzhen, and seems to be marked by some colonial church spire. Colonial Williamsburg Governor's Palace rises taller than the anonymous office blocks of Richmond. Probably the artists were encouraged to highlight popular tourist destinations, to hopefully inspire some commuters to become repeat riders, with family in tow on a vacation.

Like the urban region itself, the mural peters out anticlimactically in southern Virginia: Norfolk and Newport News take up the left-handside of the mural, before it reaches the corner of the wall, at the end of the dining car.