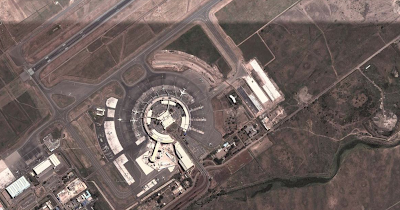 In early August, the terminal at Nairobi's Jomo Kenyatta International Airport, by far Kenya's largest and busiest, and one of the most important on the African continent, caught fire and was largely destroyed. 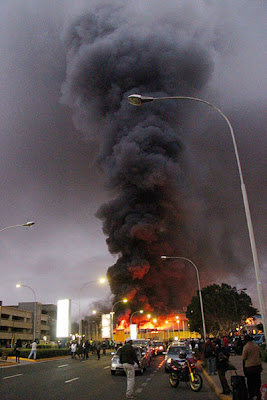 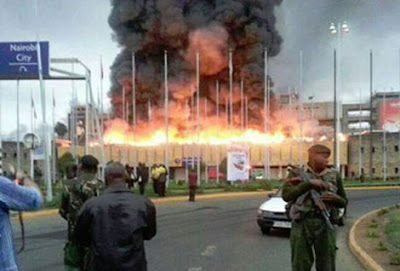 Top Photo from the AP via the Guardian.
Bottom photo from Business Traveller Magazine.

The end of this building's life, a dramatic conflagration throwing a huge tower of black smoke into the sky, was all the more newsworthy and ignominious a funeral pyre amid widespread press reports of emergency service tardiness and ineptitude, as well as scandalous stories of the police and other bystanders looting duty-free shops, money changers, and luggage hall before fighting the blaze. 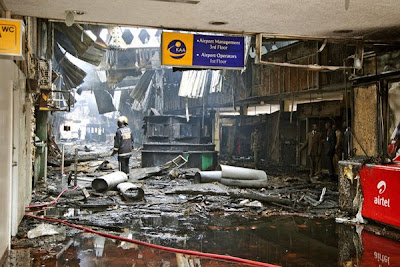 The Arrivals Hall on August 8th, photo from the Christian Science Monitor.


Only this last April, I stood in this very arrivals hall at a late hour, looking for a ride that hadn't appeared, deciding how many shillings to withdraw, and which bank card would successfully approve an ATM transaction in another random African country, and preparing myself for a stern confrontation with a taxi driver to successfully haggle for a ride into the city. It is a typical set of chores upon exiting customs, in a not atypical mental state, having flown all day, starting the journey at an equally early hour, traveling across the continent through three other airports. I took the above blurry photo of the arrivals board as I was waiting for a car that never came. 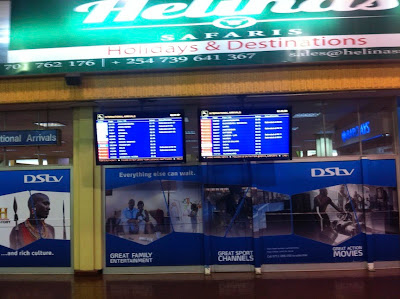 Jomo Kenyatta's main building is not atypical, either: tired, outmoded, worn and under-cared theatre in which such contemporary toils are performed. My first visit to the airport, 4-1/2 years earlier, in November 2008, was infused much more with the optimism and excitement of being in a new airport, a new city, and a new country for the first time. Indeed, my first moments on terra firma australis was in that undersized room, as I was for the first time south of the equator. 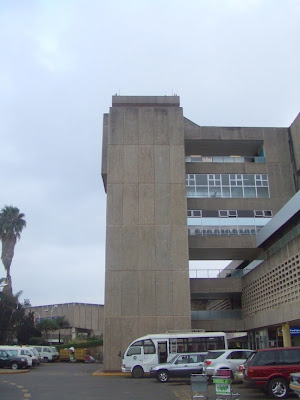 That November morning I also had to search for transportation into the city, and so went outside, wandering toward the taxi rank with my luggage. In that bewilderment, two observations struck me: first, it was roughly as cool that morning as it would be many parts of England or the US in autumn, despite the equatorial coordinates. I wore a t-shirt, the taxi drivers and touts wore wool sweaters. I had naïvely assumed that everywhere in Africa was blazing hot all the time. 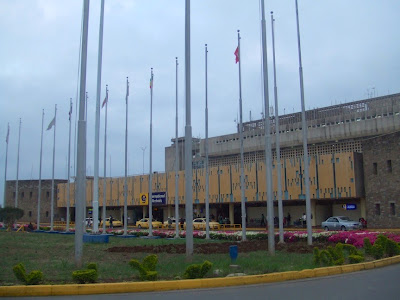 My second sensory intake was of the broad boughs of British brutalism wrapping around the parking forecourt. The terminal building was a muscular rendering of rough, sandy concrete in a thick, rectangular proportioning. It looked like a terminal at Heathrow, a rammed-earth replica of the Queen's Building, complete with a low blanket of grey overhead. It was a scene at the way station of the empire, the building a Victoria Terminus on the high-altitude savannah. I was so surprised and pleased that I took out my camera. 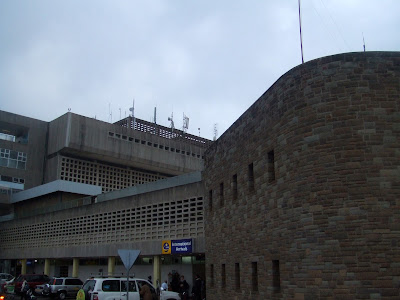 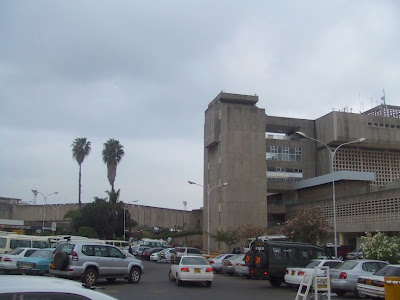 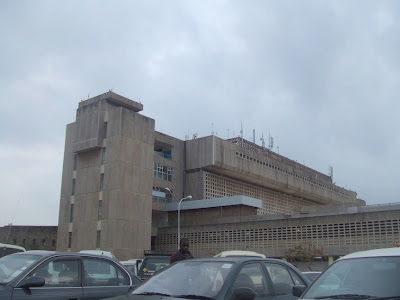 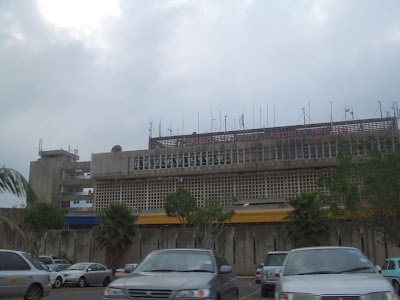 
The structure, along with the rest of the international airport, was designed in 1971-72 by the international firm founded by Scottish Brigadier General Alexander Gibb, and completed by 1978. The project was financed by the World Bank, and somewhat astonishingly the original proposal document is in PDF form on the bank's website, noting East African Airways links to West Pakistan and South Yemen and Denmark, among other delightfully vintage details of that era. The report's appendix includes these lovely drawings of the terminal and airport in plan. 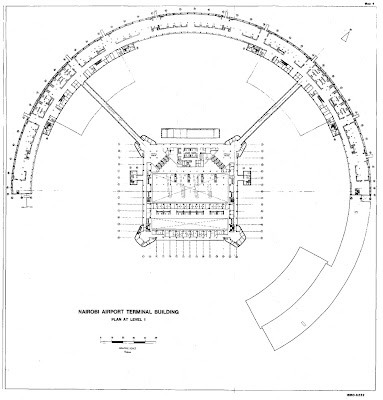 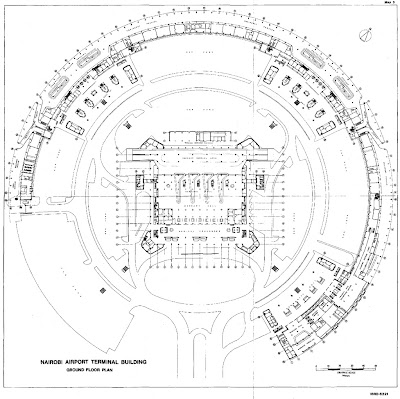 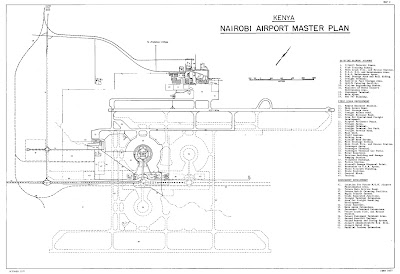 
Note the placing of a future, identical, second terminal in the center of the airfield. Aside from the World Bank PDF, there is scant history of the terminal's design on the internet: searches are dominated by news and images of the charred ruin of three weeks ago. But presumably Gibbs Petermüller were influenced by contemporary airport designs, especially the Berlin-Köln-Kansas City heritage of semi-circular terminals, the latter of which, having just opened in the Missouri flatlands, was envisioned as the supersonic Mid-Continent transit hub for Trans World Airlines. The Master Plan for Kenya's Department of Aerodromes likewise foresees a jet harbor for an emerging region with the limitless horizons of a post-independence future.

Forty years later and its all wrong. Whether Nairobi's airport was ever loved, the jet age is now no novelty, and the airport has often been ranked among the worst in the world, in part because of  Kenya's realized success: its capital city has indeed become the regional hub, and the airport handles more planes and passengers than it was ever designed to accommodate. However, much like the TWA Flight Center at JFK or the Pan Am Worldport, or Kansas City or Tegel, how airports have to flow and what is expected of them from authorities as well as passengers has changed completely. 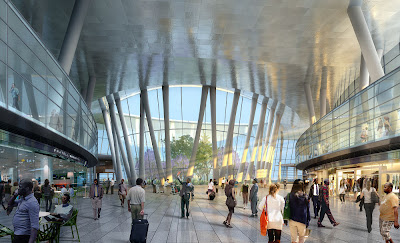 Above presumably by Gensler for the Kenya Airports Authority


Even before the fire, a new passenger pier was under construction and plans were devised for something more fitting an emerging Global City.  A master plan for a future Bangkok-style midfield terminal was plonked down on a Google Earth screenshot rather than pulled forth from the draughtman's pen. The new concourse and the plan, by global firm Gensler, conforms to contemporary expectations of terminal design, generic, oversized and glazed, employs evocations of the savannah and Kenyan identity while ultimately seeking favorable comparison with much larger, more important airports around the world. 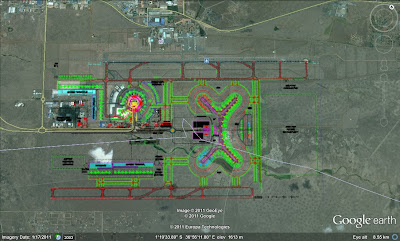 From the African Aviation Tribune

It is undoubtedly colonialist for the capital of British East Africa, with what can be felt to be a delicate, English climate, to possess a unapologetically British airport terminal, so it would be controversial in that sense to lament its razing. The new terminal will be a better performing building in a number of ways, certainly. But it will be yet another airport terminal that could be anywhere, any place, regardless of where the journey begins or ends.