The previous post's pictures of the Nairobi skyline excluded several of the city's tallest buildings.  In particular, it completely omitted the Kenyatta International Conference Centre (KICC), but not because it wasn't worth mentioning. On the contrary, this is an all-time favorite of building of mine, literally, ever. And since that last post was so long, and this building is so great, I thought I would give the megastructure its own dedicated post.

While no longer the city's tallest building, and at about 40 years old, hardly its newest, the 23-story tower of the KICC is unquestionably the architectural symbol of Nairobi, and Kenya, and may be one of the most recognizable structures in Africa (if still an order of magnitude below the pyramids). 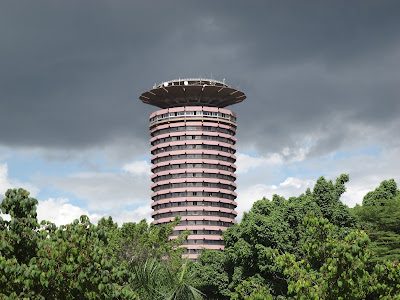 The arrestingly handsome, hyperfuturistic tower is crowned by a wide-brimmed disc, which acts both as a sun-shade and also lifts a helicopter pad aloft, and smoothes into a halo the dodecagonal shaft's geometry, which is accentuated by metallic bronze awnings, shading the glazed façade. A defunct revolving restaurant occupies the top floor of the office block.

This dynamic ensemble would be fantastic enough if the office tower rose from the street into the sky, yet the tower is but one element of the complex. Not visible from afar is the plenary amphitheatre, which might be an even more astonishing structure than the tower itself. 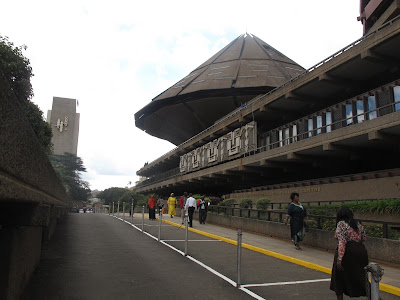 
A dusty origami lotus flower balances over the rectangle reception hall, like a giant spinning top at the edge of a table, and seems to be giving off a similar kinetic, centripital energy. It is so tempting, when coming upon the KICC from ground level, to employ that most tired of architectural metaphors, the landing UFO, yet here both the tower and the congress seem to be of the squadron of an alien civilization. In fact, the inspiration for the amphitheatre's shape and shade were the conical thatched homes of rural Kenya. That even the more rational geometry of the ground-floor reception hall is reached by criss-crossing ramps from the street further suggests the landing docks of spacecraft. 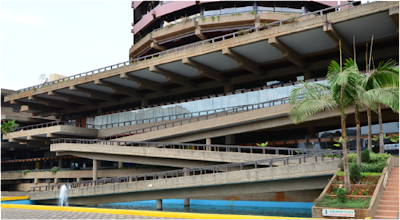 
This is all the more remarkable when considering the architecture's vintage, in that it proceeded the first Star Wars movie by years, which invites speculation that the palace of Jabba the Hutt and the villages of the Ewoks could have been inspired by these edifices years before sci-fi animators imagined these later pop-cultural icons. One of those questions of architectural influence and inspiration that may never be answered. 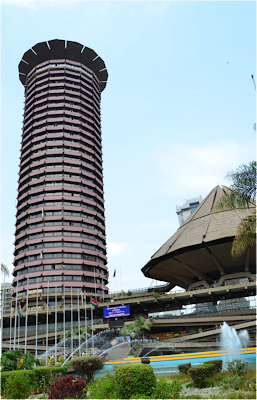 The real story of the KICC is much more typical of a modern African landmark, which was commissioned as a headquarters for the country's ruling party, KANU, during the reign of the post-independence president, Jomo Kenyatta, and built with public funds. It later times its odd origins have lead it to be formally be transferred to state property, and has morphed into a venue for conferences.

Its architect, David Mutiso, was chief architect at Kenya's Ministry of Public Works, and although he went on to a successful practice and is still alive today, but much unlike the career calculations of today's starchitects, this building was neither hailed as a masterpiece nor did it form a aesthetic basis for a signature style to be applied and replicated on later projects, which only adds to its visual impact. There are certain buildings in the world like this, that are so singular and unique and yet never generate any offspring. 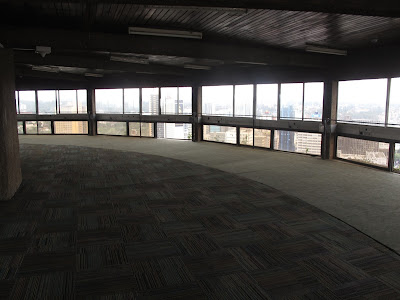 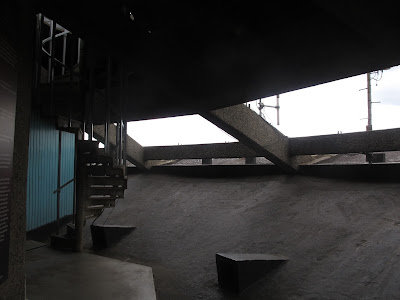 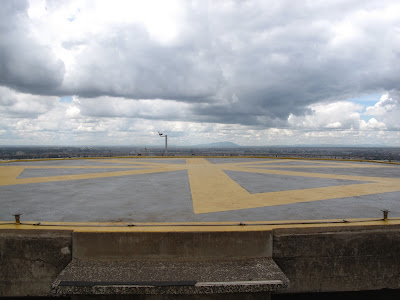 
...which lead up to the heliport, still very much in use, and reveals a panoramic view of East Africa's major city, from the airport to the shiny zinc rooftops of the city's infamous slums, to the sloping angles of malls and hotels peaking up from the verdure of affluent Westlands, all surrounded by mountains and edge of the stretching plains, as burgeoning Nairobi still houses a national park in its city limits, famous for its photo opportunities of African wildlife roaming the savannah in the foreground with an ultramodern skyline in the background. 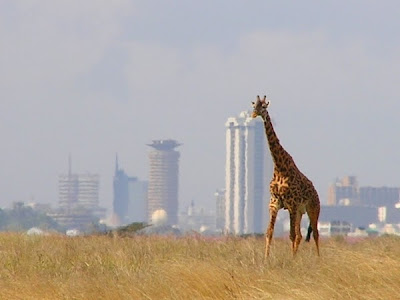 via Wikipedia and Next City.