While I'm anxious to move on geographically from the last few posts about Nairobi, as well as received as they have been (thanks to everyone who read and shared the last few posts). But I did want to post on a particular development near Nairobi that has been on my to-write list of this blog since very early on, and which, before I could get to it,  "has made the rounds" on the internet, as is the contemporary phrasing.


[The Atlantic Cities blog is really something of the Walmart of Architecture Blogs. It's the clearest example in this corner of the internet just how different and more corporate blogging is, in the barely half-decade since the medium of the blog became common. The once-revered Atlantic magazine, in its post-print plans, seems more intent on catching hourly page-views than the slower-paced, higher-intellect journalism that its paper version pioneered in an earlier century.]

"Kenya's Konza Tech City" is one of several new satellite cities planned across the continent of Africa. Inexplicably, it was CNN.com, of all places, that did a run-down of several of the more prominent of these new-built towns in Africa earlier this year, although the lede, "A glimpse of Africa's Urban future or utopian fantasies?" embodies everything brain-dead about that entire news franchise. I have mentioned some of these developments before, in one of my first blog posts, which was a massively verbose run-down on the extra-continental perceptions of African Architecture, c.2010, but I did not focus on these new satellite cities at length. 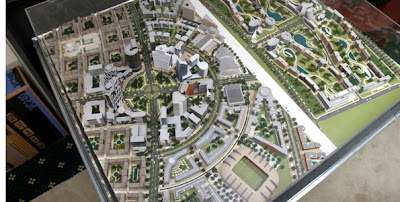 Inspired by his visit to Silicon Valley in the United States, the home of the U.S. high-tech industry, [Information Minister] Ndemo says the project aims to attract international investors who either cannot find space in overcrowded downtown Nairobi, or who cannot find buildings that meet their standards.

"Kenya's $7bn Technopolis," a new development planned 60km southeast of the Kenyan capital as part of the government's "Vision 2030," seeks to pump up GDP growth to 10% per year and create hundreds of thousands of jobs, and, to hear the marketing video, transform Kenya and Africa, namely by inventing an East African Silicon Valley outside of Nairobi, thereby making Kenya a global hub for IT and call centers. Ground-breaking was delayed several times, but is apparently underway. Here is the promotion video:


Konza, and the other satellite instant cities which are springing up across Africa, manifest the vanguard financial forces that have arrived on the continent, viewing Africa as the final outpost for growth-busting capitalism, and replicate the collusional model of state-facilitated, investor-and-debt-sponsored property-development which occurs elsewhere.


These satellite cities hope to tackle two different aspects: accommodating urbanization and creating modern cities to complement development. They also seek to embrace their respective countries' advantages. For instance, Konza City in Nairobi, Kenya is a multi-billion dollar ICT city park. The Kenyan Permanent Secretary in the Ministry of Information and Communication expects Konza City to be Africa’s home of computerization, the equivalent of Silicon Valley in California, complete with skyscrapers, business centers, international schools and hospitals. It is no secret that Nairobi aspires to be the technology hub of East Africa.

The main parameters of Konza and Africa's other satellite districts are the same: a vast zone on the edge of the existing metropolis, transformed in the glossy renderings of business parks and condo towers, and breezy copy, serving as both real-estate boosterism and political spin, boasting the number of jobs, the number of square miles or hectares under transformation, the population in some far-off decade, the square footage of various purposes, above all class-A office space, the number of luxury hotel rooms, the number of condos, and of course the height of the tallest, iconic building.


Satellite cities are driven by business developers and as a result are being promoted by businesses and are consequently labeled as the future of well-organized urban spaces.

It is the banality of these dual replications that is repellently fascinating: the outmoded, debt-lead financial schemes (and the corruption that pervades such machines), realized through outmoded, unsustainable design schemes (as much as they are marketed as "green"). 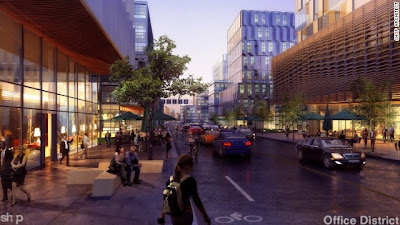 These new cities are openly being sold as flight from the old city center, which, with its dated buildings and poor people, is deemed unsuitable for contemporary lifestyles and business. It is central Nairobi as downtown Detroit. The internet-technology-as-economic-savior trope, while no less realistic, is only slightly less out of date. Under such narratives, it may be therefore less surprising but no less outrageous,  when local Kenyan press reveals that the government has sought to specifically outlaw slums within 10-km of Konza, a sweeping radius that is experiencing rampant property speculation among the elites. The proposed high-speed rail line, non-stop from Konza to Nairobi's international airport, bypassing any actual interaction the people or economy outside of the gated city, is more evidence of the logic that governs this development. 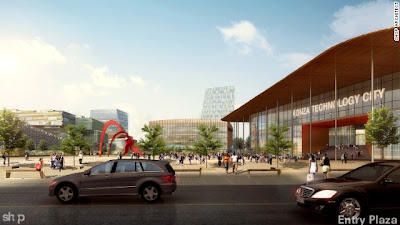 Aesthetically, what is perhaps the most ridiculous aspect of Konza City's marketing package is also its most revealing: the random appearance of Dubai's twin Emirates towers at the town center and, even more hilariously, the presence of Montreal's Olympic Stadium as Konza's sports facility. The fiscal catastrophe of the Montreal Olympics is forgotten in favor of the futuristic icon of recreation and revenue-generation via professional sports and sport-event hosting facilities; and there is simply no higher nirvana in dreams developing-world urban growth than Dubai. While the prominent placement of copies of other cities buildings in the renderings of Konza may simply be the result of lazy draughting-by-Google-image-search, but the symbolism is inadvertently perfect. 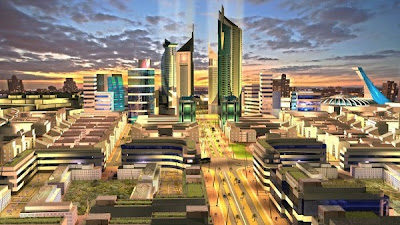 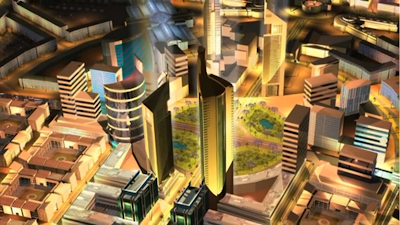 The Konza e-city will come complete with skyscrapers, hotels, international schools, a world-class hospital, a financial district, a high-speed mass transport system and integrated infrastructure. It will put the capital city’s CBD completely in the shade as it will come with smart fully-computerised buildings, thoroughfares and other infrastructure. Coming on top of other Vision 2030 infrastructure and ICT rollouts, Konza e-city will be the jewel in the crown of a new and completely transformed Kenya.
It has the potential to create 100,000 jobs, the vast majority of them in the Business Process Outsourcing (BPO) sector. The comparison with India in the FT headline story on Kenya is indeed a suggestion that Konza e-city could well become a global call centre, placing Kenya in the big leagues of the digital world economy.  --quoted from this website 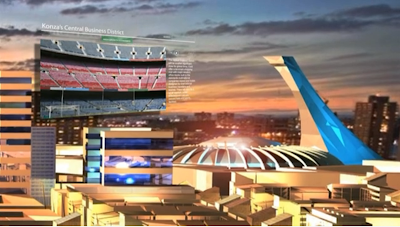 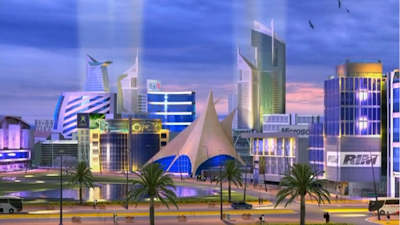 The startling, dispiriting realization at Konza and elsewhere is, that the final frontiers of human economic and community development are being radically realized as sloppy copies of the dysfunctional, and discredited spatial and financial structures of the most unsustainable cities elsewhere. If Dubai and Phoenix, Atlanta and Abu Dhabi, Dallas and Doha are seen as ecological and social catastrophes, then it is all the more dispiriting to find that dozens, perhaps hundreds of cities are rushing to be made in their image, right down to the shapes of their skylines.