“God, imagine the last thing you saw on this earth was Preston Bus Station.”

That might be the wittiest remark in the hundreds of comments to Owen Hatherley's report in the Guardian about the listing of the Preston Bus Station by English Heritage in late September. The remark was made by a commenter who claimed to be a local Lancashire lad, and was in reference to the (perhaps-apocryphal) tales of repeated, or even regular, suicide jumpers who ascended to the top parking level of the bus station to leap to their deaths. If not directly driven to do so by the horror of the building itself, at least the depressed were driven by the misery-inducing place to their end.  Busses weren't the only things departing from the station, it seems.


The gallows humor in the comments sections contrasts with Hatherley's own triumphant celebration of the Grade II Listing in the article itself. The commenters, especially those who reported to be from or lived in Preston, were nearly universal in their disdain for the misery-inducing Bus Station, although there were many who loved the building, echoing the lyrical celebration that rises in protest song each time demolition has been threatened—stretching at least as far back as Jonathan Gancey's typically-overdone “A Baroque Catherdral for Buses” passion from 2007. 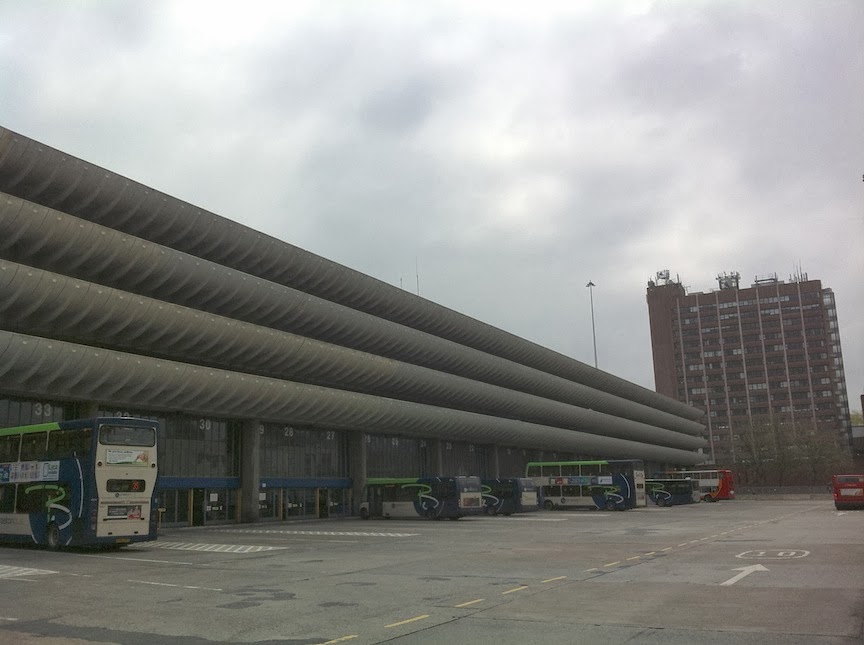 What many of the disgruntled seemed to complain about was the disconnect between the non-local architectural enthusiasts, who appeared quick to defend any large building made of concrete in the middle of the 20th century. Others seems to judge simply on sight of image search results: mesmerizing photographs of a half-kilometer stacks of ribbed concrete panels, as elegantly imposing as an underlit steamship, or silently striking in its simplicity as Roman ruin. It is possible to find gorgeous photographs of the Preston Bus Station, of which the above might currently be the most familiar and the most exultant. But it is one of a class that focus on just a single, if most prominent, aspect of the building: the megastructural “swoop” of the parking levels— this is also the subject and styling of the close-in lithograph, below, celebrating the building as a modern monument of Britain from indie shop We Are Dorothy, along with the now-gone Tricorn Centre and the nearby Forton Services.


(Incidentally, these four upper levels actually don't have anything directly to do with bussing, but instead are for automobiles. The boarding and disembarking of busses occurs only on the building's ground floor. In this sense, the Bus Station has more in common with, say Paul Rudolph's Temple Street Parking in New Haven)

You will find few illustrations accompanying laudatory adulations for the building that exhibits the interior of the bus station. This is problem: a particular angle, revealing a uniquely-attractive visual circumstance, does not make a great building. A building needs to lend more to the heritage of architecture than it's exterior elevation, especially a municipal utility in an economically-blighted city. The question should not be whether the Preston Bus Station should be saved but, something more along the lines of, can Preston's circumstance be improved by saving the Preston Bus Station? Follow-up question: What does "Saving the Bus Station" actually mean?

Several months before the Listing was announced, I happened to be traveling north across Britain, and was able to spend a half hour exploring this landmark (like many, I had long ago in my early architectural education seen a startling picture of the exterior). I knew so little about the building other than its place in brutalist history, I was excited to see it and curious about what made its so well-known. 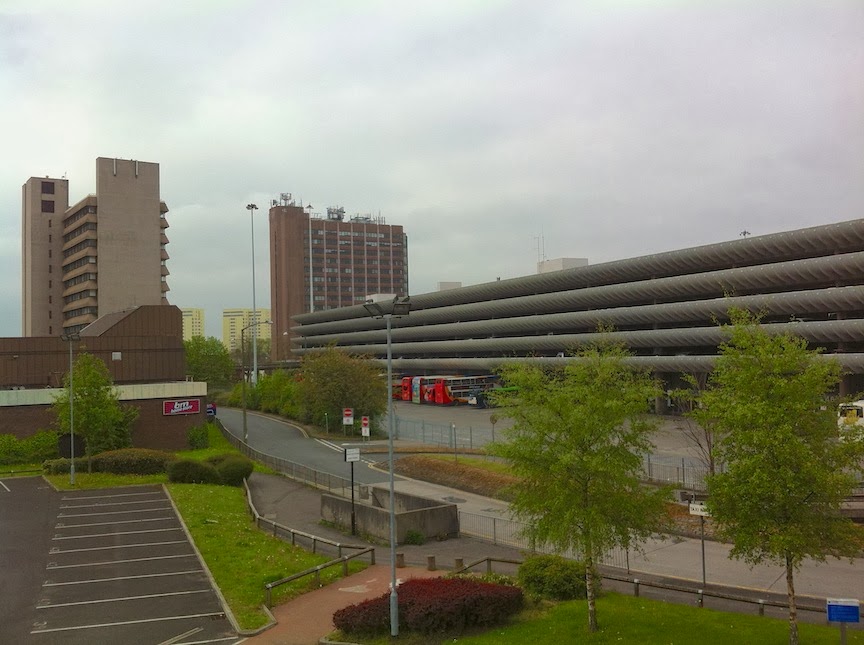 On a very overcast, breezy afternoon, not a cold day but still drab, I arrived at the Preston Bus Station (not by bus). The bus station is ringed with concrete at its base, as either side is a wide tarmac for coaches to maneuver and park. In much the same way as an airport's apron can make for exciting viewing, the bustling of the departing motor coaches makes for momentary enjoyable viewing, although its not exactly watching jumbo jets hurtling down the runway and launching up into the sky, next to touch ground in Asia or Africa.

I didn't have time to explore the town of Preston properly, but I can concur with the Guardian and Daily Mail commenters that this section of town is pretty depressing. With the bus terminal in the center of a vast plaza of asphalt, the arrangement nearly mimics the main square of a central European city, but this one ringed by exceedingly sad buildings, a half-dead shopping plaza with more surface parking, some abandoned buildings, and some contemporary 1970s mid-rises that constitute the Skyline of Preston, I suppose. 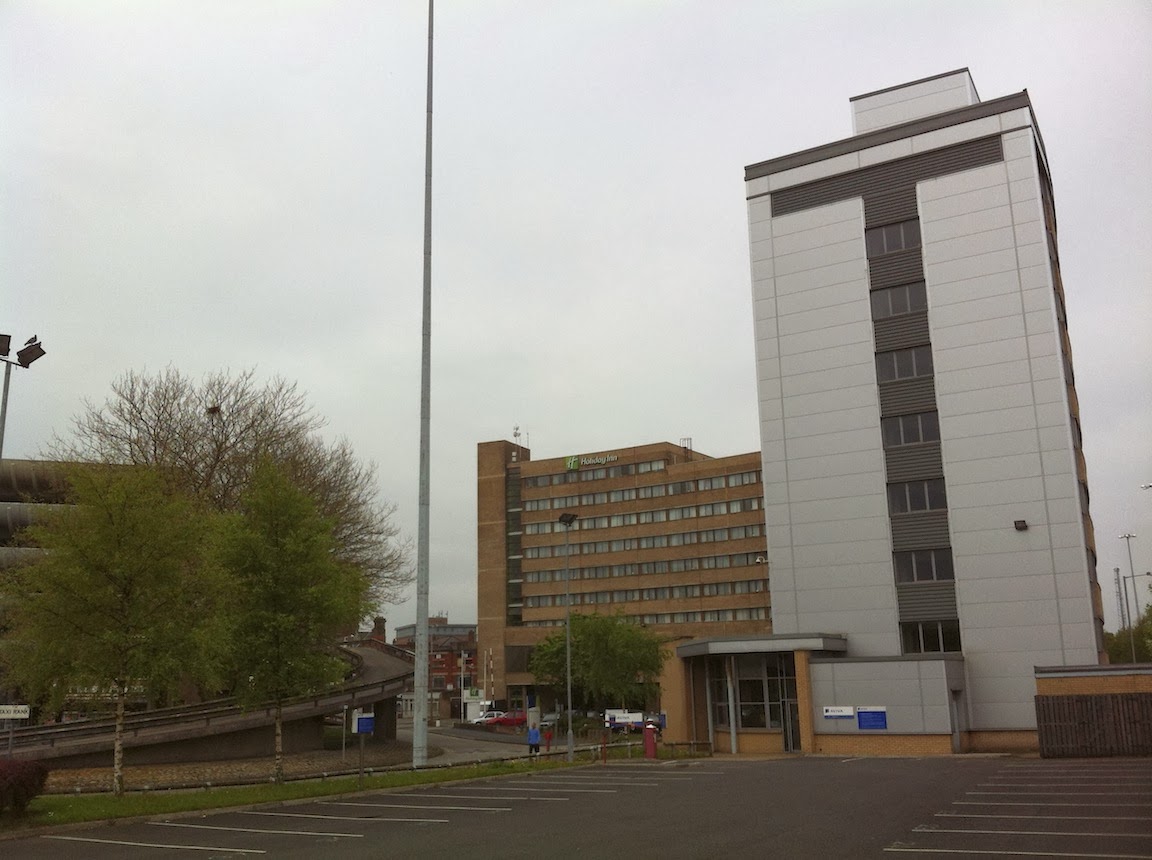 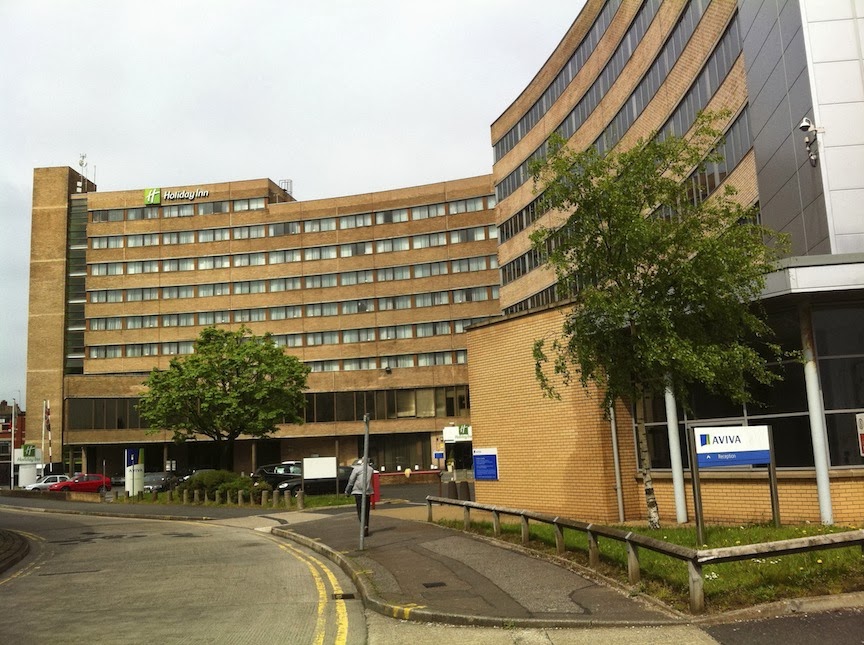 The most proximate building is a truly gawd-awful Holiday Inn, the sort of lodging that causes the very word “hotel” to sink over the years from youthful associations with the adventuresome excitement of travel to the banal drudgery of lonely business trips of adulthood. The Holiday Inn's only acknowledgement of the Bus Station is as a sort of central dent between two wings of rooms, as if the long brutal battery had rammed the sad hotel tower. 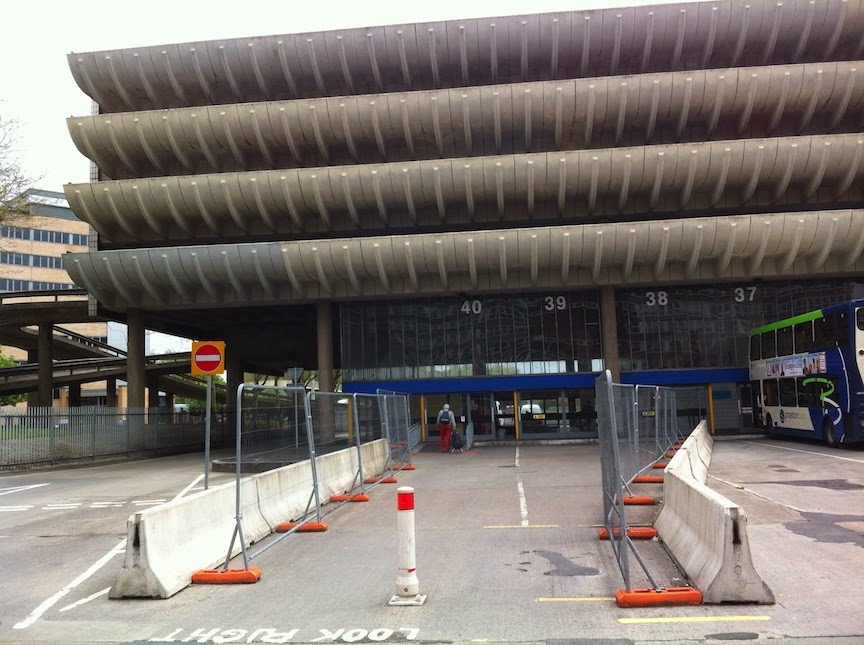 To enter the building itself is a mean task. The above, I kid you not, is the ground-level entrance. At least, as I found it in May 2013. I have no idea if this a temporary condition due to some renovation, as there are bay numbers above the doors suggesting that busses formerly pulled up at this spot. I believe the only other way for pedestrians to access the station is a series of subterranean passageways or overhead bridges. Is there a more terrible space of modern life than an underground pedestrian tunnel to the bus station? 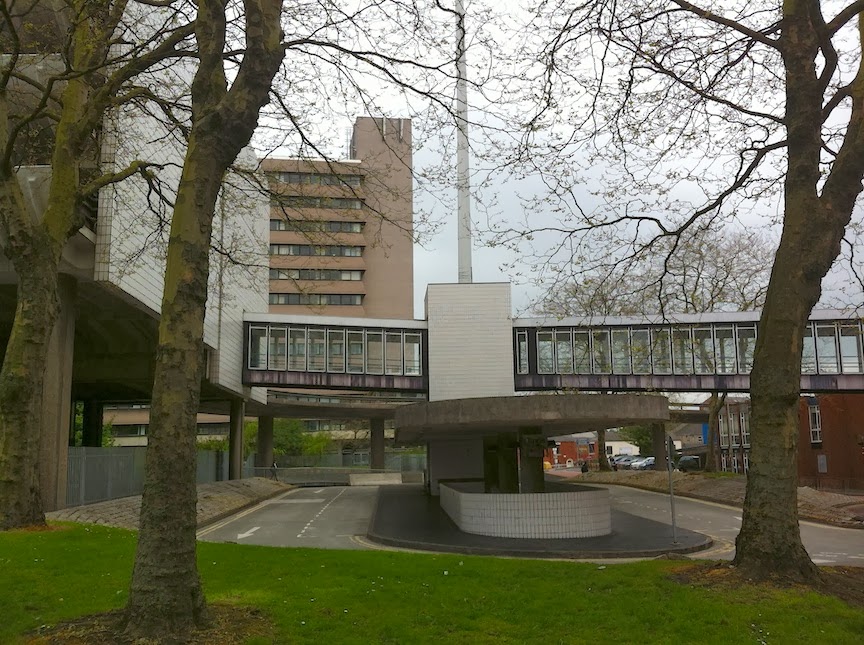 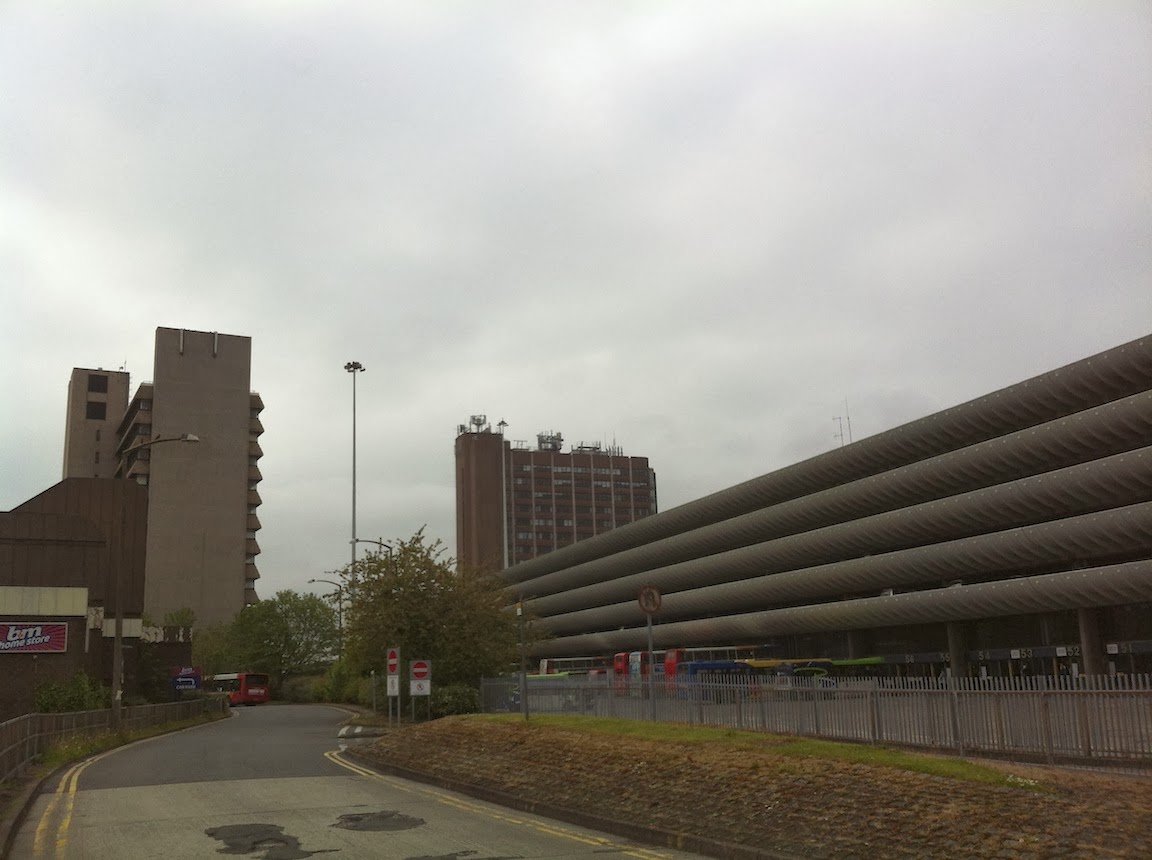 Inside the building was the grand finale of the slowly-increasing awfulness of the whole experience. I'll put aside whether traveling by bus is uplifting in and of itself or not; I only took a few pictures partly because the light was so low and partly because all these sad, creepy people were milling around with nothing to do but stare at me and my camera. 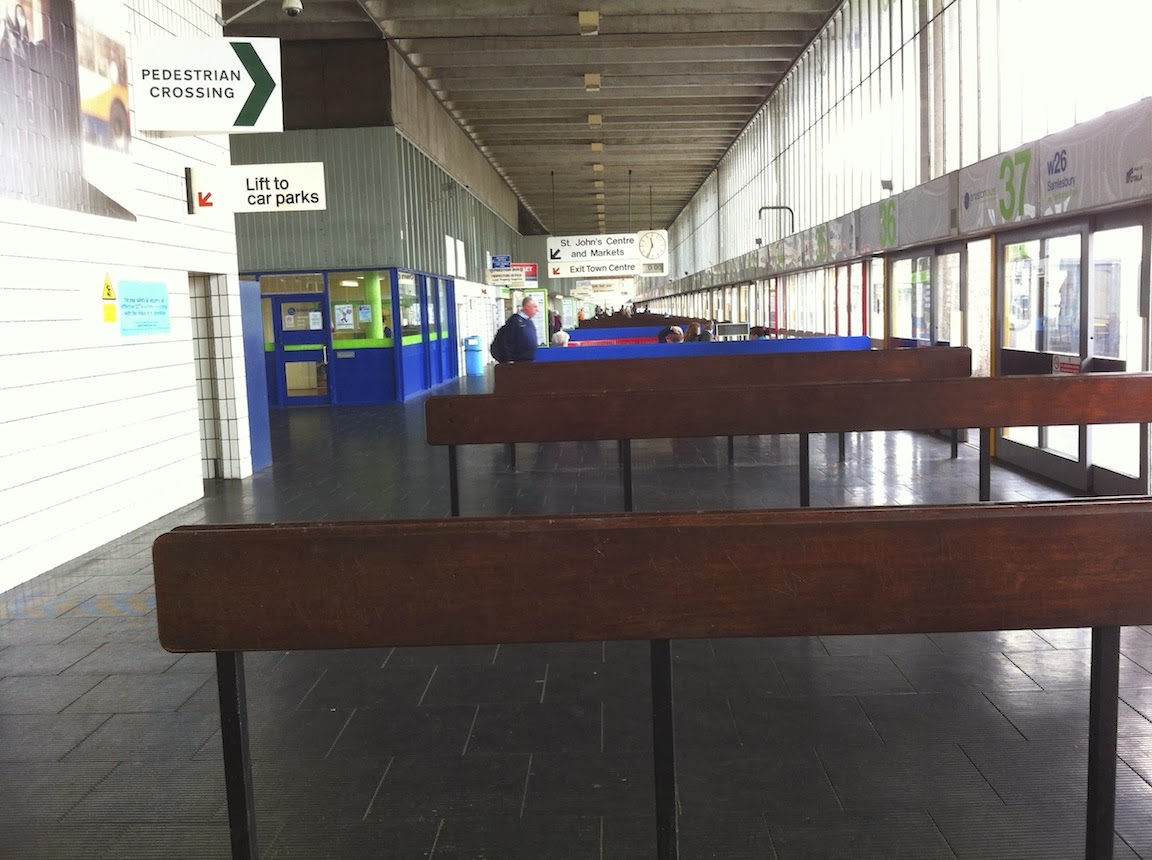 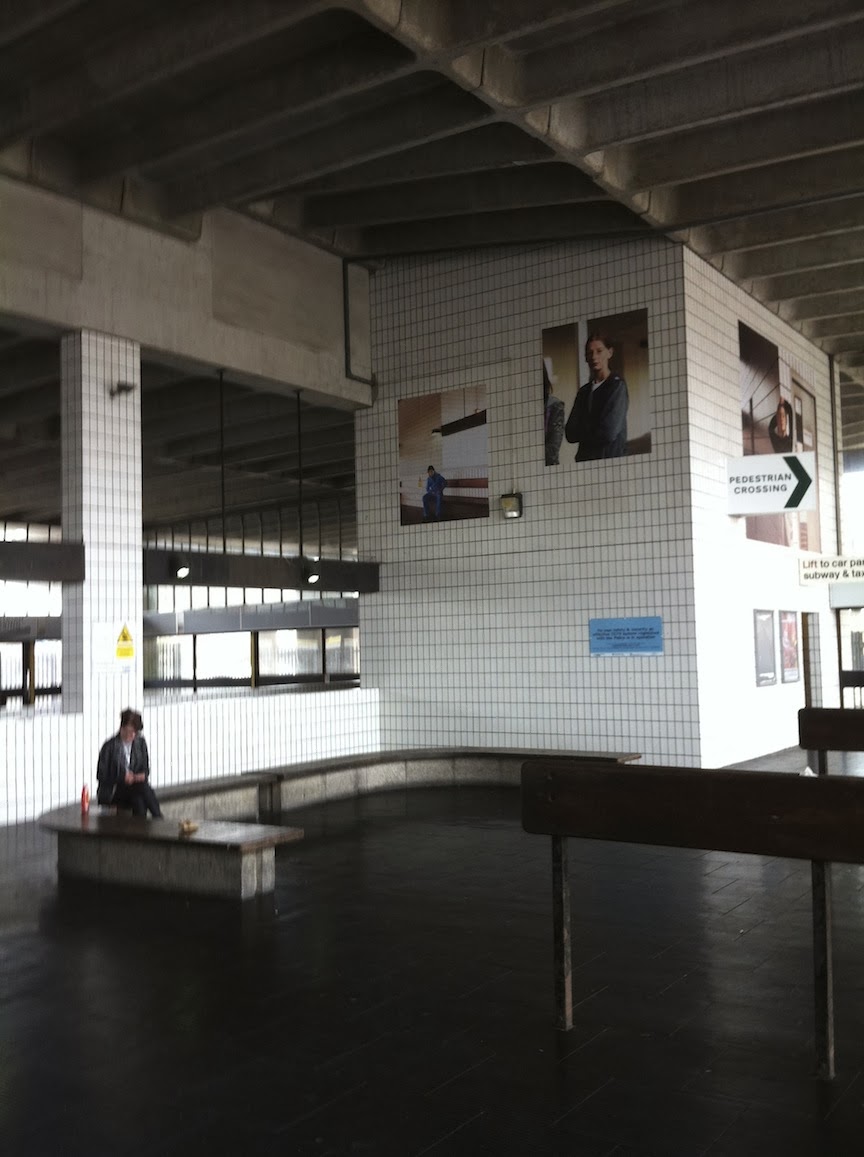 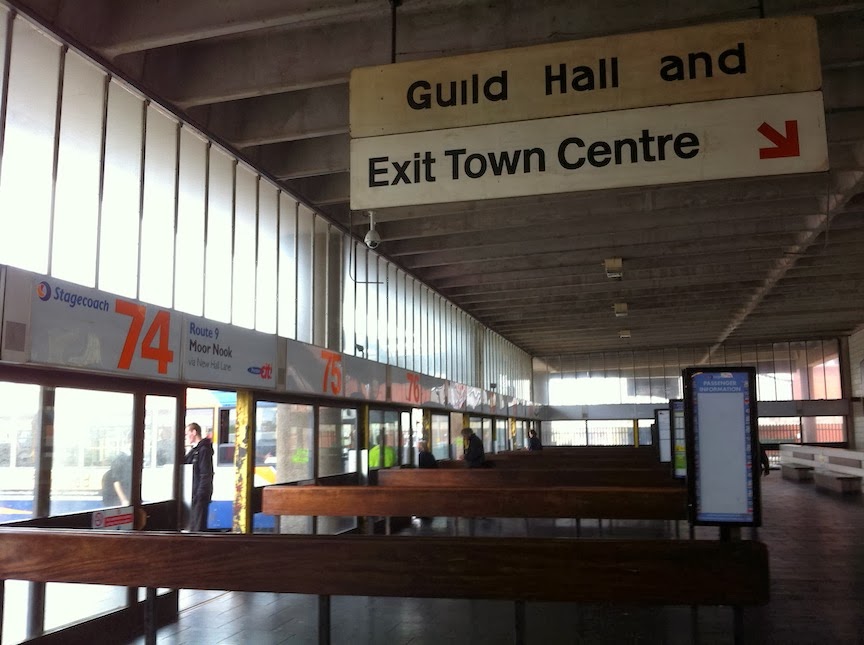 The interior hall is a preservationists dream, both in the sense that civilization has moved on from constructing spaces like this, and also it's hard to see anything that has been touched in decades, from the seating to the signage, the murky glazing to the worn wooden guardrails. The whole contemporary updates were the snacks in the smelly shop and the commercial branding of the private stagecoach companies. 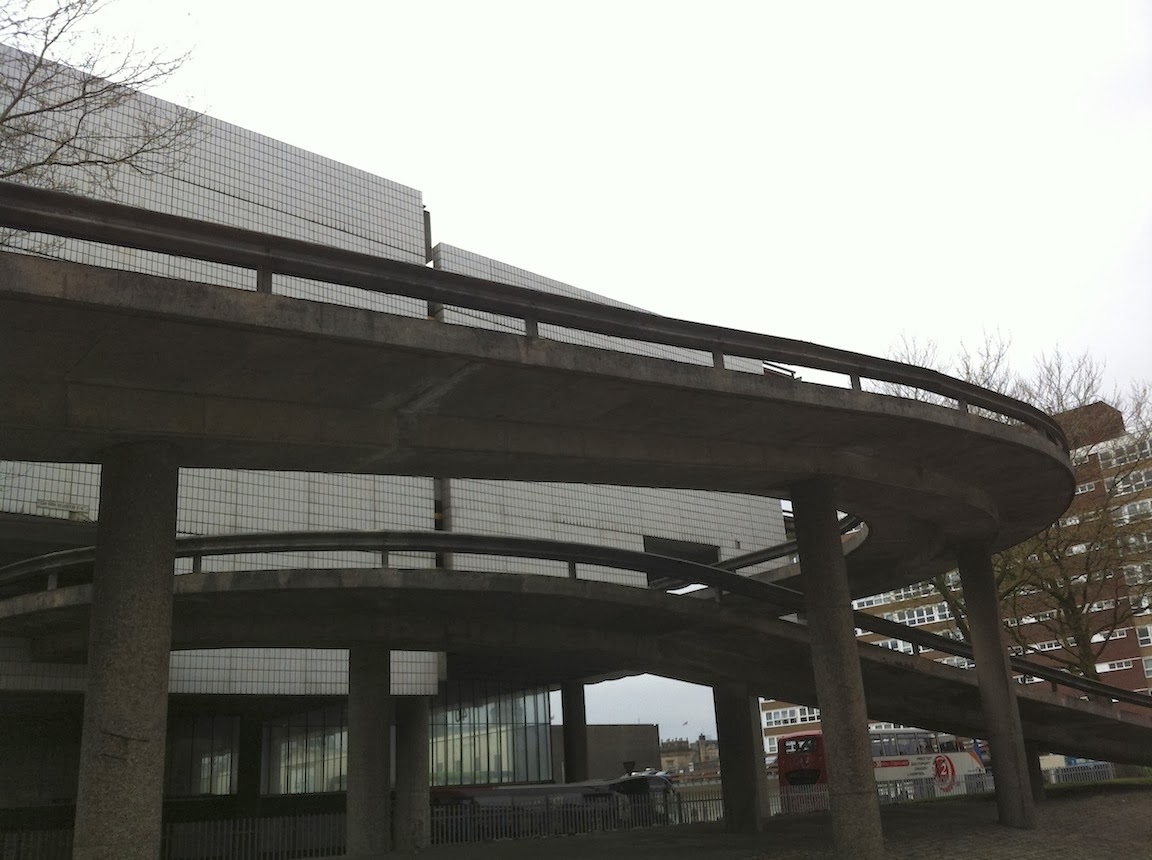 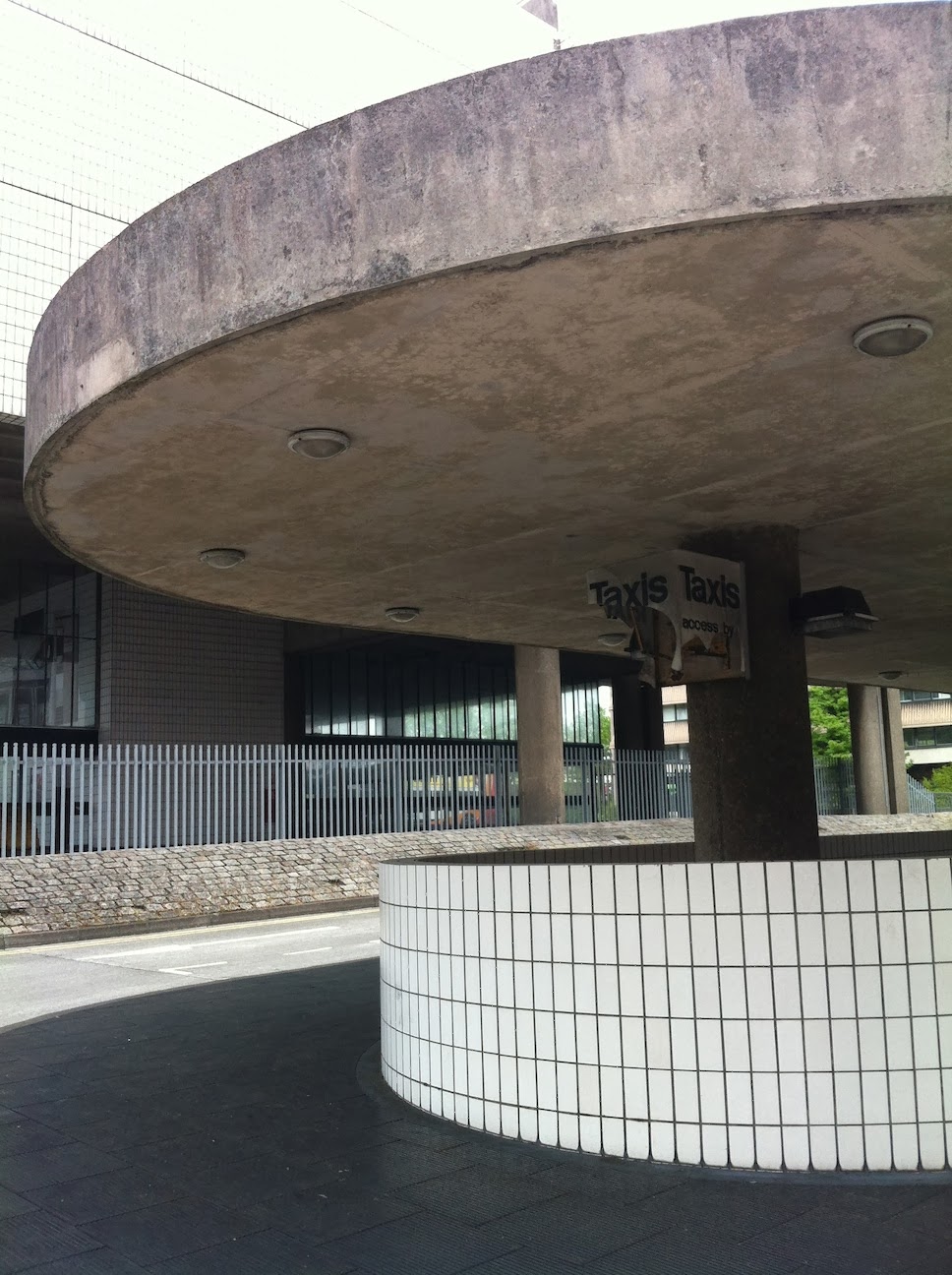 I left the building after walking through once: again, a surface-level crossing in which pedestrians have to mind that busses don't run them over. There wasn't any place immediate to go to; and the collection of strange street furniture, like the nearly art-deco white tiled abandoned taxi circus, and the landscaped berms, and all the fencing, made immediate interaction with the edges of the structure so unnerving. Also, there was nowhere to go outside building, except if you were unlucky enough to be booked at the Holiday Inn. 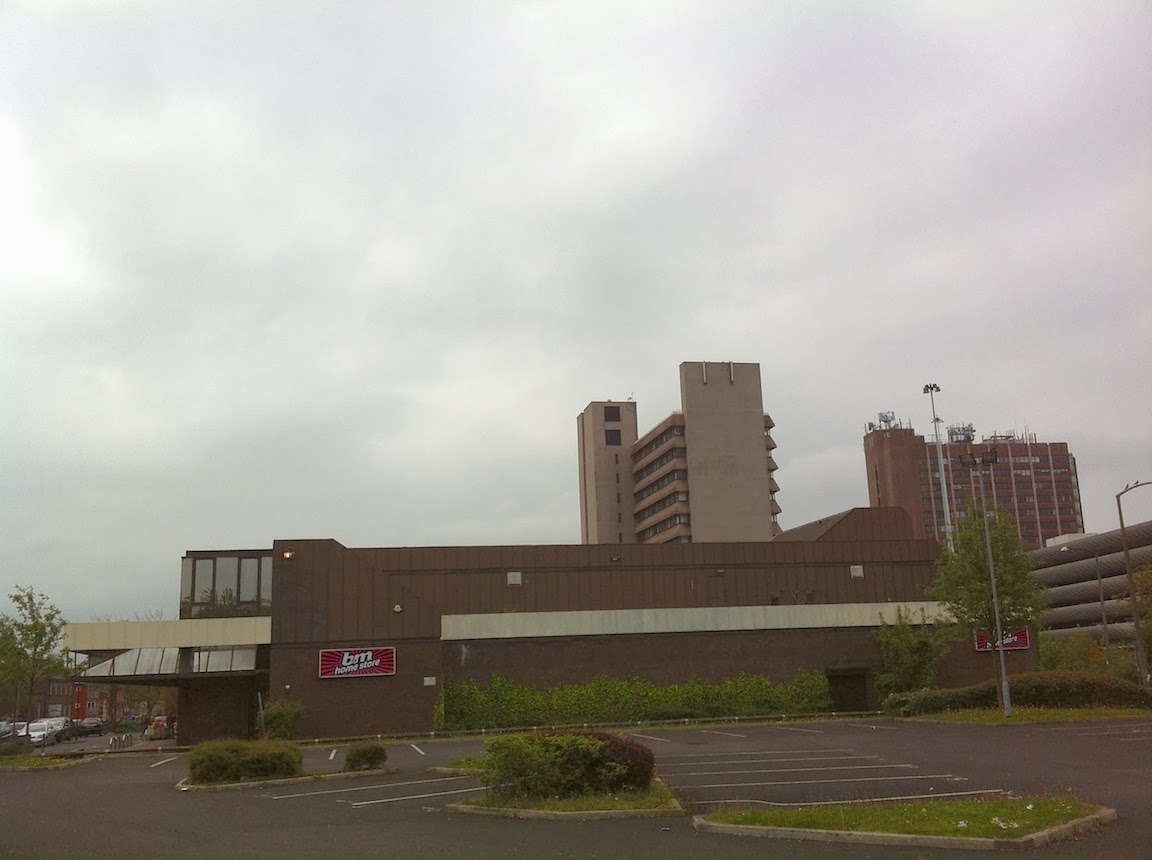 What enthusiasts’ emotions don't encompass, and precisely what the Listing does not address, are these very central and urgent problems of the building: that it is difficult and unpleasant to approach, to be in, to use, and to leave. Secondly, that it is in bad shape, and thirdly that it is surrounded by ugliness. The first fundamental set of issues aren't acknowledged by the pro-preservationists; the last two are cast off as outside the scope of the matter. But precisely because making any positive intervention in the maintenance of the building itself or its immediate setting is outside of the bounds of Listing is precisely what is wrong with Listing. 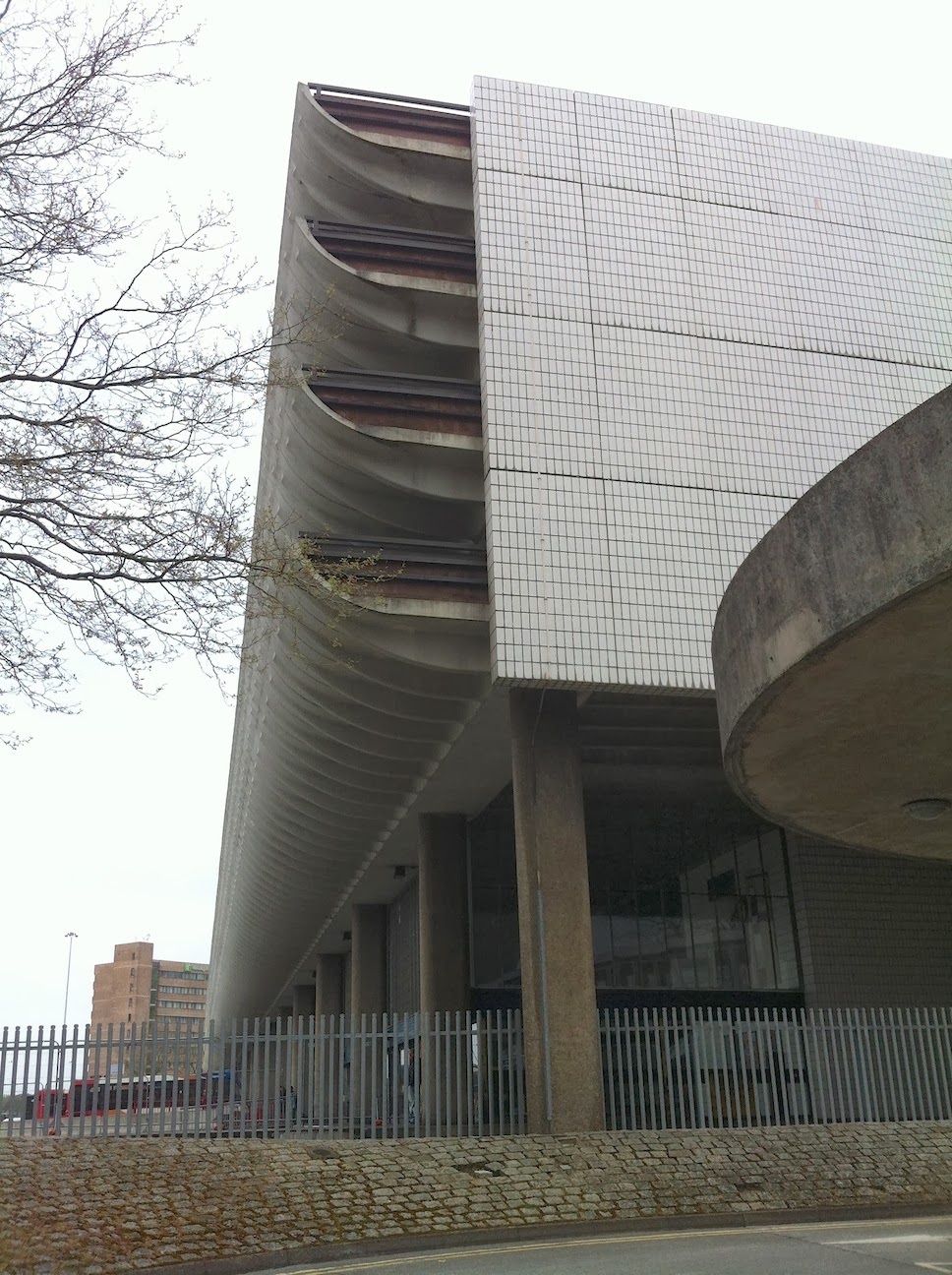 If the building is truly worth preserving, and if that preservation has any value, it should be accompanied by the launch of a campaign to maximally increase the pleasant aspects of itself and its environment. That so many types of Listing in fact do much the opposite, it forbidding interventions, shows how paradoxically unsuitable Listing can be, and why preservation loses so many potential sympathizers, who are baffled that an edict which seeks to restrict local options on spatial changes and which comes with no assistance or resources to make necessary improvements.

The shabby, revolting Preston Bus Station could be an opportunity reinvigorate this megastructure into the glorious Temple to Transport that shines not only from rows of glossy Google jpegs, but at the centerpiece of a beautiful section of a revitalized city. This would prove the naysayers wrong by bringing forth the merits of the building, which if it is indeed a successful work of architecture, should be widely accessible to the general public. Instead, the only message seems to be a baffling and condescending dispatch from the capital: we know better than you.