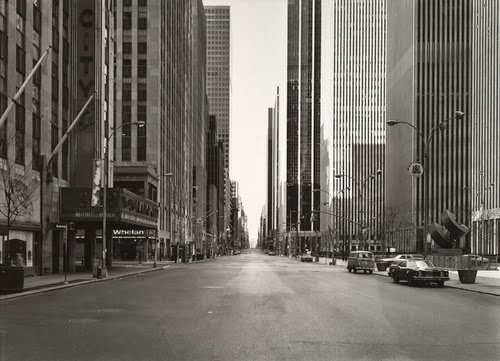 In the last post about Cleveland, I briefly mentioned in passing a unique urban phenomenon, the visual effect of rows of tall buildings arranged along a city street. I've noticed this for years, and mentioning it made me think about its varieties and ways to describe it. While I can't offer an academic analysis here, I'm going to try to briefly explore it a bit further. 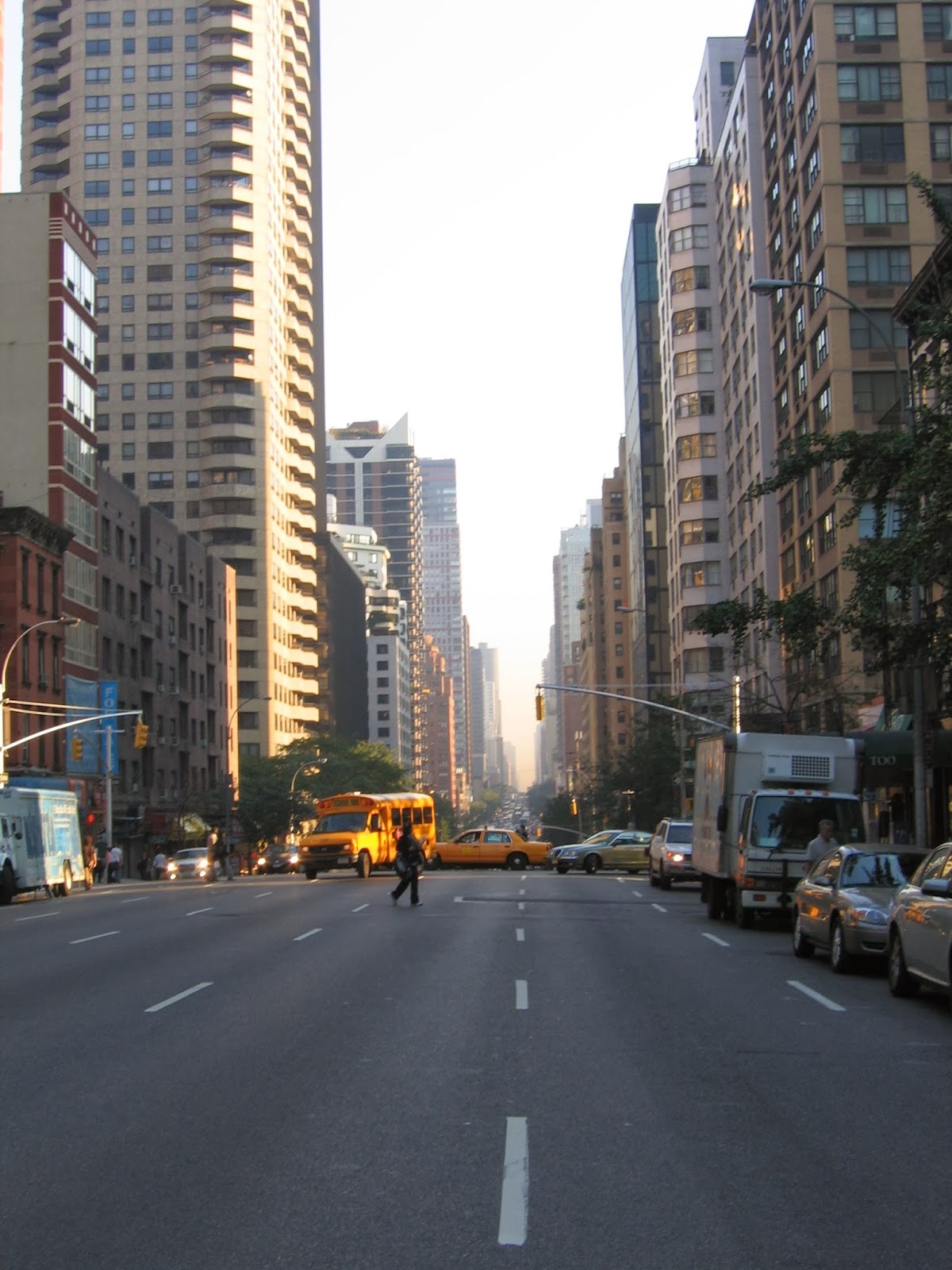 While others may have long since recognized this phenomenon as well, I am not sure if this urban distinction has undergone appellation. It seems to be born out of uniquely American urban conditions: the downtown cores of classic large American cities, where tall buildings are arranged in orthogonal grids, the blocks equally spaced apart, filling up the envelope of each property in a uniform fashion, so that the fronts of each block align. The buildings not necessarily skyscrapers, but are sufficiently tall as to suggest a wall along either side of the street, as a hedge-row on a country lane, interrupted only by cross-streets. The buildings develop a conversational relationship with one another; each block becomes a component of a larger arrangement. 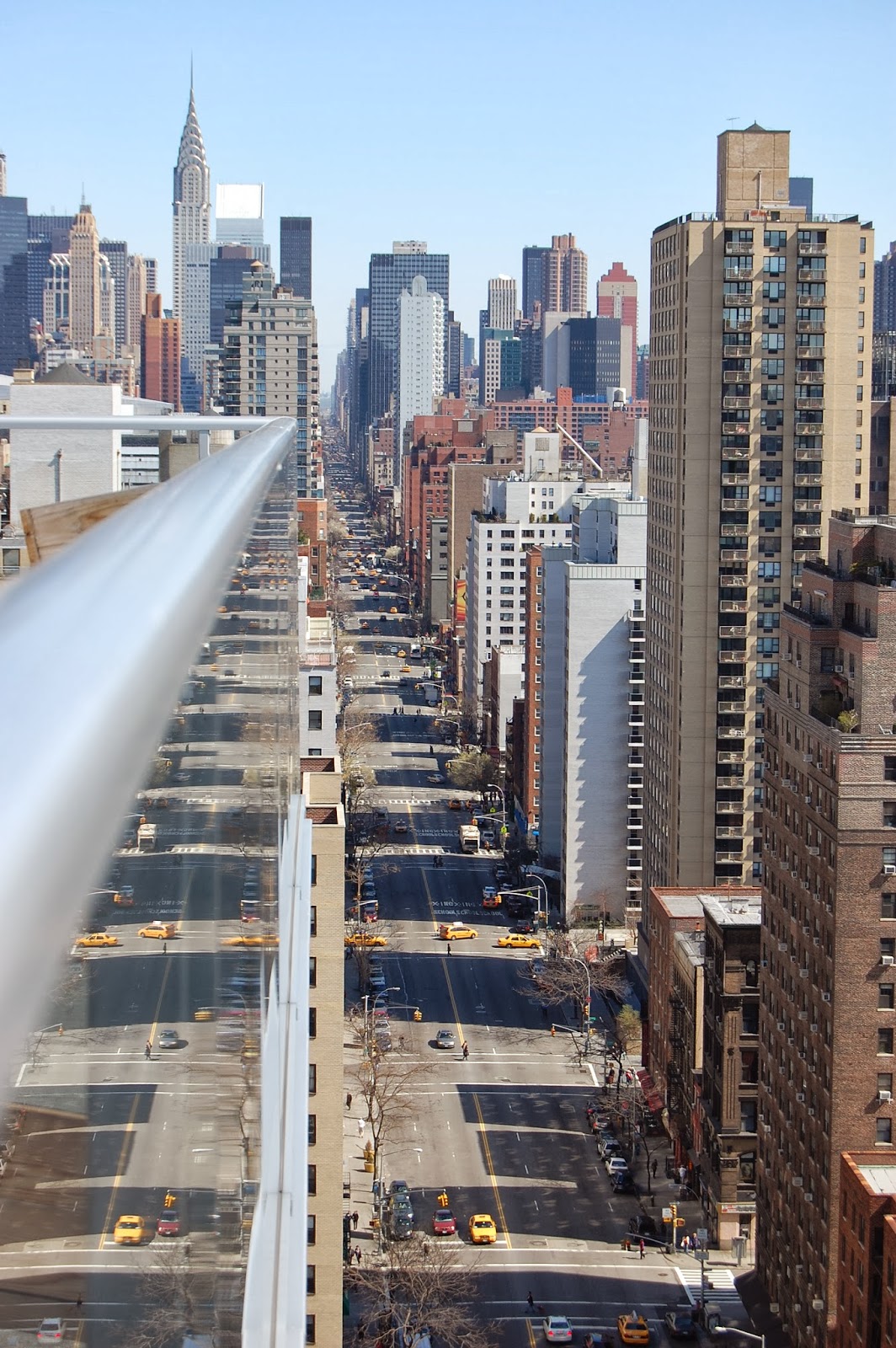 I. Säule and Zeile

Manhattan would be both the most recognized and recorded, but also the largest and most expressive example of this: the island's density stretching along its numbered avenues for six or seven miles in straight lines. It is one of the most quintessential aspects of Manhattan's appearance, although I am not sure it has ever been specifically given a name, although Manhattan's deep density of full-block buildings has been described as canyons of buildings, which partially describes the phenomenon. 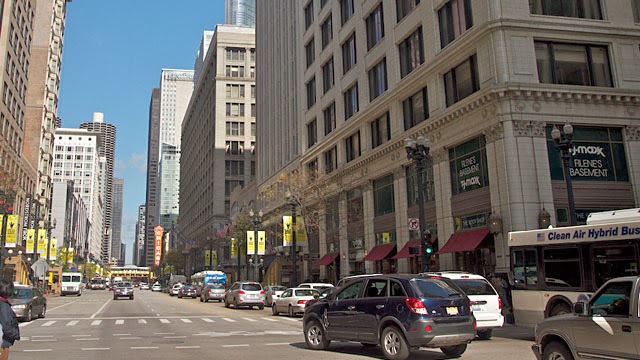 But it is not limited to New York. Chicago’s Loop expresses this aspect as well, although Chicago's central business district, while quite large, is much smaller and less elongated than Manhattan. The Loop has a clear limit, giving way to warehouse districts and residential areas, whereas Manhattan's avenues vanish, and its cross-streets disappear into the waterfront. Visually, constructed canyons seem carved in each cardinal coordinate.

There are many other examples; as the effect momentarily occurs one street in a small downtown like Cleveland, there are probably countless individual examples in dozens of American cities with a sufficient building stock and suitably wide, straight streets, built up with adequately tall buildings—Washington and Paris are too low to the street to have the affect appear. 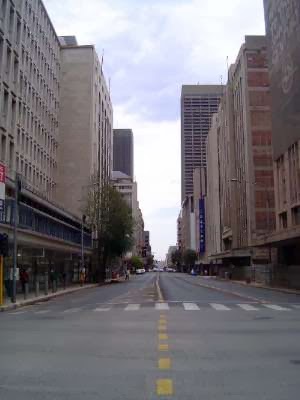 A near-appearance of the phenomenon on Commissioner's Street in Johannesburg.

It would be possible to capture this atmosphere in large, grid-array downtowns in Vancouver or Houston, and perhaps Sydney or Melbourne—any place where a forest of skyscrapers is arranged across a rigid orthogonal street pattern, from Beijing to Buenos Aires. Maybe not so much London, Paris, Hong Kong or Kuala Lumpur, but here and there in Johannesburg, perhaps the Ginza ward of Tokyo. 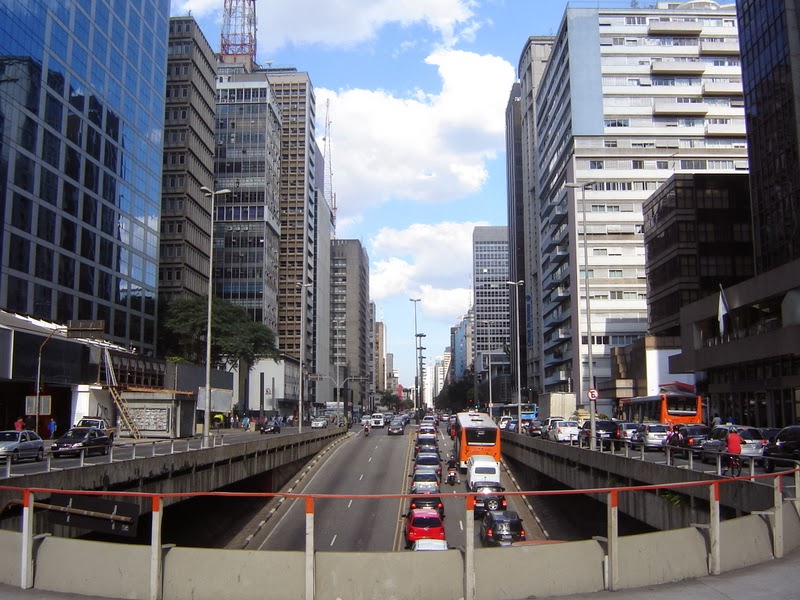 São Paulo expresses it at least on the mammoth Avenida Paulista, if not elsewhere in its vast forest of high-rise buildings, although the city does not have strict grid system. An interesting detail of Avenida Paulista is the pyramidal Edificio FIESP, photogenic for breaking up the slab-wall affect the regularly-intervaled façades. 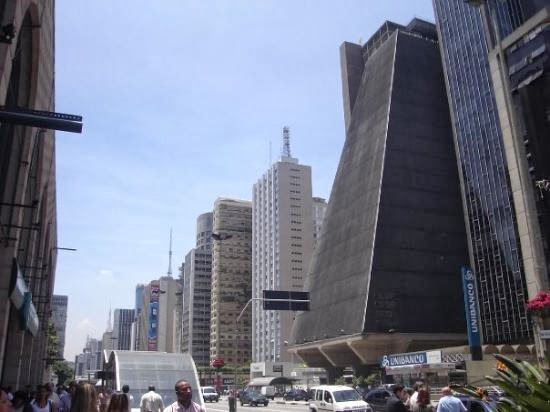 Photo of Avenida Paulista and the FIESP Building, by Panoramio user Rmartinipoa.

Downtown San Francisco's financial district somewhat weakly presents this phenomenon, with the added effect of the canyon floor sweeping up the steep hillsides at the far end of each street, or looking out towards the Bay, aligning with the span of the Bay Bridge. 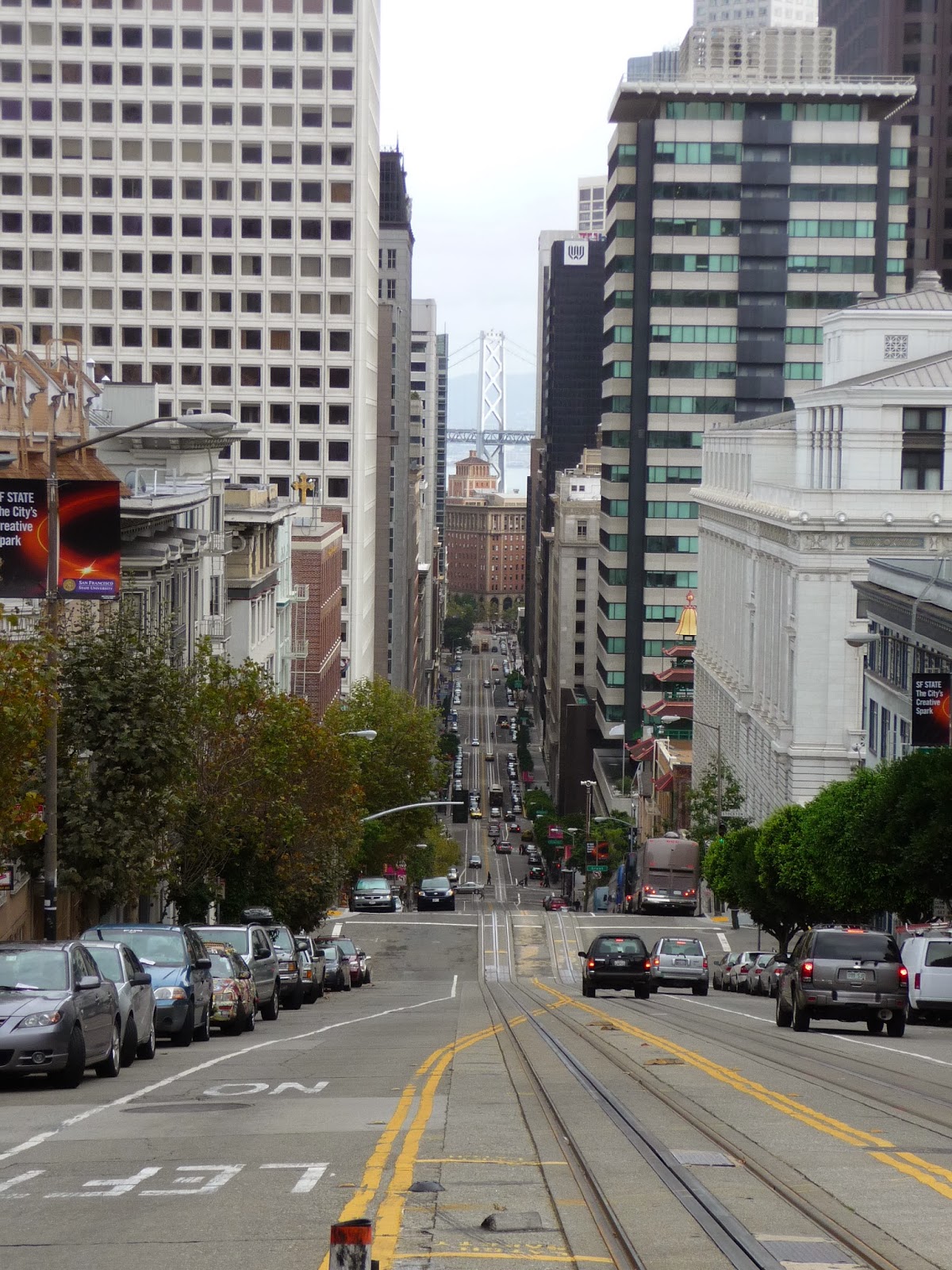 The Streets of San Francisco.

More linear than the mile-long boulevards of Manhattan are places where dense clusters of high-value real estate are divided into roughly equal sites, but the conditions only yield a single row of high-rise buildings. This is a typically littoral condition: it recalls the heavily urbanized coast of Southern Florida, for example, and other locations where high-rise towers, mostly residential or hotels, march along a main street that follows the coastline, like Cancún. However, in the case of typically-curvacious resort-style architecture, there is not enough alignment for the full effect to register. 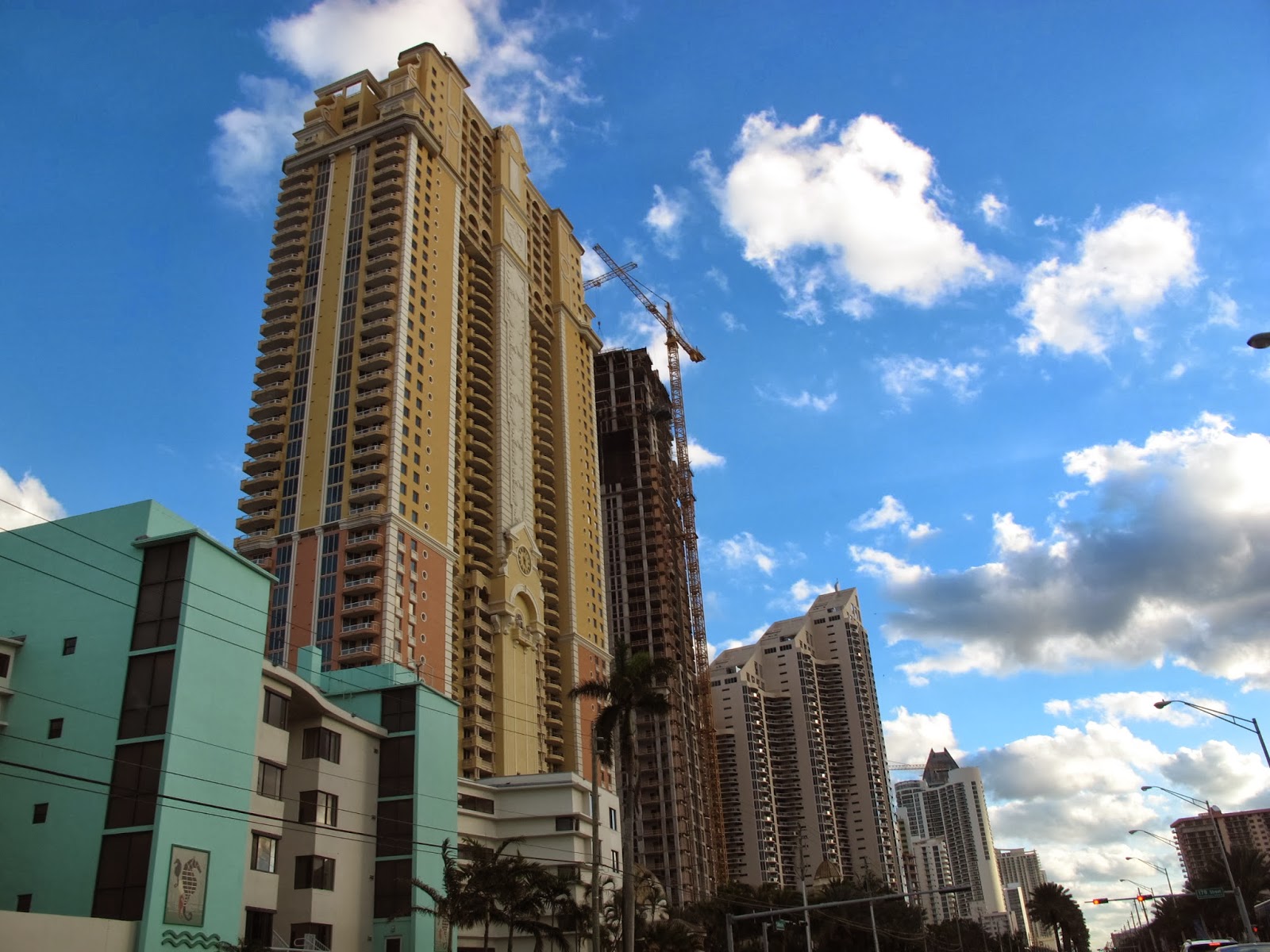 The most distinct difference between this linear row and that of an American downtown is that the arrangement is only one block wide on either side. While not necessarily evident from a straight-on perspective down this one street, the edges of vision, and the visual understanding of the wider urban area, imply that the density discontinues after only one row of buildings. 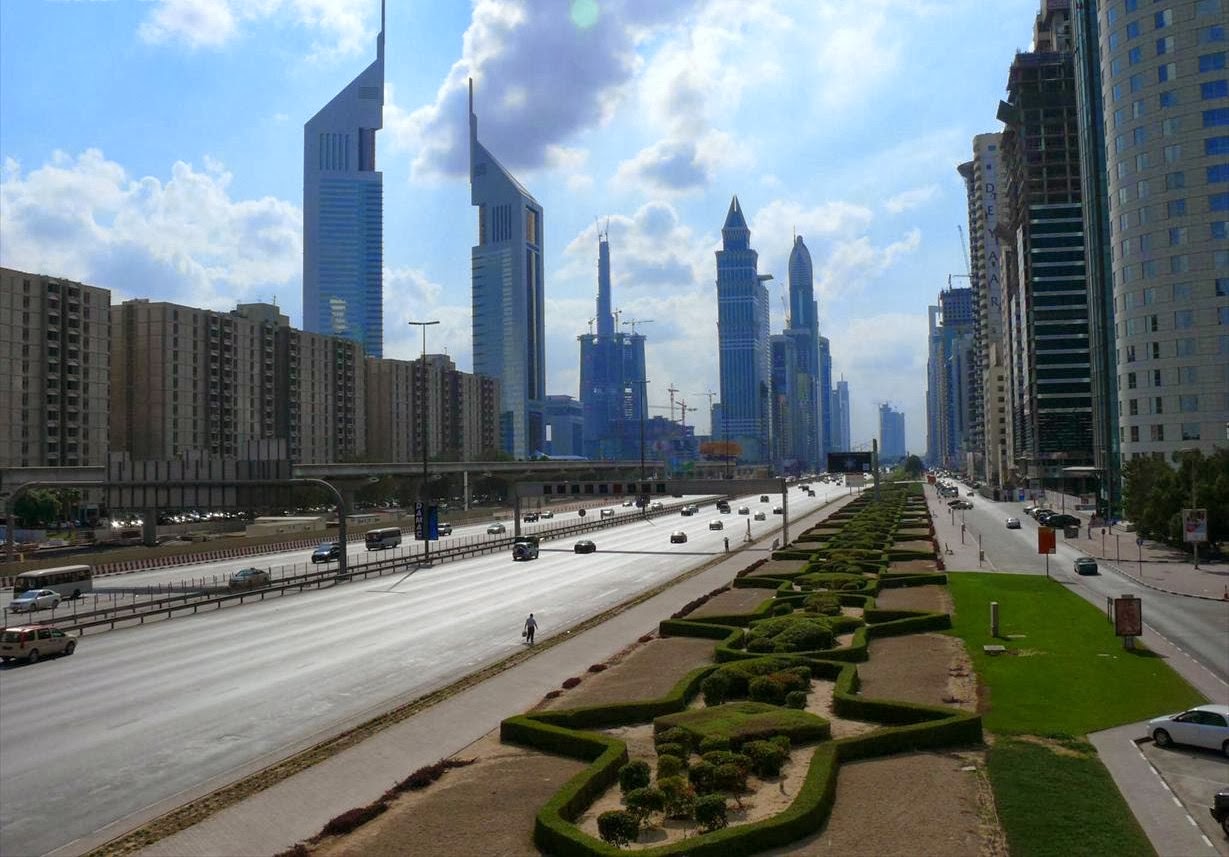 The best example of this that I know of is Sheikh Zayed Road in Dubai, which is both long, wide, and evenly spaced with high rises, some extremely tall, columns on either side. Although Dubai is a littoral city, Sheikh Zayed Road itself is away from the beachfront, and the single rows of skyscrapers stand with low-rise buildings behind, or nothing but dry lots of open desert. Dubai's mid-town does not spread across a gridded district of regular built density, but stretches on either side of a single major street. 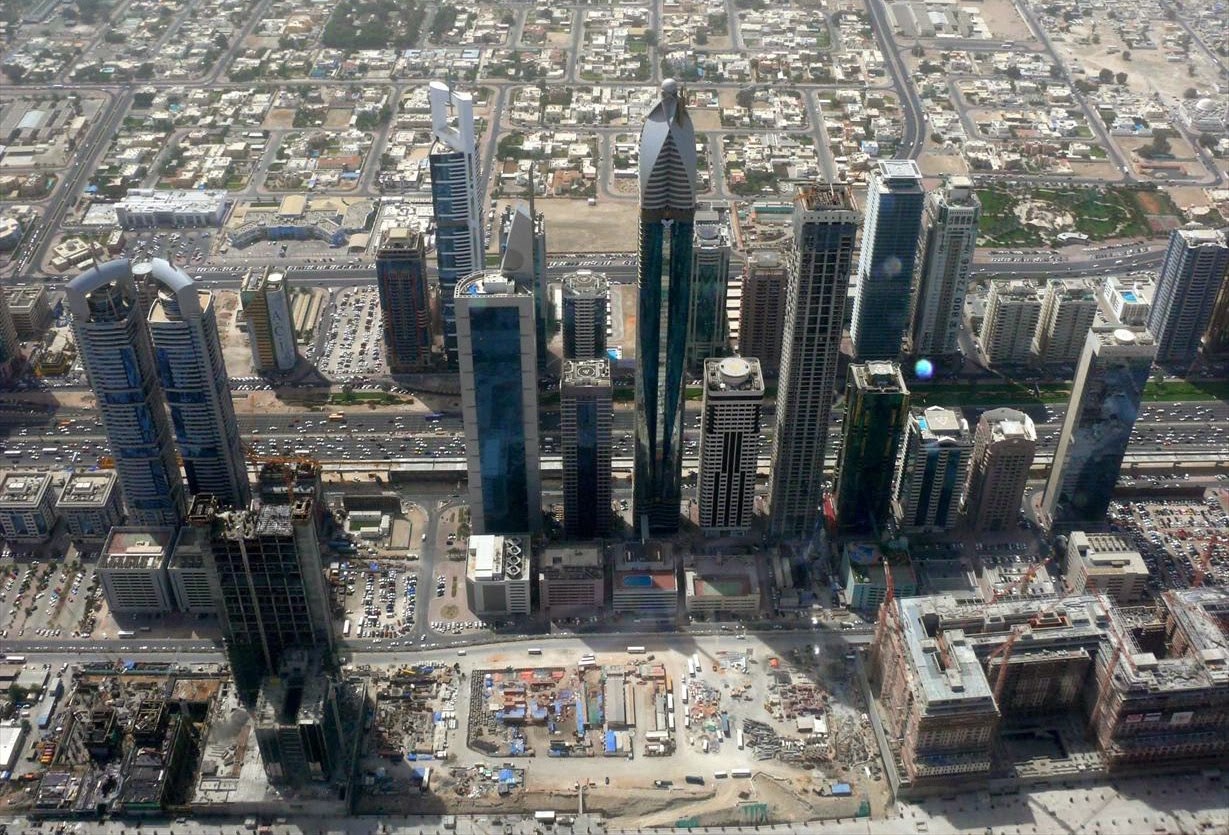 Images of Sheikh Zayed Road in Dubai from Wikipedia and FlashyDubai.com.

Related to the narrow hedge-row effect of Sheikh Zayed Road, a third variety of this phenomenon emphasizes the appearance of tall buildings fronting a significant thoroughfare in an otherwise low-rise environment, often in the case where a major street connects multiple centers of a sprawling metropolis. While the façade-wall effect is visible along the prospect itself, it is no longer set out along a grid of blocks. The hedge-row effect is more clearly understood from above, where the contrast in height is more evident. 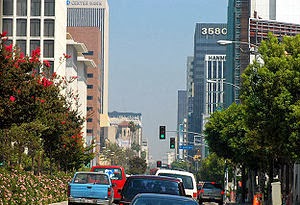 The two large examples that come to mind are Wilshire Boulevard in Los Angeles and Yonge Street in Toronto. 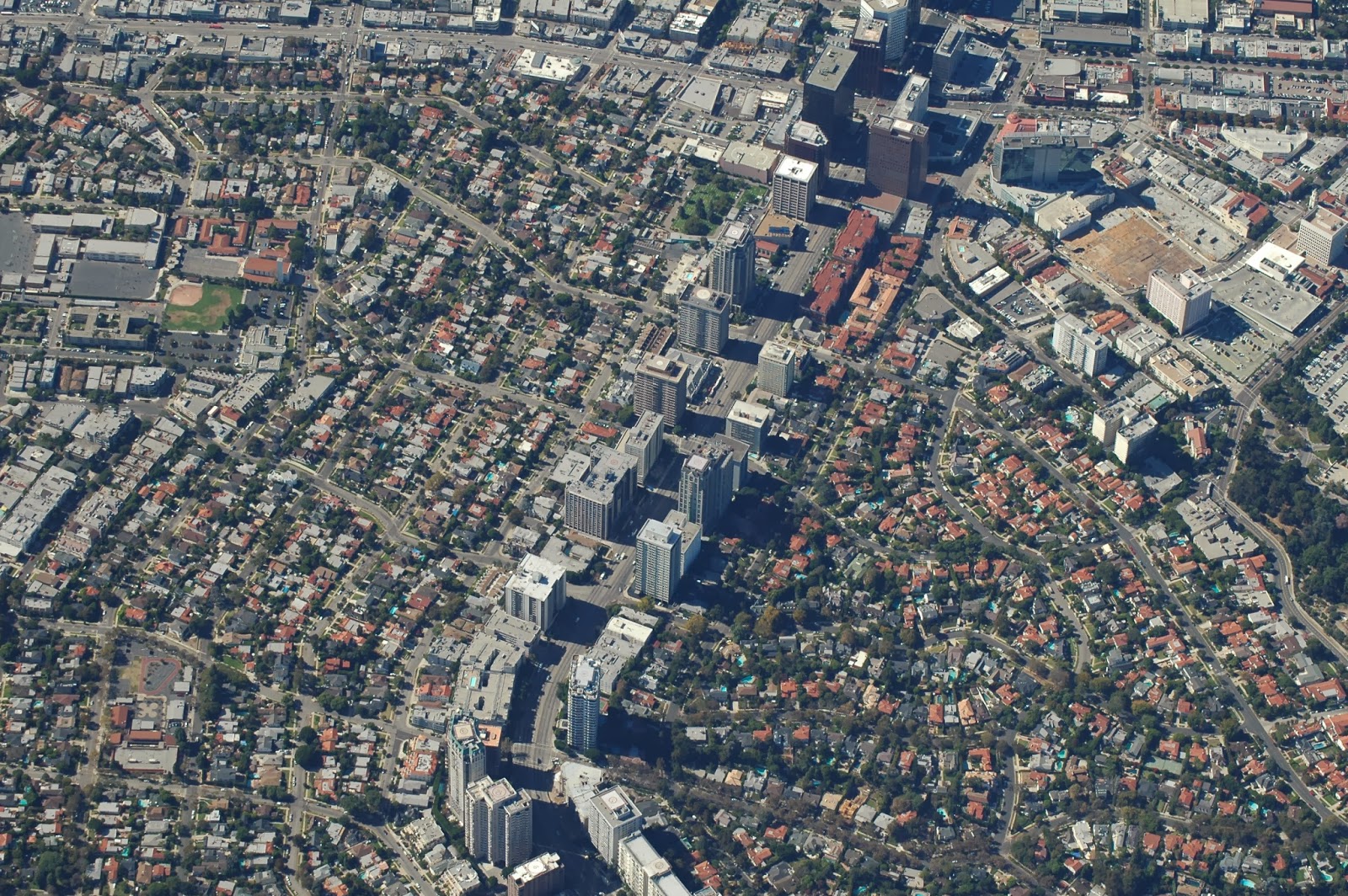 If sprawling Los Angeles has a Broadway, it is Wilshire, which curves at several points along the low foothills as it stretches more than a dozen miles, from downtown Los Angeles through affluent West L.A. towards the Pacific Ocean, terminating in Santa Monica. L.A. is perhaps too famous for it’s sprawl, when it really a city of average density, and Wilshire provides one of it’s most distinct urban moments.

Whether by accident of real estate value or determined more didactically by zoning, either side of this thoroughfare is lined with mostly rectangular office blocks, passing through various clusters and campuses of high-rises at downtown LA and Century City, but otherwise distinct from the low-rise and often residential neighborhoods beyond the rows of columns. As with Sheikh Zayed Road, the contrast is most distinct from the air. 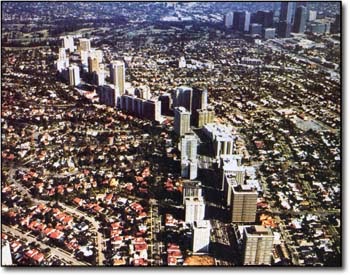 Yonge Street is supposedly the longest street in the world, but that's alway struck me as a rather technical description for the world street, as opposed to calling something a road, or a route, which can stretch from one side of a country to another. These are frequently lined with a high density and sufficient volume of bland boxes, which are forgettable alone orchestrate a remarkable visual affect. 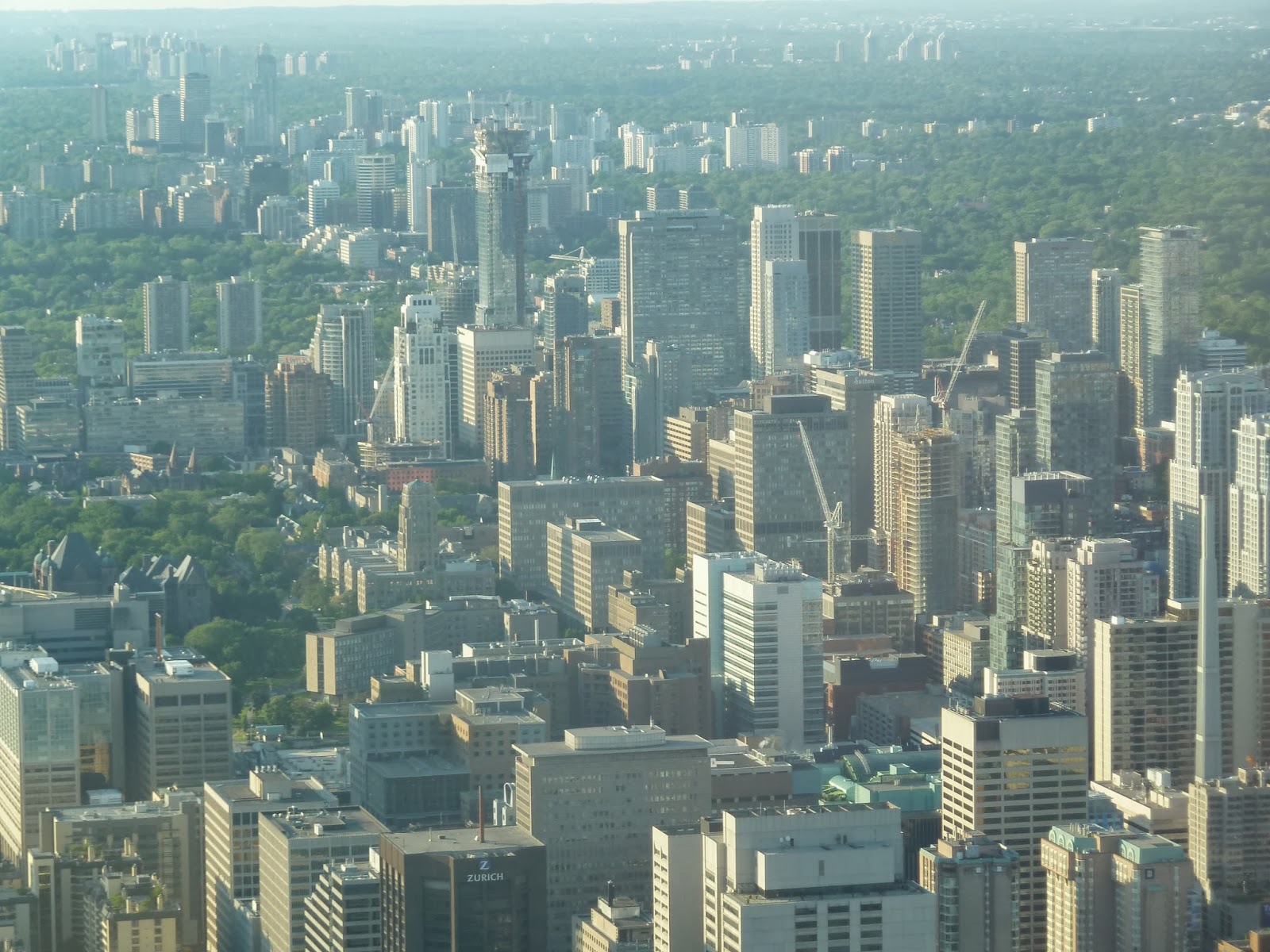 However, the claim to the title is augmented by the extraordinary phenomenon of Yonge Stretching from the financial district of downtown Toronto for miles to the north. Like Wilshire, Yonge passes through and connects perpendicular clusters of mid-rise buildings where it crosses first Bloor Street and St. Clair, all the way to North York, a suburban district nearly ten miles from the lakefront. The astonishing Vancouverization of Toronto, which has accelerated with the real estate boom in the last ten years, is occurring mostly near the waterfront areas of downtown but is also thickening the effect of this corridor of high-rises, stretching to a length of any of Manhattan's avenues. It is quite convenient to observe this effect without having to board an airplane, as the observation deck of the CN Tower provides an excellent vantage point. 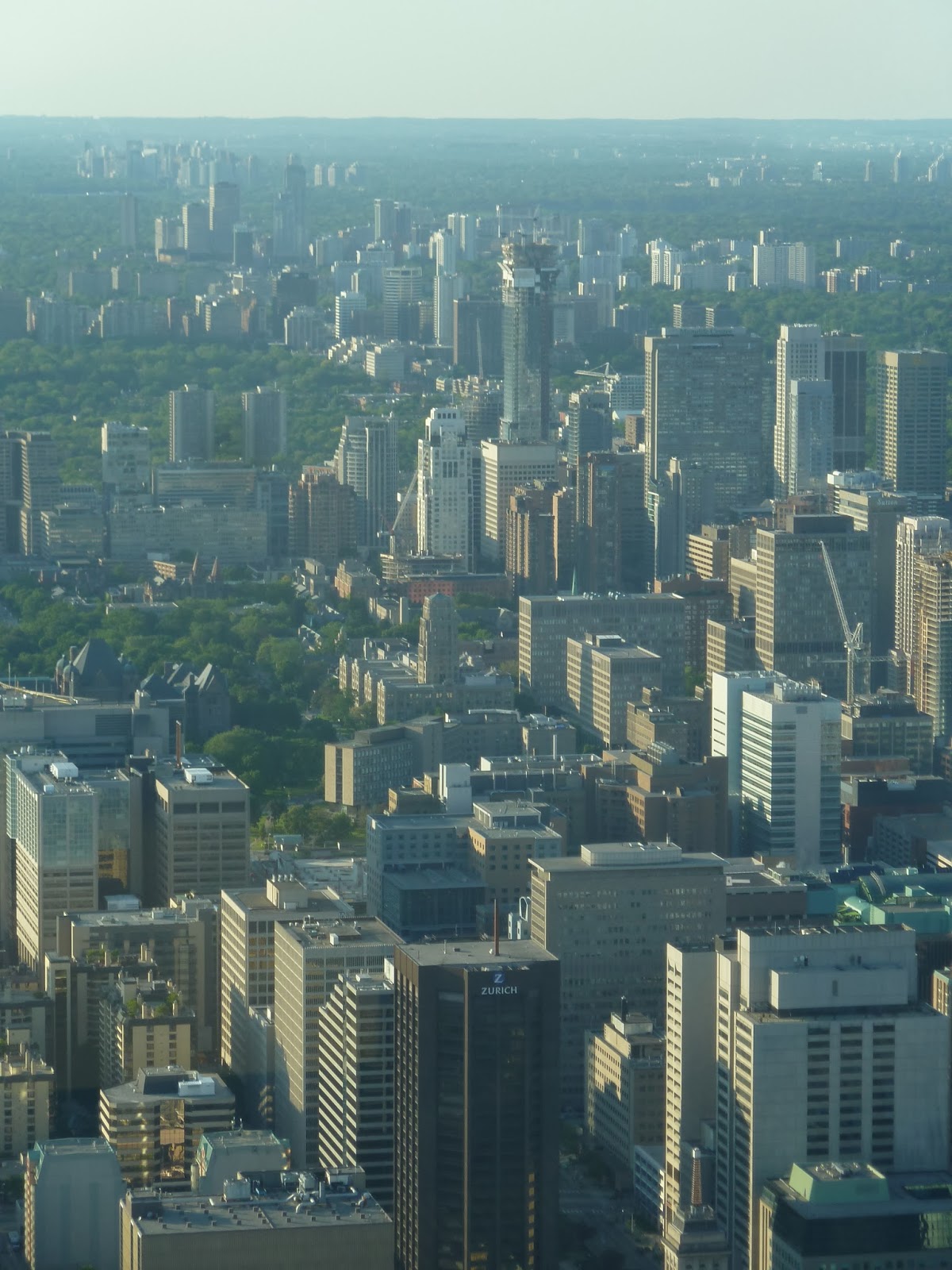