I spent the first part of this year in Miami, Florida: an interesting city in a lot of ways, mainly the way it is both a national and global capital of leisure, and the manners in which this is embodied and acted out, and also the ways in which the city is trying to evolve into a more multi-faceted crossroads; a "real" city with "serious" culture, or at least, an alternative to partying, shopping, eating, and lying on the beach, even as its febrile status as a cosmopolis of wealth and pleasure in this new Gilded Age makes those activities more prominent and overpowering.

One of the most obvious manifestations of its current circumstances is the explosion of luxury real estate, especially high-rise condominium towers. While these glistening new complexes clutter up the oceanfront, most of them sit in close proximity to a previous city: Miami has long been a disheveled, poor city, and the stunning development is in many cases only one-block deep: there is the beach, the luxury high-rise then across the street are tenements, or crumbling art deco shells, or other abandoned buildings. 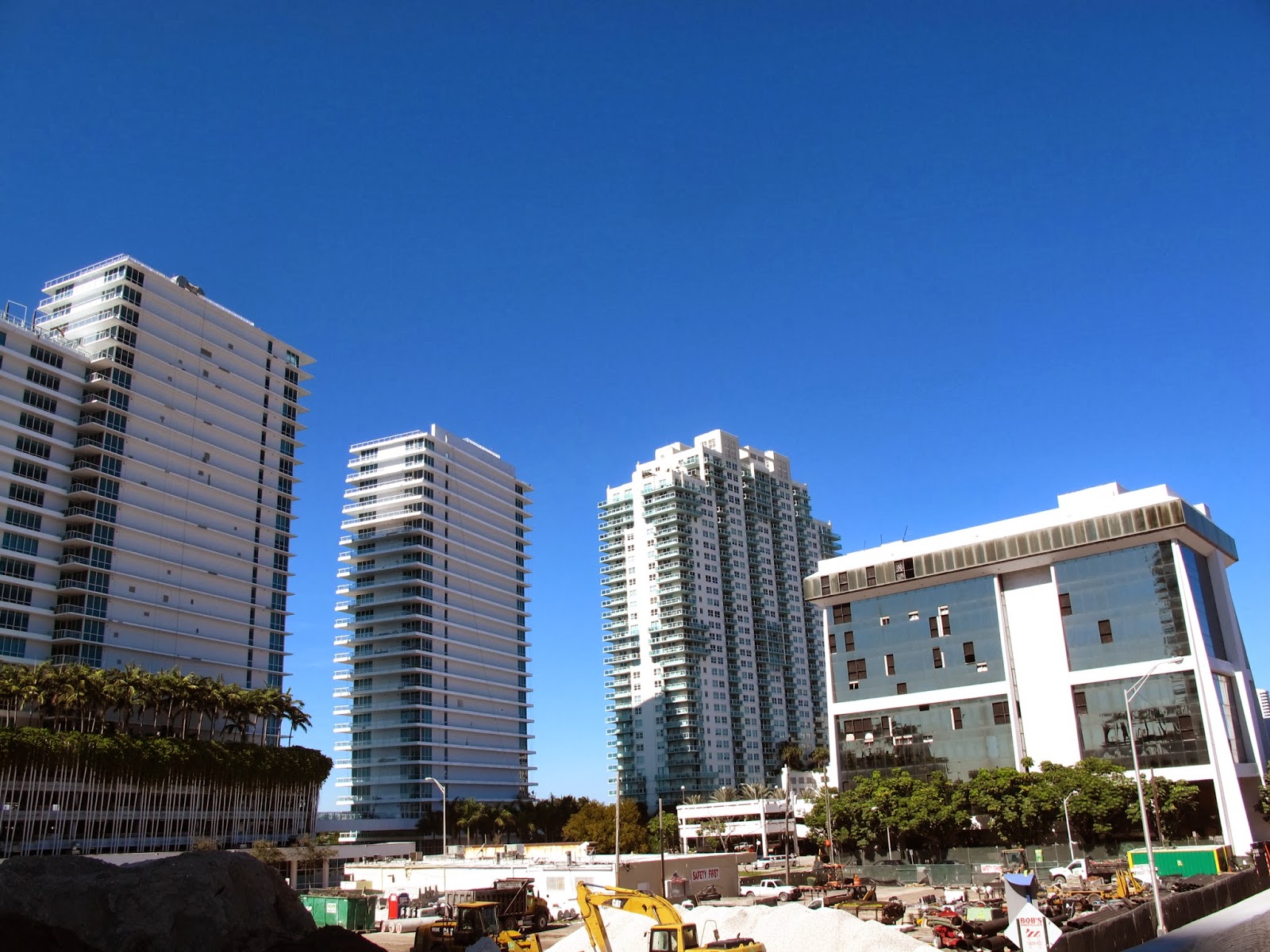 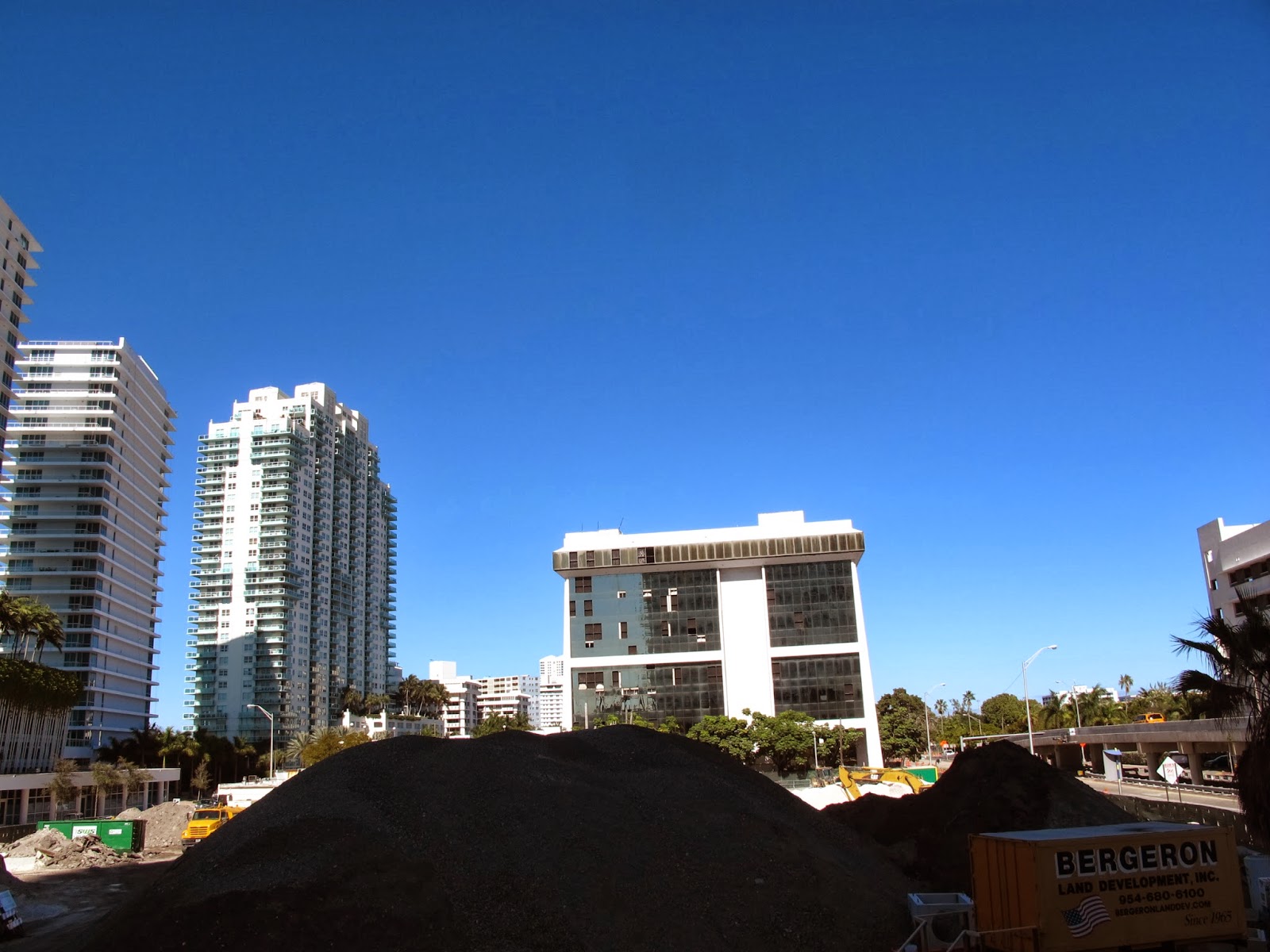 I spent my time in Miami staying at a friend's apartment in Miami Beach. The 15th -floor apartment was high up in one of the recent condominium towers from the pre-crash boom. Although only completed in 2007, the property is already a little worse for wear, but it had wide balconies which wrapped around three sides of the tower, offering views in almost every direction. 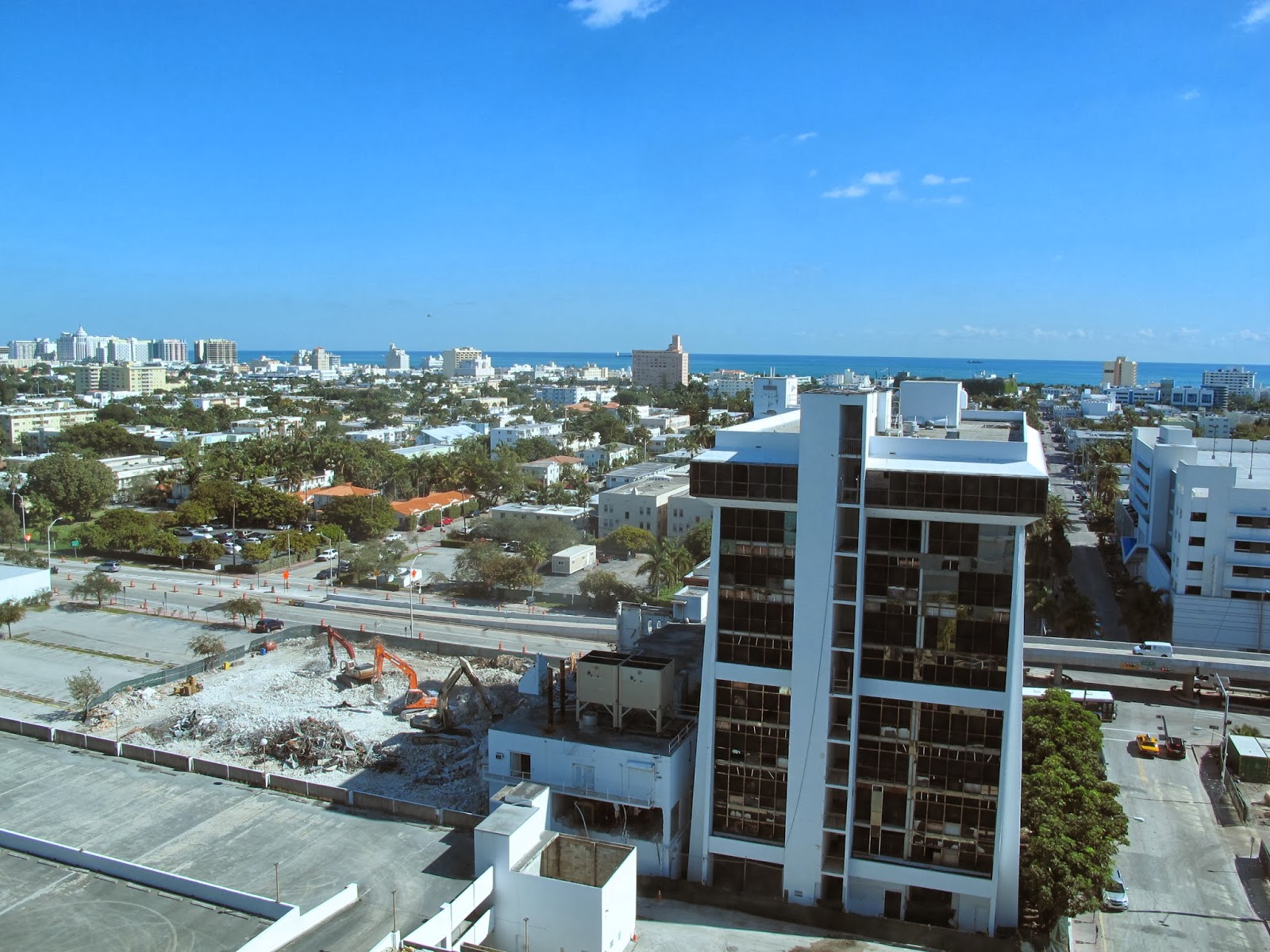 Directly cross the street from these condo towers sits the incredible ruin of the South Beach Community Hospital. I became somewhat obsessed with this site, in part because I passed it every time I came and went from the apartment I was staying in, and when I did pass it, there was often a flurry of activity as the outbuildings were being demolished with yellow machines. But mostly, the old hospital was such an arresting sight: buildings aren't built in this shape and form any more, and this one stood vacant, many of its shiny golden windows blown out, possibly from vandalism and demolition but also, I think, due to a hurricane from several years ago. 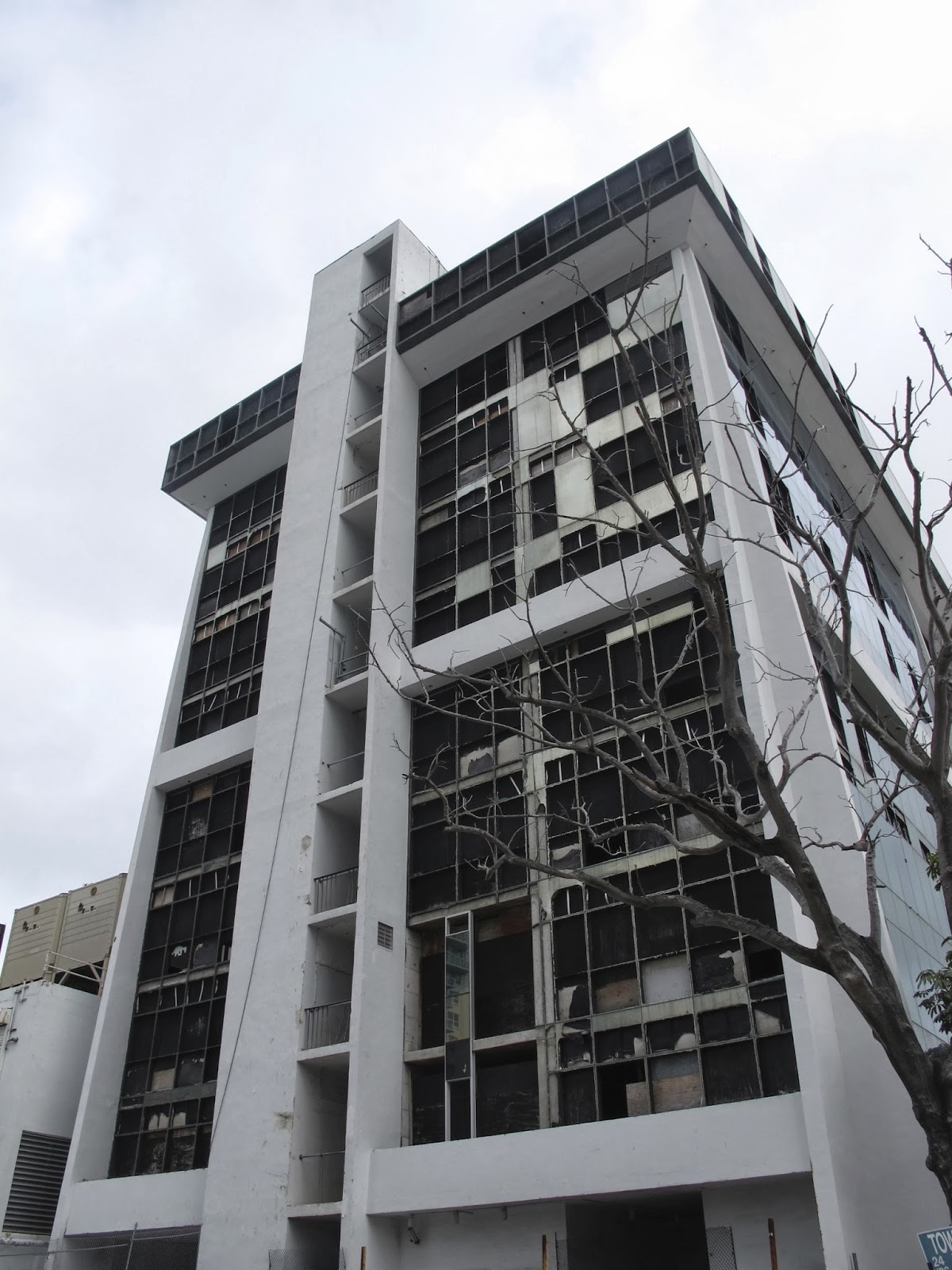 I am a big fan of the now-discarded penchant for forming a wide-browed capital atop office buildings like this, a practice which has fallen out of fashion. 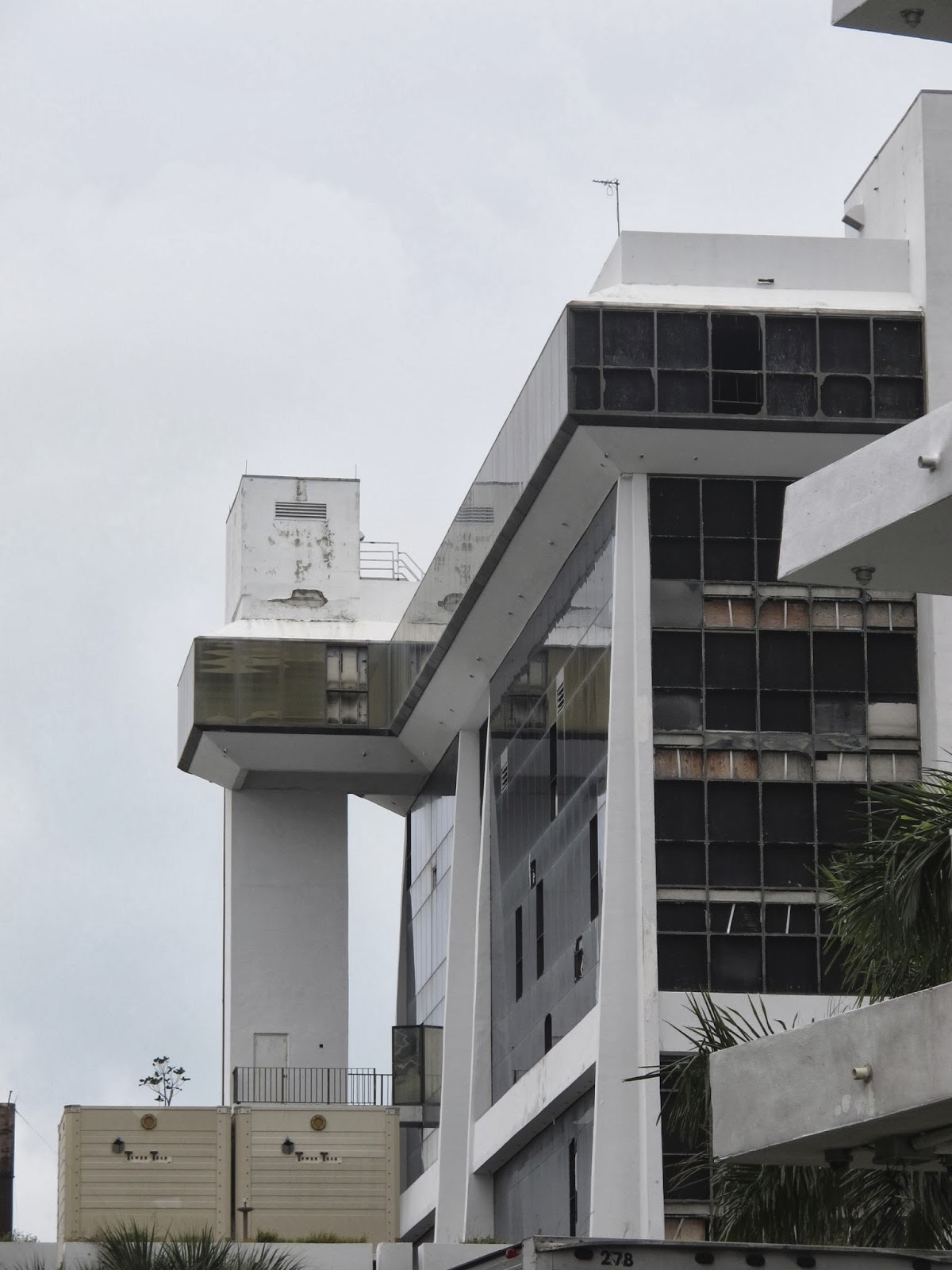 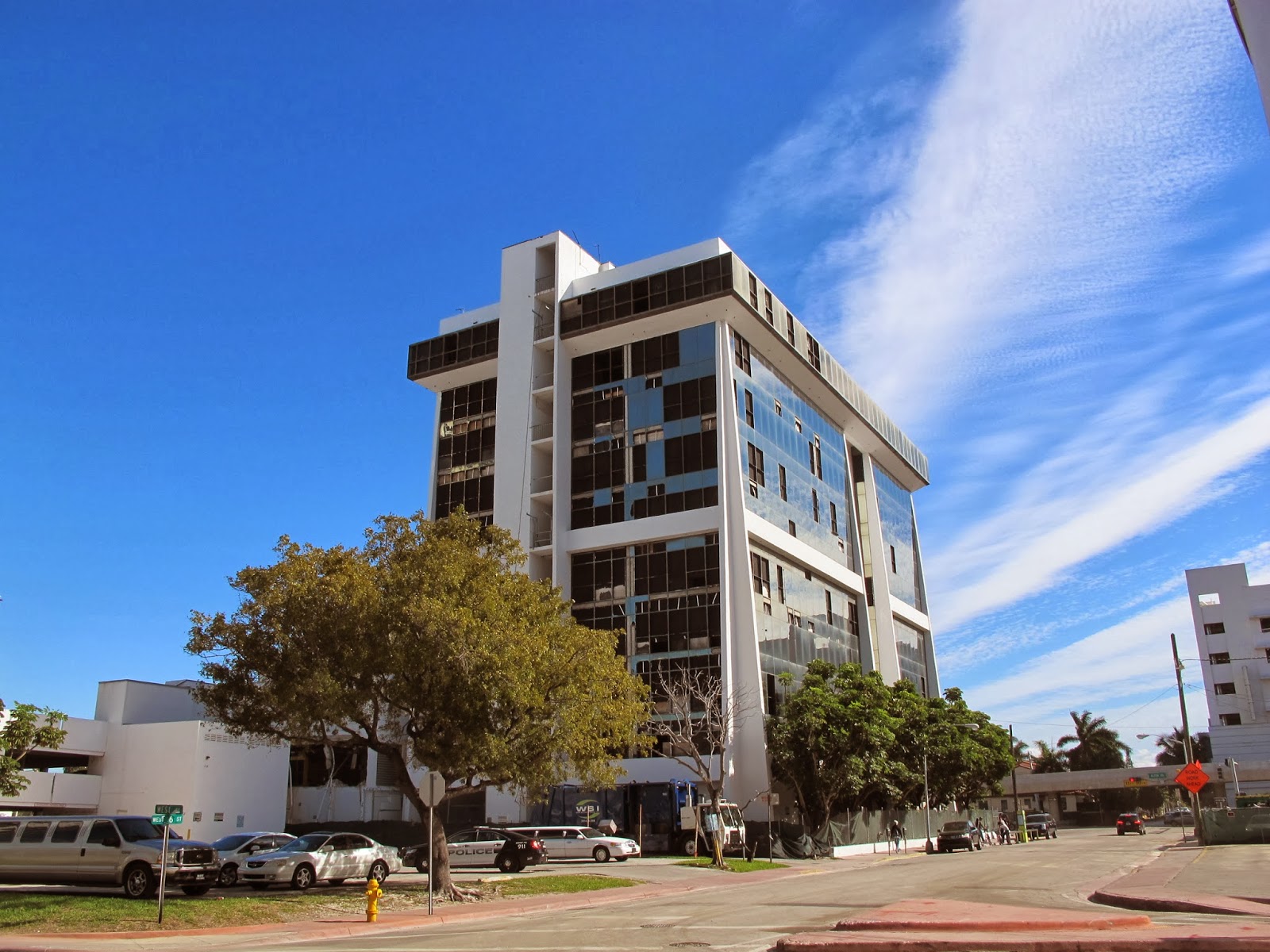 I especially love the unattached elevator shaft, which led expressly up to this top floor, whatever its purpose. Its sleek face seems to embody the late-space age techno-optimism of construction, an Atari joystick of a detail. 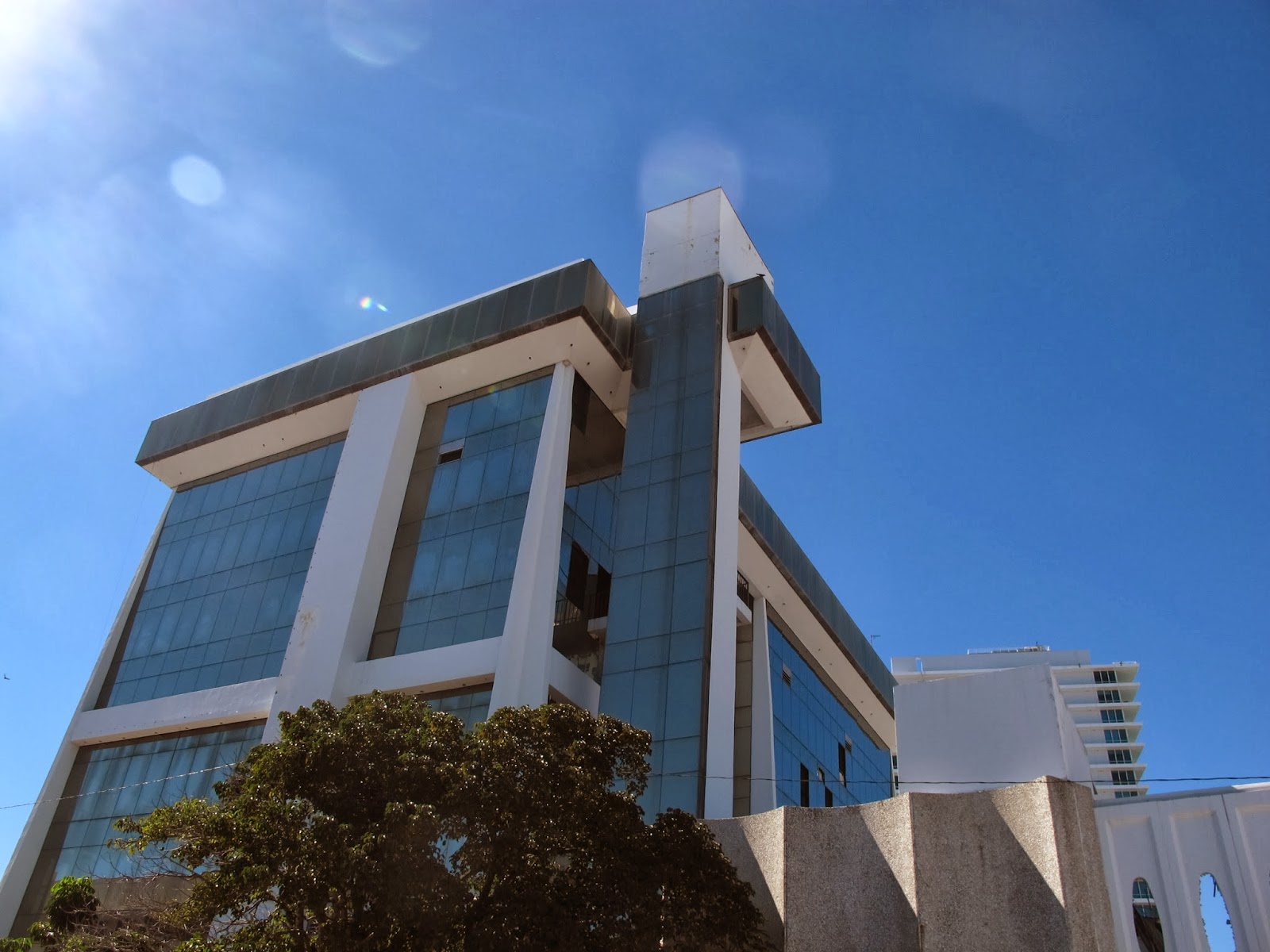 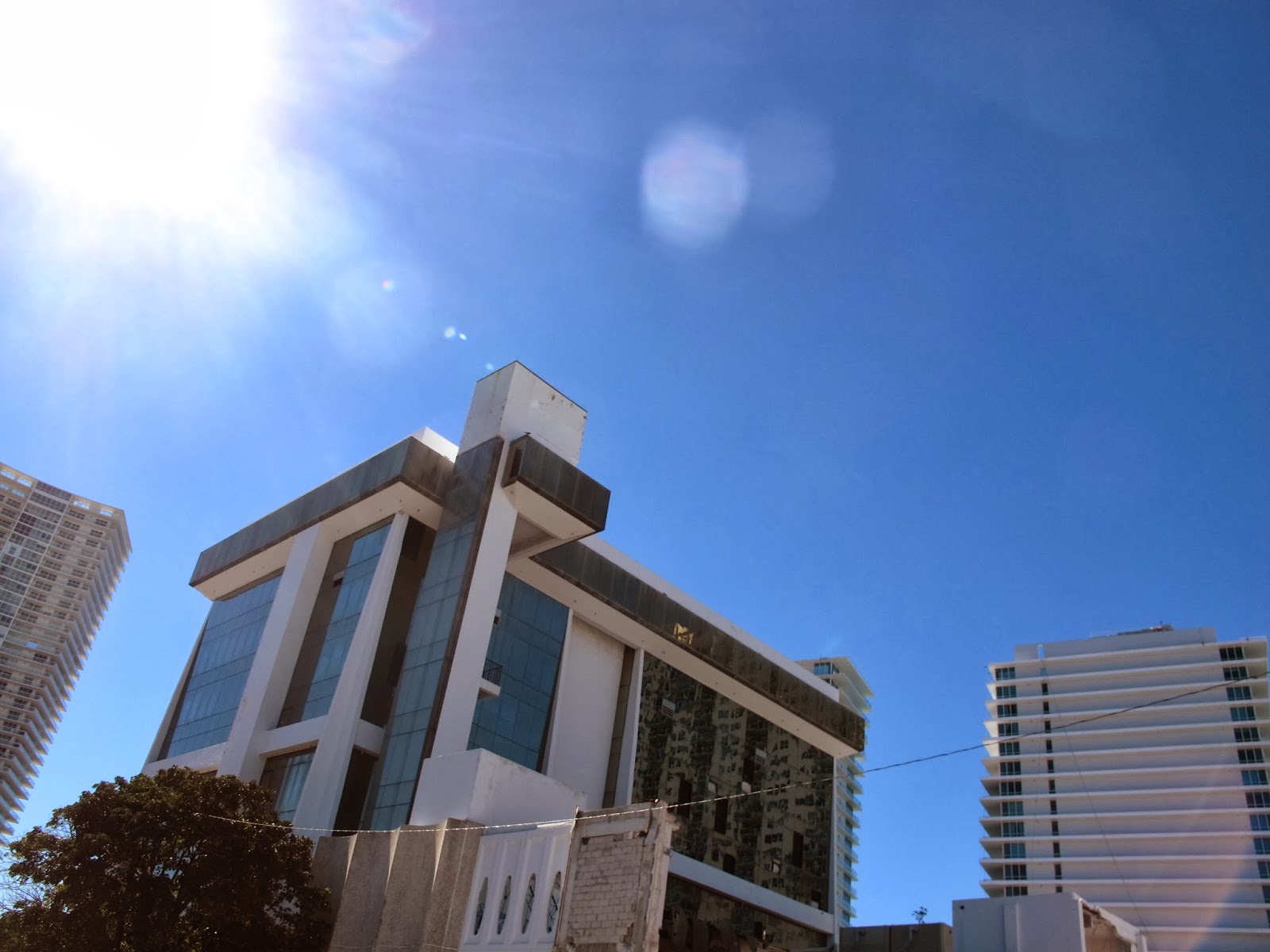 Glass of this tint isn't in fashion right now, either. 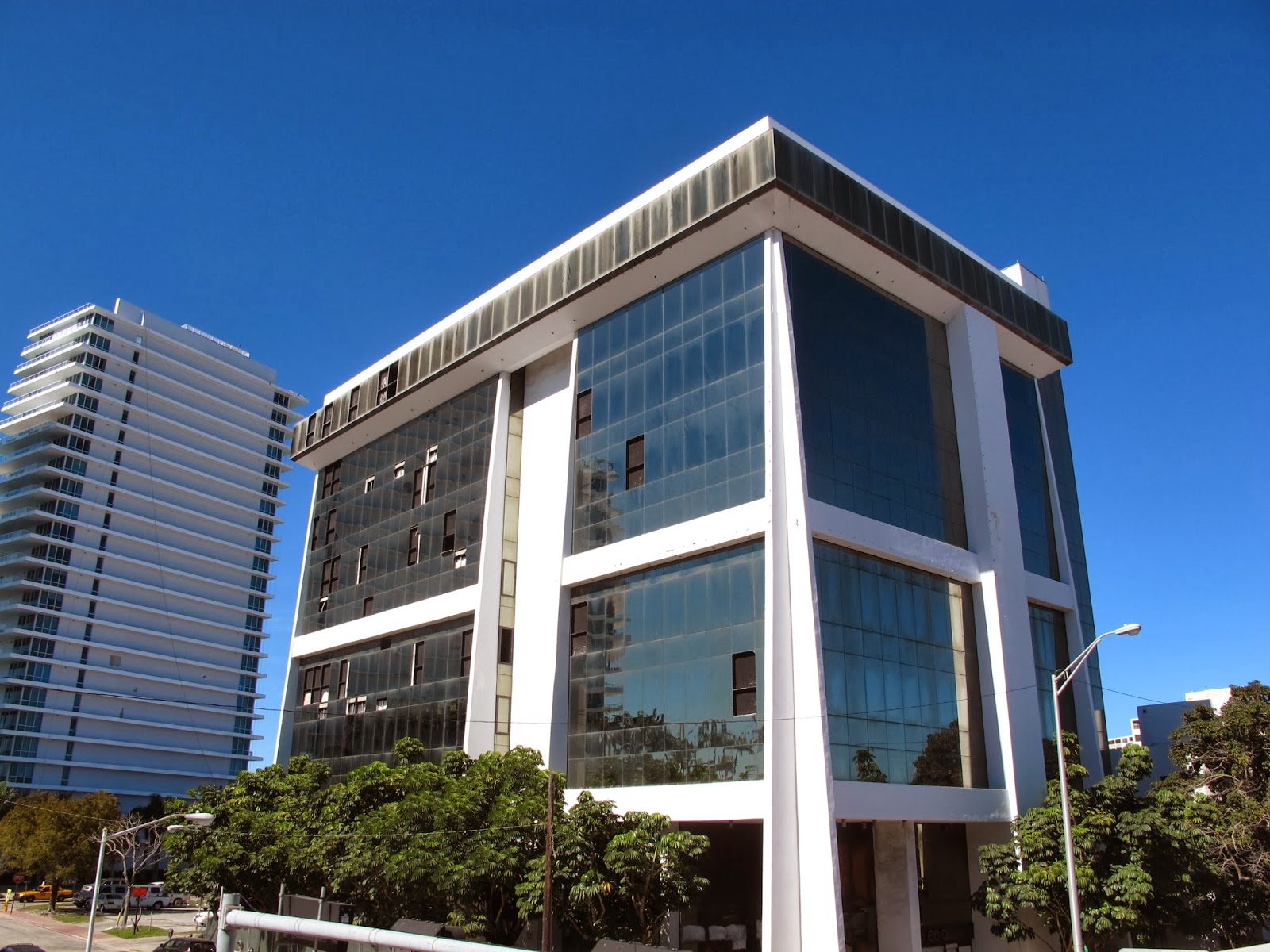 The pyramidal shape is just great. 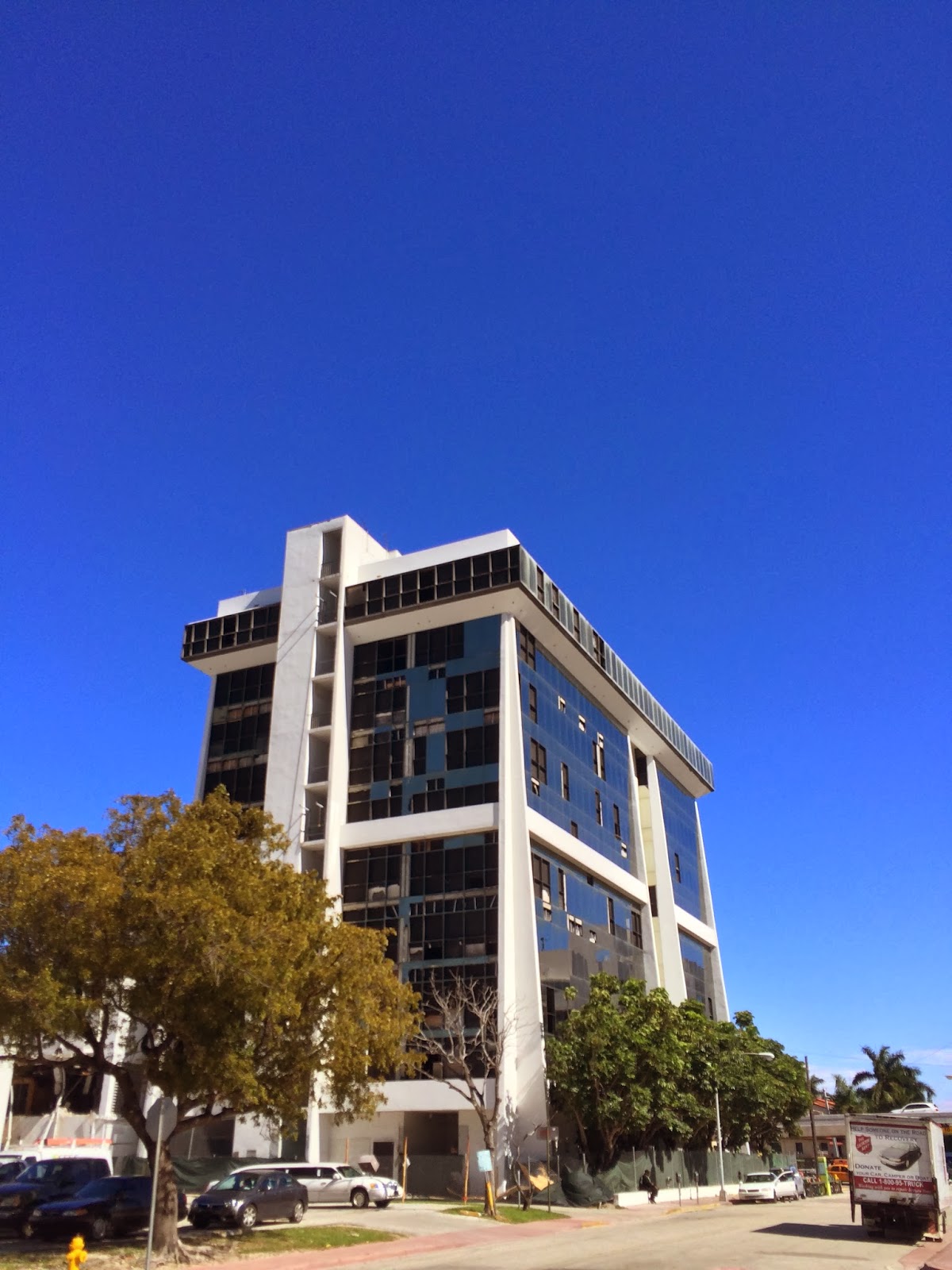 There are plans to build yet more luxury retail and condominium residences on the site, which stretch back to 2011, but development has stalled in the more recent financial climate, and the property, one block away from the waterfront (facing the city, not the ocean) might not be the ideal location for speculation. Plus, its not really clear how much more luxury space Miami needs right now. So the fate of the building seems a bit uncertain for now. 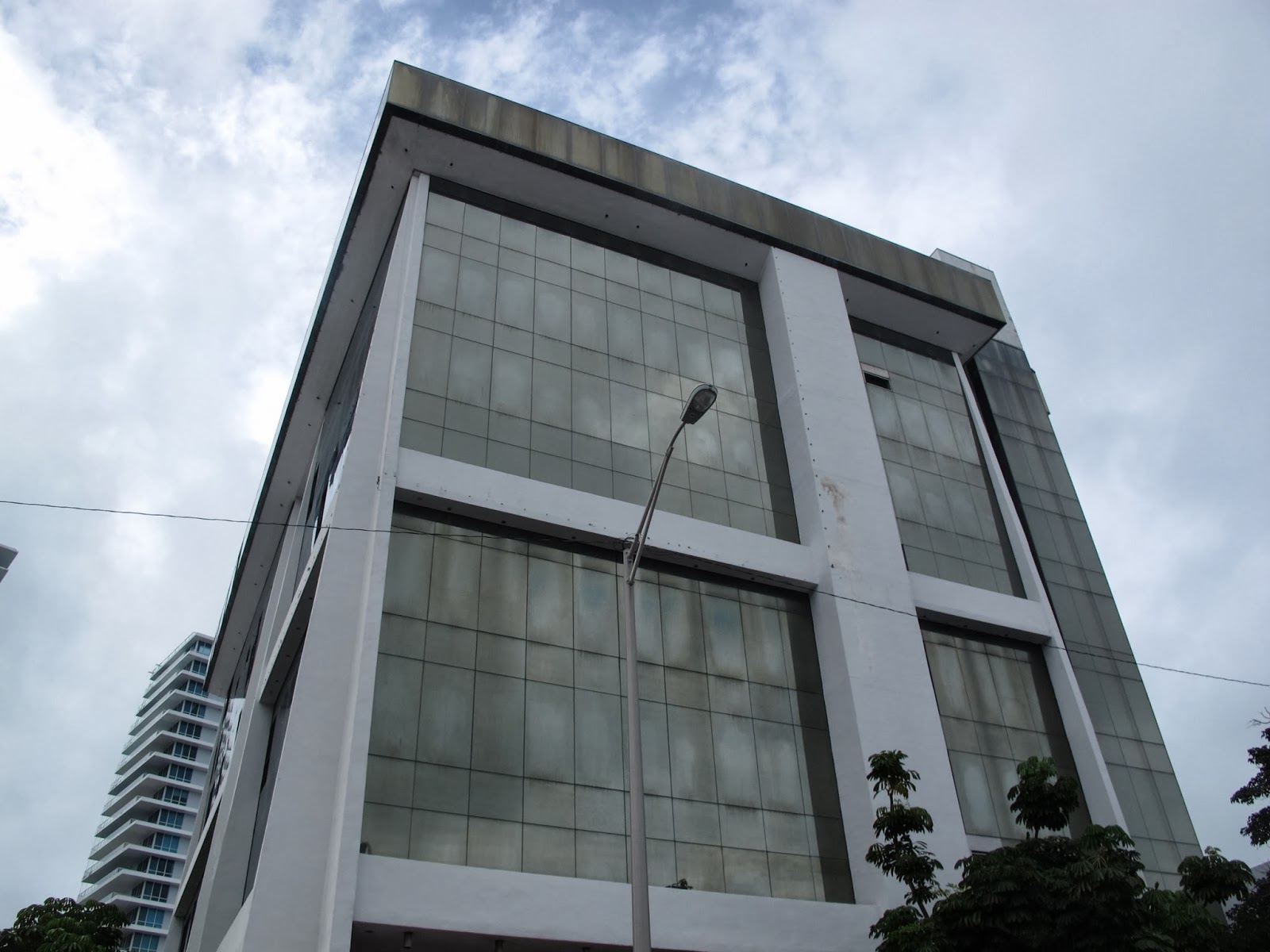 As you can see, I took a lot of pictures of it. It would have been relatively easy to trespass, as the ground floor was only blocked off with stands of chain-link, but I would have had to sneak in at night, and there's something unpleasant about an abandoned hospital in the night, even one that is so glossy in the daytime. 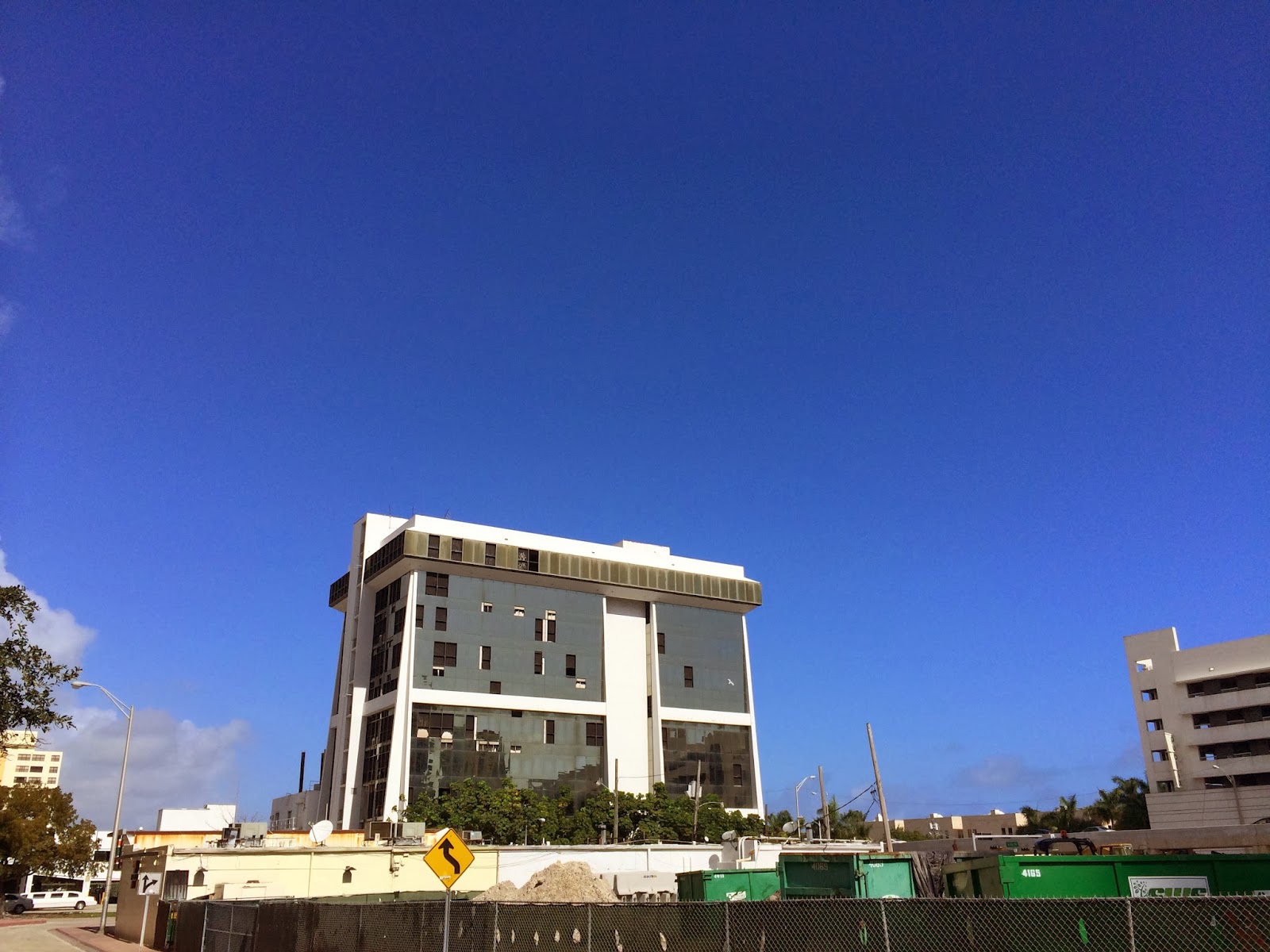 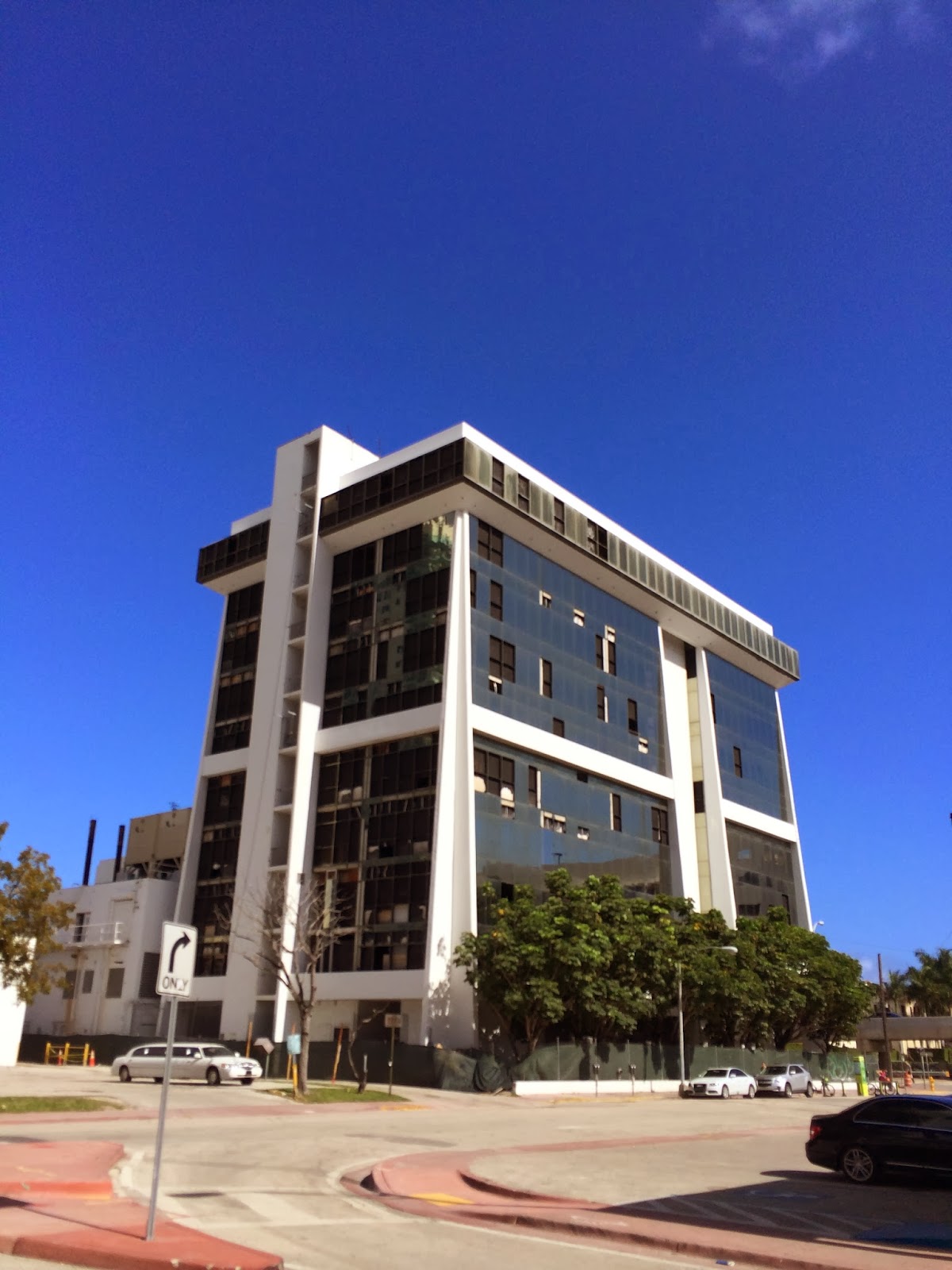 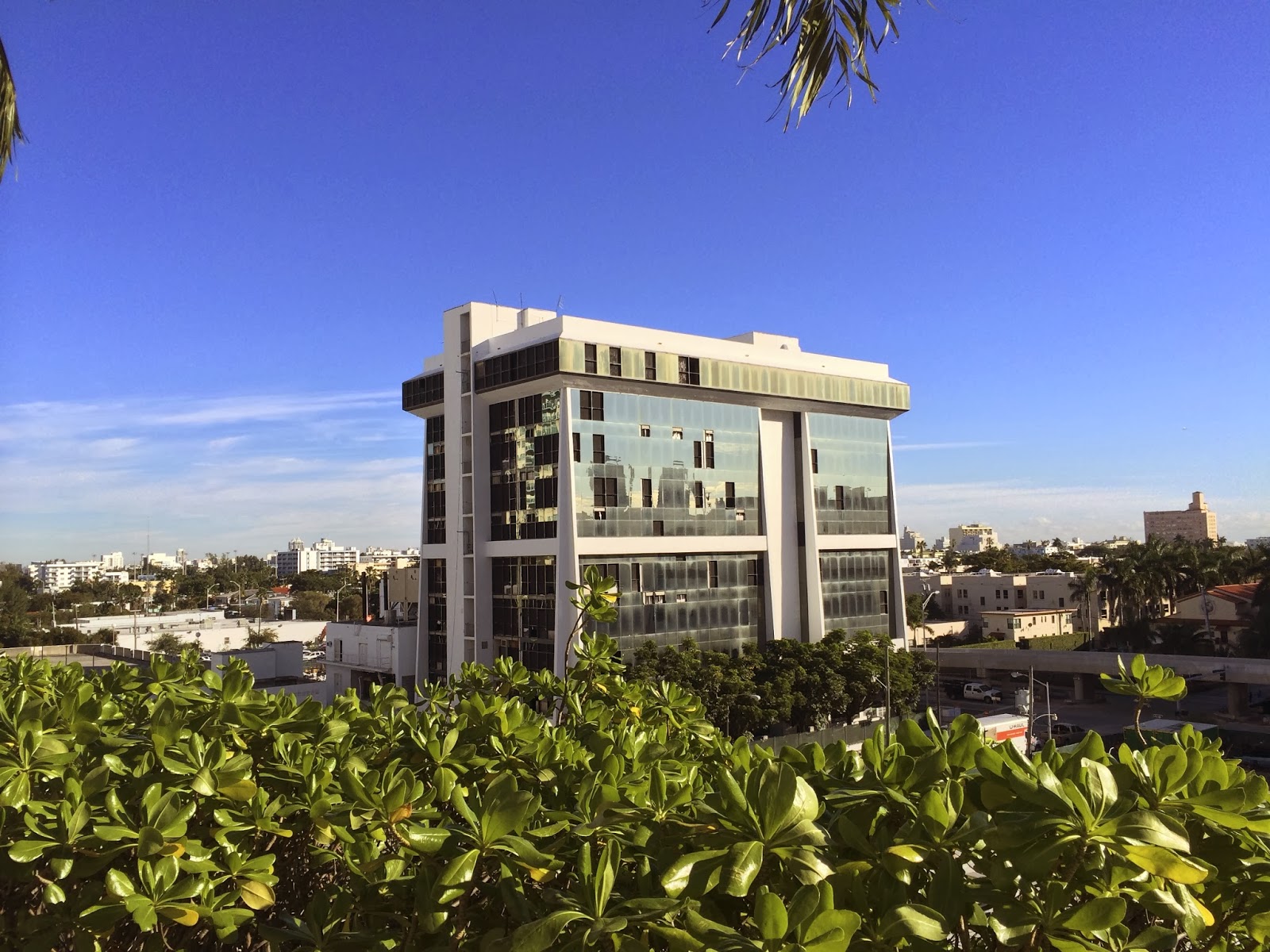 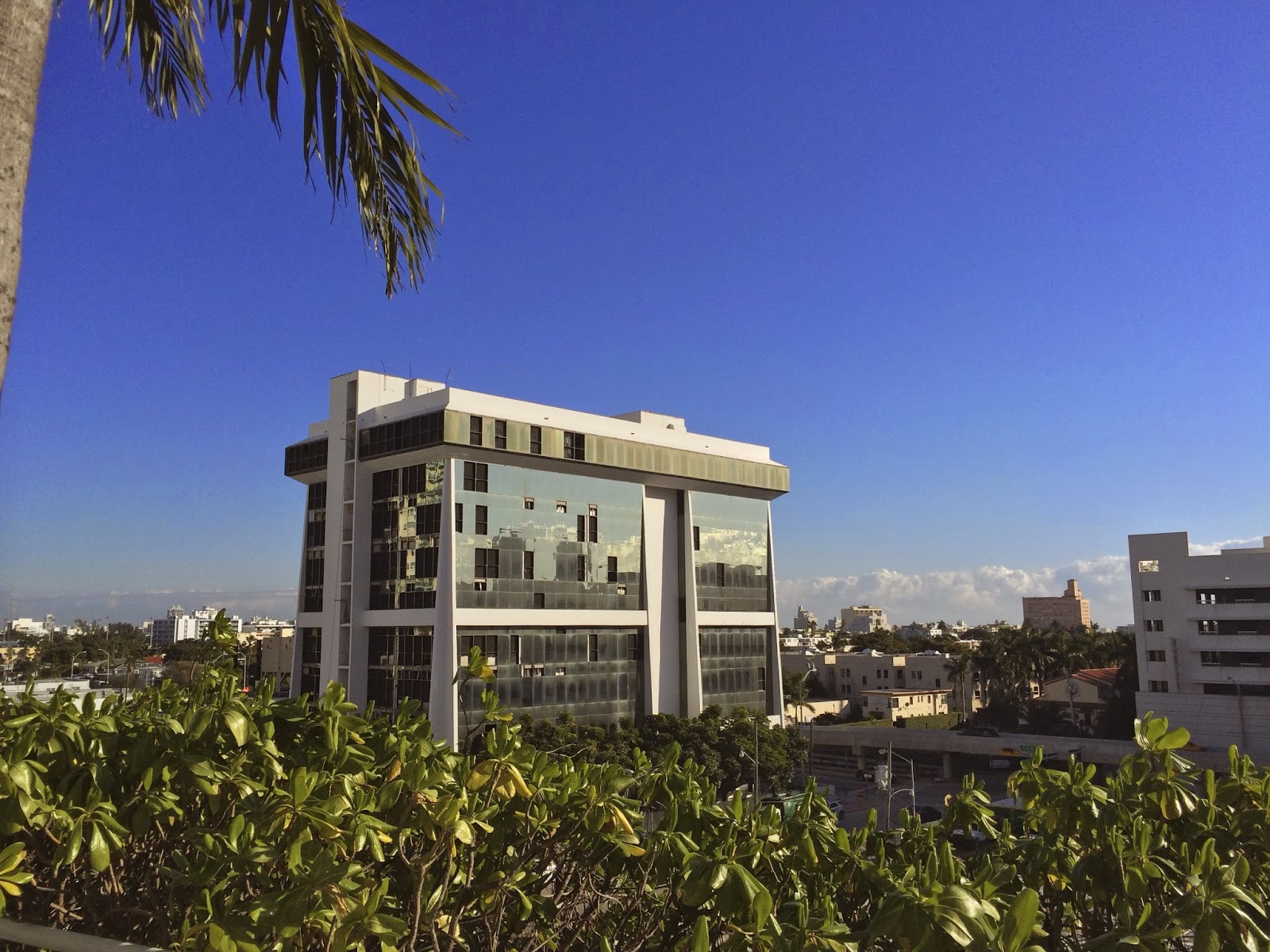 So while the site is slowly prepared for a loosely-defined luxury development to be installed at an indeterminate date in the future, the building stands forlorn in the midst of the its more glamorous neighbors, a marker of the previous city.
Posted by MM Jones at 7:32 AM