A few weeks ago, the Tonight Show starring Jimmy Fallon made its big debut. I don't watch a lot of television, much less late at night, but think Jimmy Fallon is a really clever, energetic, creative entertainer, and nowadays its easy to watch a handful of clips on YouTube and feel like you're at least partly aware of what is going on. 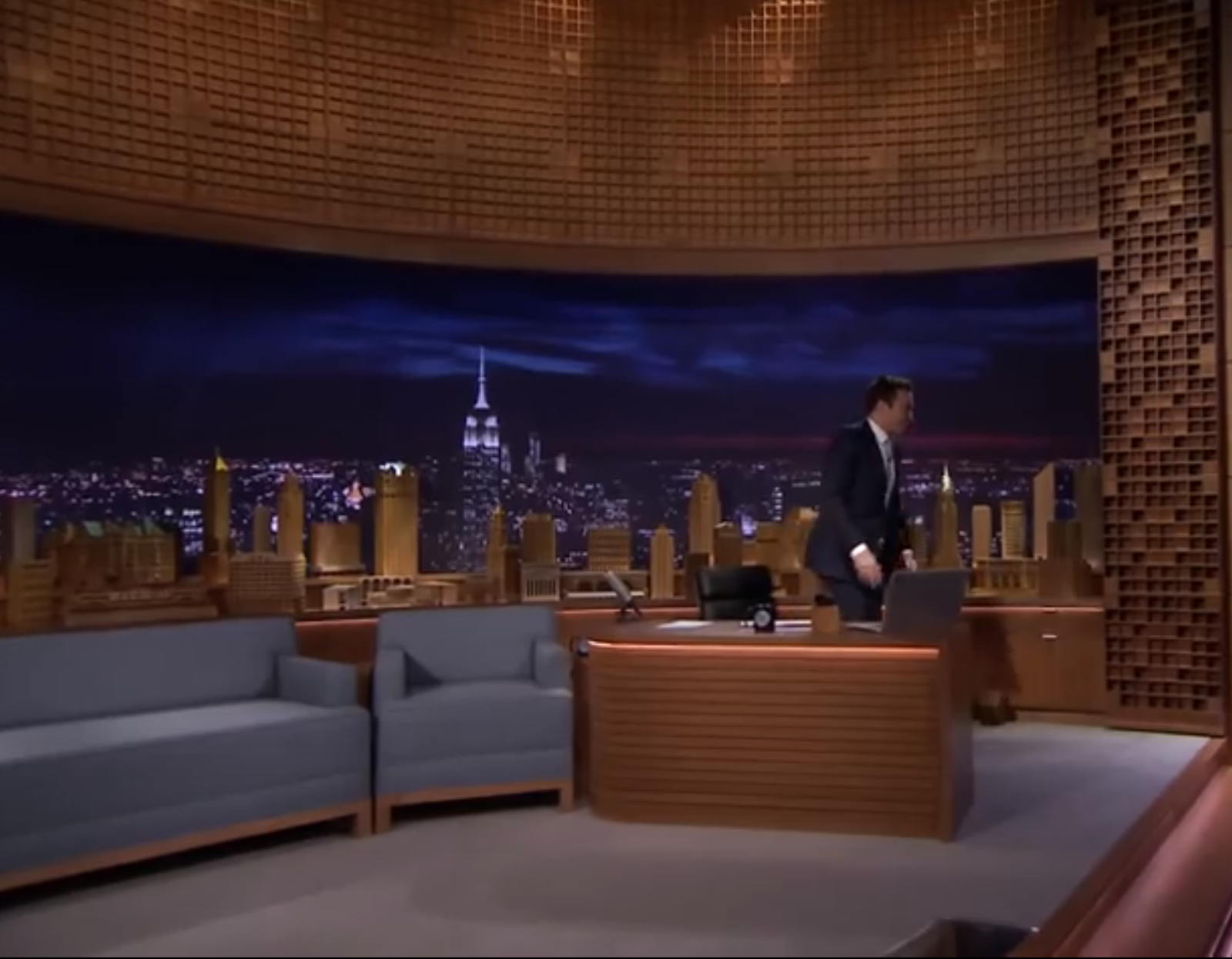 The Tonight Show has an all-new set, which follows the standard desk-and-couches-on-a-soundstage format. What I immediately noticed was the backdrop, which is made up of a panoramic photo image of Mahattan, but in front of it what was especially notable is a collection of more than three dozen wood building models. 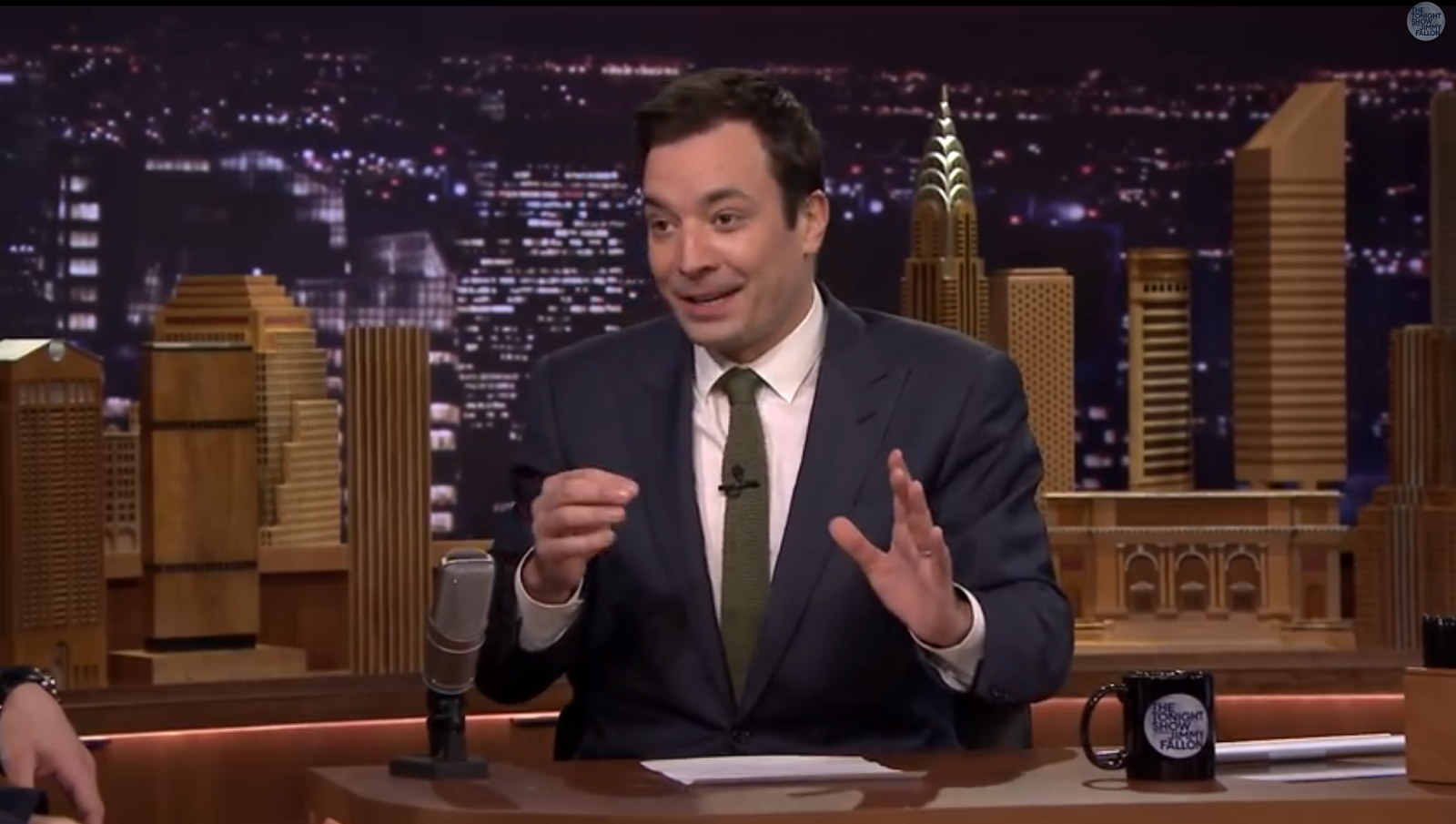 The buildings are arrayed randomly in the display—their arrangement doesn't correspond to their true relationships, and it doesn't appear as though the models are to scale with one another. This makes identification a bit difficult, and I am also not certain that all the models have been detailed with equal faith to their original appearance. There is a small, laser-cut Pan Am Building, visible second from left above; it is less-detailed and more diminutive than the finely detailed McKim frontage of the NYP Library and the Chrysler Building just over Jimmy's left shoulder, which seem to use a variety of materials and might even be from a model kit. 
is the Helmsley Park Lane Hotel on Central Park South.

There are some interesting choices here, besides the world-famous landmarks such as old as the Woolworth and Chrysler Buildings and as new as the One World Trade Center, there are secondary icons like Johnson's AT&T Building, Stubbin's Citicorp Center and Johnson’s Lipstick building. Some other notable inclusions include Piano’s New York Times Building, just behind Jimmy, and at the far left, normally not visible but clearly shown in these scenes of U2 and Will Smith, Foster’s Hearst Tower. Other recognizable but far less identifiable towers include post-modern art deco Trump Riverside, the bland corporate mid-rise of 4 World Financial Center, and the hipster Maritime Hotel. 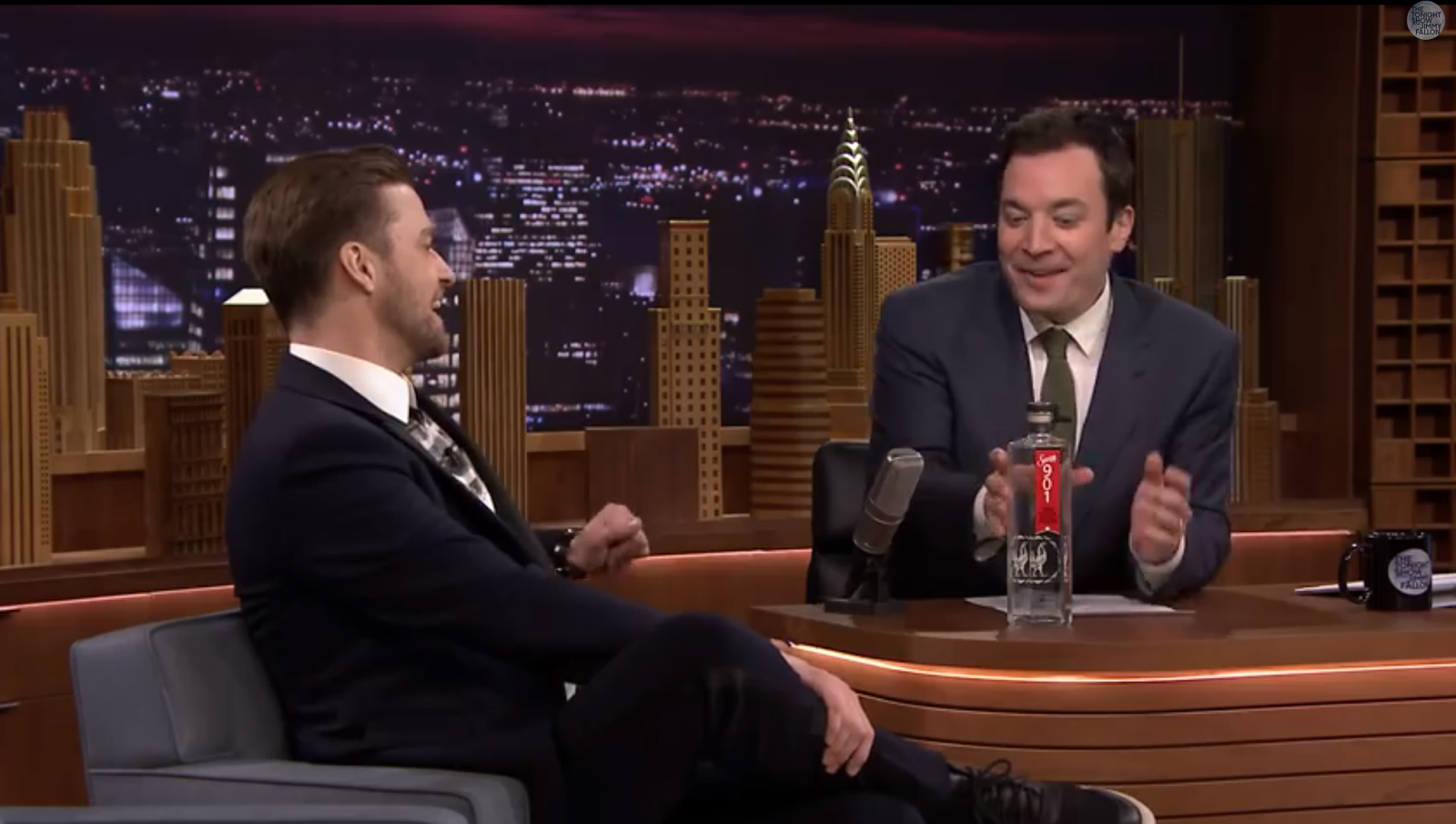 The Chrysler Building shines behind Fallon's right shoulder, with the Lipstick Building in front.
Behind Fallon's left shoulder, in the shadows at far right, is Piano's New York Times HQ,
with a twin tower from Trump Riverside in front.

There is a foreground layer of low-rise landmarks, too, including the Arch in Washington Square Park, the Pier 17 at the South Street Seaport, the Guggenheim, New York Public Library, the New York Stock Exchange, and the tripartite arrangement of Lincoln Center. 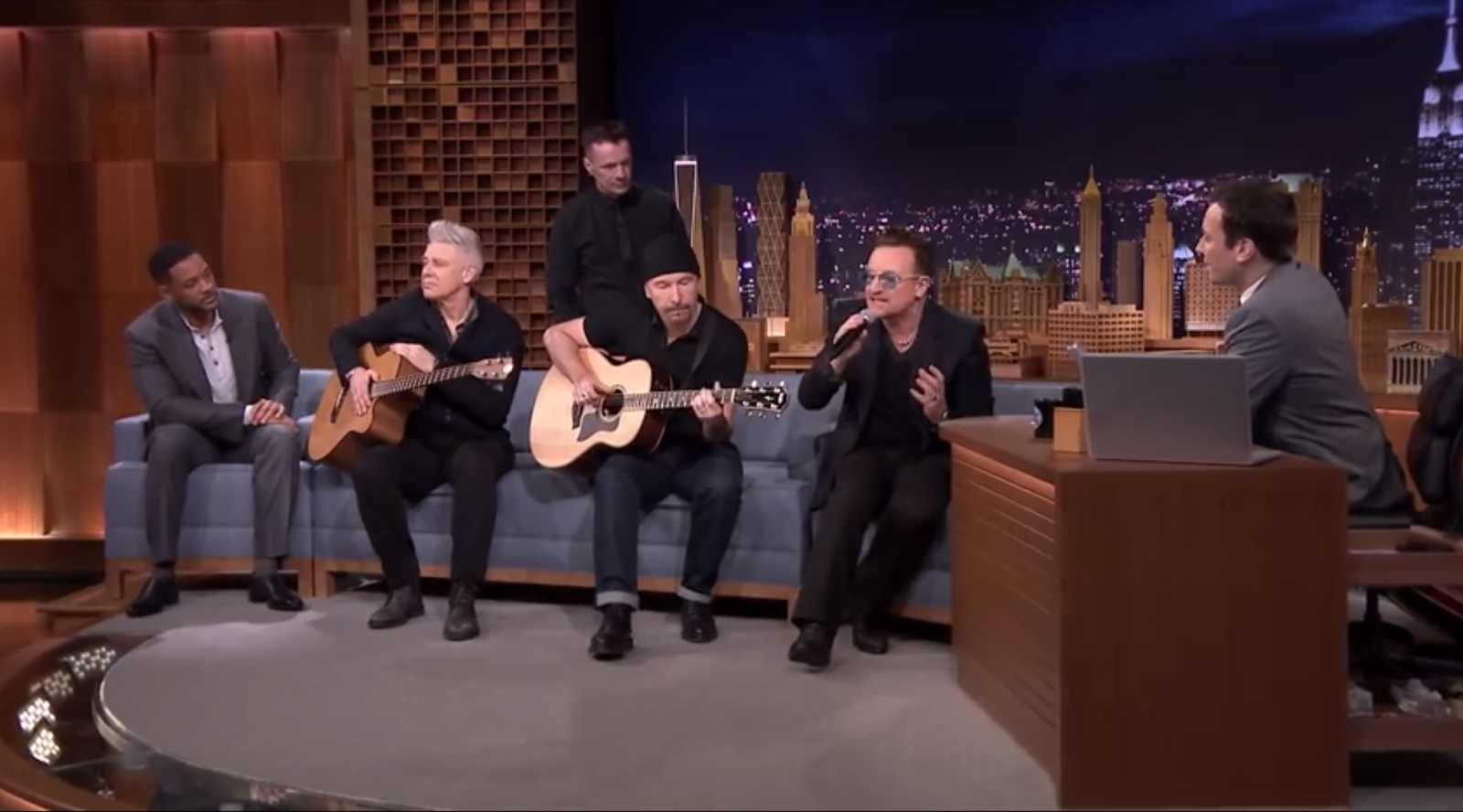 During U2's performance, 1 World Trade Center and the Hearst Tower are clearly seen behind the Edge.

But still, I was only confident in labelled a little more than half of them: is that the Daily News Building just over Jimmy's right shoulder? Is that big, French-Empire Style manse behind the guests, with its green-copper roof, supposed to be the legendary Dakota apartments? Others, like the sample Tribeca warehouse and the prototypical SoHo cast iron façade, would be laborious to pinpoint to a specific real-life building. For all I know, a third of the models are just made-up, and not based on real buildings. I certainly suspect that is the case, even with the larger models such as those between the Chrysler and Citicorp to Fallon's left, at the far right of the background. 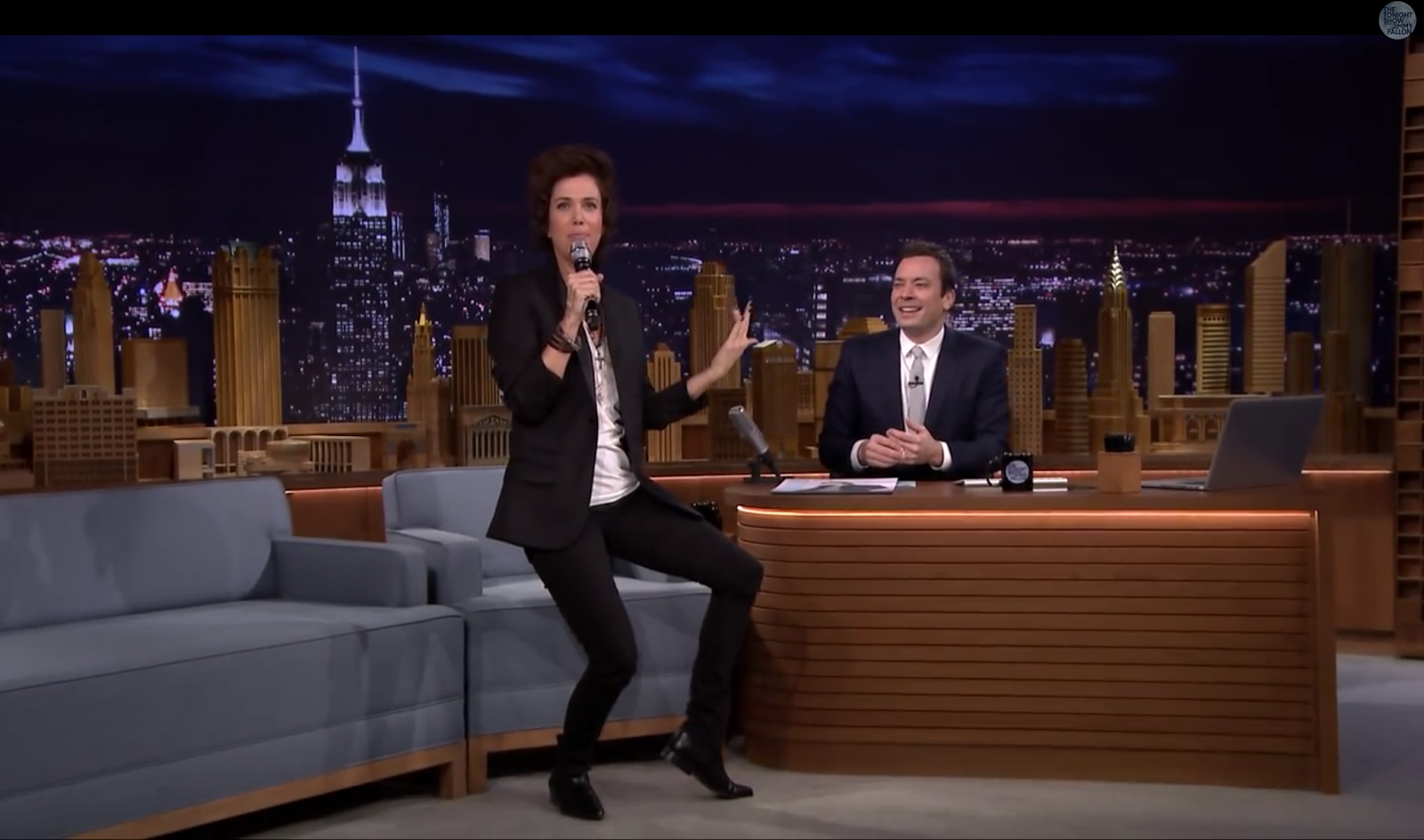 Kristen Wiig impersonating Jason Styles. Lincoln Center is clearly visible at left,
with what appears to be a tiny Guggenheim Museum in front. Behind Kristen Wiig, on her right: A SoHo building, Pier 17, the Dakota?
On her left: a TriBeCa warehouse, Lincoln Center at lower right, and the Maritime Hotel behind.

When Jerry Seinfeld visited the new show, while praising the show, he turned around admired the elaborate background:


”I love the set. I love the rich kid NY chess set. This is the upper east side kid's chess set. It's beautiful, but I would move the chrysler building to king 4...”

Here is a quick diagram I made of the display, with whatever buildings I could identify. Suggestions for changes or additions are welcome in the comments section: