The Architecture of Ouagadougou 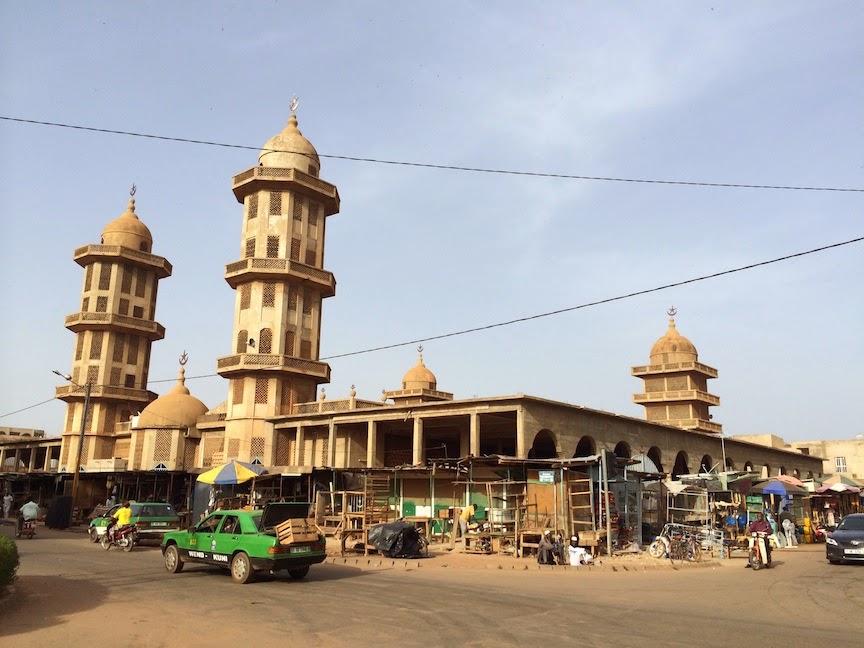 I am just returning from a long trip to West Africa, which partly-explains the three month silence on the blog. I was in one particular city for about six weeks, jumping back and forth to other places, working on multiple projects simultaneously. One of my last weeks there began with the unnerving anticipation of trying to finish everything, a long list of odds and ends and small details along with major, critical steps in the execution of the project. I got a call that Monday afternoon from a major partner, hoping to be informed that the paperwork was complete. Instead, as so often happens in that corner of the world especially, I was told that I would have to wait until Friday for anything to happen. 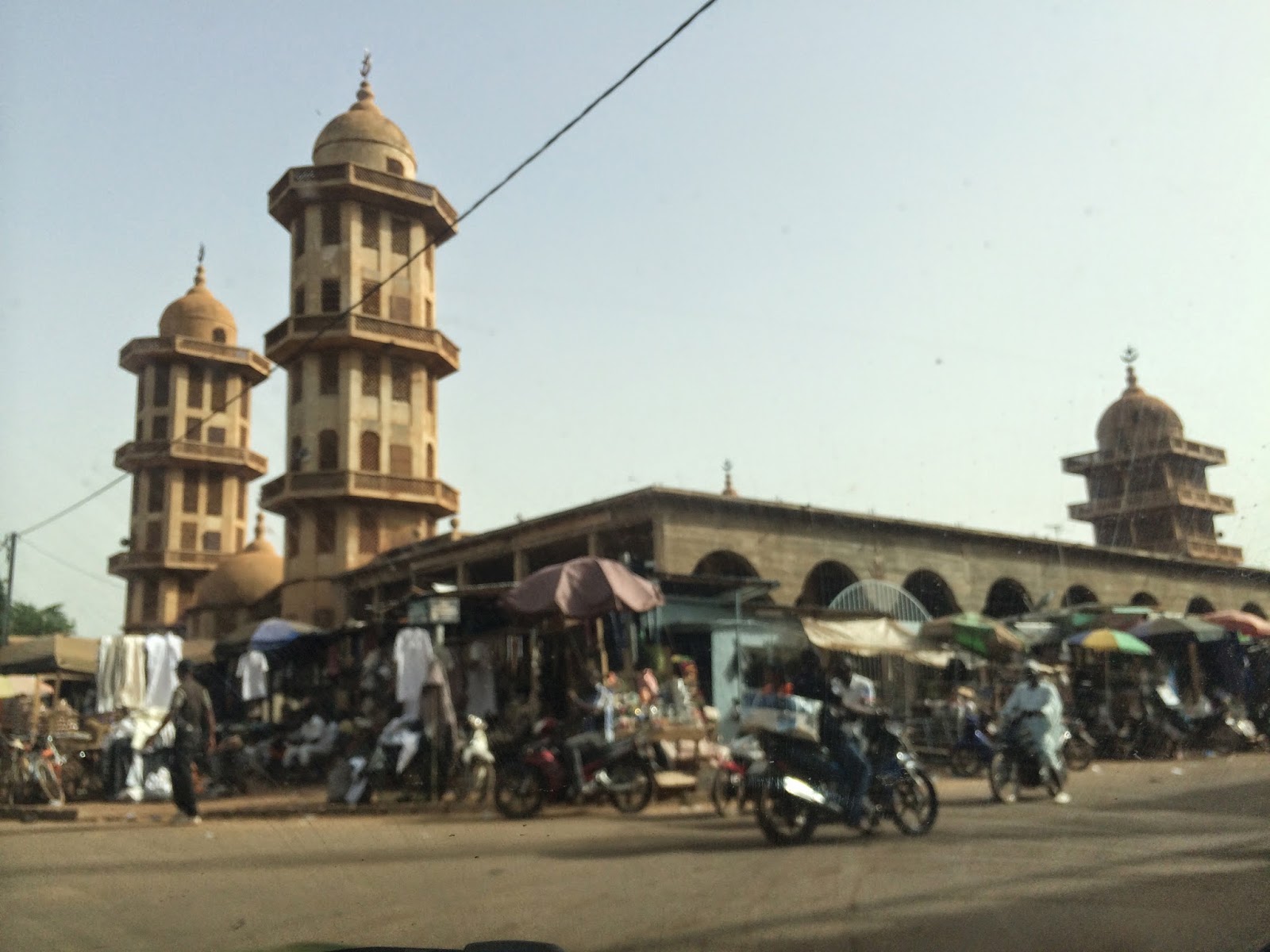 So I had a week to burn, and rather than rage with frustration, I walked down the street to the ticket office of Air Burkina (one of the delights of that corner of the world is that travelers still buy paper tickets from ticket offices, in person), went back to my apartment, packed a duffle bag and took a taxi to the airport. 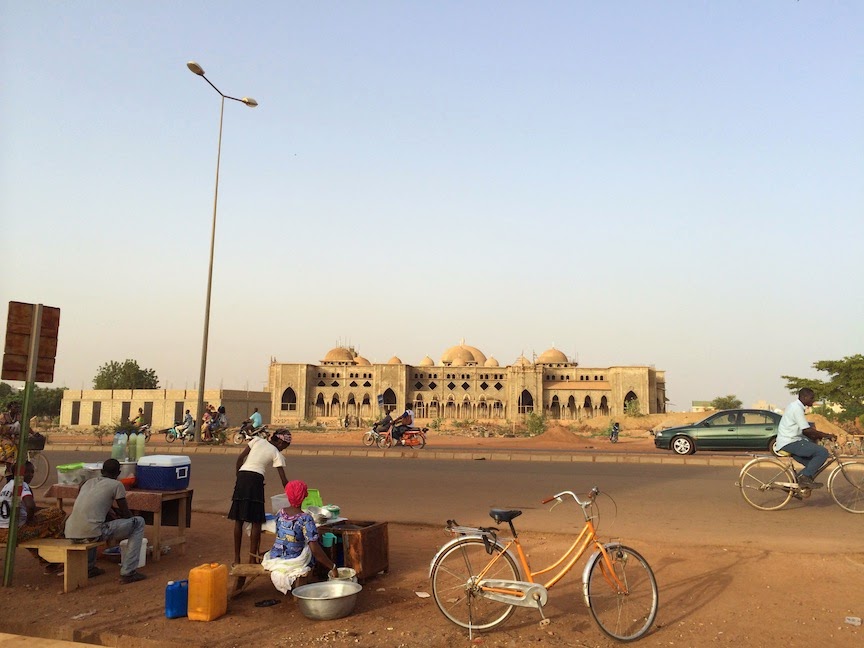 Another mosque under construction.

A few hours later, I was in Ouagadougou, Burkina Faso, a place that I had always wanted to get to, and had for many years been only as far away as the 90-minute flight that I had just taken. I had imagined being there since childhood, laying prone on the floor the living room with the Rand McNally World Atlas, the tip of my index finger my transport across the degrees and meridians. There are few place names that rank so exotically for a kid from Ohio than Ouagadougou—how to even pronounce it—and now twenty-five years later here I was, a smiling immigration officer sending me out into the Sahelian heat with an enthusiastic “bon arrivee.” 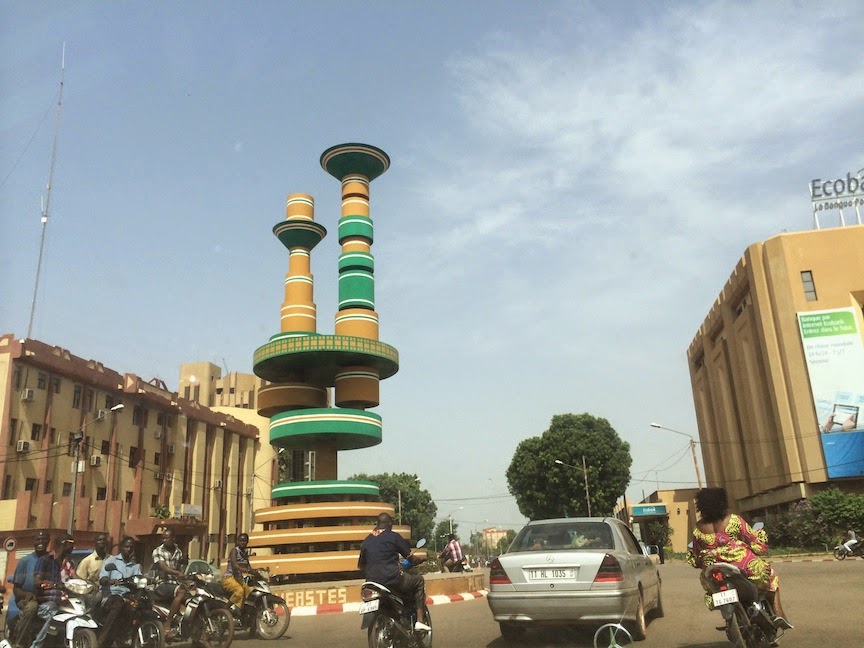 I hired a taxi to drive me around the city before I even figured out a hotel room or changed money. For $14 a day, a lawn-green vintage Mercedes zipped me around the city, and I spent most of the next three days taking photos of buildings. 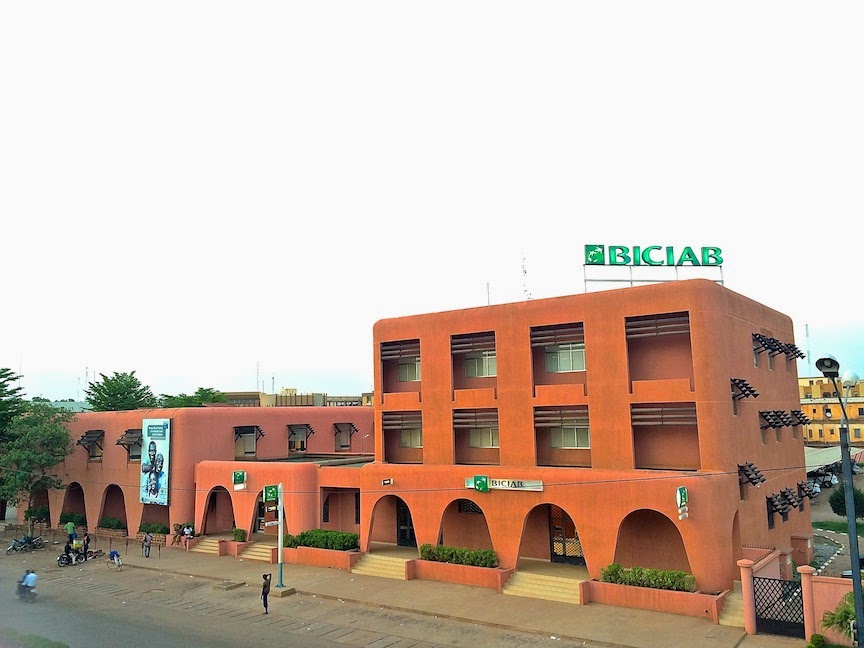 What I saw, and photographed, astonished me. Nothing in my most imaginative moments of childhood, or my years of working in neighboring countries, had composed my expectations properly for the city that I came upon. 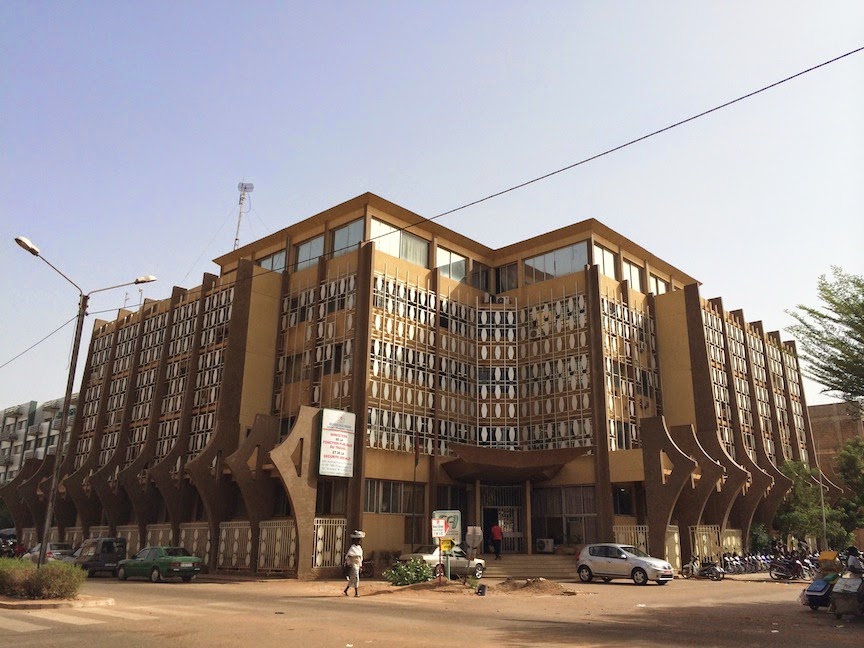 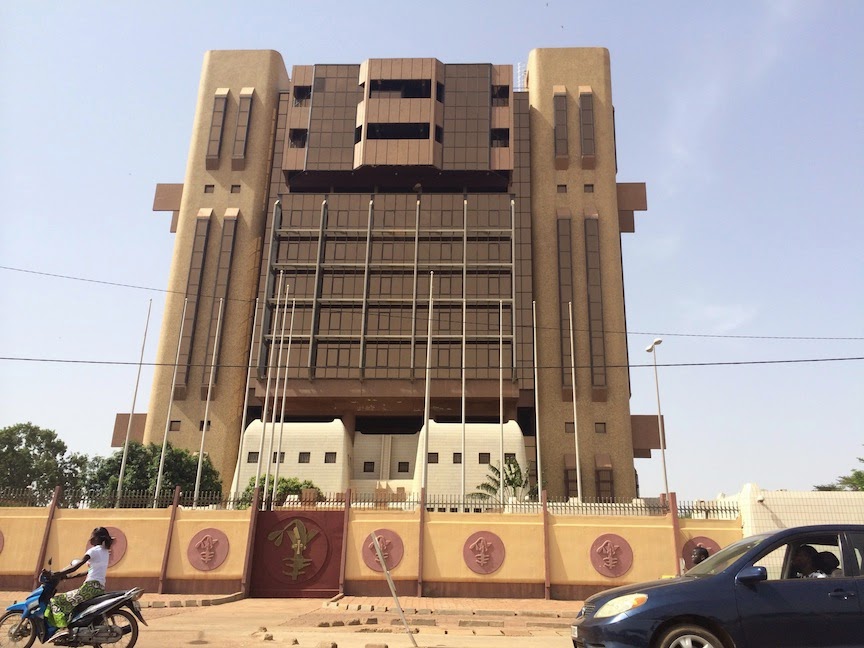 Amsterdam and New Orleans come to my mind as two cities predominated by their own architecture, and where architecture somehow develops into its own condition: where each new building that rises in the city actively attempts to contribute to a wider, existing milieu. 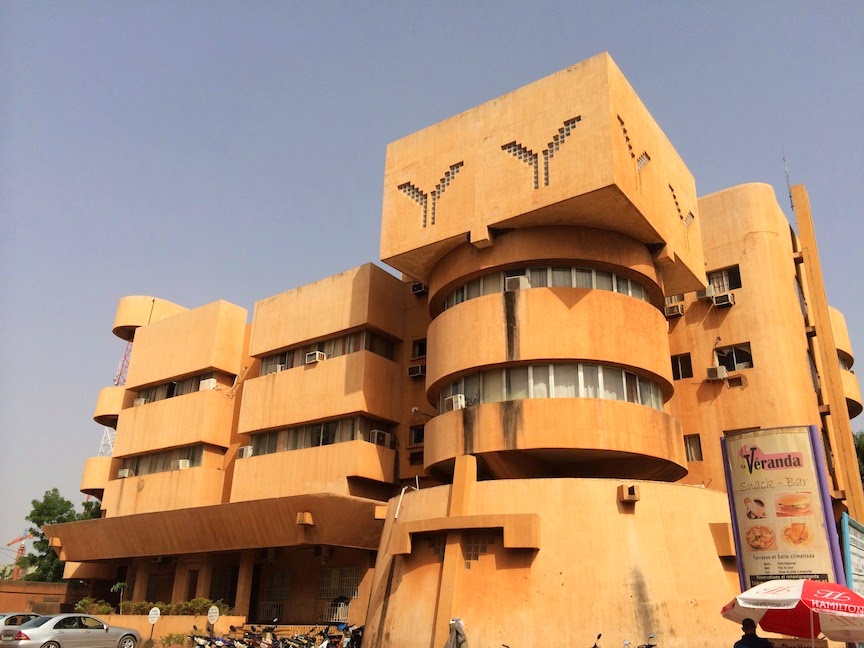 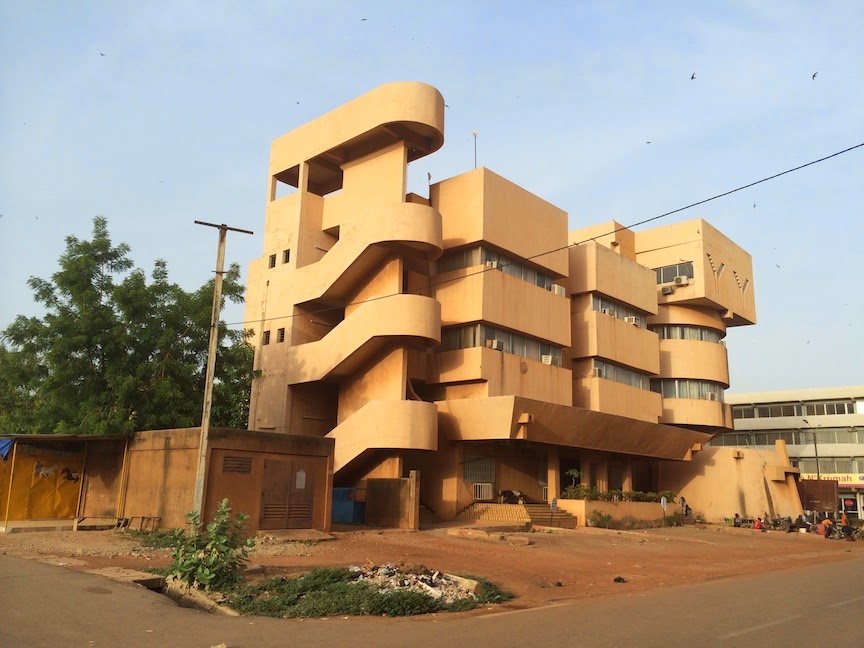 Two views of the same building: A Ministry

To this I would add Ouagadougou: it is overabundant with a very particular, contextual variety of modern architecture, from the older ministries and the more bombastic edifices of the semi-autocratic state, to the commercial and banking offices, to the hotels, cafés, cinemas, markets, and fuel stations. Perhaps this is why, like Amsterdam and New Orleans, a relaxed atmosphere predominates in Ouagadougou: quite a contrast to other capital cities, in the region, tense and chaotic. 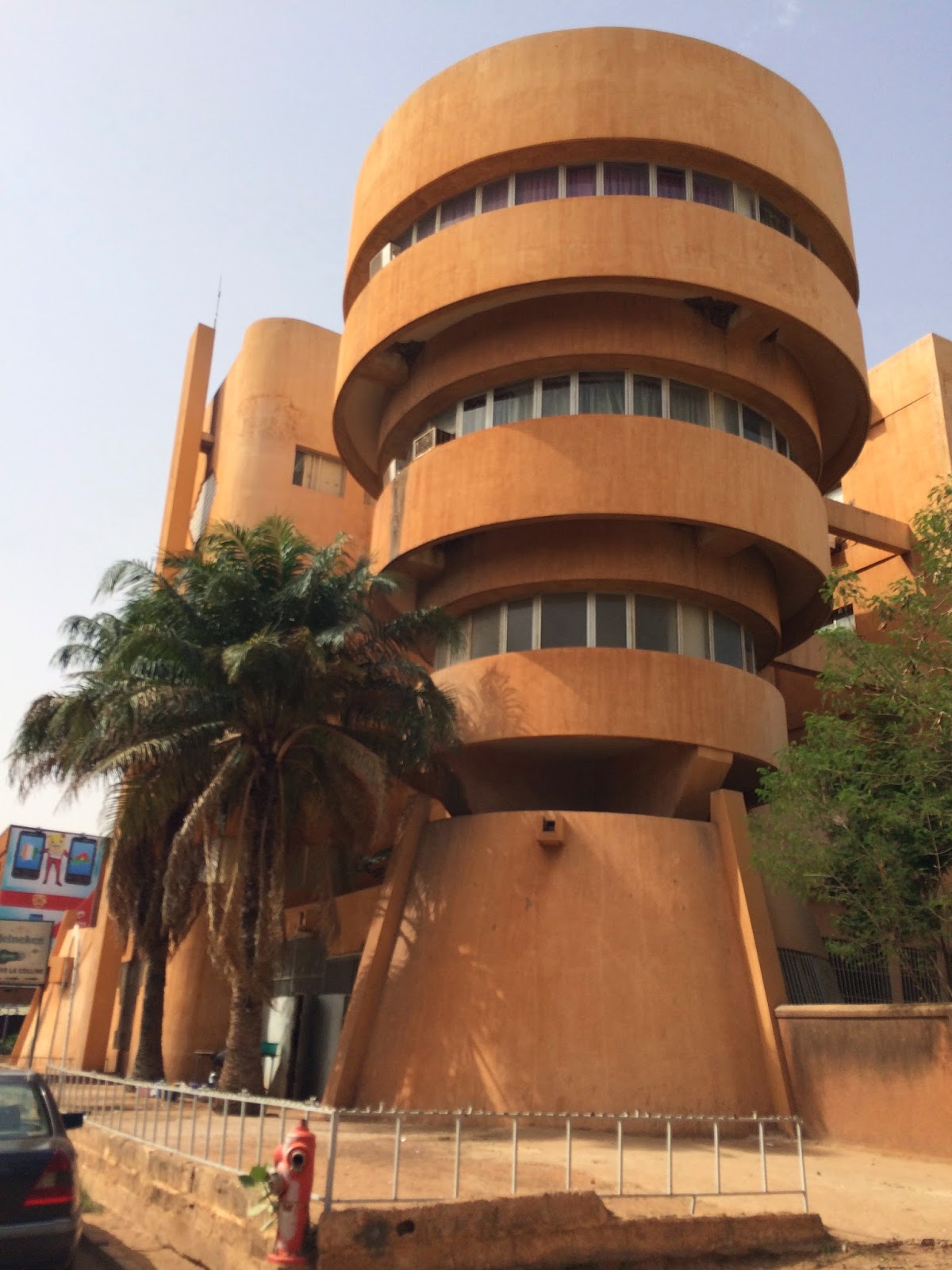 There is hardly a block without remarkable, if not masterful manifestation of a desert design that is difficult to date: some of the more dilapidated examples are from the 1960s, a product of the post-independence development of the sovereign state, many others augment the 25-year president's rule through monuments, yet others are just now being completed as the country experiences a gold-mining boom, becoming one of the fastest-growing economies in the world. 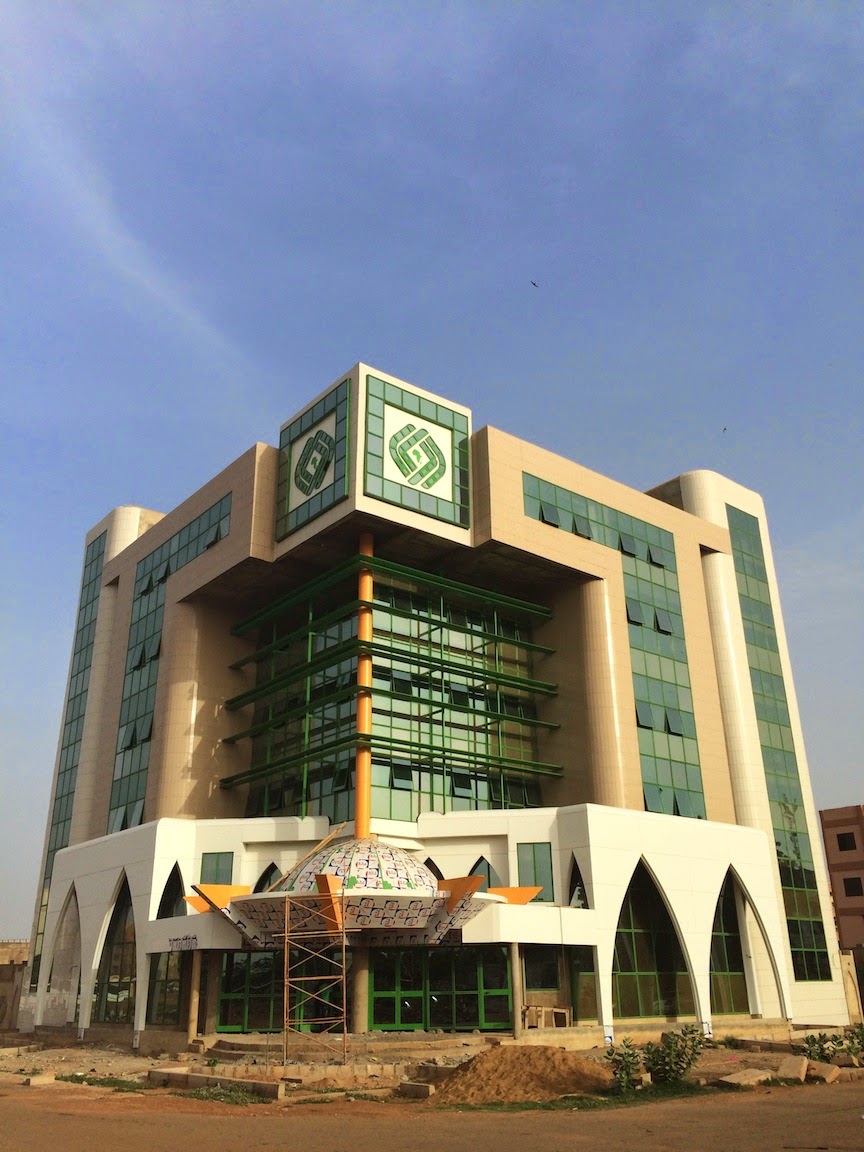 A soon to be completed commercial tower, probably a north African bank. 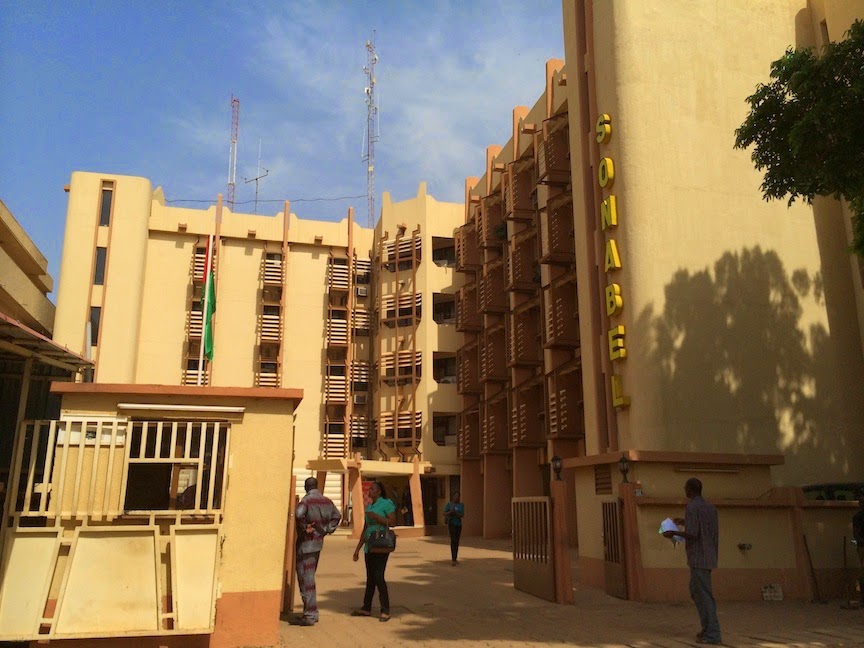 Ouagadougou is basically a small city, although it is also a national capital of perhaps as many as two million people. Its commercial and governmental center is quite small, and most of the city spreads outwards in simple residential quarters of single-story, metal-sheet-roofed house compounds. 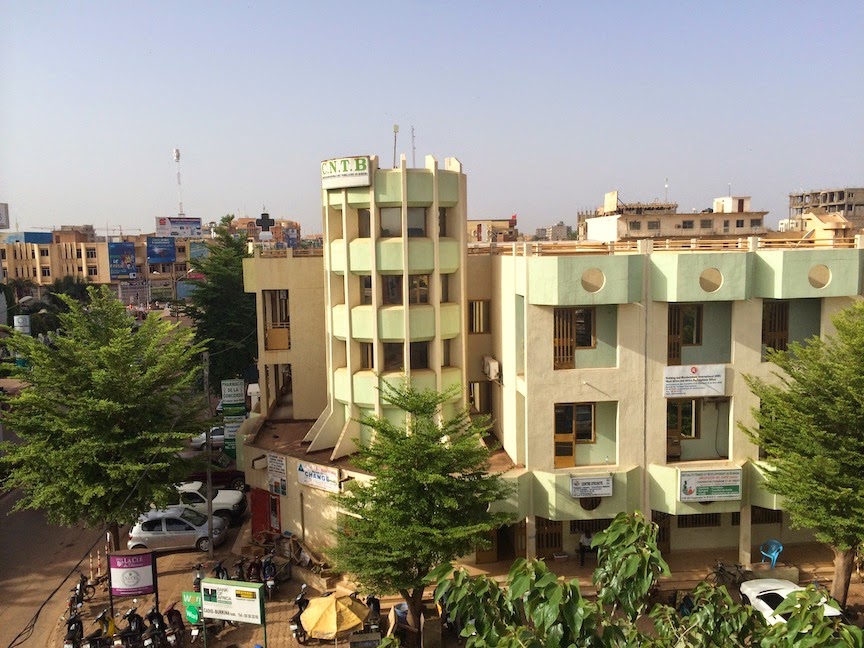 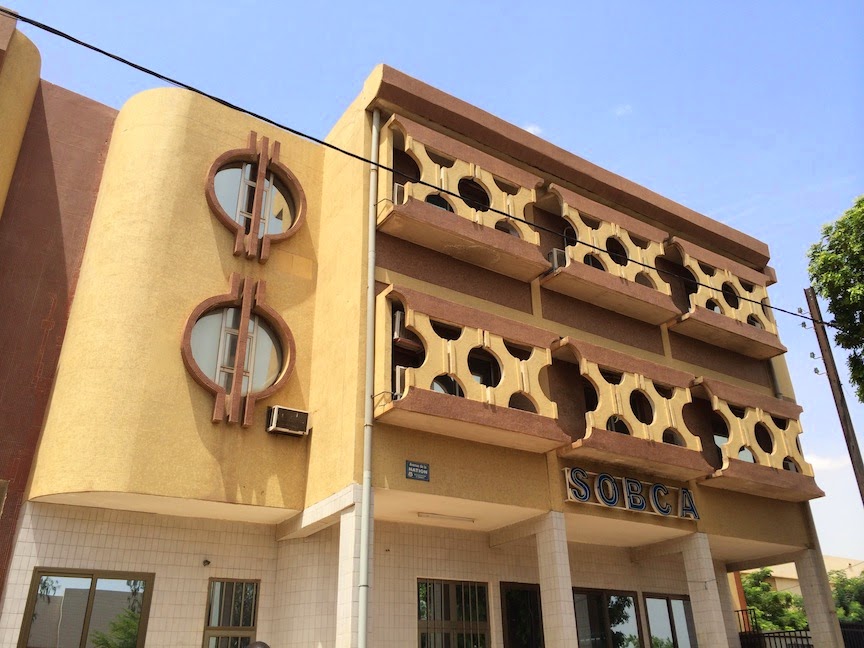 I am going to post many of these to the Bauzeitgeist Tumblr, to give each its own proper platform for appreciation, but I thought that putting them all here, a single volume, would be slightly overwhelming just as the city of Ouagadougou itself is; I was only there for three days, and hardly had time to photograph a third of the buildings that rushed passed on the road, much less learn anything about the particular history and provenience of each. 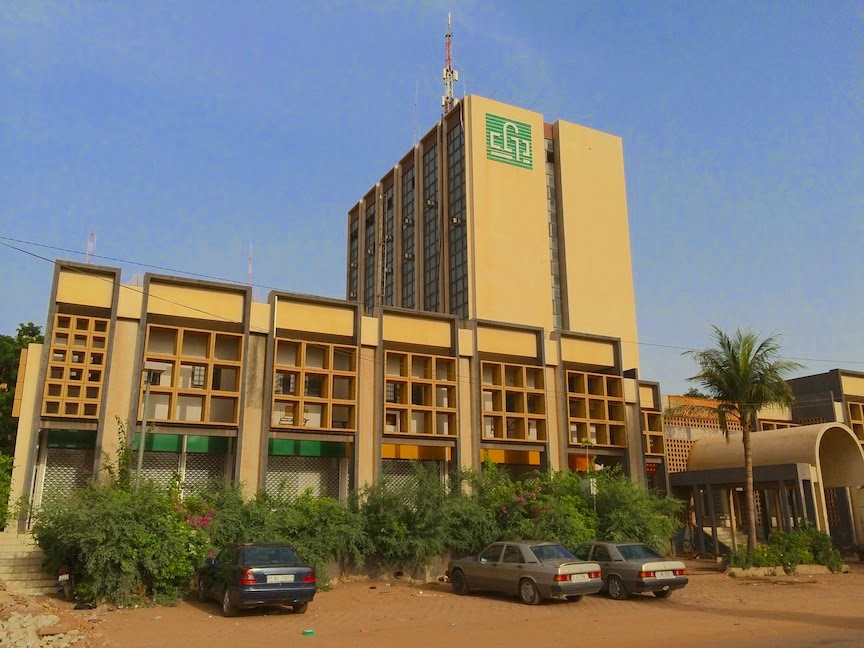 For a bit more detail and to pace this post for length, I'll split into their own separate post three particularly fascinating examples of the city's architecture, but what I've noted here is what little I know at all about what I was able to see and capture on my iPhone (tragically, my Canon G12 broke before I got there). If I had the time, I would embark on a project to write an architectural guide to the city—it certainly deserves to be an architectural destination.
Posted by MM Jones at 8:35 PM