The Three Best Buildings in Ouagadougou

With all of the previous post's photographs, I'm splitting the post from Ouagadougou in two, this is the second part. In a city which overwhelms with astonishing architecture, here are what I thought were the three high points of the city's many intriguing buildings, in order of how I saw them.

Like many self-aggrandizing works of architecture, this astonishing office block is a chapel dedicated to the often-bizarre pseudo-colonial politics of the Trans-Sahara. 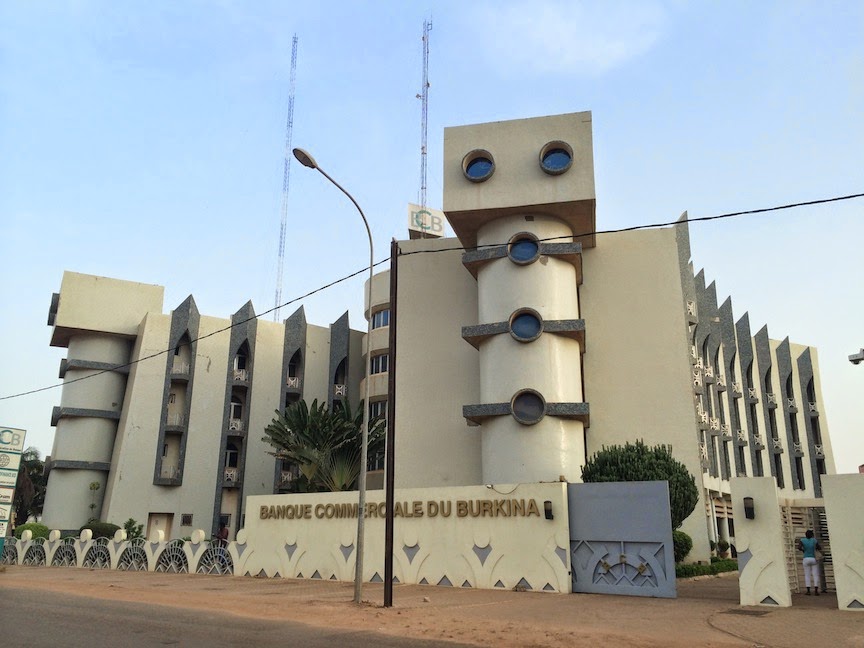 The Commercial Bank of Burkina Faso is one of the more prominent and permanent relics of Libya's Muammar Qaddafi's (however you like to spell it) various forms of intervention into Burkina, as part of a wider strategy to wield influence across Western and Central Africa at the height of his power in the 1980s and 1990s. 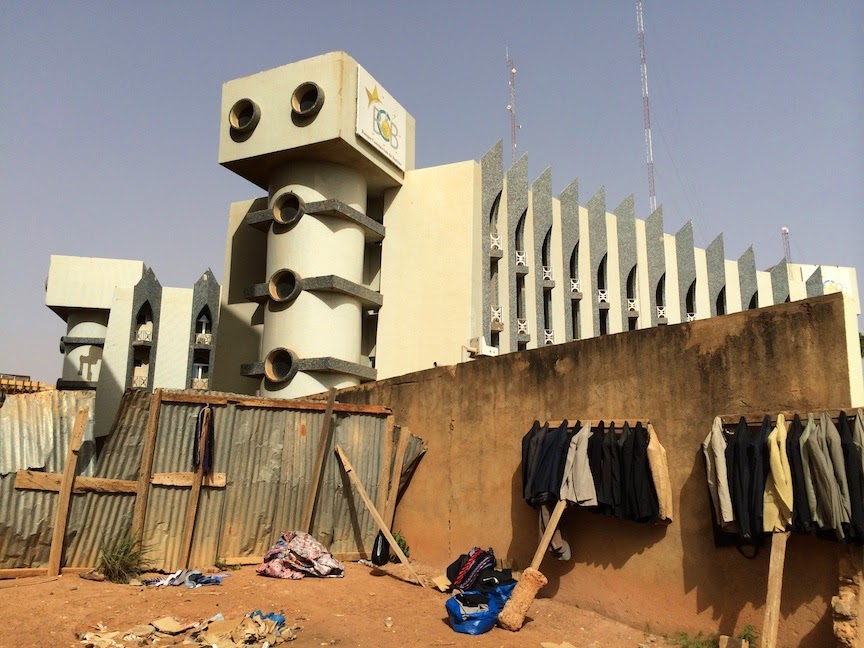 This resulted in this cartoonishly eloquent building, its body a pair of concave wings, tiled in two shades of greenish-blue, ribbed by an order of sharp-pointed fins which faces Ouagadougou's main commercial thoroughfare. The single most remarkable element is unquestionably the four robot-headed corner circulation wells, cubed where the rest of the building is curved, with protruding porthole windows where the rest of the façade is fronted in columns of tiny balconies, which are not not juliette-terraces off the offices but ornately-formed mechanical spaces to house external air conditioning units—this is not the only example such small external shelf-balconies without direct door access).

What's all the more incredible to contemplate is that this building was not designed or built in 1977 but was opened by Qaddafi personally in 2003, the chipped tiled exterior is barely ten years old(I find this still hard to believe and wonder if this building was built at the banks' founding in 1988 and that Qaddafi opened some other, newer building elsewhere in the city; such is the dearth of contemporary architectural history scholarship on the city that I haven't been able to work this out). 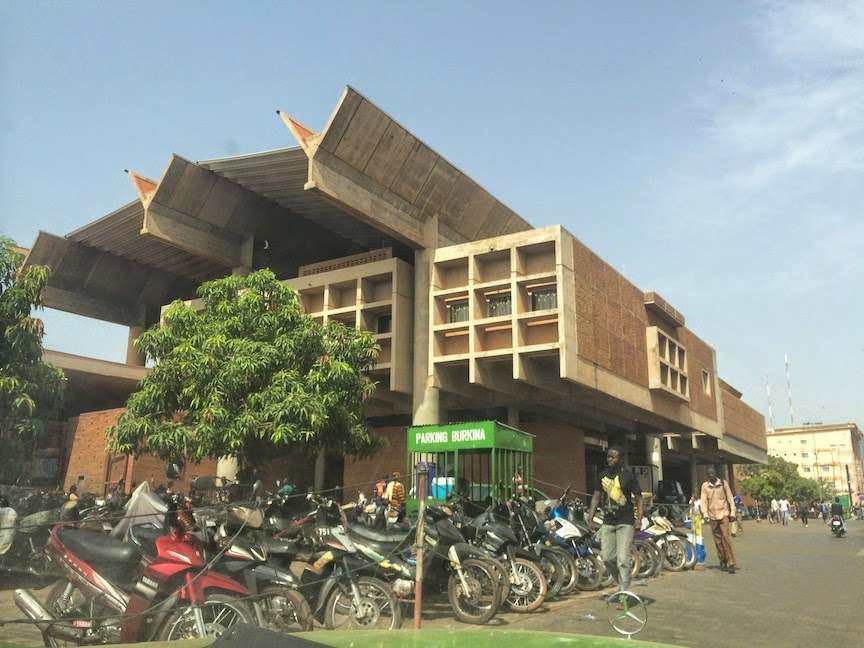 One of the most important civic spaces in Ouagadougou is also one its most contrasting, and therefore all the more astounding. In a city which is characterized by pastel-painted pseudo-mud-brick post-modernism, one of the country's largest buildings is predominated by a magnificent brutalism: in its size, shape and material it appears straight off a state university engineering quad, from the fenestration orders shading tiny square windows, to the rest of the enclosed space articulated in the red brick of a community college library. 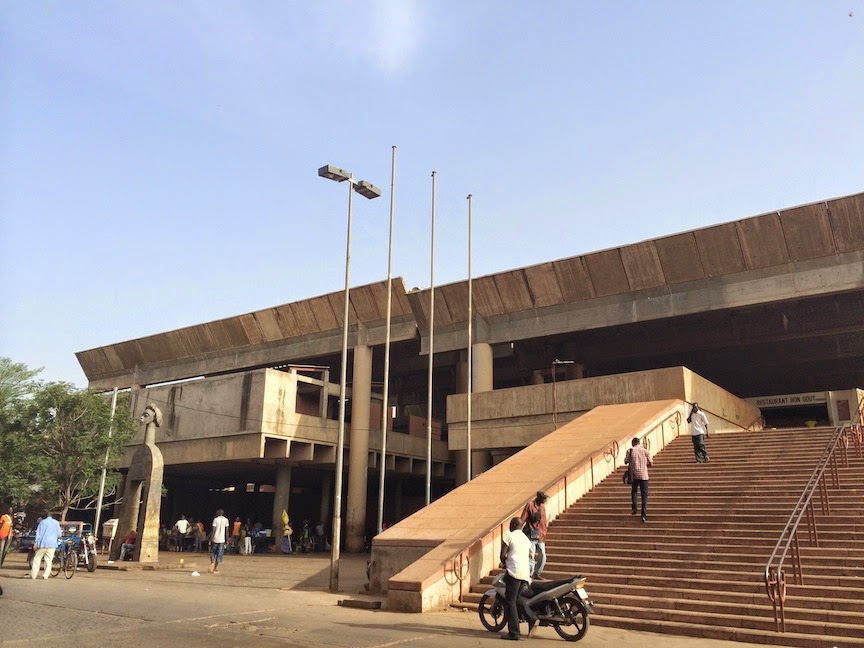 But most the space is not enclosed: the market's true triumph is the soaring girder spans, a section of highway overpass shading an upper-level trading floor, its ceiling height recalling the more inspiring atmospheres of brutal train stations or other civic architecture from other continents, yet with the benefit of the Sahelian climate; there are no walls. 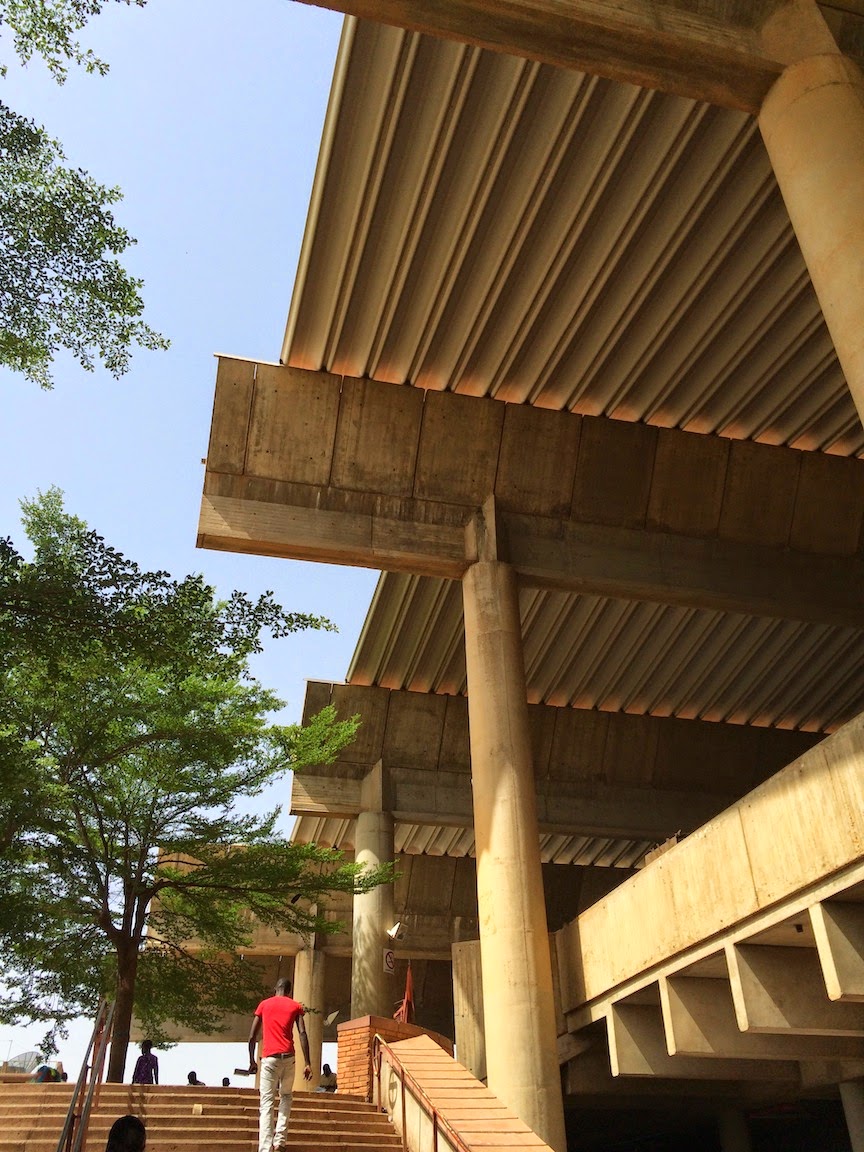 I would have photographed more aspects of the structure but I was constantly mobbed by haggling craft dealers. I am not sure of the age of this building but while it also stylistically looks to be several decades old, it may be a replacement for the older market that suffered a devastating fire in 2003, and so may also be only about ten years old (but could also be the standing site of the fire; not clear). It also not the only brutal civic structure in the city: the main railway station also hoists aloft a soaring slab of concrete, but it was too difficult to try to photograph there. 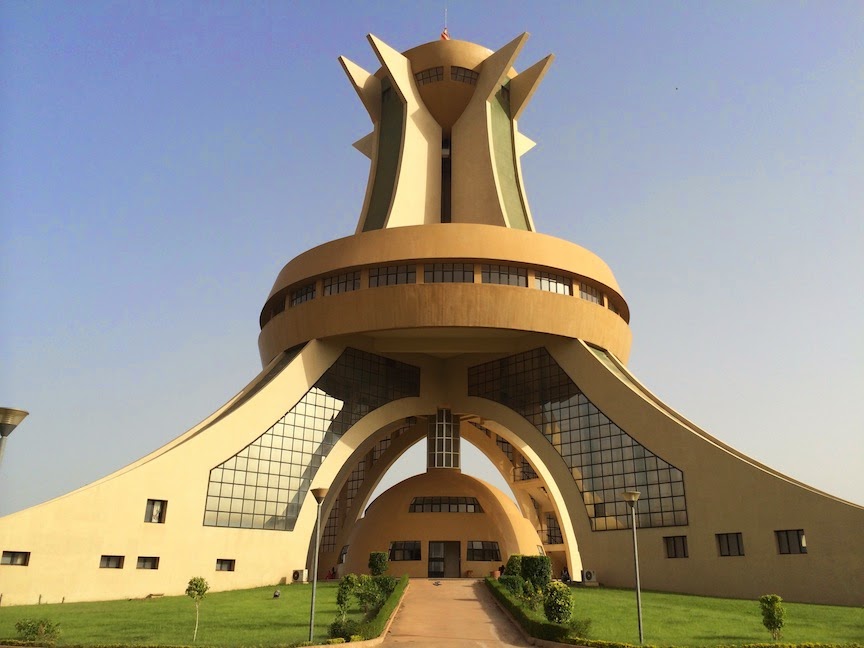 Also known as the Monument to National Heroes, this is surely Burkina Faso's single most bizarre edifice, and for that reason the one that makes listicles like The Most Astonishing Space Age Buildings in Africa!, so it's conceivable that readers will have come across a straight-on shot of this mirrored-glass Eiffel Tower. 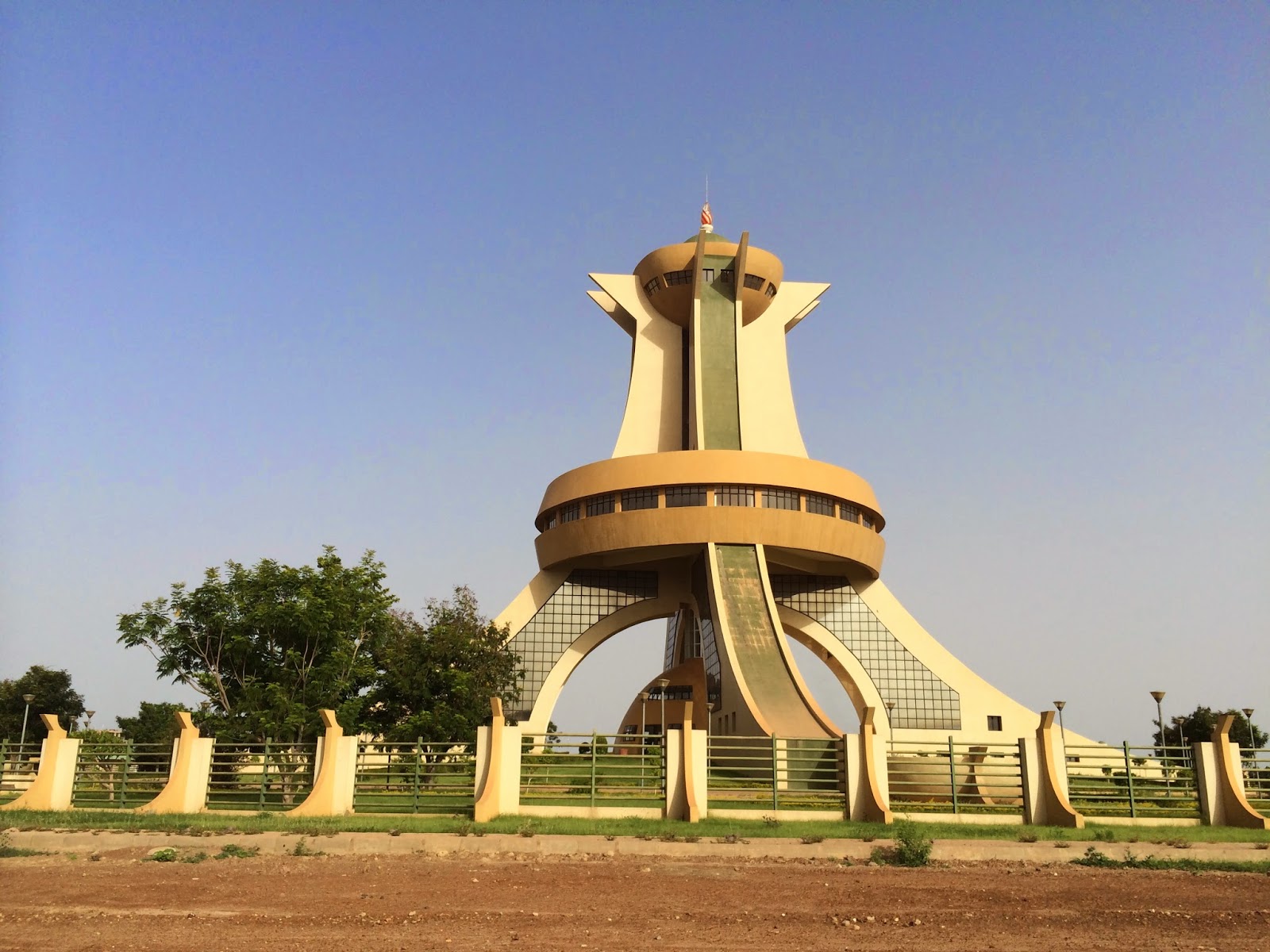 This was the grand-projet of Burkina Faso's president since 1987, not only glorifying the fratricide revolution that brought him to power, but the centerpiece of the brand-new planned quarter of the city that was designed for the turn of the century: Ouaga 2000 [French link], an elite diplomatic and residential area which sprawls in half-deserted, axial grandeur on the southwestern edge of Ouagadougou, like a French-inspired section of Tempe, Arizona. The Monument stands in the middle of a scrubby field, which makes its presence that much more strange and startling. 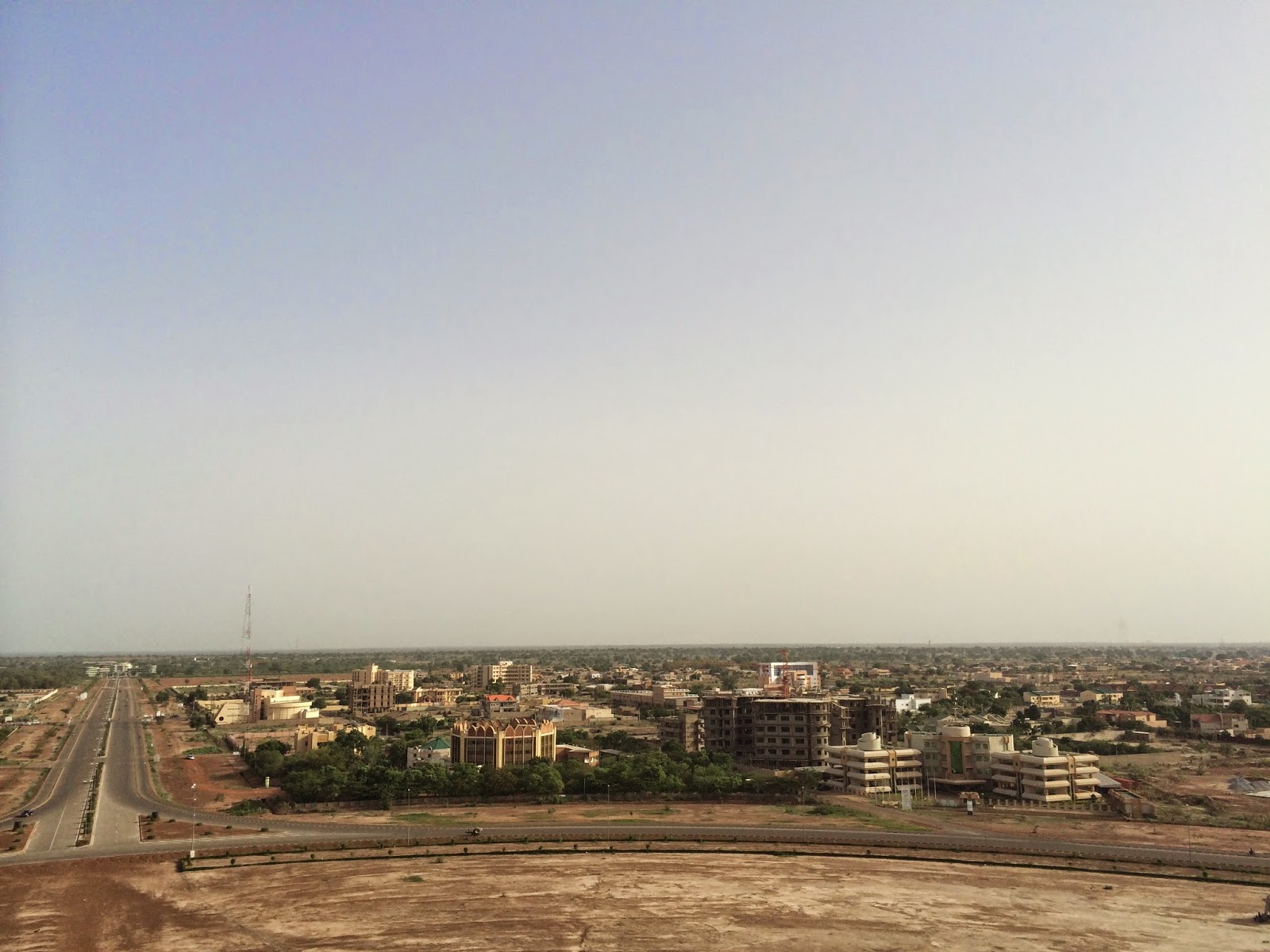 There is no more tired metaphor in architectural criticism as describing an ultra-modern building as looking like an alien spaceship has landed from another galaxy, and yet there is a certain effect of this bombastic quadruped that makes possible to imagine that a rocketship has descended from orbit as much as it looks ready for take-off. 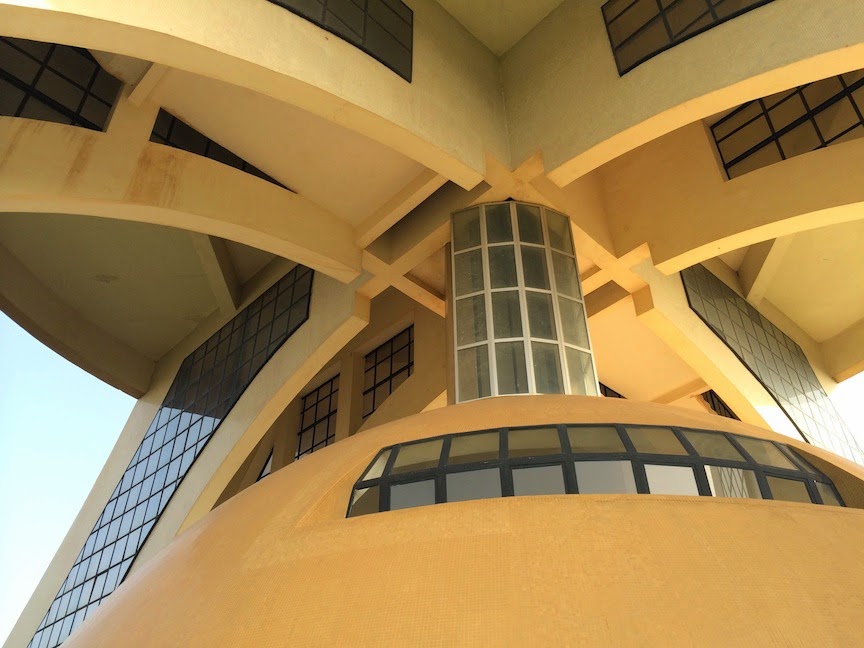 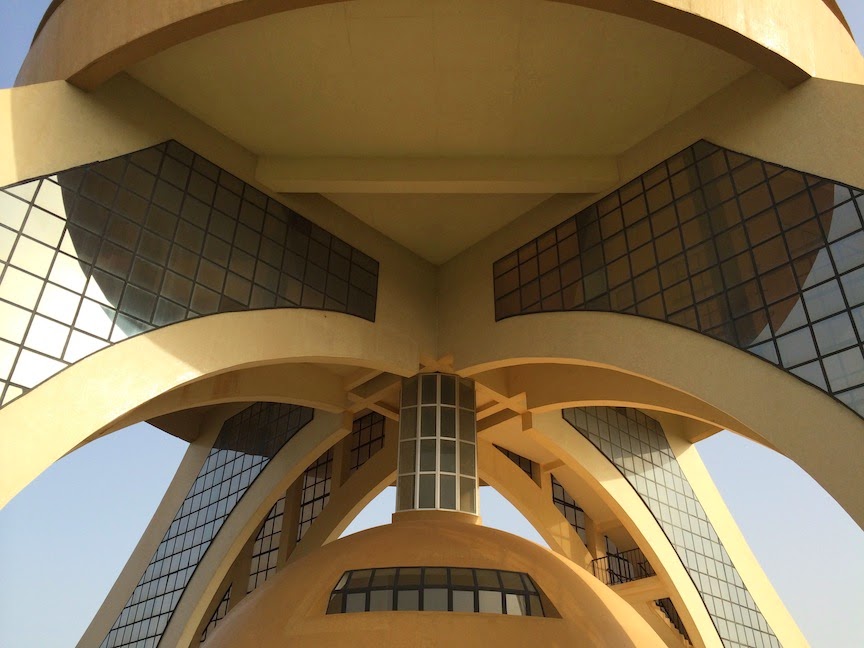 For a third time, what adds to stupefaction is not just the form but the vintage: what is presumed to be a vintage 1983 structure was in fact ground broke in 2002. 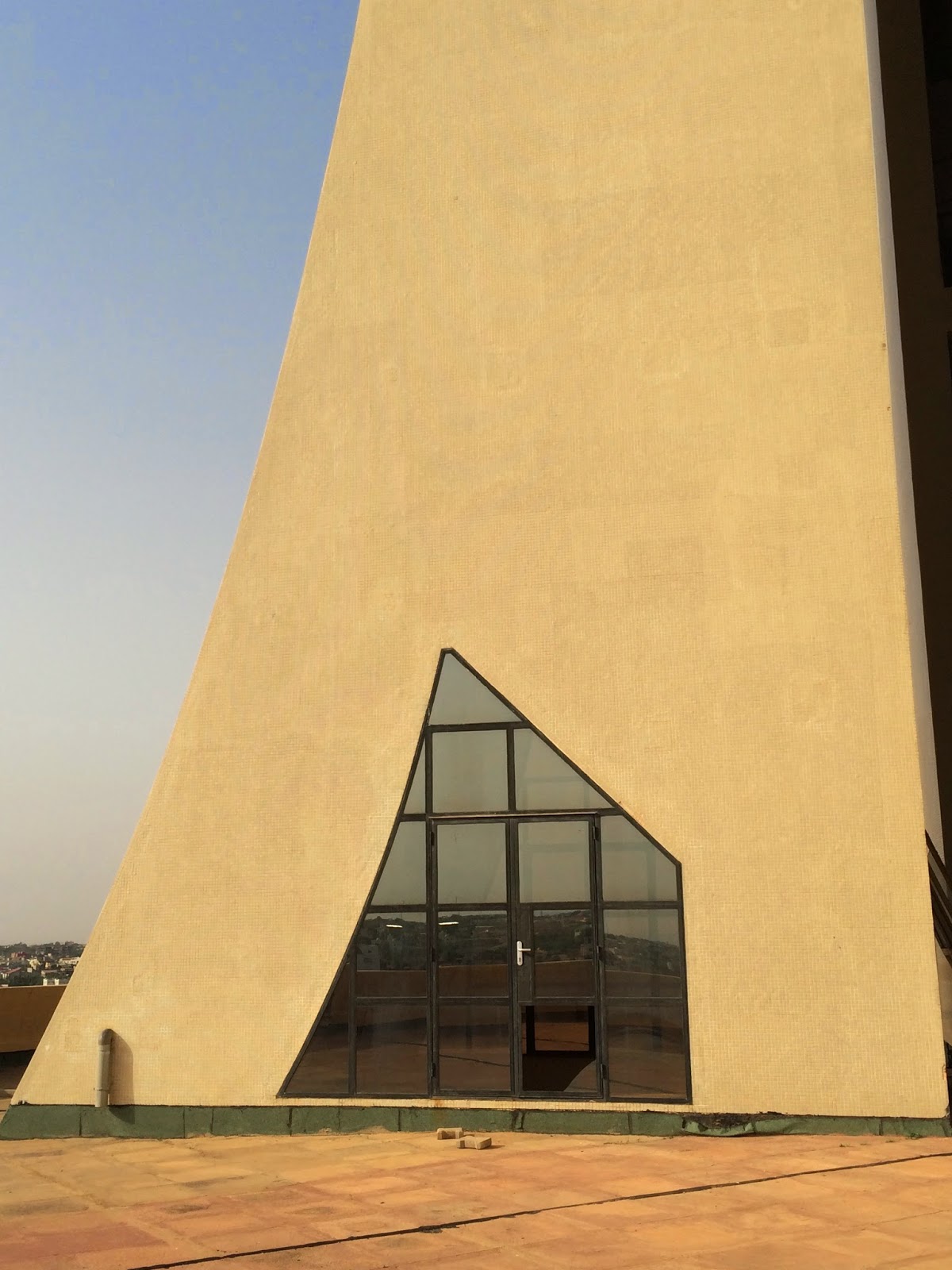 Although still young in building-years, the Monument is hardly ready for take-off, as in typical fashion the elevators are defunct, and a visitor has to endure the stifling, twisting stare wells to reach the observation deck, and finally a regular ladder propped up against a ceiling hatch to reach the bellevue platform. There is an empty museum on the mezzanine level, but other than the old man who pockets $4 to escort you around, the place is deserted. 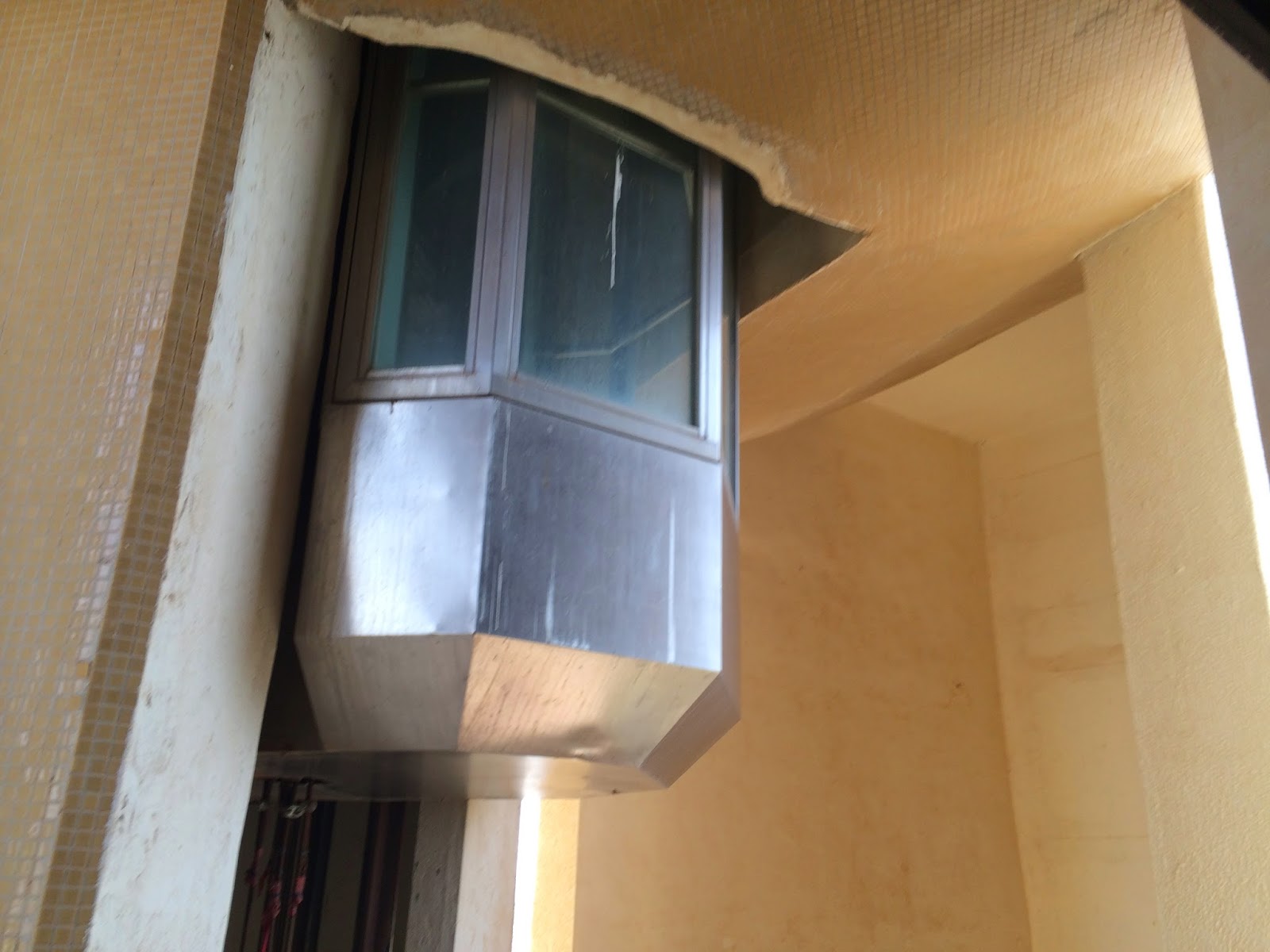 I was delighted by so many details: the plaid-legging effect of all that police-visor glazing, framed in smooth concrete, so akin to the stately slope of the Solow Building on 57th street; the under-side with its pizza-oven half-dome elevator lobby, ready to vacuum earthlings up to the mothership;  the engorged-to-bursting muscularity of the mezzanine level; the sharp flair of the fins on the tower's crown, a gesture like the tail 1958 Chevy Cobalt. 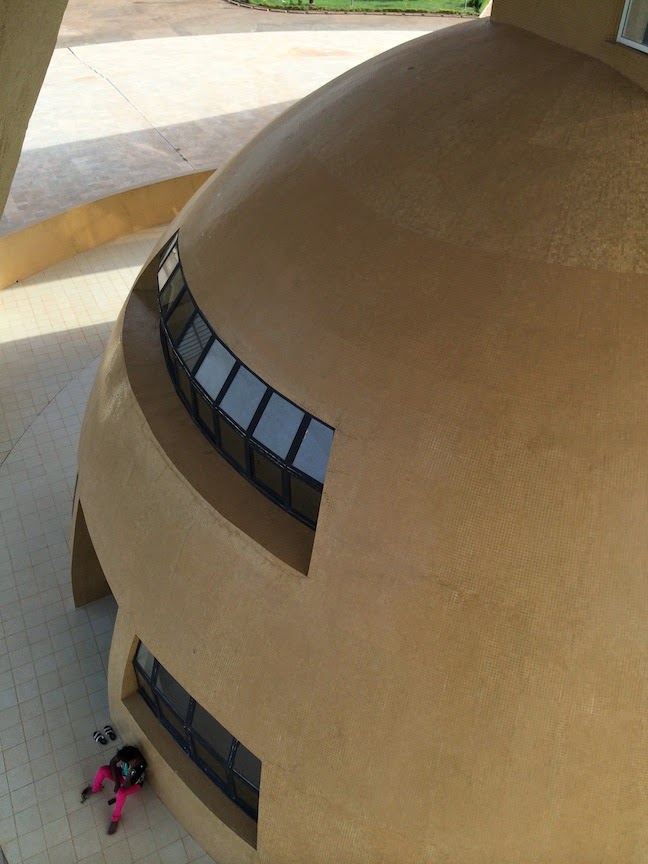 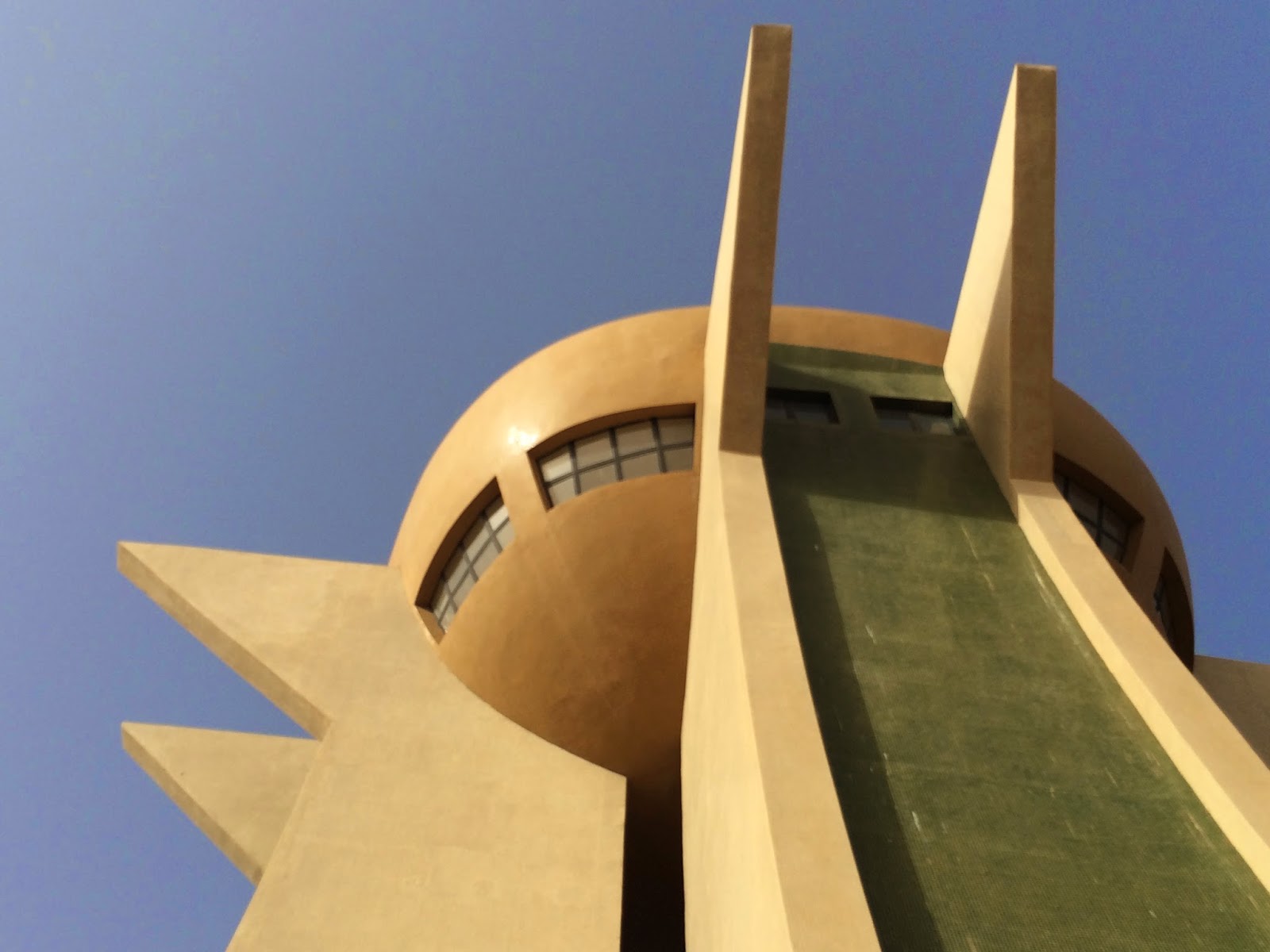 The building is both autocratically menacing and fancifully ridiculous: a cartoonish rendering of an world's fair tower built with the state resources of the world's third-poorest country to celebrate its own achievements. It is in this perspective that it becomes troubling to act merely as a tourist, and be amused or even aghast at the irony; it becomes necessary to reflect on the role of buildings and their architects in the furtherance and solidification of regimes.