Books of the Decade: Austerlitz

Austerlitz was the final work of literature by German author W.G. Sebald. Its English translation was published in 2001, the same year in which Sebald died in an auto accident in England.
Austerlitz recounts a series of coincidental encounters, in Antwerp, London, and Paris over the course of several decades from 1967 to the late 1990s, between a unnamed narrator and a mysterious architectural historian named Austerlitz, an endearing but troubled figure, haunted by his past, and hunting the elusive truth of this own identity. These uncanny meetings, and the fables, anecdotes, history lessons, and stories recounted by Austerlitz, make up the text of the novel and begin to record the man's search for his parents, and for himself.
Without revealing anything more about this staggering achievement of literature, which should be read in its entirely, but to properly celebrate one of the great books of the last decade, I wanted to recount a few passages in the tale in which the architecture of scenes take the foreground. Architecture, and the sense and history of place they create and reveal, are often the very agents which instigate and aide Austerlitz's search for his own past, and are thus very integral to entire work itself. As the story wanders across Europe, from Wales and London to Paris and the Czech Republic, bits of buildings and what they embody jar the memory of Austerlitz, both to what he knows as a scholar and what he has forgotten of himself, and reveal as much about the dark truths of our own civilization and past as that of this single individual.
Sebald was renown for his use of photographs embedded in his text, a technique still unique to published literature but rather prosaic in the world of weblogs. In shielding those who have yet to read Austerlitz with the many pleasures, sorrows and secrets of the work itself, and in honoring the masterpiece in employing its signature format, the selected excerpts below give a sense of Sebald's mastery, and are paired with very contemporary photographs, taken by Flickr users unknown to me, of the places and architecture concerned, which serve also to capture the unique atmosphere of the writing, which recount bits of distant history while the action of Austerlitz's wanderings take place in the contemporary world of a decade ago, which remains accessible and knowable to us.
I. Centraal Station, Antwerp.

When I entered the great hall of the Central Station with its dome arching sixty meters high above it, my first thought, perhaps triggered by my visit to the zoo and the sight of the dromedary, was that this magnificent although then severely dilapidated foyer ought to have cages for lions and leopards let into its marble niches, and aquaria for sharks, octopuses, and crocodiles, just as some zoos, conversely, have little railway trains in which you can, so to speak, travel to the farthest corners of the earth. -p. 6 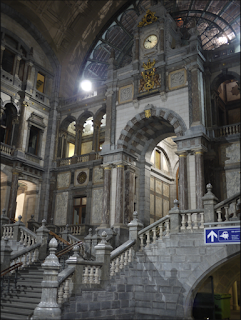 Towards the end of the nineteenth century, Austerlitz began, in reply to my question about the history of the building of Antwerp station, when Belgium, a little patch of yellowish-gray barely visible on the map of the world, spread its sphere of influence to the African continent with its colonial enterprises, when deals of huge proportions were done on the capital markets and raw materials exchanges of Brussels, and the citizens of Belgium, full of boundless optimism, believed that their country, which had been subject so long to foreign rule and was divided and disunited in itself, was about to become a great new economic power -- at that time, now so long ago although it determines our lives to this day, it was the personal wish of King Leopold, under whose auspices such apparently inexorable progress was being made, that the money suddenly and abundantly available should be used to erect public buildings which would bring international renown to this aspiring state. One of the projects thus initiated by the highest authority in the land was the central station of the Flemish metropolis, where we were sitting now, said Austerlitz; designed by Louis Delacenserie, it was inaugurated in the summer of 1905, after ten years of planning and building, in the prescience of the King himself. p.9 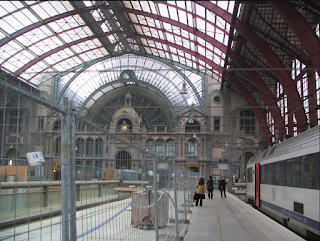 I packed, left the hotel on Kampa Island, and crossed the Charles Bridge, which was wrapped in early mist, walked through the streets of the Old Town, and over the still deserted Wenceslas Square, making my way to the main station on Wisonova which as it turned out, did not correspond in the least to the idea I had formed of it from Vera's narrative. Its Jugendstil architecture, once famous far beyond Prague, had been surrounded, obviously in the 1960s, by ugly glass facades and concrete blocks, and it took me some time to find a way into this forbidding complex over a taxi ramp leading down to the basement story. 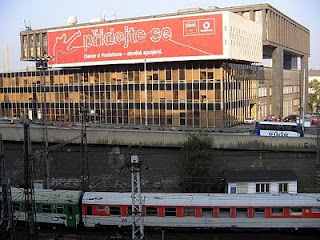 The low-ceilinged hall I now entered was crowded with throngs of people who had spent the night there among piles of luggage, huddled together in groups of various sizes, most of them asleep. A sickening red-hued light immersed the entire apparently boundless encampment in a positively infernal glare as it shone from a slightly raised platform measuring at least ten by twenty meters, on which about a hundred games machines were arranged in several batteries, idling to no purpose and chanting inanely to themselves. I stepped over some of the motionless bodies on the floor, went upstairs and downstairs but failed to find my way through this labyrinthine station, which seemed to concise of nothing but sales booths and stands of kinds. 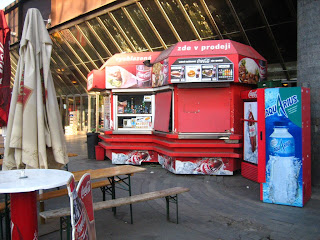 Eventually I asked a uniformed man who came towards me Hvlaní nádráží? Wilsonovo nádráží? whereupon he took me carefully by the sleeve, like a lost child, guided me to a dark recess in a remote corner, and there showed me a memorial plaque saying that the station had been named in 1919 after the freedom-loving American president Wilson. When I had deciphered the memorial and nodded my thanks to the railway official, who had patiently stated beside me, he led me round a few more corners and up several steps to a kind of mezzanine floor, from which I could look up at the mighty dome of the former Wilsonova station, or more accurately at half the dome, since the other half had been sliced away, so to speak, by the new construction towering up into it. --pp. 217-218 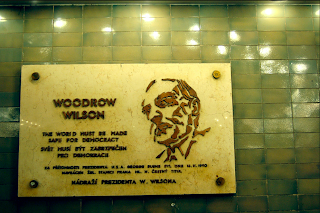 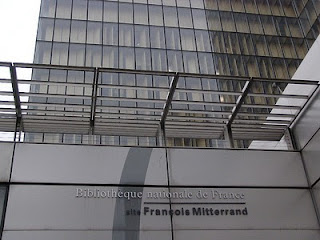 In order to reach the Grande Bibliothèque, you have to travel through a desolate no-man's land in one of those robot driven Métro trains steered by a ghostly voice, or alternatively you have to catch a bus int he place Valhubert and then walk along the wind-swept riverbank towards the hideous, outsize building, the monumental dimensions of which were evidently inspired by the late President's wish to perpetuate his memory whilst, perhaps because it had to serve this purpose, it was so conceived that it is, as I realized on my first visit, said Austerlitz, both in its outer appearance and inner constitution, unwelcoming if not inimical to human beings, and runs counter, in principle, one might say, to the requirements of any true reader. If you approach the new Bibliothèque National from the place Valhubert you find yourself at the foot of a flight of steps which, made out of countless grooved hardwood boards and measuring three hundred by a hundred and fit meters, surrounds the entire complex on the two sides facing the street like the lower story of a ziggurat. 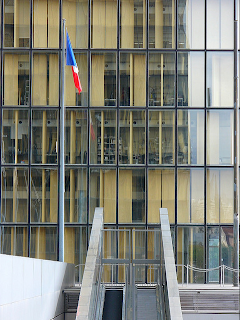 Once you have climbed the steps, at least four dozen in number and as closely set as they are steep, a venture not entirely without its dangers even for younger visitors, said Austerlitz, you are standing on an esplanade, which positively overwhelms the eye, built of the same grooved wood as the steps, and extending over an area about the size of nine football pitches between the four corner towers of the library which thrust their way twenty two floors up into the air. 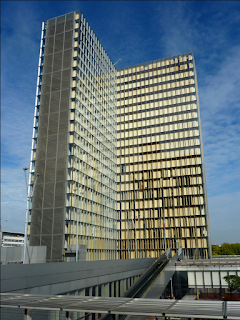 You might think, especially on days when the wind drives rain over this totally exposed platform, as it quite often does, said Austerlitz, that by some mistake you had found your way to the deck of the Berengaria or one of the other oceangoing giants, and you would not be in the least surprised if, to the sound of a waiting foghorn, the horizon of the city of Paris suddenly began rising and falling against the gauge of the towers at the great steamer pounded onward through the mountainous waves, or if one of the tiny figures, having unwisely ventured on deck, were swept over the rail by a gust of wind and carried far out into the wastes of the Atlantic waters. 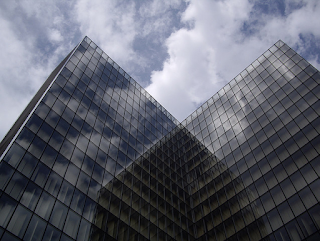 The four glazed towers themselves, named in a manner reminiscent of a futuristic novel La tour des lois, La tour des temps, La tou des nombres and La tour des lettres, make a positively Babylonian impression on anyone who looks up at their façades and wonders about the still largely empty space behind their closed blinds. When I first stood on the promenade deck of the new Bibliothèque Nationale, said Austerlitz, it took me a little while to find the place where the visitor is carried down on a conveyor belt to what appears to be a basement story but, in reality, is the ground floor. This downwards journey, when you have just laboriously ascended to the plateau, struck me as an utter absurdity, something that must have been devised-- I can think of no other explanation, said Austerlitz-- on purpose to instill a sense of insecurity and humiliation in the poor readers, especially as it ends in front of a sliding door of makeshift appearance which had a chain across it on the day of my first visit, and where have to let yourself be searched by a semi-uniformed security men.

Curiously enough, said Austerlitz, a few hours after our last meeting, when he had come back from the Bibliothèque Nationale and changed trains at the gare d'Austerlitz…After that I wandered round the deserted station half dazed, through the labyrinthine underpasses, over footbridges, up flights of steps on one side and down on the other. 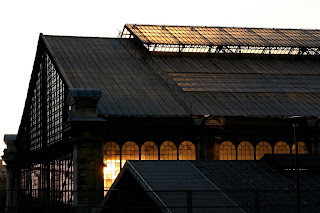 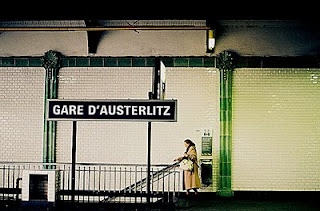 That station, said Austerlitz, has always seemed to me the most mysterious of all the railway terminals in Paris. I spent many hours in it during my student days, and even wrote a kind of memorandum on its layer and history. At the time I was particularly fascinated by the way the Metro trains coming from the Bastille, having crossed the Seine, roll over the iron viaduct into the station's upper story, quite as if the facade were swallowing them up. 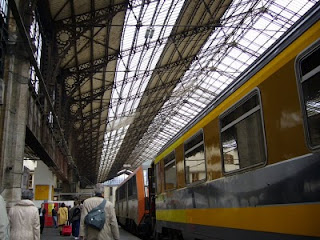