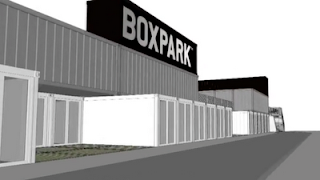 First, watch this, or at least, as much as you can take. Quotes from the video appear in blue in the post below:

Shipping container chic as a particular manifestation of commodity fetishism, specifically the branch of retail expansion known as pop-up stores, is not a new phenomenon. Previously, its most widely-publicized iteration was the 2006 opening of the Freitag retail "flagship" in Zürich, a towering stack of containers in a landlocked country. This and other ancestors are featured in the Boxpark video, so at least the developers are not completely ignorant of all context. Just almost all of it. 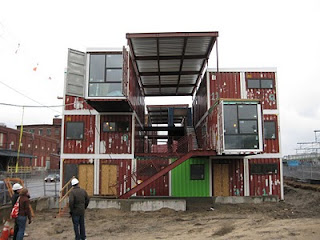 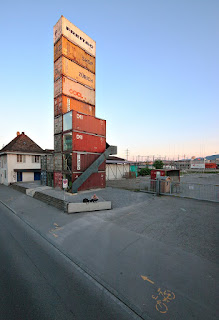 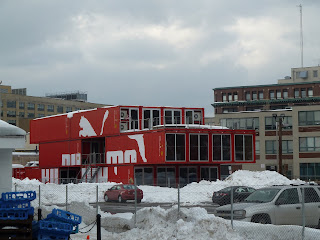 After "popping up" in Alicante, Stockholm, and the Boston Waterfront for the VOLVO ocean race in 2009, the LOT-EK designed PUMA CITY sits abandoned in a vacant lot in the Fenway section of Boston. ©2011 Bauzeitgeist

This announcement of a new Boxpark "pop-up shopping mall" is being praised for its innovation and genius by the developers realizing the project and the boutique apparel retailers who hope to occupy the square footage, as this very long and self-congratulatory promotional video exhibits. It is called riveting, it is called genius, it is repeatedly called innovative.

Aesthetically The container is the ultimate industrial design. Why not use it in a retail perspective. -Roger Wade, Boxpark

Those containers have small retail uses within them so that you have a vibrant immediate new high street market…all packed full of buzzing exciting interesting things. --Andrew Waugh

There are many aspects of this phenomenon worth exploring. Firstly, whether there is anything even remotely "guerrilla" or subversive in the existence or manifestation of this construction is easily dimissed by the developers' and PR consultants' soundbites.

Its not only the world's first popup mall there has never, ever been a situation where containers Multiple containers have been put together on a temporary site to form a more anywhere throughout the world. --Roger Wade

Secondly, whether it is at all contextual or respectful of its immediate surroundings, (and completely aloof of the larger political and economic context of Great Britain at this moment of Big Society austerity), as the entire project is unashamedly co-opting the perceived cool of Shoreditch, and is just as ready to abandon the area and relocate whenever gross receipts flag, and its fickle, moneyed hipster target demographic decides to ditch Shoreditch a newer neighborhood.

What I kind of love about it is that this is almost like Shoreditch's version of your kind of 2011 shopping mall.--Mark Herman, PR/Marketing Consultant

The concept of the container allows brands like ours to create space to get our DNA across-- Paul Young, Natural Selection.

This seems very apropos of this particular moment in London, in which the city's elite continue celebrating themselves like its 2007, but warn that if they are too inconvenienced, they can just as well relocate to a more favorable political and tax milieu. The city itself, and its less-affluent inhabitants, are fixed to their location, to their potential misfortune.

Box Park is going to be home for independent brands. It can't be about the high street. If you get that brand mix right, and focus on that most important thing, the brands, the customer will come. --Roger Wade

Thirdly, its tempting to consider if this is all that the genius and effort of Japanese Metabolism can claim as its descendant at this point in our civilization. But aside from these and other important considerations of the project's purpose and objectives, Boxpark and its backers appear to be completely aloof of the existence elsewhere on the planet of repurposing shipping containers for habitable and occupied spaces, retail or otherwise. This too, seems to be a tale of our times.

The main street in Monrovia, Liberia. Despite the grainy quality, half a dozen repurposed shipping containers, converted to stores, can be seen on the roadside. Video courtesy YouTube user Billmoses01.

Empty shipping containers are ubiquitous in Africa, due in part to large trade imbalances in which consumer and manufactured goods are imported from overseas. This circumstance makes empty shipping containers readily available in prices that are in reach of lots of African small business owners: it often costs more to rent a flatbed truck to move a container than the cost of purchasing the container itself.

Its going to be an eclectic mix… fashion casual brands, footwear…any retailers that we think are going something just a little bit different. --Roger Wade 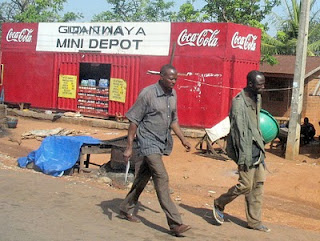 Shipping containers can be quickly modified, to varying degrees of exactitude depending on the machinery available. Its not difficult to fix openings for doors and windows. Other apertures for plumbing, electricity and air conditioning are less common but still only limited by budget. They further appeal in that they are much more difficult than traditional wood and fiber constructions to siege or enter by force, meaning they are more secure storage for commercial goods, or human habitation.

So the way that this design process will work is that we get the containers, the take the containers to our depot and then shop fit, the tailoring of each one of those interiors will take place… Fit out these relatively small spaces, beautifully tailored, each one of them for their use. --Andrew Waugh

Generally, they are ill-suited for human occupation, in their windowless form and material: in the tropical sun the metal interior becomes unforgivingly hot, which leads many Africans to construct a separate roof system to shield from the sun.

Why does a store out of a container work? When you open the doors of a container you've got a box. A box is like any structure: the box is waterproof, the box can be insulated; electricity can be supplied. You know the beauty about this is? We can also move it. -Roger Wade 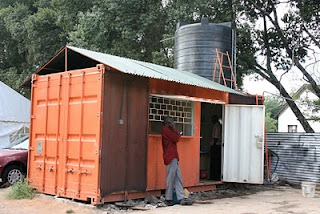 Nonetheless, African shipping container businesses are structures not of ironic expression but of desperate necessity. They are one of the most common forms of building to be found in rural and peri-urban African cities for commercial businesses. There is nothing remarkable about this in the African cityscape. This were people buy their water, their eggs, their mobile phone scratchcards. They are businesses, restaurants, schools, clinics, libraries. They are shelter, they are homes. 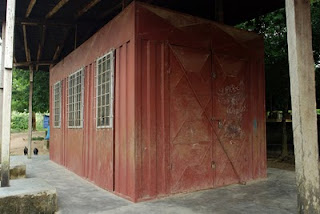 It is unique in that it offers arguably the most cost efficient and flexible way for new entrants to gain exposure to the retail market. I think its also unique in that the whole concept is being run by a retailer than your usual archetypal absentee landlord. That will make a big difference.-Mark Phillipson

Given that these informal, family-run business often occupy roadside real estate which is frequently not legally secured by the business owner, these businesses are under constant threat of being pushed off their land by government officials or others. These solid metal structures offer more protection from the machetes and bulldozers of "slum-clearance" than a hut made of woven mat or even a structure made of concrete blocks, but can still be taken away. Thus, they are true "guerrilla" pop-up stores.

I think the idea of a recycled shipping container is a really good one. The fact that it is kind of a space that is constantly changing I think will be appealing. I think people now …Fashion is very very fast, they want to see things that are new, they want to go to places that are changing and evolving. And I think that its an opportunity to create a piece of theater. Its certainly something we want to be a part of. -- Timothy Everest MBE, Designer Tailor

To be clear, Boxpark is not claiming to be a completely original idea either in "recycling" shipping containers or in using them for pop-up retail. Boxpark is arrogant and co-opting of many things, but it neither hijacks nor exploits African retailers opportunities or ideas. Boxpark does nothing of the sort. They exhibit no awareness of reused shipping containers in Africa or elsewhere in the developing world. They evince no knowledge of these small businesses and the people who try to operate them. They exist in a completely different world, and they're just thrilled with themselves.

Then we are going to consider other locations, both nationally and internationally. --Roger Wade