Mark Bradford at the ICA 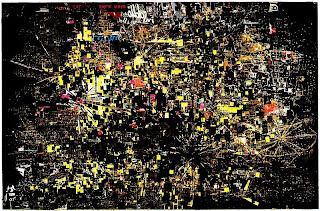 There is still more than a month remaining to view the Mark Bradford retrospective at the Institute of Contemporary Art in Boston. Los Angeles-based Bradford's subject is the American city and urban society, and his huge, mixed-media canvases reference maps and cartography--he even reports using Google Earth as a starting point for his pieces. 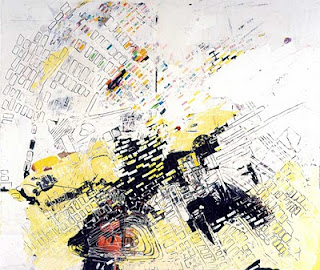 His most renown works explicitly evoke city blocks, neighborhoods, and inner city territories of racial and class conflict. One of his most powerful works, Scorched Earth, 2006, with its tortured territories of blood red and charred black, recalls the 1921 race riots of Tulsa, Oklahoma with a distressed map of that city with its racial divisions, which became a battleground. Bradford has experienced the chaos of riots first-hand in his native Los Angeles, and many of his immense, warped yet neatly segregated collages appear to have survived trauma and assault--especially up-close. 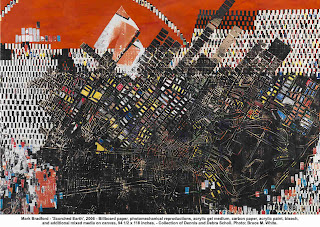 Made of found materials, the works are painfully distressed by Bradford's processes, which involve both detailed assembly and unforgiving destruction (he wears away at his agglomerations with an industrial sander). As elevations, his work directly imitates the forlorn urban streetscapes plastered with wilted, faded signage and partially-identifiable billboard advertising-- themselves the very ingredients of his assemblage--but as plans the works devastatingly evoke the disordered, interrupted and segregated topographies of America's urban centers. Overlapping raditations streets-like and block-like, suggest the disunity and discordance of America's urban spaces, and the explosions of violence that occur within them. 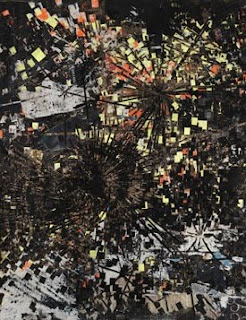 "Its about…tracing the ghost of cities past. Its the pulling off of a layer and finding another underneath" -- Mark Bradford 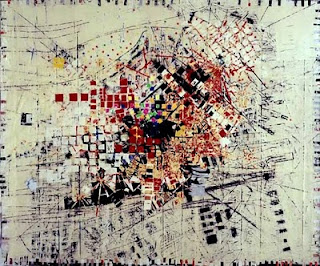