Among the landmarks of London whose appearance from afar is considered precious, the Palace of Westminster, positioned particularly on a broad curve of the River Thames, is among the most sacrosanct. The views towards Parliament are protected by an act of Parliament.


It is therefore strange that either side of this critical, historic stretch of London's brown artery stretches an increasingly incongruous phalanx of large, tall buildings. 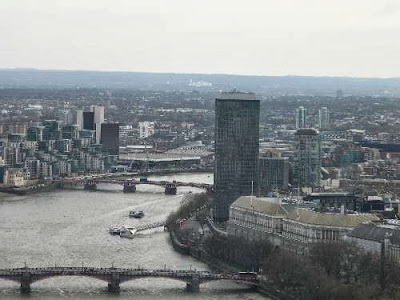 Partly, this is a result of the property and preservation paradox itself: water views are always valuable, and the wide vistas across the water, itself mostly free of buildings, make its edge a prime location for prominent buildings, beginning with Big Ben itself.

But, like in so many other rarified quarters of the capital, when post-war Britain needed to rebuild, and as later decades came, architectural statements needed to be made, bold new buildings of varying merit rose up on either side of the river.

It all started out rather well when peace came more than half a century ago: not least the brutalist Festival Hall, which is often considered one of London's best 20th century buildings, and deserves its own consideration aside from this overview. But perhaps this lovely, brave civic endeavor opened a pandora's box of contemporary construction, an outflow which is accelerating even now, all around it. 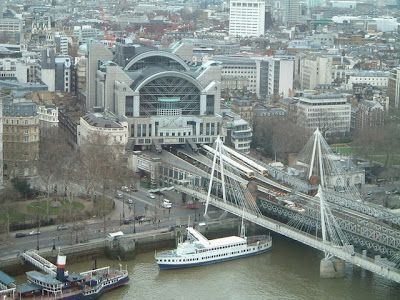 Directly opposite is exhibit A: Charing Cross, Terry Ferrell's high-pomo shopping shed train station, welded to the back of the dainty Victorian railway hotel, a monument to late Thatcherist love of American commercial argot in all things, especially civic infrastructure. 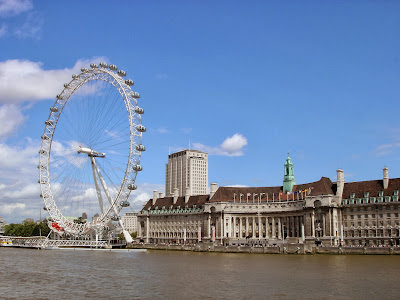 Since the Millennium, the mid-century leisure attraction has been overshadowed in all senses by the London Eye, which itself has become a jewel in the crown of London's indisputable architectural icons. It's nice, and playful, and neat, and family-friendly, and touristic, but it's not in the least respectful of its context, usurping the stately sweeps of parliament for its own ticket receipts. 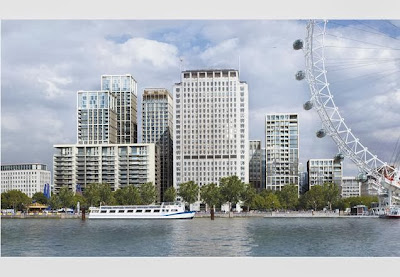 South Bank, in the very near future.

Of an earlier era, and what seems now almost quaintly more controversial at the time, was the Shell Centre, a stone-white office tower lovingly celebrated in this contemporary film below, when riding in elevators and working more than three stories above the ground was a marvel. It will soon by joined by more high-end speculative developments.

Among the oldest skyscrapers along the Westminster side of the Thames is the bulky Millbank Tower, built in 1973 near the site of the old Millbank Prison. Standing like a third tower of parliament, after Big Ben's Clock Tower and Victoria Tower, it is hard to photograph Britain's legislative house without this drab block in the background. It was once a home to Britain's Labour Party, somehow fittingly. 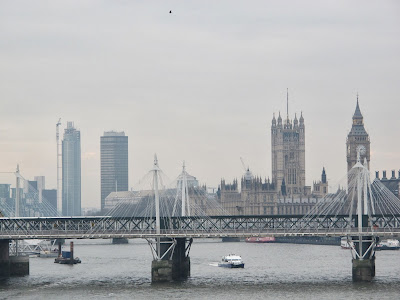 This monolith is now joined by the "riverside stunning development"of St. Georges Wharf, a green-glass Vancouver-upon-Vauxhall that manages to become increasingly obnoxious as it slowly metasticizes decade after decade. 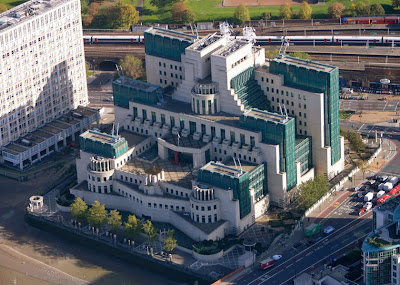 The first mega-structure of the Lambeth shore was Terry Ferrel's second superstructure facing the mid-Thames. Known variously as the MI6 Building or SIS Building, it was built on spec until Thatcher let the spooks lease some floors. Aside from having its naming-rights occupants be a government agency whose existence wasn't acknowledged for decades afterwards, the building's realization is unbelievable in two aspects: firstly that a faux-copper-capped neo-art-deco ziggurat would be proposed anywhere, and that a government's clandestine intelligence division would occupy a bombastic Babylonian building on such a premiere site, a Legoland Lubyanka in Lambeth done up in Michael Graves Mesopotamian. It was famous even before it featured memorably in the otherwise forgettable 2012 James Bond episode Skyfall. The secret police have a celebrity building. 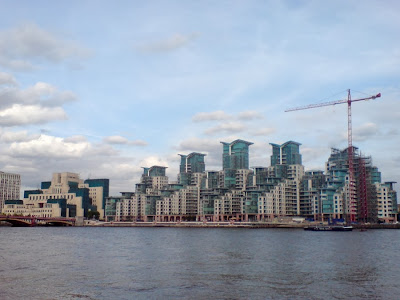 Then its Canadian cousin arrived

What could possibly share space with such a ridiculous building, other than luxury flats? A decade after the secret government agency openly moved in to its bankside behemoth, a vapid, Vancouverish, over-fenstrated fortresses. Nominated for a Carbuncle Cup on completion in 2006, it goes to show how much bad architecture is produced every year that this shiny flock of seagulls lost to an even worse building. That this bizarre pair are in and of themselves unquestionably referential just illustrates how warped the contextual parameters of the Thames have become. London wasn't first to the finish line, yet it now enjoys a quintessential 'stunning riverside development.'


The royal heir did not arrive until 2013. It is again glassy and green, but instead of a sprawling palace, it is a tower. It's realization in this once-distant corner of the city is emblematic of how, in just a decade, all efforts to hold back skyscrapers from London's skyline and its neighborhoods have been exhausted under the foot-tread of property developments. Together with the 40-year old Millbank tower, they stand like pillars of Hercules, ominously blocking the source of the Thames, triumphant in their fight over what this city will ultimately look like. 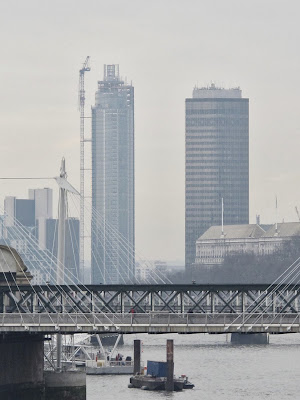 But it is not a war without real-life casualties. In what seemed not only ironically-reminiscent of the kaboom from the Daniel Craig Bond flop, but also an epic allegory for this era of high oligarchy, a helicopter, whizzing across the grey early morning with important people in a rush, struck the tower crane as it was crowning this latest yuppiedrome. Flames and debris not set off by Hollywood effects specialists rained down on the morning joggers and bikers along the river. Two died. A baptism by fire by helicopter crash; buildings have been deemed cursed from far less.

If there's death to be mourned beyond this loss of human life in all this technological violence, perhaps this is yet another eulogy for part of Britain itself? For in all the hand-wringing about view corridors, what is meant to be preserved, what is wished distilled, is the concept of a country, a place not of property speculation but pastural charm, even in its great, grand capital. Of late, this heritage has extended to the honoring the technological past, the age of engineering which gave Britain its summiting might, and so much of its great architecture. 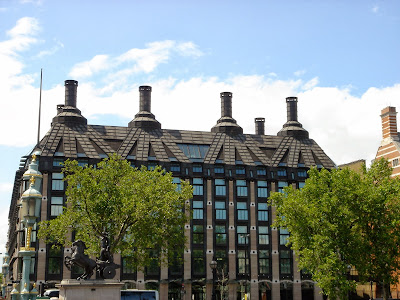 That this would be the alluding myth of an office building for lobbying speaks to the sorry condition of both building design and its society. Michael Hopkin's addition to the Parliament promenade, Portcullis House is not even necessarily a bad building, and it is certainly not the worst that one's eyes could meet, scanning the skyline from the panoramic viewpoint of the river's shores. But neither is it great, for such a great and celebrated spot; it's a minor player in an orchestra, drowned out by bigger instruments, which play an incongruous tune. If that song were a paean, what myths would it lyricize, for us to believe that the river passes by heroes, as it winds through this capital and out to the sea.
Posted by MM Jones at 5:41 PM