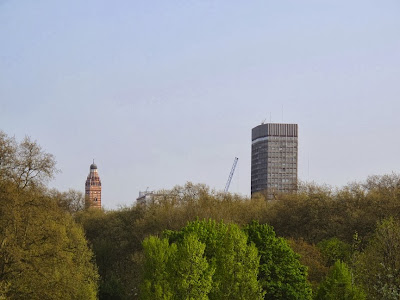 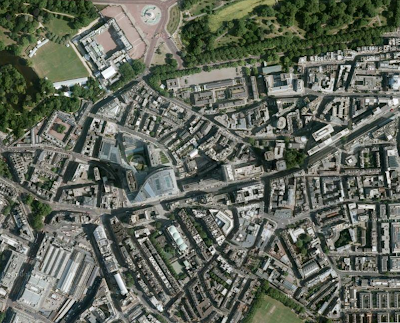 The increasing hideousness of the City of London's skyline is frequently decried just for the ugliness of the new architecture itself, but the loss of the capital's historic vistas, mentioned in terms of the now-carefully-studied "view corridors"–of St. Paul's in particular but also the Houses of Parliament in Westminster. The new glass-and-steel financial towers block the distant appearance of the cathedral's dome or the heroic Big Ben and Victoria Tower of Parliament. Paradoxically, the concern over these sight lines seem to overshadow the demerits of the new skyscrapers themselves, which it seems can be hideous as long as they are a referential distance  from London's more ancient landmarks.

A counterargument to this is that it ignores all the terrible office buildings that have been rising in prominent locations across London for decades. As mentioned in the last post, this is a different issue in leafier west London, away from the narrow jagged alleys of the medieval City. These more residential areas have had fewer demands for tall buildings, more restrictions on new construction, and are home to two of the capital's largest parks, the perimeters of which space out a handful of tall towers, most of which were realized decades ago. 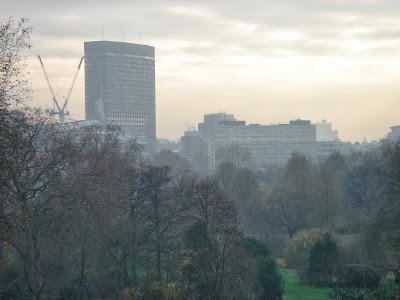 The West London district that most closely resembles the City of London is Victoria. Before ever visiting Britain, I heard the name, and assumed that only one of London's nicest areas would be named after a queen. But this is not the case. The grandeur evoked by its moniker seems grossly misapplied to the tangle of busy, dirty streets, in misnomers like the busy Buckingham Palace Road. 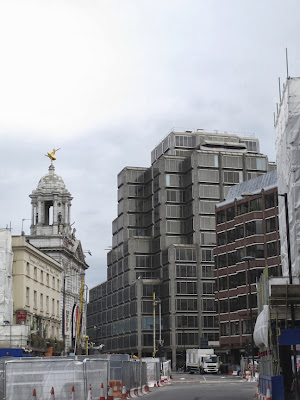 Victoria is sort of the District of Columbia of London, with a heavy dose of Madison Square Garden at its center. Home to a large portion of the British government, it features several busy thoroughfares lined with dull office blocks, home to a lot of the back-office bureaucracy and the UK lobbying industry. This sad zone stretches between Parliament and Buckingham Palace, forming a triangle with its namesake, the enormous Victoria Railway Station, an ugly procession of dusty sheds, which somehow managed to become even more revolting by a partial conversion to a low-ceilinged shopping mall, which itself continues on to a massive bus terminal, its steel frames covered in several decades worth of dust and pigeon poop. An analytical post could be dedicated to just this low-lying carbuncle itself, oozing across the southern threshold of one of the world's most expensive neighborhoods, minutes from bedrooms which go for a million-and-a-half pounds each, and a 15-minute walk from one of the most famous houses on the planet. 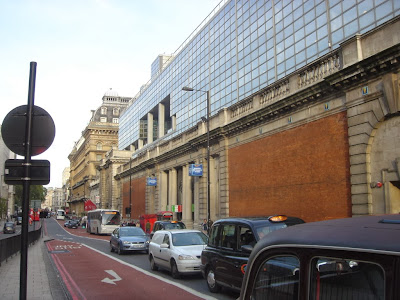 The other side of this district hosts a handful of half-tall, boring office towers. What is most shocking to a visitor's sensibility is that this cluster of buildings, a sort of office park right in the center of Westminster, is within a few blocks of one of the greatest monuments of modern monarchical mythology, Buckingham Palace. The group of dull blocks spoil the background of the pristine royal fantasy, Green Park gets the backdrop of a suburban office park. 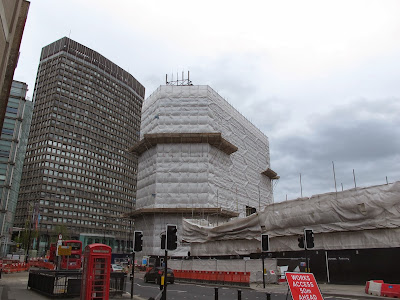 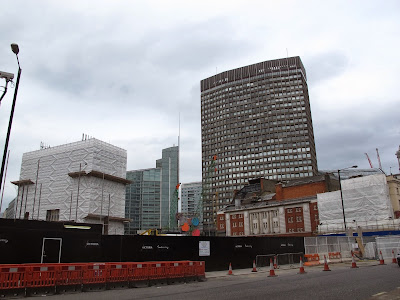 The most noticeable building to rise over the treetops of Green Park is Portland House, a building so bland it is hard to pick it out of a lineup. As if the area between the regal Mall and the train station wasn't turning out badly enough, somehow a shortened Pan Am building (with nearly identical octagon shape and depressing ground floor porticos) dropped down like a lead curtain; the Monster that ate the Green Park. In a classic Maupassantian moment, the property company boasts of the tower's "stunning views" while Portland House prominently detracts so many others from elsewhere in the city. 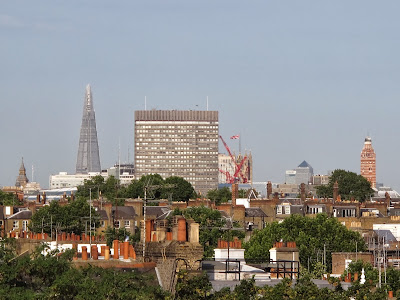 In a quintessential New-Ruins-of-Great-Britain move, the forecourt was done over ten years ago as a glass-domed mall, so the cubicles full of bureaucrats could have their basement gym and food court and shopping. The fourth floor is leased out to the Kazakh resource group that is currently taking over disgraced commodities firm ENRC. 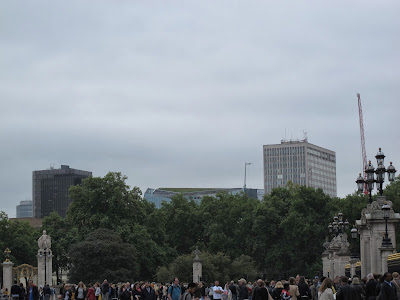 The front of Buckingham Palace, with Cardinal Place and Victoria in the background.
©2013 Bauzeitgeist.

If anything could ruin the scene from Buckingham Palace more than this, it would have to be the erstwhile Home Office, now the Ministry of Justice, which today, like all soulless structures, is most commonly referred to only by its street address, 102 Petty France. Perhaps only in England could such an enormous and over-bearing structure somehow end up referred by such a cute little name as Petty France, as if the façade's fenestration referenced a particular style of lace doily rather than a Brutalist blockbuster. 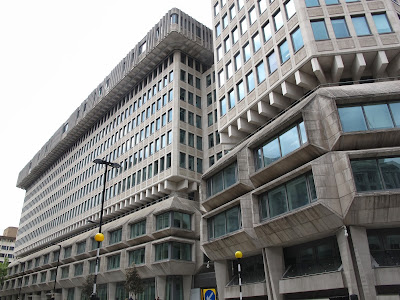 This is another realization of Sir Basil Spence, designer of the Household Calvary Barracks covered in the last post. Celebrated another of the most hated buildings in Britain, it caused a Lord to once remark that Spence ruined two London parks with his monstrosities: the Household Calvary wrecked the bucolic idyll of Hyde Park, while the Home Office destroyed the serenity of Green Park (Portland Place aside). 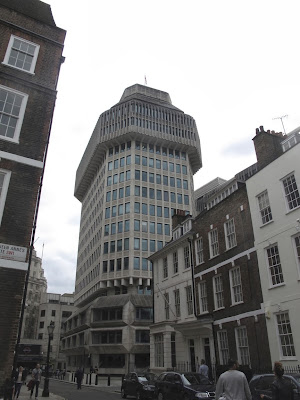 Whether to instills admiration, or admonishment, its mass make one of the most compelling attractions of the whole quarter, another helmeted, cement-paneled soldier rudely wrecking a precious royal vista. Its block-long body features  a double-row of giant goggled bay window galleries staring wide-eyed at the street, monitoring. The higher stacks feature more repetitive windows, its bulbous noggin blotting out even more light. This bureaucratic fortress remarkably resembles the J. Edgar Hoover Building, the FBI Headquarters in Washington, DC, and is therefore all the more fitting that the building's apparent nickname was Lubyanka, after the enormous palace headquarters of the KGB in Moscow. 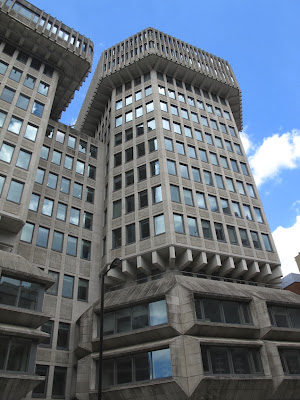 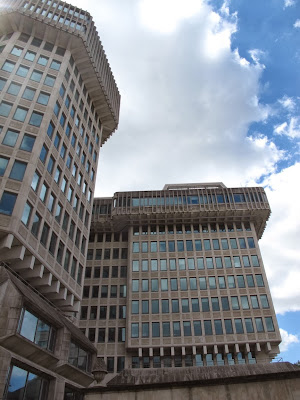 Its tempting to conclude that this repulsiveness was somehow intentional, that the bloated absurdity of this building, while a fitting home to a bloated agency of bureaucracy, was in fact impugning the ridiculously over-large imperial manor sitting just a short walk away–that the narrow lane of Petty France was the closest that Spence could get to stage his protest.