Hyde Park sits just a few miles west of the increasingly carbuncled crown of the City of London. While City's medieval streets burst with more and larger office towers, to the west lies the pastorial idyll, London's leaf Elysian field.

It's surrounded mostly by mannered quarters arranged in terrace rows powder-white town-homes. Protected by legal restrictions, the rooflines of Belgravia, Mayfair, and Kensington cannot be altered. In contrast to the spider-limbed tower cranes frenetically assembling steel plate skeletons over the City, the skyrocketing change to Westminster's property is in its value, not its outward appearance. 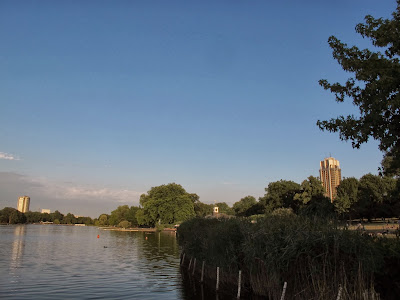 However, Hyde Park is not without its highrises. Before the era of sight lines making headlines and nicknames for buildings, London was a postwar city in need of reconstruction with fewer rules on shadow-casting, including in these aristocratic arrondissments. 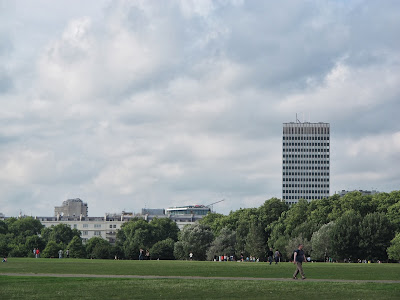 The gimmicky shapes and narcissism of east London's thicket of office blocks contrast the blander 1960-70 era towers across West London. 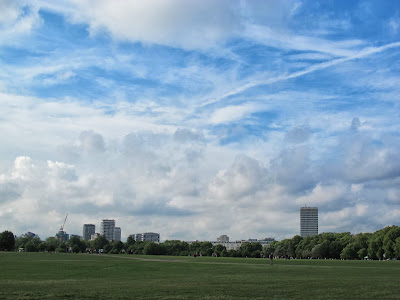 The skyline of Bayswater, on the north side of the Park, from Marble Arch to Queensway, is a semmingly-intentionally dull assembly of rectangles. 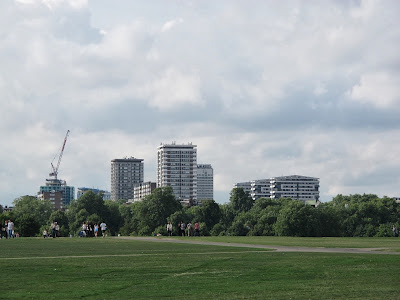 The Queen of the west London chess set might have to be the 1963 Hilton Hotel on Park Lane, a glass-and-cement tripod standing atop a rectangular base at the end of Curzon Street. It should also be the Queen of this game board because the real Queen reportedly hates it and has never gone there in its fifty years. 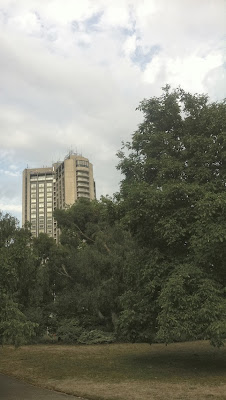 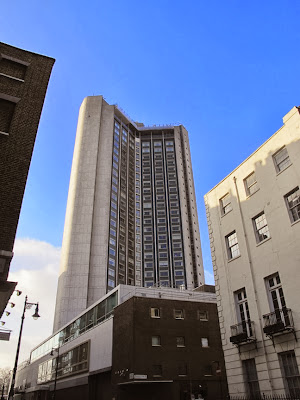 Nearby Knightsbridge, now more than ever a metonym for disgustingly rich plutocrats burning immense amounts of money as a spectator sport, looks low key from the lawn, with only the top levels of the notorious One Hyde Park visible over leaf line. 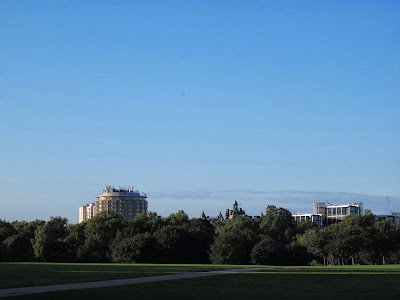 Much more noticeable is the corpulently rotund Sheraton hotel, the robot that ruined Lowndes Square. Its resemblance to R2D2 is enhanced by its brutalist, bug-eyed bay-window pattern. If this wasn't rude enough to its terrace-house neighbors, the base of the building, which houses a casino, looks like a series of temporary partitions to cover the construction of a real lobby. But of course none of the ground-level mess is visible from lovely Hyde Park, where it peaks out above the plane trees, as if on reconnaissance. 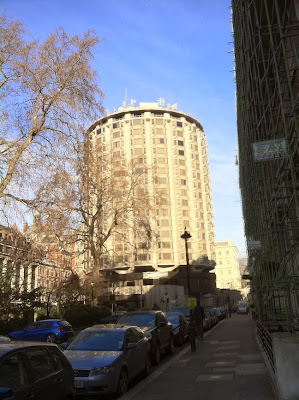 Lastly, the King of Knightsbridge has to be the totally unbelievable Household Calvary Barracks, the tallest and strangest building in West London. Non-Brits might question why household calvary even exist for in the era of the skyscraper, and imagining horse guards in a high-rise on the edge of historic, high-priced homes might require further explanation. 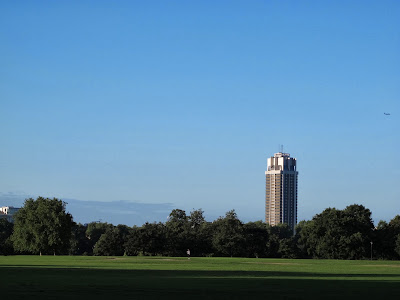 Wedged between the Park and the traffic of the Knightsbridge artery, this vertical dormitory wins the crown for best headgear, as the building's concrete posts flare into a finned helmet, the metallic roof sloping to a slim visor at the roofline, almost recalling the elements of an African Songye mask. 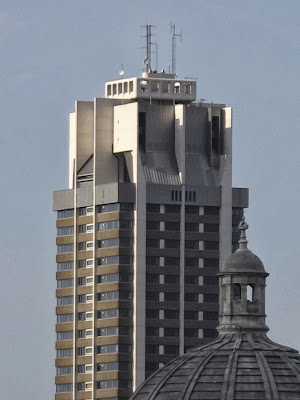 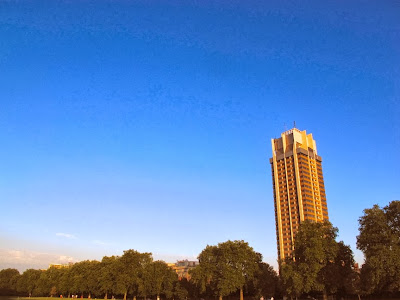 In the current skyscraper boom, there have been repeated lamentations that London's skyline is being ruined. In earlier years, before the City's horizon was blotted out by cartoonish cutouts, the argument that London is not a high-rise city was even asserted.  Like its untouchable acres of terraced houses, London's panoramas and vistas have been treated as delicate, endangered, in need of protection and legislation. This argument convincingly impugns the bombastic buildingscape which continues to grow east of St. Paul's, but conveniently ignores that London has comfortably featured large buildings in its most celebrated areas for half a century or more. 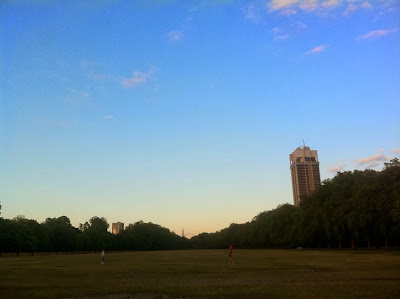 Invasions like the Household Calvary could not get planning permission today, for better or worse. What was allowed to go up all across London in earlier decades, from Tower 42 to Trellik, have been neither widely admired or thoughtfully contextual, and this might be viewed not simply as a series of mistakes but as as possibility of a more realistic metropolis. West London especially, with its few tall buildings spaced around an enormous park, shows how London is treated as a mythical rural village but acts as any other dense city, home to big ugly blocks up against pretty, historic buildings.