Journalists have employed the term "Mainhattan"regularly over the last two decades to describe Frankfurt, ostensibly due its thicket of high-rise financial towers that has risen across the west-end of the city. Frankfurt's American-style "downtown" skyline, began rising in the mid-1970s, never 'exploding' so much as growing bit by bit, as it does today. Frankfurt looked remarkably different from any other European city.

Although somewhat renown in the recent past as the most substantial skyline of continental Europe, this hyperbolic moniker's impact has diminished as European skyscrapers became less unusual, and especially as European skyscrapers have become more common, such as post-1990s Rotterdam or Warsaw, much less when considered against the hundreds of formally-flat cityscapes from Doha to Shenzhen which today appear as a shimmering walls of highrises. 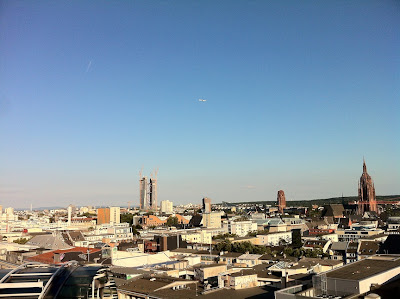 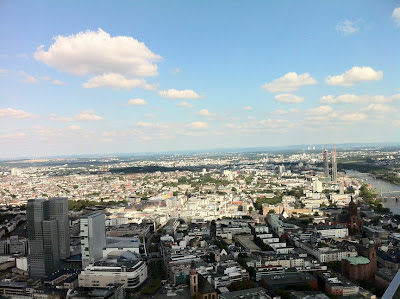 
Not that anyone besides journalists and architectural enthusiasts have ever used the term "Mainhattan," But to at any point call Frankfurt's small cluster of not-particularly-tall buildings a peer to New York's miles-wide skyline was always ridiculously overblown. A more appropriate, if less cosmopolitan, reference would be to a similarly-sized and shaped American city. Frankfurt's skyline was never more substantial or impressive than the elevation of downtown Pittsburgh or Nashville. 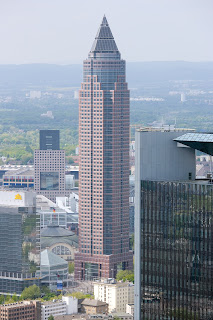 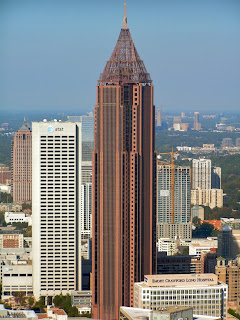 If the comparison should have always been more Mainneapolis than Mainhattan, then at least, in those years, American economic might was still the pinnacle of achievement, worthy of imitation and adoption. Architecturally, this is particularly manifest of that lengthy golden age of post-unification, pre-Euro Germany, when an optimistic Frankfurt embraced corporate American postmodernism as the face of its increasingly intra- and intercontinental financial district.

What had begun as a few German-designed glass boxes pre-1989 was joined by colorful, whimsical bank buildings rising up around the Bahnhofvertiel, of the same generation as the neoclassical office towers that became the tallest buildings in many American cities from Cleveland to Charlotte in the 1990s, as both continents reached the apex of transatlantic corporatism. 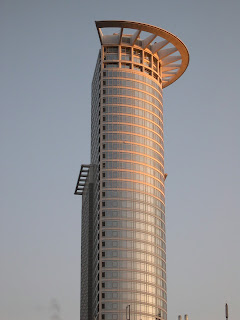 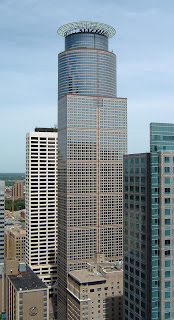 
This resulted in such towers as the pyramid-capped Messeturm, which would not look out of place in Atlanta's midtown; KPF's Westend Tower, whose curving-white brise-soliel was, its hard to comprehend now, seen as daring when it was completed, spawned identical hundreds across the North America from Miami to Vancouver, later spreading to other continents. Yet Westend Tower completed a year after Pei Cobb's US Bancorp in Minneapolis opened in 1992, crowned with a similar fan.

Lastly, and while not copying so closely an particular tropes of American post-modernism, the strangely-crowned Trianon Tower has no closer kin than the Centerpoint Energy Plaza in Houston. 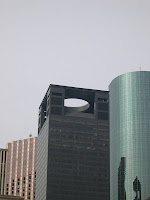 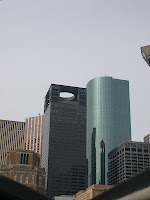 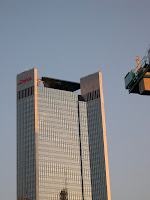 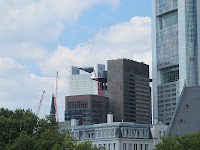 At least a few in Frankfurt seemed to take the city's gothamist nickname somewhat seriously. In looking at the architectural record, this is best supported by the extremely curious Main Plaza, on the south bank of the Main, a hotel tower which seems to directly copy Raymond Hood's 1924 Art Deco American Radiator Building in midtown Manhattan (and Chicago's Tribune Tower), which itself was inspired by gothic architecture: a transatlantic style boomerang; post-modern irony at its pinnacle. 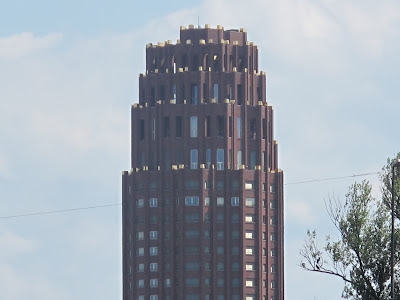 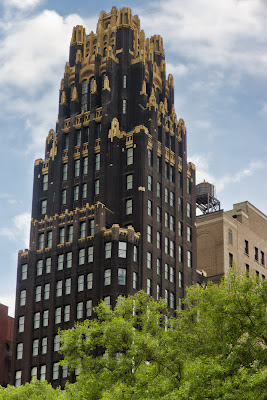 
On a recent visit to Frankfurt, specifically to view the exhibit at the DAM, two prominent additions to Frankfurt skyline show that Frankfurt's skyscraping continues on, but perhaps with new influences and inspirations. In the center of the city, just off the Zeil, the city's wide fußgangerzone, rises the stylish Jumeirah Hotel, the newest outpost of the Dubai-based luxury hotel chain. 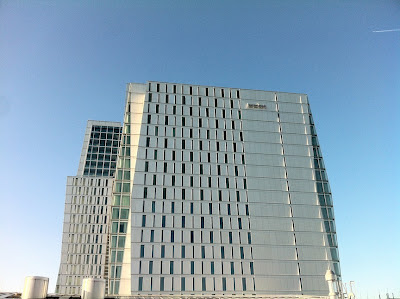 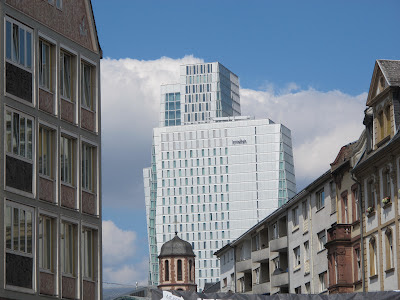 Its highly-contemporary exterior, characterized by jagging and wiggling elevations and punched by stochastic slits of windows, employs two popular devices from the contemporary architecture kit of the last few years, which can be found in the United States as much as anywhere (such as the "curving" and "sexy" Roosevelt University Tower which has invaded Chicago's historic Michigan Avenue district. The Jumeriah takes the same jagged shape, while also being reminiscent of the Hilton Hotel in Houston. 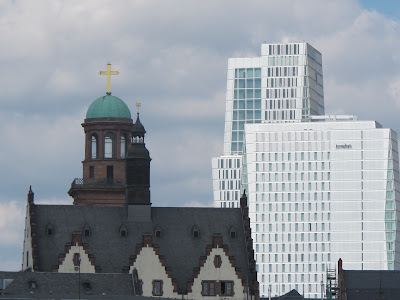 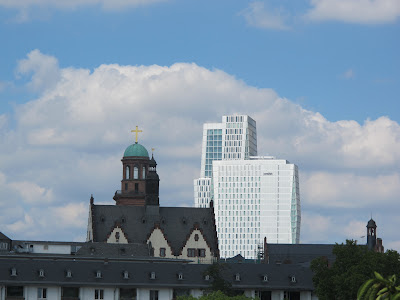 This new developed is adjacent to the historic Thurn und Taxis Palais, but the hotel does not utilize the older building for a substantial street presence or spacious lobby. Instead, a narrow corridor with lectern-sized front desks opens directly onto the ground floor of one the bustling, glittery, mid-market malls which dominate the pedestrian shopping precinct. While linking luxury towers to malls is a standard real estate cocktail around the world, its a formula which is waning in North America at the same time it is worshipped in Arabia, and it seems telling that luxury was conveyed in this particularly non-European fashion. 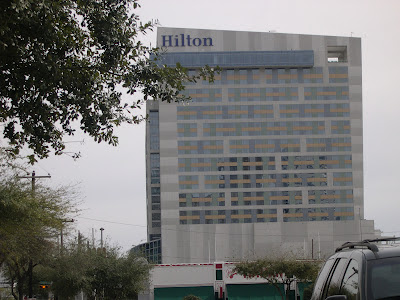 The Jumeirah, part of the  Zeil Hochhaus I & II phase of the Palais Quartiel development, might therefore be best described as a Gulf hotel in a German city, programmatically, stylistically, and architecturally following the bland luxury development formula that is applied in cities everywhere nowadays.

What is therefore more remarkable both in scale and its peripheral location is the substantial European Center Bank Headquarters at the southeastern limit of the city center, at the Großmarkthalle, a vegetable market which also played an ignominious role in assembling deportees from the city during the Holocaust. 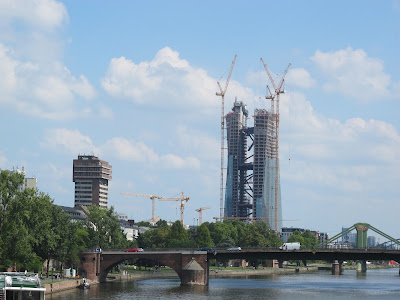 This huge complex rises outside the normally skyscraper-belt, and it is interesting to speculate on the meaning and impact of the ECB's new location, whether this move from the Bahnhofverteil to the Großmarkt marks Frankfurt's shift from its City to its Canary Wharf, especially when viewing central Frankfurt's distant cluster of skyscrapers from the riverfront, docklands-like construction site around the Großmarkthalle. German cities never shielded their centers from development like Paris, but its most skyscraper-strewn city may yet get its La Defense.

Frankfurt's Docklands: The Großmarkthalle site at a bend in the river,
southeast of the city's center, with the existing financial district several miles distant.
The Main Plaza is at mid-center left, behind the bridge.
See Google Earth image at top of post to note how the oxbow bend of the Main echoes the Thames at the Docklands.
Above Image via Wikipedia.

The huge ECB premises, with twin towers pivoting toward each other at an angle connected by multiple, cantilevering sky-bridges between, is dashingly contemporary in its styling. This is the latest iteration of an emerging kinship of such twin-towers, most especially such supersleek developments as the World Trade Centre in Bahrain, which has been mentioned in this blog a few times before. 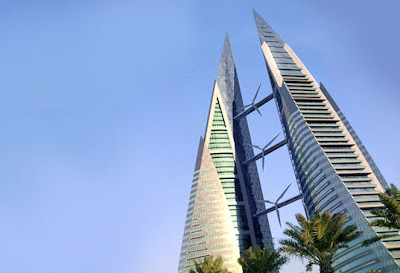 
A fable for our times, the ECB has been working on a substantial new building throughout a crisis which now impugns the very concept of a centralized Europe, which has lead no less than George Soros that Germany should either save or leave the Euro. 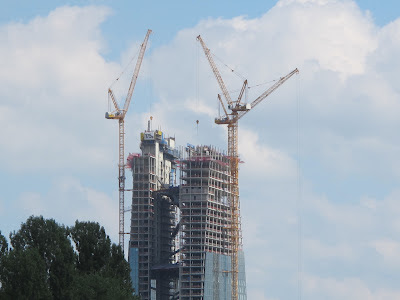 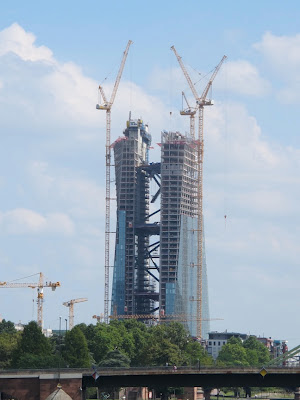 While last week's announcement that the ECB development would be overbudget by 41% was met with exasperated derision and humor, that the ECB seems to be emulating new financial capitals much farther to the southeast from its old offices, the sovereign-wealth-fund federation between Doha and Abu Dhabi, with a glittering, Gulf-like financial center. Rather than recall a more rational and socially beneficial heritage of finance, the ECB's architecture reflects out to the flashy new centers of money. 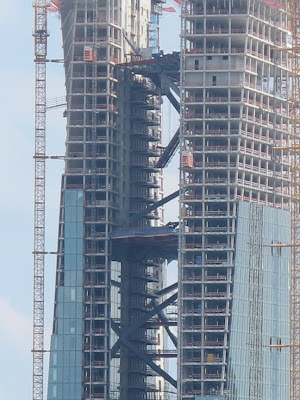 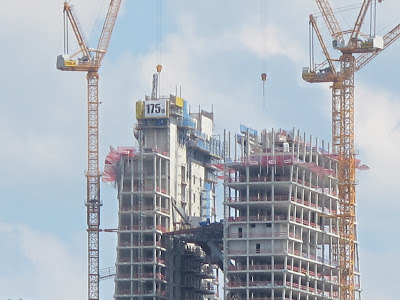 Frankfurt has never been a large city, or at least, never larger by area or population than other German or European cities. Its markets and banks, the vast convention halls of the Messe, and its busy, centrally-positioned airport have made Frankfurt a global city. However, this isn't the same as being cosmopolitan, in the same way that its important book fair is not make Frankfurt a center for literature. As stated in the Guardian earlier this month, even as it has continued to persevere as a global banking center, Frankfurt has never grown into a metropolis.

Despite its under-rated museums and its pleasant quality of life, Frankfurt is only a cross-roads of trade and transport, without the overlay of romance and art that defines London or New York. Its central district holds the late-evening routes of lonely foreign businessmen, not the storied streets of a world capital. Frankfurt may so badly wish to be compared to these sophisticated cities, but it continues to grow by building upward with skyscrapers evoke those duller, more commonplace business districts that are its true peers.