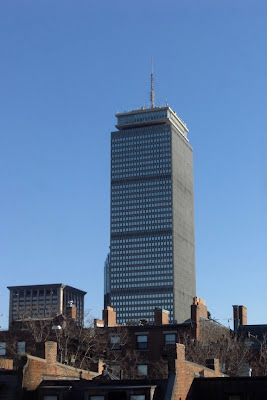 Occasionally, a visit to the bookstore, for those who happen to live in a place where such an errand is even possible, results in a discovery of a newly published book which is unexpected in a euphoric but somewhat devastating way. The existence of a volume on a subject so esoteric that the idea that you alone were interested in it was plausible, is a source of joy; that this insensible idea is dashed by the presence of the book on the shelf is a cause for surprise, and the small lament that you are no longer the lone expert on this particular topic (and therefore, with the discovery of this newly-published book, not the one to write the definitive account of the subject? Perhaps a cause for a small but powerful sadness). 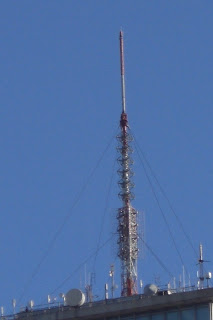 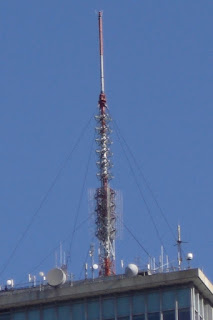 Even if none of that makes any sense, never mind. Here is a book to read: Insuring the City: The Prudential Center and the Postwar Urban Landscape, by Elihu Rubin, published by Yale University Press earlier this year. The book tells the story of the Prudential Center, one of the largest office buildings and commercial developments ever realized in Boston or New England, chronicling the economic, commercial, social, urban, political and architectural thoughts and movements that brought about this unusual tower and the multi acre "Prudential Center" arranged at its ankles in the center of Boston's midtown Back Bay district.

I lived in Boston for many years. It was my first city-- my first time living in a city as an adult. I lived only a few blocks from the Prudential, and in more than one apartment had a view of the silver-grey-green bulk which towered over the red brick and rooftops of the older townhouses of the area. I can't say I came to love the building, but was certainly always fascinated by it, its hideous metallic grille body, its weird, anthropomorphic capital, crowned with dozens of antennae, and embossed with a corporate label as if a slip of paper had passed through a massive typewriter. The building seems to so rudely destroy the historic charm of the Back Bay's mannered, leafy streets, and yet is itself somehow hopeful and silly, broadcasting its simplistic, vintage optimism. 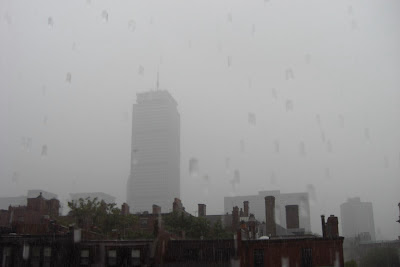 That the Prudential Center is so ignored, unloved and loathed a landmark  in the common estimation of both Boston's citizens and visitors, which was produced nearly 70 years ago by an unappreciated, no-name corporate architect, certainly makes it an unusual subject of a full publication of academic architectural enquiry. That an architectural historian has successfully brought to print a novel-sized volume on not only this building's history but a footnoted account of its creation and execution is equally too infrequent. 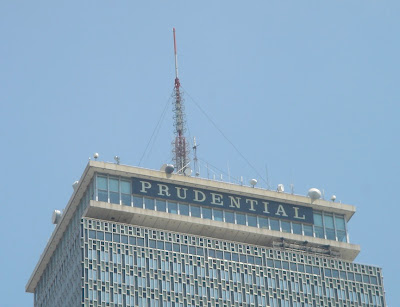 In five thoroughly researched chapters, Rubin details the architectural heritage of the Prudential Insurance Company of America, particularly its nationwide Home Office expansion program, which resulted in striking if rather conservative new office blocks in Newark, Los Angeles, Chicago, Houston, Jacksonville, and Minneapolis. To see a major corporation undertake a multi city building program in the midst of America's urban abandonment, and to have this occur for specifically pro-urban reasons, underscores how different corporate citizenship was seventy years ago from today. For more on this, see the inevitable Atlantic Cities post on the topic, in a review the book from June, which includes a reply in the comments section from the author himself. 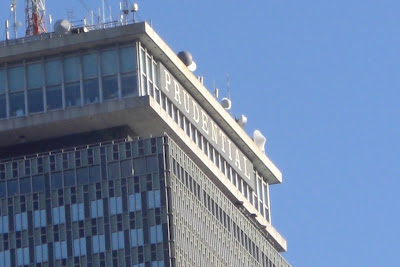 Rubin devotes two chapter to the social and political environment of Boston at mid-century, when a parochial backwardness thwarted the implementation of modern architecture in the historic city, which was followed by a corrupt political machine. The book passes briefly over the sudden, shocking arrival of modernist urban renewal in Boston by momentarily referencing the West End, Government Center, and the Central Artery, all of which involved expunging huge areas of the centuries-old core of the city and interrupting the historic street pattern. It would be interesting to juxtapose these more thoroughly, along with the subsequent Christian Science Center near the Prudential, to show them as one class of similar urban renewal upheavals. 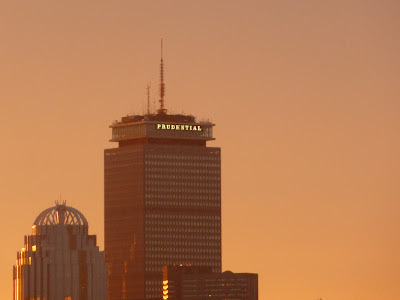 The Prudential from South Boston. ©2012 Bauzeitgeist.

The book stays on topic, detailing the state and local tax schemes which kept the Prudential project alive. The final chapter reflects on the intervening time since the initial construction, in which the towers in the park Prudential Center was first revitalized as an upscale shopping mall, a program which remains in place today to great success, and in the last ten years has resulted in smoothing out the edges of this originally-inward-looking  development. 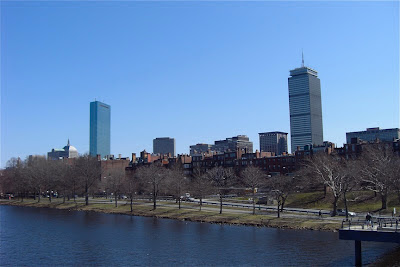 The Back Bay Skyline from the Charles River. ©2010 Bauzeitgeist.

If there is one complaint about the book, its that this ending is rather rushed: although the later 1980s, 1990s, and 2000s additions are mentioned in the last few pages, a more thorough architectural examination of the changes to the character and function of the whole center by these changes would have been welcome. These projects are nearing an end, as the last available spaces in the Prudential Center have been filled in or spoken for, but it is interesting to look at this three-decade maturing and how it reflected changing social attitudes toward city centers, as the modernist plan of multistory retail plazas and prospects, good in theory but dreary and windswept when opened, were internalized into a suburban style mall. A later era, just passed, saw the addition of new luxury condominium towers (there were always luxury apartment buildings on the site) which lastly culminated in the addition of the Mandarin Oriental Hotel & Residences in the mid-2000s, which was not only one of the most prominent developments in Boston during the recent real estate boom, but also created a traditional urban street facade along Boylston street where previously there had been a driveway. 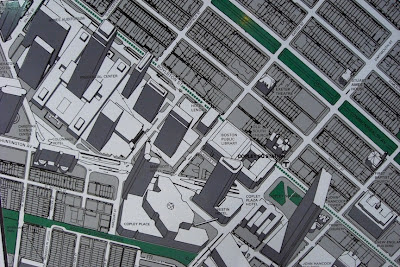 The Prudential Center shown in axonometric on a Transit Authority
wayfinding placard at Back Bay Station. ©2010 Bauzeitgeist.

The only other complaint about the book, and the more significant one: the novel-sized publication contains only black and white photos, and most of these are tiny, and pushed to the edges of each page by lengthy blocks of text. Vast panoramas of the Boston skyline, and presentation drawings that are surely huge in their original form, are  miniscule. This is a shame; perhaps the publication could have done with a series of plates in the center. This would have had the additional effect of showing some affection to the building itself, which remains a prominent landmark in Boston, yet one that is universally unappreciated. 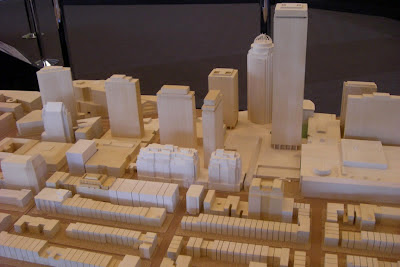 The Prudential in a wooden model of the city of Boston
by the Boston Redevelopment Authority.
The Mandarin Oriental Hotel is the two mid rise blocks at the center of the picture,
to the front and left of the Prudential Tower. ©2009 Bauzeitgeist.

Insuring the City isn't a typical read for any audience: its neither a general interest publication, nor is it the sort of books architects usually buy. Its not theory, and its not a coffee table monograph. Its dozens of pages of text only interrupted by subheadings like "The Bond Market" or "The Pubic Authority Model" or "Toward a Tax Concession." But this is also what makes the book so worthwhile, so important, so relevant, and so recommendable, for if chapters about creating a special purpose vehicle for a major corporation to develop a multi acre urban site isn't the typical book that architects pick up (much less write), perhaps it should be. This, I believe, is exactly the sort of subjects that architects remain ignorant to their own professional detriment: this is the story of how major projects actually get done, in American cities as elsewhere, a tale which is usually the saga of clever developers and willing public officials than it is of architects taking a lead role. In what is left of the summer, I'd suggest this is exactly the sort of book that architects should be taking to the beach.