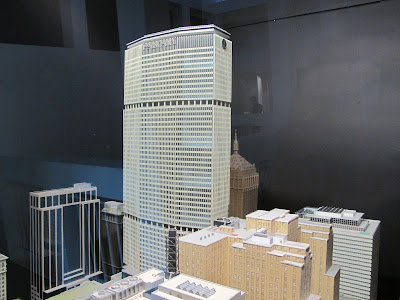 Just a few days after departing Frankfurt, still in an inspired daze from the experiential overload the Deutsches Architekturmuseum's exhibit on building models, I was walking the streets of Munich, but still imagining miniature landscapes of ancient Pompeii or the visionary fantasy of Isozaki's metabolist metropolis. 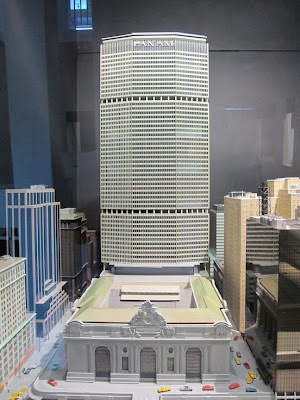 One of the best models, as I mentioned in the post about the exhibit, was the square slice of mid-town Manhattan, bustling with traffic. This realistic rectangle of real estate was dominated firstly by the iconic Chrysler Building, but also by the MetLife building, the bulky brutalist block which has been featured on Bauzeitgeist before when reviewing an excellent book about the building. 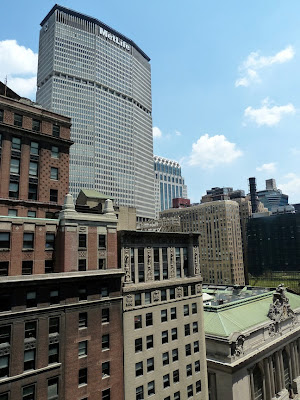 Aside from my admiration for the old Pan Am Building, the much-hated "Monster that Ate Park Avenue," the area around Ground Center Station in New York is of particular fondness to me as it was the old location of the headquarters office for the company that I work for, and it was from my office window that I could look out at the MetLife, the Chrysler, and the station at about the same height as the viewer of the model at the Frankfurt museum. 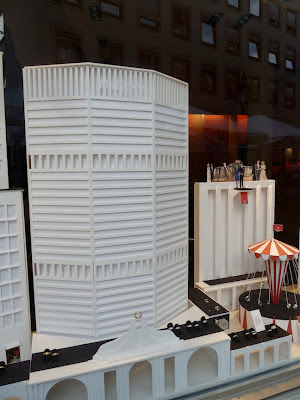 It was therefore startling to encounter the familiar mass of the MetLife. A window of a jeweler in a fashionable street near the Frauenkirche featured a model of midtown, with the Metlife Building broadly featured, a cutout of the archways of the Grand Central at its feet. "MetLife" had been changed to MetLove, but otherwise the old Pan Am had been faithfully recreated--the Chrysler was not included in the scene. As surprised as I was to see a miniature of the building twice in a week in two different German cities, its remarkable that the much-derided building is here used as a recognizable symbol of New York. 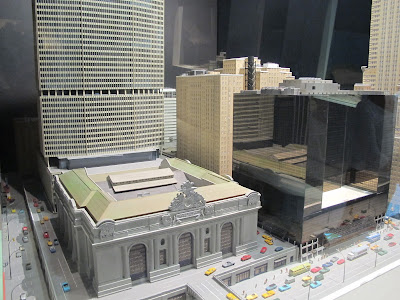 Such careful imitations, even if intended for the utility of accurate depiction, nonetheless seem to yield to some begrudging admiration of the building. I thought about this curious near-irony when looking at the large model of the Grand Central Area at the museum in Frankfurt.

As much as the Pan Am has been long loathed, the dark-bronze Hyatt Hotel to the immediate east of Grand Central Station has been attacked by architects as being equally hideous: critics trot out the old box-the-nearby-masterpiece-came-in trope and decry the reflective-brown skin, which enclosed the old hotel when Trump rescued it from bankruptcy in 1980. 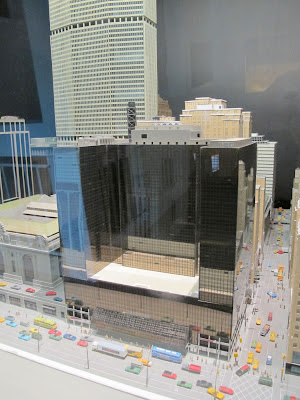 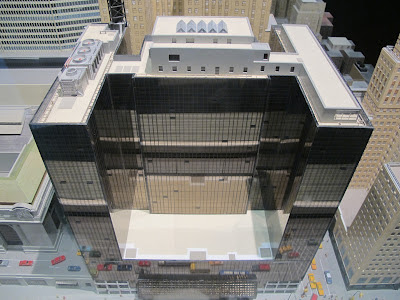 Looking at the Hyatt from a helicopter height, however, even if its is really on a 2nd-floor gallery of a German museum, I could help but admire the care that the model maker had put into accurately assembling the mannequin, and how nice it looked amongst the other buildings of the area, and how little I had paid attention to the building in those days when I was in and out of an office tower across the street.