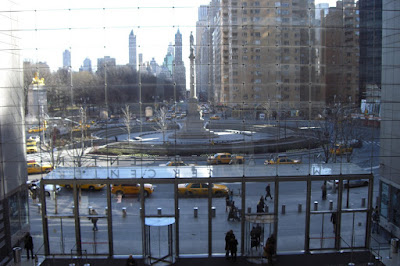 NEW YORK.
The year is only a quarter of the way through, and has already yielded a debut novel that is being highly acclaimed: Open City, by Nigerian-American author Teju Cole.
The book is clearly influenced by the writing of W.G. Sebald, and in many ways alludes to Sebald's masterpiece, Austerlitz. Part of the novel takes place in Brussels, and there is even discussion of King Leopold, discussion of ancestors surviving war-ravaged Germany, passages about the Holocaust, and a number of other discrete references to Sebald's scenery, including mention of crossing the English Channel--the opening scene of Austerlitz.
Cole's novel is very much its own work, however, with a more contemporary, and American (and African) atmosphere, centered on a far less anonymous main character, who in addition to his perambulations across Manhattan and his four-week visit to Brussels, spends many parts of the novel discussing his family and other relationships, including some wonderful passages recollecting a childhood in Nigeria, including Lagos.
Walter Benjamin, Freud, and a number of classical composers are also mentioned. The main character, Julius, is not merely a passively-observing, historical-recollection flaneur, but a young man of color who experiences New York main in terms of his own relationships. These other characters balance the narrative's psycho-geographical musings and are more critical to the action than Julius's wanderings.
These introspective strolls are delightful. Below are two architectural passages, one from the very beginning and the second from near the end of the novel: 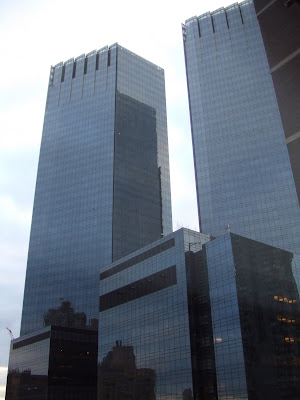 One Sunday Morning in November, after a trek through the relatively quiet streets on the Upper West Side, I arrived at the large, sun-brightened plaza at Columbus Circle. The area had changed recently. It had become a more commercial and tourist destination thanks to the pair of buildings erected for the Time Warner corporation on the site. The buildings, constructed at great speed, had just opened, and were filled with shops selling tailored shirts, designer suits, jewelry, appliances for the gourmet cook, handmade leather accessories, and imported decorative items. On the upper floors were some of the costliest restaurants in the city, advertising truffles, caviar, Kobe beef, and pricey "tasting menus." Above the restaurants were apartments that included the most expensive residence in the city. Curiosity brought me into the shops on the ground level once or twice before, but the cost of the items, and what I perceived as the generally snobbish atmosphere, had kept me from returning until that Sunday morning.

It was the day of the New York Marathon. I hadn't known…To escape the din, which seemed to be mounting, I decided to go into the shopping center. In addition to the Armani and Hugo Boss shops, there was a bookshop on the second floor. In there, I thought I might catch some quiet and drink a cup of coffee before heading back home. But the entrance of the crowd overflow from the street, and cordons made it impossible to get into the towers. --Open City, pp. 8-9 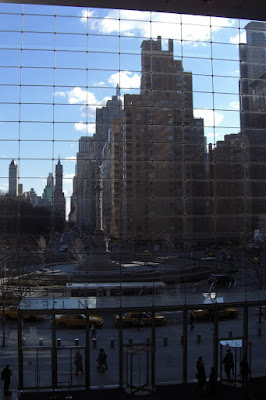 From where I stood, I could see, behind the diner, the massive AT&T Long Lines building on Church Street. It was a windowless tower, a giant concrete slab rising into the sky, with little more than a few ventilation openings, which resembled periscopes, to indicate that this was a building rather than a dense brick fabricated by a gargantuan machine. Each floor was at least double the height of that found in a normal office building, so that the whole tower, intimidating though it was, came to only twenty-nine stories. The military aspect of the Long Lines building was intensified by the thickened corners, elongated shafts with which the building mimicked the form of a castle's keep flanked by gatehouse towers, and which concealed the elevators, ductwork, and plumbing. Those few workers who used the building, I imagined, must after a few years become moles, their circadian rhythms completely distorted, their skin depigmented to the point of transparency. Long Lines, which I continued to stare at, as though it had drawn me into a trace, seemed like nothing so much as a monument or a stele. 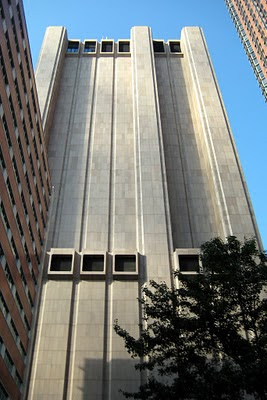